Variables that affect the price of coffee

Coffee is a product that many people associate with the word volatility, particularly with regard to the changeable nature of its price and quality. With improvements in post-harvest processing over the last few decades, the consistency of coffee quality has improved markedly. However, the price of coffee still oscillates enough for the product’s association to the word volatility to hold true. When I refer to ‘the price of coffee’, I have in mind the ex-warehouse price to the coffee roaster. I am not talking about the price of a cappuccino in a coffee shop in London, nor the farmgate price for a coffee producer in Cauca, Colombia. Some of the variables that I mention may impact the London consumer or the Cauca coffee producer, but they will do so to varying degrees. This article is solely focussed on the key drivers that affect the ex-warehouse (EXW) price of Arabica coffee to the coffee roaster, namely: the New York Coffee (NYC) market, export pricing, and exchange rates.

Before we unpack these 3 key drivers and understand how they behave however, I need to mention the difference between ex-warehouse (EXW) and free on board (FOB). These are international incoterms which contracts are based on. As a coffee importer, we buy coffee FOB (named port of shipment) from our suppliers. For example, if I buy Honduras coffee from a supplier my contract is ‘FOB Puerto Cortes’, which means that the seller bears all the costs and risks up to the point that the coffee is loaded onto the vessel departing Puerto Cortes for the UK. DR Wakefield assumes the costs and risks thereafter. The coffee will sail to the UK and then DR Wakefield will bring the coffee to the warehouse we use, ready to be sold. The majority of coffee we sell is on an EXW (named warehouse) basis. As a roaster, the EXW price is the most important price as this is what the roaster will be invoiced. However, during this article we will analyse coffee from an FOB basis as I believe it’s cleaner and easier to track the key variables that ultimately affect the EXW price to the roaster at the FOB level. 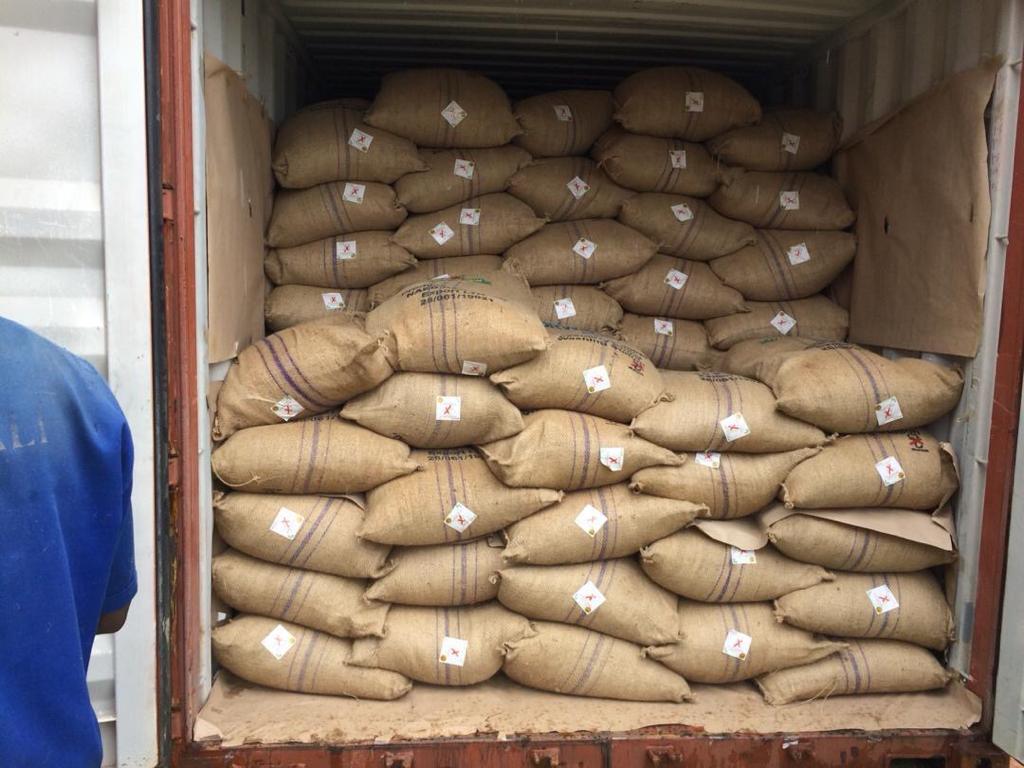 First, we turn to ‘the market’. In this article I will refer to the market as the NYC. It’s the variable that gets the most air time and, due to its volatility and the size of its movements, is arguably the biggest price driver. It’s discussed so much, that people have created numerous words to describe it so as to avoid repeating the same word over and over. This is confusing as they all refer to the same thing- bear in mind you may hear the following when people are talking about the NYC: NYBOT, New York, NY, ‘the market’ and ‘the C’, to name but a few.

Let’s first talk about what the NYC is. It’s a market where companies buy and sell futures (a financial derivative contract) at a predetermined price at a date in the future. The futures are linked to an underlying commodity, which in this case is Arabica coffee (Robusta has its own market). Each coffee future is linked to 37,500 lbs (this equates to 17,010 kilos or roughly 284 bags of 60kg) of physical green coffee, so if you are buying or selling coffee futures, you are technically buying or selling 37,500 lbs of physical green coffee at the agreed price and date in the future. The price of coffee futures is constantly changing (during trading hours) and can move for many reasons. There are many factors that make the price of the NYC change: supply and demand of physical coffee, how local currencies relate to the USD and how the NYC compares to other commodity markets as investment opportunities for investors are some examples. Let’s look at weather. If there is a frost in Brazil and people think there will be less coffee around, you may find many companies will buy coffee futures as they think the price will continue to rise and when they think it’s a good price to sell, they will sell the future at a higher price than what they bought it for. The main point here is that the price is constantly moving and many things can make the price move, weather is one factor among many.

How is the NYC priced though? The NYC is priced in US cents/pound (c/lb) and it’s a market which opens in the morning (European time) and closes in the early evening. Pound (lb) here is the imperial unit of measurement, not the currency. Therefore, if you open up your laptop and see that the market today is trading at 120.15, that means that you can buy or sell a coffee future at the price of 120.15 US c/lb (. That’s the depth of information we’ll go into about the NYC for the purpose of this article. The key takeaways here are that the market constantly moves and it’s priced in US c/lb. You may be thinking: ‘Not all coffee tastes the same so surely it’s not all priced the same?’. That is where the differential comes in to play. 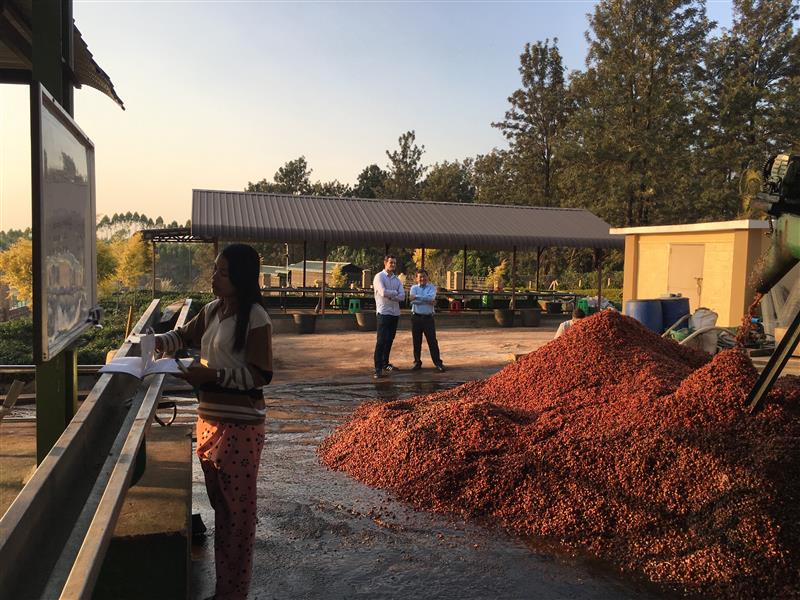 Henry and U Sai Wan (Mandalay Coffee Group) in Myanmar

The majority of physical green coffee across the world is bought and sold on a differential basis. This means the price of the coffee exported is the NYC +/- a differential. Before the coffee leaves the country of production, it must be ‘fixed’, which means that the supplier must lock in a NYC level to allocate to their differential price to get a fixed price which they can then invoice the importer for.

Let’s see how this plays out in practice. Assume the exporter has a differential of +30 US c/lb, and right now the NYC is trading at 100 US c/lb. If the exporter decides to fix (the exporter locks in a specific NYC level) at 100 US c/lb, the final export price will be 130 US c/lb (100 NYC level and a differential of +30). A regular Colombia Excelso could be traded at +50 c/lb, whereas a single estate coffee which cups higher could be traded at +90 c/lb. The difference here (40 US c/lb) reflects the quality difference. It would be simple if differentials were static and stayed the same, but they do not. That’s right, the market moves, but so do the differentials. They can move for many reasons but let’s stick with the frost example earlier.

If I am a Brazilian producer hit by frost and therefore I have less coffee to sell, I will likely increase my export differential to compensate for the reduced volume of coffee I have to sell. Perhaps I was selling at + 30 US c/lb before the frost, whereas now I am selling at + 40 US c/lb. If the market pre the frost was at 100 c/lb and it rose to 130 c/lb after the bad weather, if the producer decided to fix at 130 c/lb, they would benefit from both the increase in the NYC (100 > 130) and the increase in the differential (30 > 40). You can see from the table below some of the scenarios we have mentioned:

Just because one driver is going down (the NYC for example), this does not necessarily mean that the FOB price will be cheaper. If the differential of that coffee has increased more than the NYC has decreased, the FOB price will actually be higher than before.

Furthermore, not all coffee is traded with differentials, some are traded on an outright basis. This means they don’t involve the NYC and are simply offered as a fixed price. Peruvian Grade 1 at 190 c/lb FOB is an example. In theory this means they are divorced from the volatility of the NYC, but in reality, they are linked; it’s a discussion for another article, but it’s worth pointing out. However, fixed prices can still move within seasons and also between seasons. Perhaps the farmer has added 15 c/lb to his FOB price for next crop and the price for Peruvian Grade 1 for next year is at 205 c/lb as opposed to 190 c/lb this year.

Often people refer to farmgate prices and I could have included this as a 4th variable, but for this article I decided to focus on just three key variables as often changes in farmgate prices will drive export prices.

As touched on at the beginning of the article, we are looking at FOB costs here. However, don’t forget that I have picked FOB costs as they are the costs that most impact the EXW price. If the FOB cost is going up or down significantly, this will move the EXW price up or down significantly too. We have covered 2 out of the 3 key drivers, it’s time to put currency in the lens.

Finally, let’s turn to foreign exchange. Coffee is a US Dollar denominated commodity, which means that all coffee importers pay coffee exporters for their coffee in USD. USD is the blood of the coffee industry and will likely remain the unit in which we price our cherished product for many decades to come. This is handy for US importers as it’s one less thing to worry about. However, for the rest of the world, it’s a risk which needs to be managed. The relationship between the US Dollar and the currency of the importing country is a key variable which can make a coffee much more (or less) expensive, depending on the currency pair in question. Let’s take Brexit as an example as it demonstrates a big currency move. If I bought Brazilian coffee at 130 US c/lb before Brexit, when GBP/USD was around 1.4 ($1.4 for every £1), then this would translate to 2.05 £/kg FOB. If I bought that same coffee in 2020 when the exchange rate was at, say, 1.2, then that same coffee would cost 2.39 £/kg FOB.

Yes, that’s right, in this example, in 2020 the same coffee costs 16.7% more than when it did pre-Brexit just because of a change in the exchange rate. More specifically, purely because £ Sterling lost value against the Dollar.

This is why even if the FOB export price is the same year on year, unless the currency pair in question (in our example GBP/USD) is exactly the same, the £/kg ex warehouse price will not be the same. No-one is making more or less money, it’s just the relationship between £ Sterling and the US Dollar which is moving the ex-warehouse price to the coffee roaster up or down. As the USD gets closer in value to the £, the more expensive the £/kg FOB price becomes.

You may notice in the tables I decided to stick to FOB costs. I did this as I thought it was easier to communicate the 3 price drivers that way. Once you do have a £ FOB cost there are all the associated costs (ocean freight, insurance, finance, warehousing etc.) that take it from FOB to EXW, but the purpose of this article was to focus on the key variables that move the price of coffee and I thought it was easier to explain these changes at FOB level as they’re easier to highlight at that stage.

In summary, we’ve explored the following 3 main variables that can affect the ex-warehouse price to the coffee roaster: the NYC, export pricing and foreign exchange. There are many other variables (ocean freight, warehousing costs) which, when they move, will affect the ex-warehouse price of coffee. However, the 3 key drivers mentioned in this article are the ones to pay the most attention to.