Coffee and a Chat with… Introducing the DRWay

Colour has played a role in a number of fields when it comes to food (and drink).  From the influence of cutlery and crockery colour to the food itself, chefs, innovators, researchers and marketers such as Heston Blumenthal, Charles Spence, and Fabiana Carvelho build upon the work done as far back as the 1930’s to 1950’s from people such as H.C. Moir and Cheskin (CHESKIN, L. 1957. How to Predict What People Will Buy, Liveright, New York, NY.).

Pale blue cups popularised through companies like Acme and Loveramics were everywhere  in the early 20teens, following research by people like George H. Van Doorn (Does the colour of the mug influence the taste of the coffee?) It can feel like we have exhausted all the nuances that colour can bring to our daily cup, yet despite this, there is one area less looked at in coffee, and that is the role of colour in creating that flavour in the first place.

For those of us that try to have green fingers in darker flats of dreary winter England, to the more controlled greenhouses of somewhere like Spain or the Netherlands and futuristic vertical gardening startups bringing us our micro broccoli, grow lights are more and more common.

The iridescent purple/red/blue that seems to shimmer out of top flat windows in my neighbourhood at least signifies the importance that the right wavelengths of light reach the leaves that need them so much. This work has been replicated by some in coffee, too- on farms with nurseries and the inclination to investigate the colour of netting has been found to benefit the initial growth and viability of seedlings before heading out to fields, but I had never come across anything acknowledged or created with intention that takes this to the processing step in coffee.

We at DRWakefield have had a great alliance with Daterra in Brazil for a number of years, proud to be their agents in the UK as well as representing them through our European warehouses too.  Known for their great quality and openness in processing coffee, we were thrilled to be the first importer to be allowed in to their ‘Our Plot’ program normally reserved for roasters.

Our Plot takes the simple idea that you cannot own innovation, and realises that on the farm, by inviting roasters from around the world to satisfy their curiosity backed by skilled professionals taking on an idea and digging into it to really understand what is happening, you can discover new ways forward, and help it to become a reality. Generously, Daterra cover the costs in this, but on the understanding that any insights gained are not ‘owned’ by the roaster but are able to be shared by Daterra too. 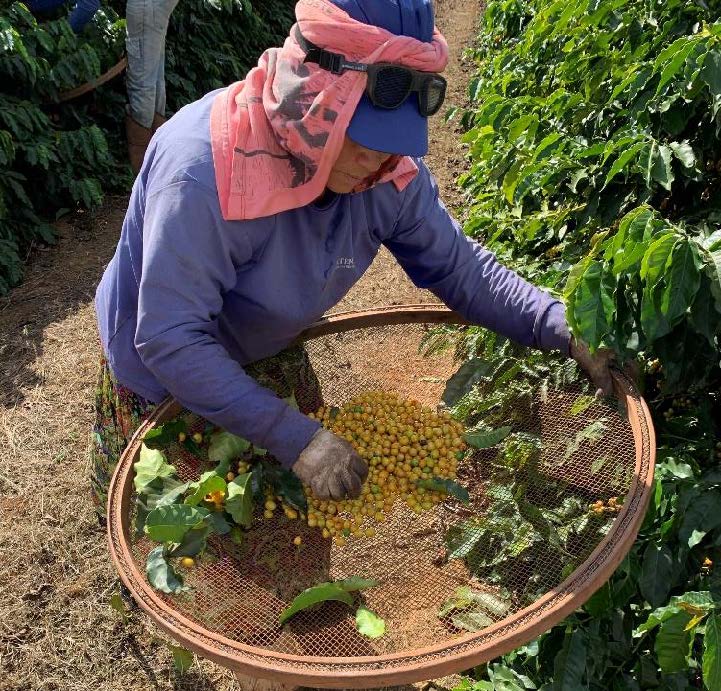 Coffee cherries being picked on Our Plot, Daterra farm

We have seen a number of great innovations come from this -Carbonic Maceration or the Beaujolais process with someone like Café Lomi in Paris, France is a great example, or differing beer yeast inoculation from Climpsons in the UK. In fact, it is through brewing beer and the understanding of coloured glass’s effect on shelf life and flavour properties on beer that was to provide the seed for the idea we were to test.

If colour has a proven effect on growth of plants and yeast, are we able to manipulate this when processing to control elements of flavour on the coffee itself? 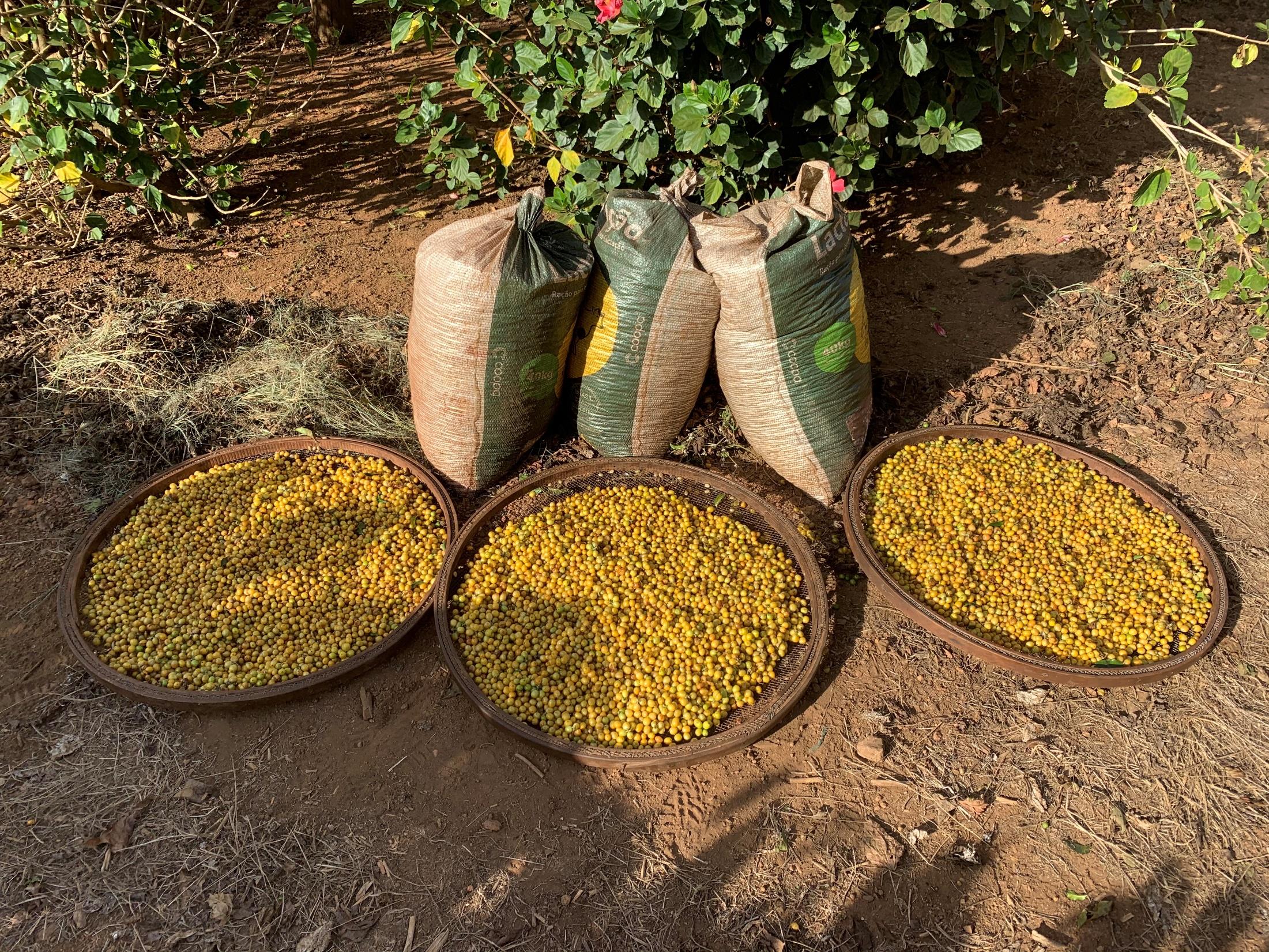 Arara - a natural hybridization between Obata and Yellow Catuai

Taking our first steps into a project of this nature did not come lightly. We had made a short list of areas we found interesting, but felt they also needed to be beneficial to the wider coffee industry and in keeping with our role and responsibility as an importer rather than purely a product that we could sell. Our customers after all would want to impart their roast style or purchase ethos onto whatever coffee would come out of it.

We further decided that whatever we did would need to reflect our values for sustainability and knowledge, so finding a route that would be easily replicable at farm level without a huge spend or the impracticalities of over technical requirements and equipment.

From looking at worm count, grafting (more on that one in a few years!), to positive energy reinforcement or the effects of the light spectrum on fermentation biome, there were a number of ideas.

Speaking with Gabriel Agrelli Moreira at the farm, and involving Diulie Moreira to run and provide the required rigour to the research, we agreed that initial investigations into colour may be an interesting idea to pursue. 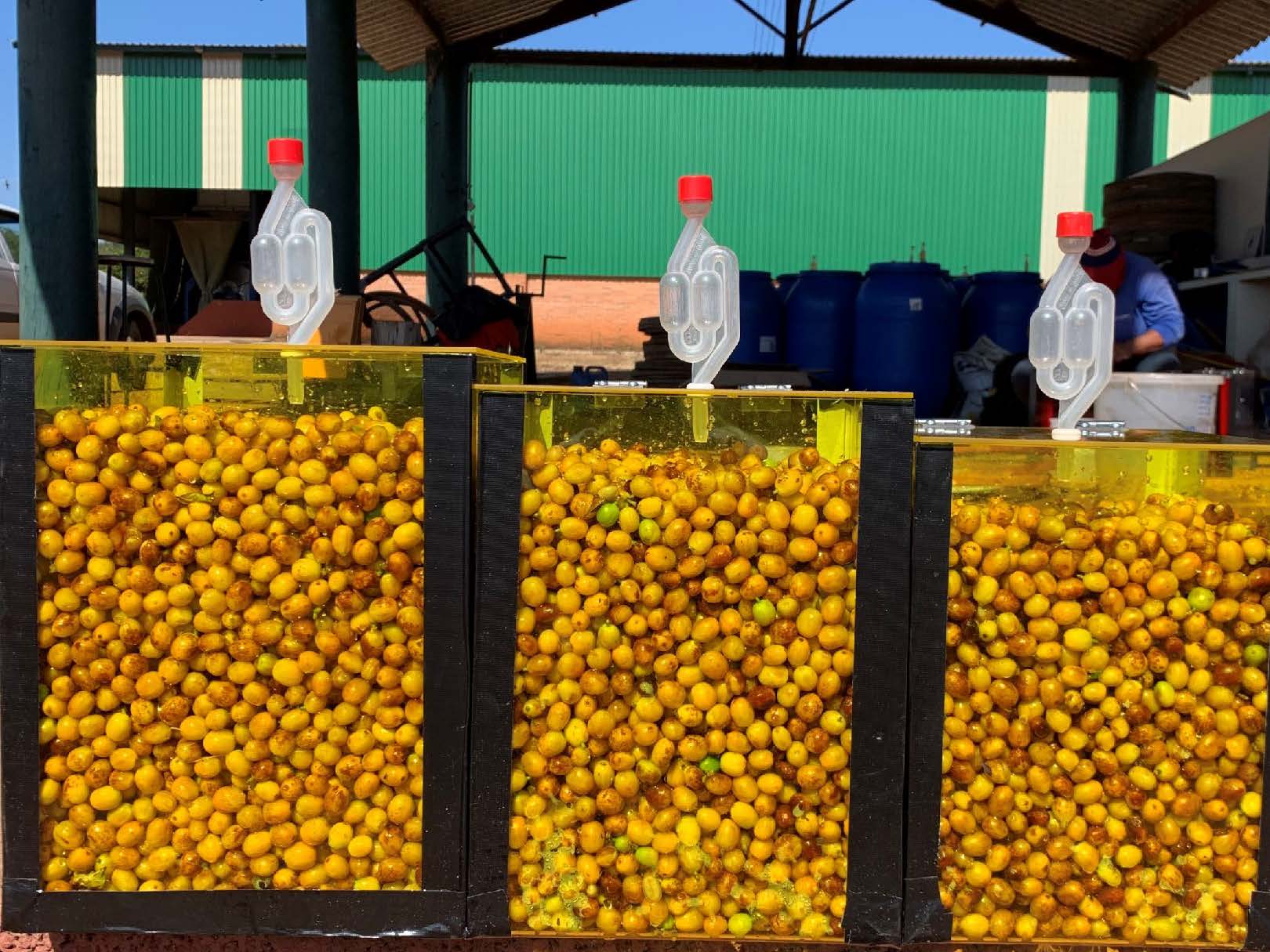 Previously, Daterra had run an experiment in their nursery looking at shade netting, ultimately finding that seedlings were influenced by the colour of the netting used.  They had set their parameters of height, root length and number of leaves, and evaluated these fresh and dried, and concluded there were statistical differences across everything except the leaves.

For our experiment, we selected Arara as a varietal from a number of options Daterra already grow as part of their continual improvements and assessments. This is a natural hybridization between Obata and Yellow Catuai that is highly resistant to rust, has high drought tolerance coupled with high productivity and a good cup quality.  Looking at how climate change is due to effect growing in the Cerrado, this felt important to possess alongside the rust resistance. It has yellow cherries, common with Brazilian coffees, and we’ve cupped this varietal a number of times and found it often grabbed our attention on the table; it became the perfect fit. 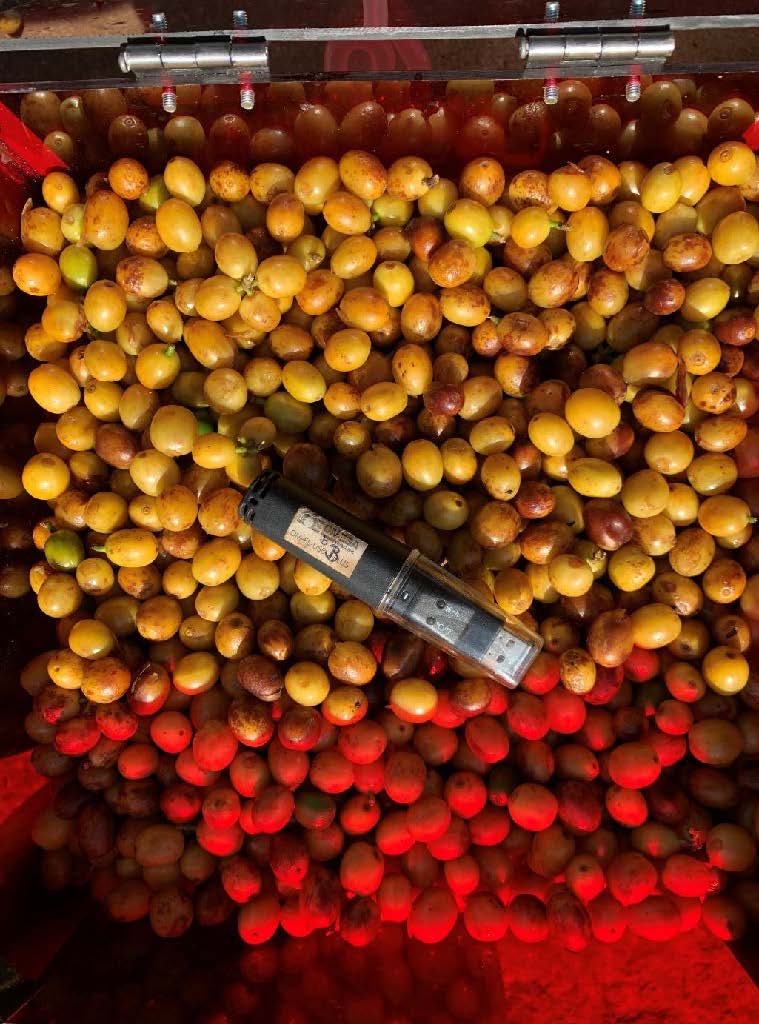 With an initial scan of any relevant research out there, we came together to discuss practicalities. This resulted in a controlled hand–picked harvest, split amongst three replications of the following trial.

We coined the term Solar Spectrum Fermentation to describe our experiment. 6 coloured acrylic boxes were created that would allow the light to filter through in measurable wavelengths, with the exception of one, that would block light. The initial anaerobic fermentation intention proved a bit trickier to maintain so although fully enclosed, coffee was fermented aerobically.

The colours used were red, yellow, green, blue clear and black, and just to make sure the results were reliable, we triplicated everything. 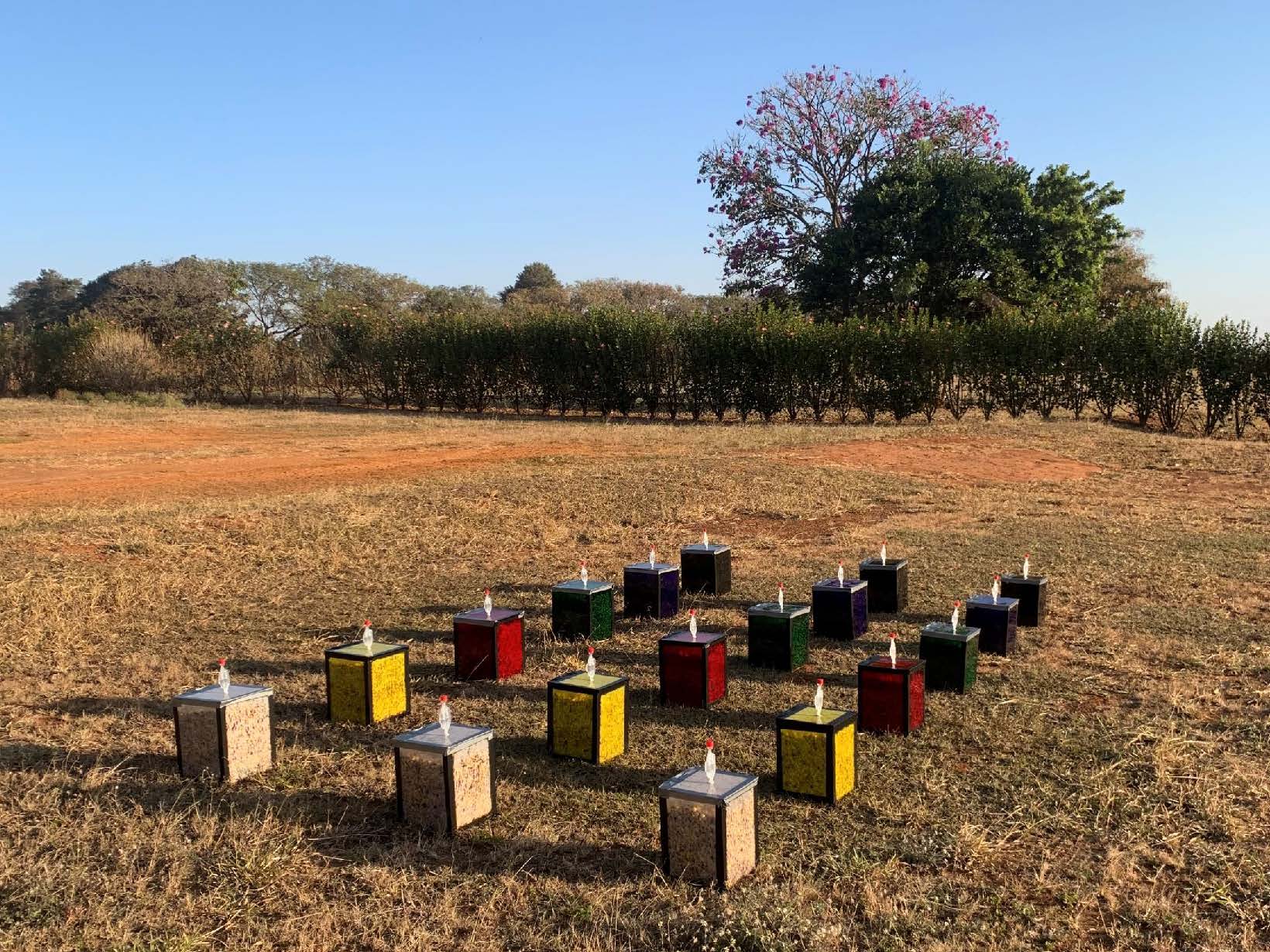 Fermentation time was controlled at 60 hours, and coffee was dried on those round meshes we so often see in photos from the farm.  Samples were randomised so cuppers would not be able to know which sample was which with results evaluated using software and a Tukey test at 5% significance level. 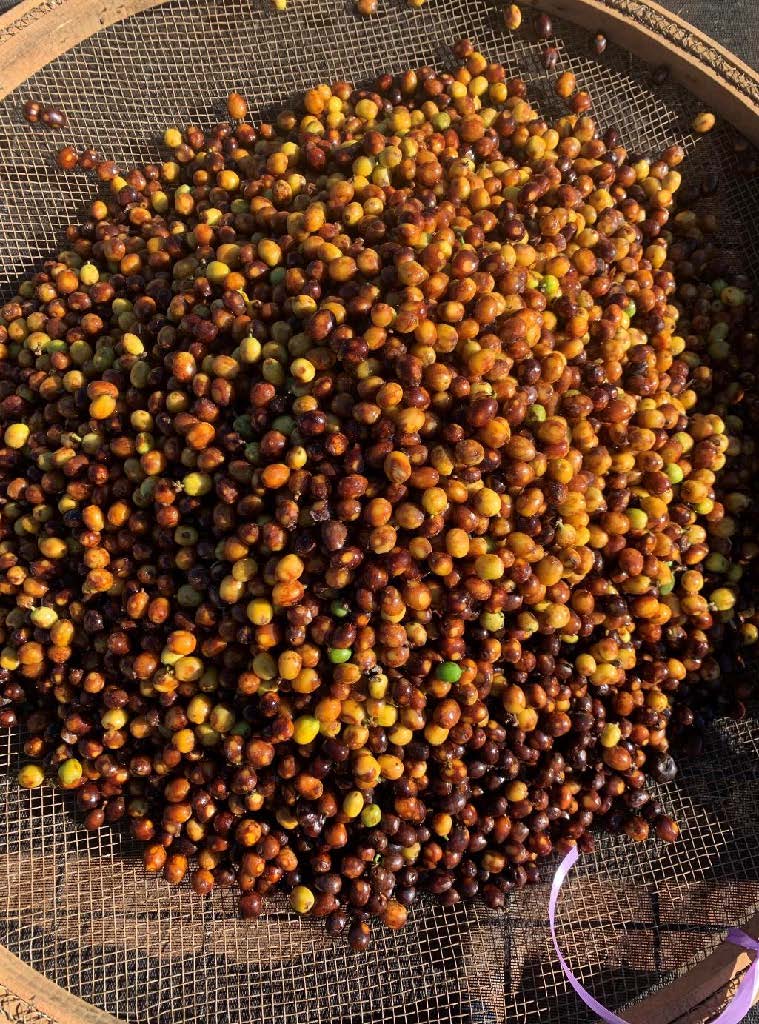 The results that came back were surprising. Gabriel had already admitted he was doubtful there would be any difference but there was, and across all three sets.

The one with no light, representative of tank fermentation particularly prevalent in anaerobic fermentations of late scored lowest of them all, with transparent or no filtration scoring second from last. Taking the results as final scores went, then we found a linear correlation between score and colour.

The longer/larger the wavelength of visible light, the better the coffee tasted. 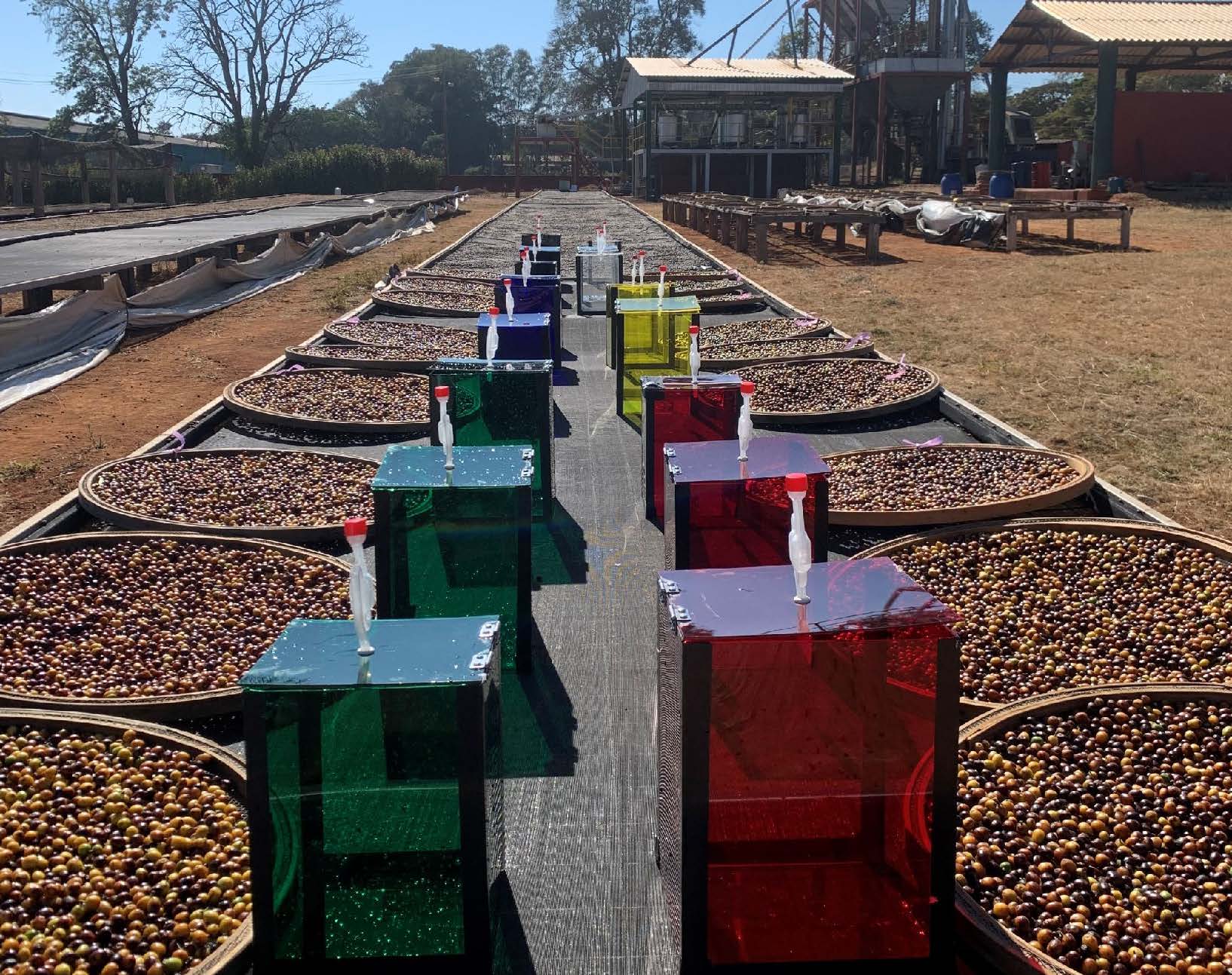 With scores raising from 86.5 to 87.25 (rounded) we are not hugely changing the world here but a gain of .75 at the upper end of coffee processing can have a real impact on pricing. As this is just year one, it has opened up a number of routes for year two, which we are hoping to cup on our next trip to Daterra, in August.

Of course it’s tempting to make some wholesale assumptions on this first year of results, but that’s not how innovation works. We are building on this with Daterra by looking at the feasibility of scaling up,  as well as any flavour/time correlations under the various colours. There has been research that shows yellow and red cherries photosynthesize at different rates and so we’ll need to consider those options too, as well as a few other builds. This definitely has a way to go yet, and we’ll (excitedly) keep you up to date with the results! 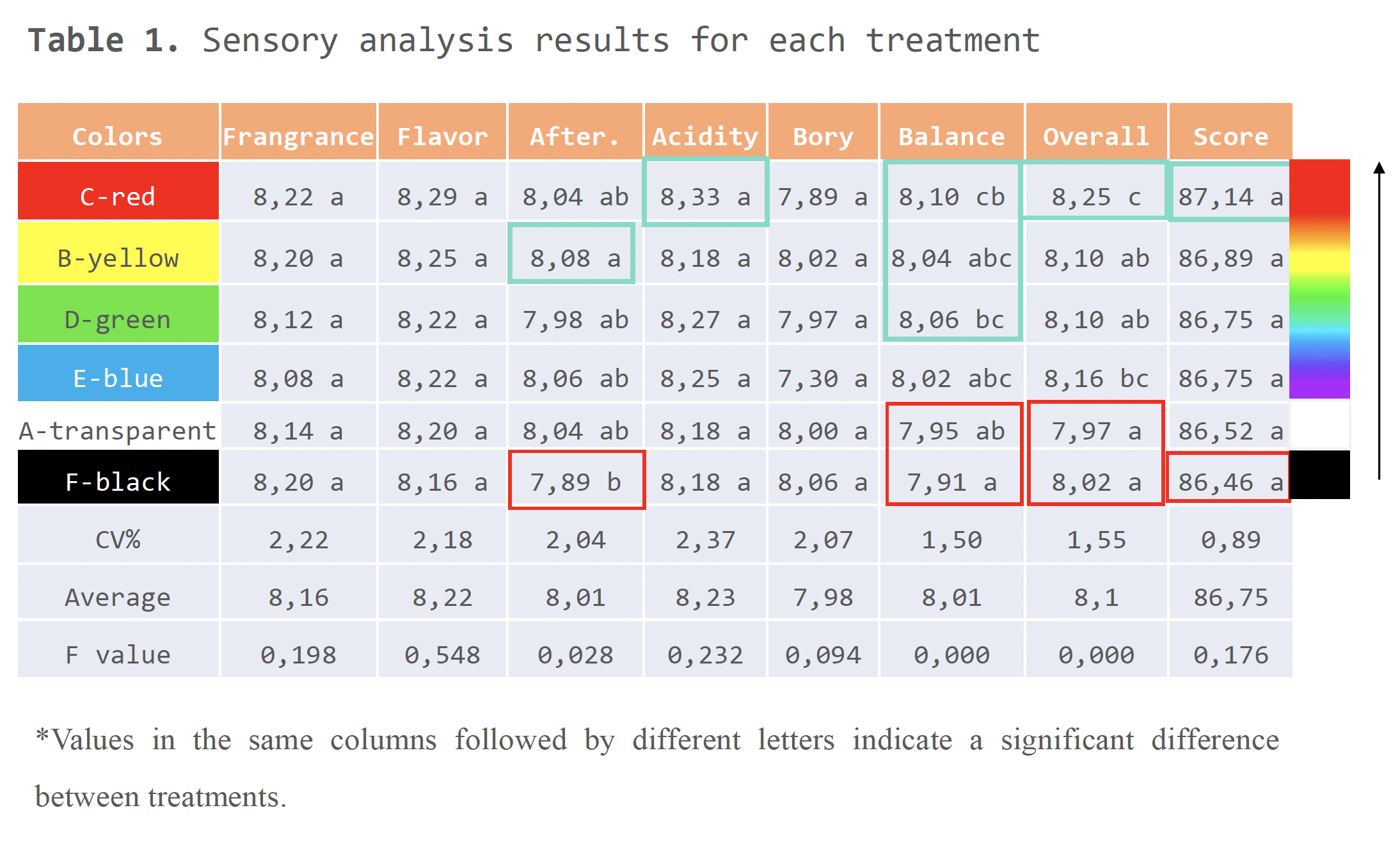