DRWakefield is getting a new… Coffee and a Chat with…

This article is intended to give an overview of Myanmar as a country and our relationships there.

Myanmar’s history and politics are as complex as the cup profiles you can find there. Below is a summary of the recent history of the country and a few fast facts.

It’s a country which is in between the two ‘Super powers’ India and China, and it shares a border with Bangladesh, Laos and Thailand. The country consists of 7 states and 7 divisions. We work in 3: Chin State, Mandalay division & Shan state. 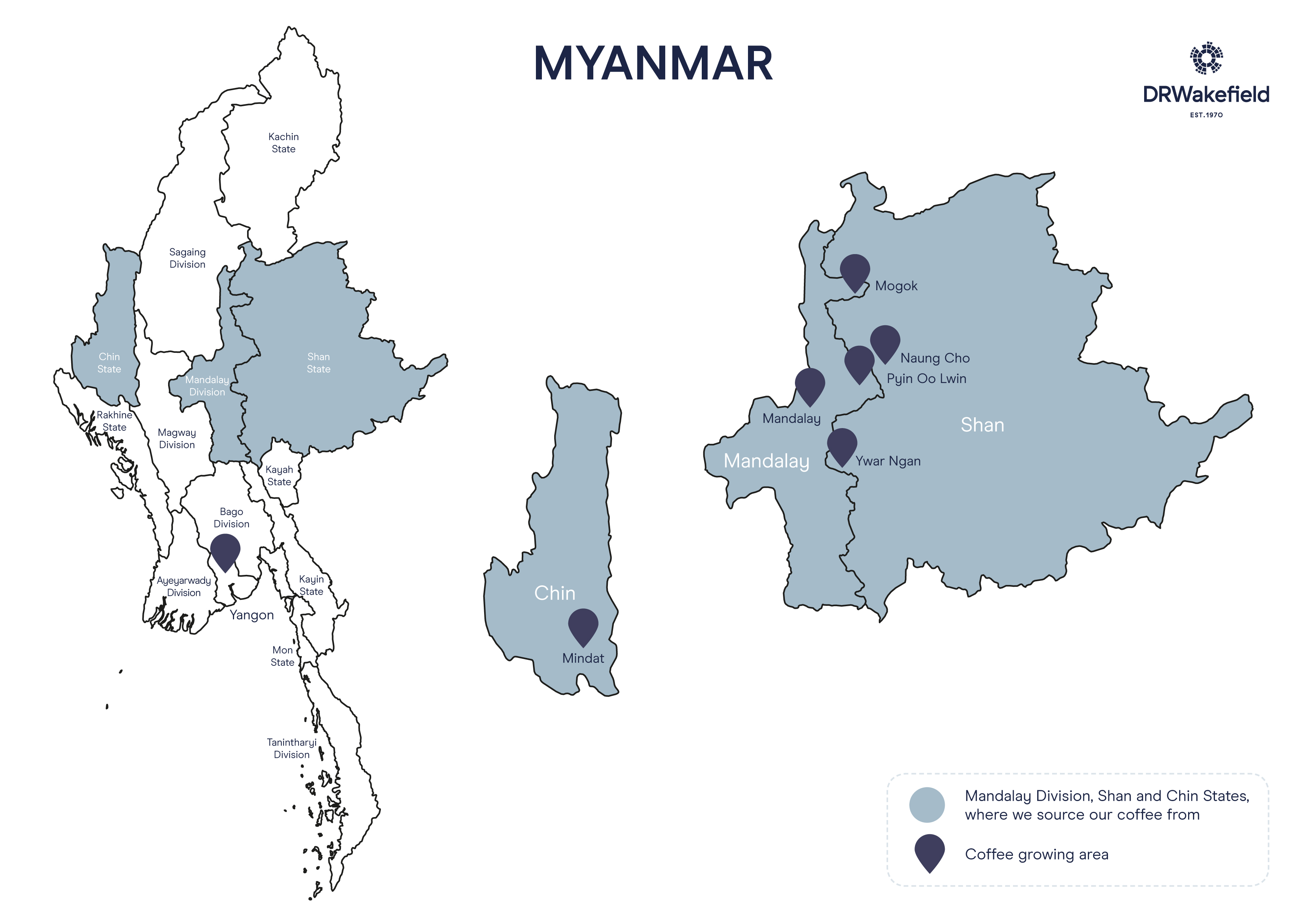 Parliament sits in Naypyidaw (Myanmar’s purpose-built capital) and the party in power is the National League for Democracy (NLD), the party of Aung San Suu Kyi. Because of laws which stipulate that a person who has children who are foreign nationals cannot be president, Aung San Suu Kyi cannot be president. She is however, the de facto leader. The official president is Mr. Win Myint, a party loyalist who is very trusted by Aung San Suu Kyi. Many consider Myanmar to still be in a transition to democracy as the military still hold 25% of seats in parliament before any elections even begin. This was a condition they gave when handing over power in 2015. The military are also in charge of internal security, so the powers of the civilian government is not absolute.

The Rohingya are an ethnic minority group, who largely live in Rakhine state. Rakhine state is in the west of Myanmar and shares a border with Bangladesh. Most Muslims in Myanmar come from the Rohingya ethnic group. The Rohingya have their own language and culture and many live in Bangladesh, on the other side of the border. The Rohingya in Myanmar view themselves as Burmese and say they have been in Myanmar for generations. The Myanmar government view them as illegal immigrants from Bangladesh and do not recognise them as citizens of Myanmar.

The crisis in Rakhine

The crisis is the latest manifestation of a turbulent relationship between the Rohingyas and the Burmese government.  In February 2017 the UN published a report condemning the actions of Myanmar’s army against the Rohingyas. By August 2017 nearly 800,000 Rohingyas had been displaced and were temporarily living in Bangladesh. The conflict continues and up to now no solution has been found.

Who we work with and why

As mentioned, the two-main coffee producing regions are Mandalay division and Shan state. Although they are neighbours, they differ significantly. Mandalay is characterised by large single estates straddling 1000masl and the varieties are typically SL 34 and Catimor. Shan state is at higher altitude ranging from 1400-1600masl, and is nearly exclusively red catuai. Coffee produced there is by small holders from hill tribes.

In Mandalay we work with Mandalay Coffee Group (MCG) and in Shan we work with Shwe Ywa Ngan (SYN). The people behind both organisations have played a key role in developing the Myanmar coffee industry, in some cases going back as far as 1975.

It’s only now that some producers are seeing a return on their investment and a sustainable income from coffee and this is why it is so important to maintain trade and support these people. Coffee is a long-term product and we intend to be working in Myanmar for many years to come.

We work with farmers, not governments. Many of the famers we work with are smallholder farmers who themselves have endured various struggles of their own. Denying them access to international buyers and the opportunity to trade is not a sustainable approach. Our coffee purchases are with people in Mandalay and Shan, we do not wish to punish them because of a crisis they are not involved in and have no control over the outcome of. 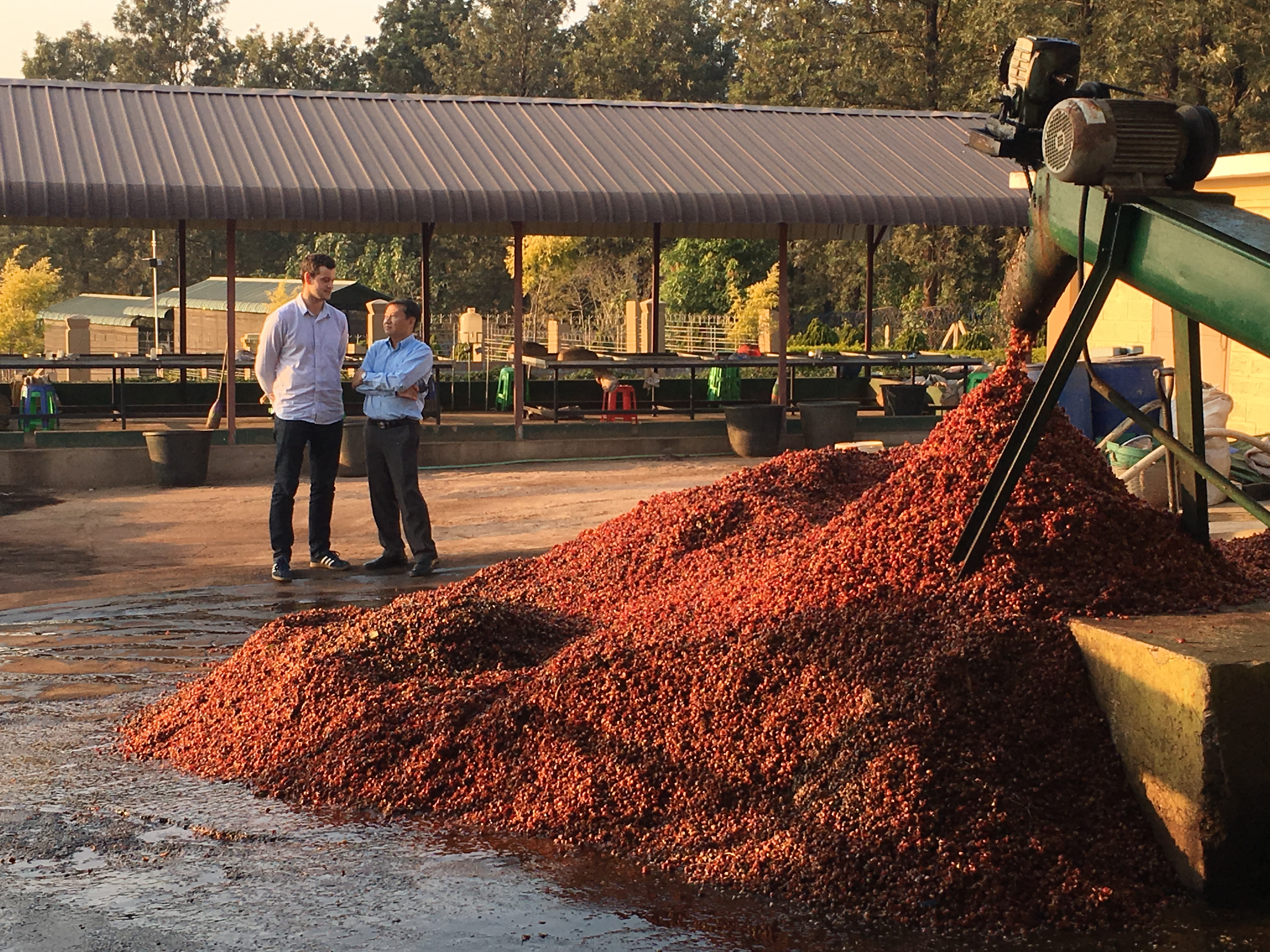 In summary, we believe that the actions of the military should not further punish the citizens of Myanmar. Economic trade will help engender peace and stability and we will continue to support or partners at this origin. Agriculture helps with communities, bringing them together. It is a way to help support human pride and to build long term sustainability. Having visited the coffee areas in 2016 and 2018 we have established some very good relationships. We have heard their situations explained first hand and whole heartedly support their desire to improve agricultural development, which is turn leads to healthy communities and long term sustainability

Please get in touch with the trade team to find out more about our work out in Myanmar and the people with whom we work.