Enter our roasting competition DRWakefield is getting a new…

The beginning of a coffee tree often starts in the nursery, with two green ‘butterfly wings’ as the first signs of life pushing up from the ground and shrugging off the parchment. These young trees are nurtured for the first year of life under cover of light shade in a nursery, either on the farm or with a separate business supplying other farms. Some seeds are taken from better performing plants on the farm, some shared with a neighbour, some varietals bought and sold in the public domain and freely available, whilst others are selections from institutes and research centres trying to breed in disease resistance traits or higher yields.

Seeds are initially propagated around 125mm deep in loam soil, which is a balance of clay, silt, and sand for good drainage. They are watered frequently and often planted during the wet season so that the soil remains moist whilst the roots establish. The root system can extend 20-25km in total length, with one researcher1 noting 80-90% of the feeder root system in the top 20cm of soil, 60-90cm away from the trunk of the plant, though another2 has noted a larger percentage in the 30-60% area, so a good start in the nursery will help the roots to establish. Some trees will be grafted on to a Robusta root system at a later point which spreads bigger and deeper than Arabica and can be beneficial to the plant through drought conditions. When they are ready, the individual seedlings are taken to the fields to be planted.  Often this is done plot by plot, so that the feeding and watering requirements can be controlled, as well as helping to regulate the picking and labour requirements of the farm. The seedlings positioning within the field is chosen carefully, as depending on which varietal is used the yield for the whole field can vary hugely –  compact or dwarf trees can be placed closer together, and therefore have the potential to produce more cherries than a tree that demands more space. The trees are unlikely to produce fruit for the first two years whilst they establish and grow.  Most farms will manage this process by only replanting (or increasing planting), in certain stages, and it is not uncommon to see farms with a field each of 1, 2, and 3-year-old plants as well as mature, producing trees. 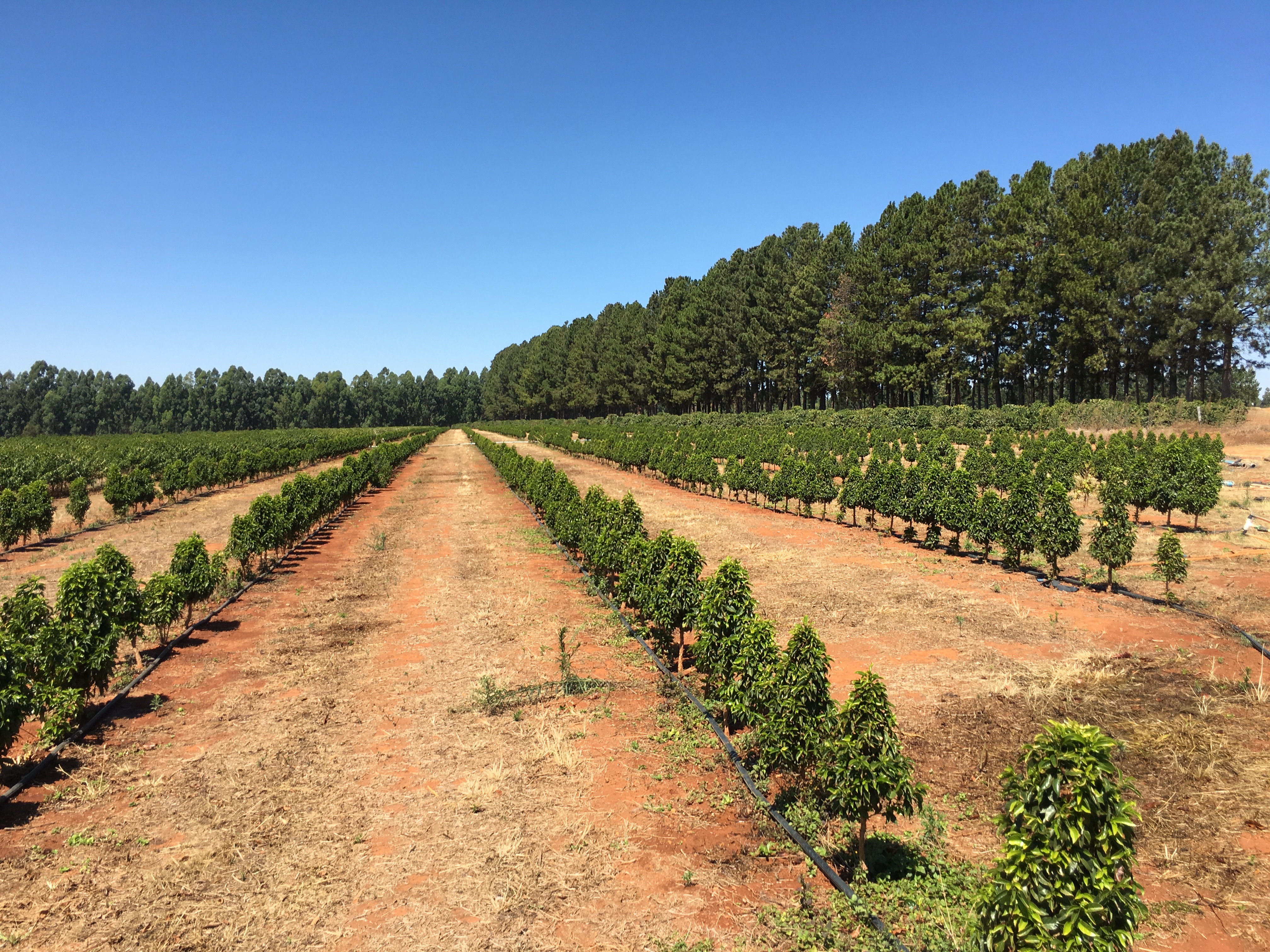 Effects of soil on the plant

The soil pH and nutrients will also influence the plant, from its initial feeding needs through to the course of its productive life out in the field. Changing a soil pH significantly in the long term can demand a huge effort that is not guaranteed to hold, and so understanding the needs of the plant and the effect of the soil on the plant is vital. Different varietals have different nutritional requirements as well as a preferred set of growing conditions, disease susceptibility, resistance, and yields. A difference in soil pH can control the rates of uptake of the micronutrients, and therefore have a greater or lesser effect on the growth of the plant itself.

Effects of weather and climate

Arabica generally grows best under partial shading, originating as a forest plant, whilst Robusta prefers – and can withstand – full sun.  Latitudes further out from the equator with well-defined wet and dry seasons are more typified with a singular cropping season; more equatorial latitudes (lower than 10 °) that have a more continual rainfall pattern will often experience two crops.  A common optimal range for rainfall with arabica is given at 1200-1800mm though some varietals are more developed for drought resistance.

This can be problematic in countries such as Colombia where recent shifts in rainfall patterns have accentuated asynchronous development, so that a flower can share a branch with a red cherry or developing, green one. Flowering is brought on by the relief of the first rains after the plant has become stressed in drier conditions, these flowers subsequently turning in to the drupe that we know as the coffee cherry. The slower, longer maturation periods of beans are heralded as producing more complexity and better qualities of flavours in the final product, so growth and development are vital. 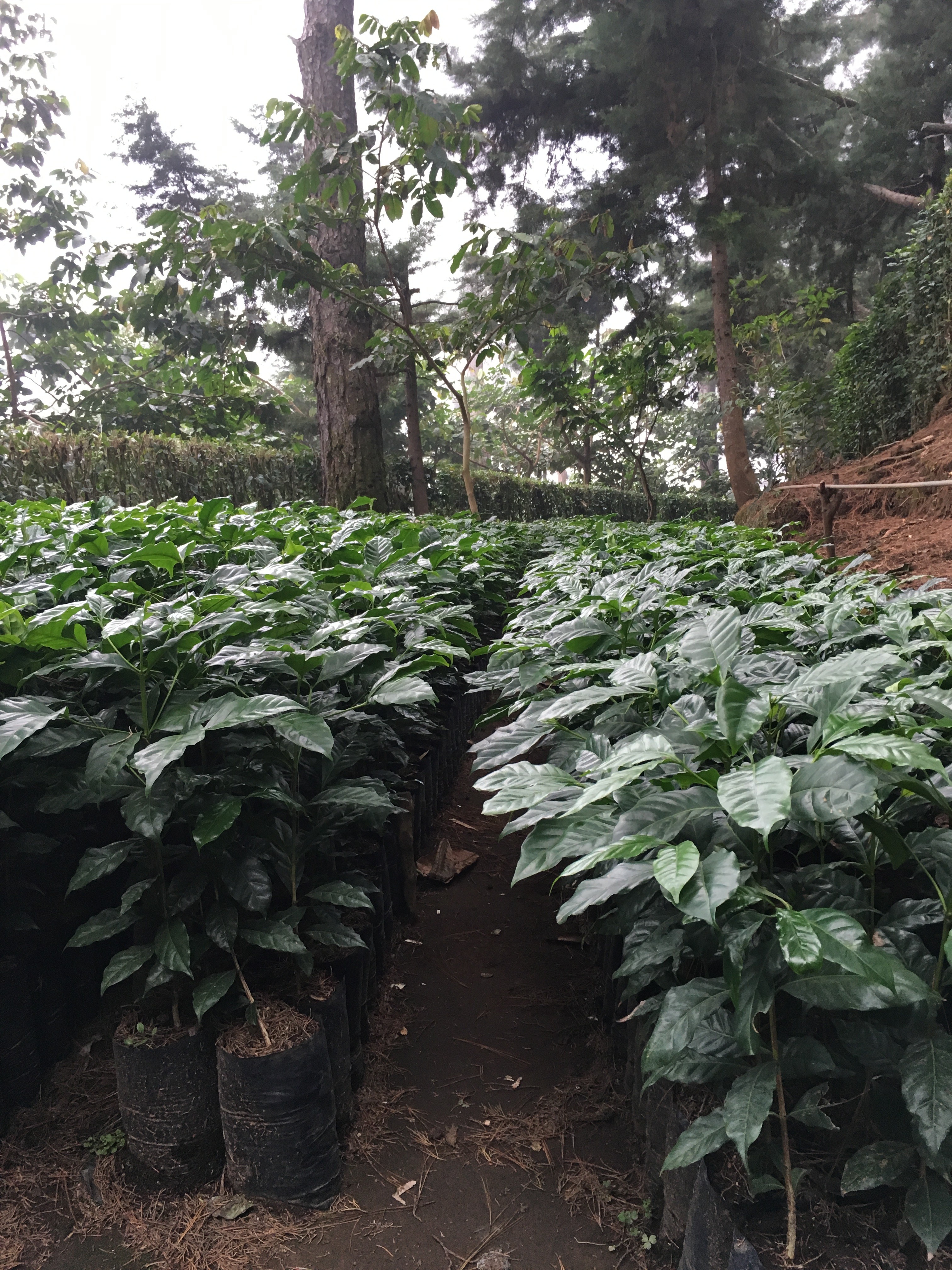 Disease and insect damage are monitored and controlled where necessary throughout the farm. Insect detectors are often seen, hanging in the form of old plastic bottles with liquid in the bottom to attract and trap them. Borers and beetles do damage over ground, nematodes under, and fungal diseases such as Coffee Berry Disease also affect the plant. Rust, a fungus that is increasingly spreading through coffee producing countries and is being talked about more and more, causes orange patches on the leaves and damages the plants ability to photosynthesise and therefore feed the growth of cherries. This, in part, is due to the changes in humidity and weather; Arabica in general prefers less humidity, whilst rust likes more. As climate change spreads the humidity in traditional coffee growing areas changes, forcing the farmers ever higher up the slopes to find the correct balance, and escape the spores.  As is the habit with mountains though, there is only so far you can take this. 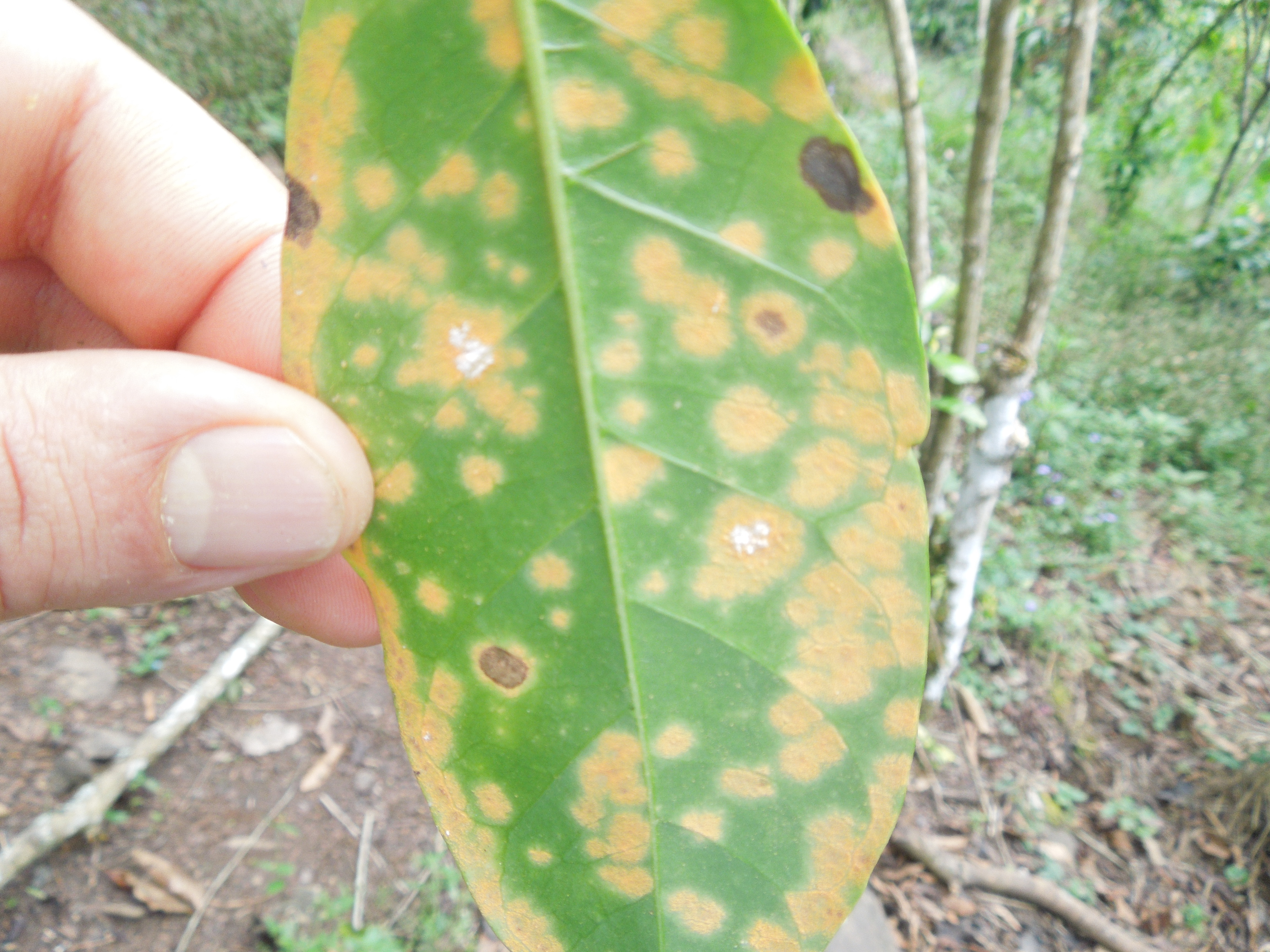 Pruning plays a part too. Like in many agricultural management schemes, many differing practises exist to maintain productive yield, quality, vigour or just to ensure easy access to the ripe cherries for pickers, or the sun for the unripe, especially in ‘shade grown’ farms. Canopy height and species variation all factor in to both the quality of the coffee grown underneath, the nutrient cycle of the soil, the farm management techniques as well as potentially providing an alternative form of income for the farmer, or a vital habitat for indigenous species. The productive lifespan of a coffee tree is given at around 20 years, though the trees themselves have been known to grow for much longer. This means, every twenty years or so the farmer needs to start the process all over again with replanting, giving them the option to perhaps change the varietal to suit a changing market, break a monoculture, or adapt to diseases and climate change.

The alternative to pulling it all up and starting again is stumping, or cutting the tree right back to renew the growth of the plant. Crucially, this preserves the root system of the plant and so enables easier access to water and micronutrients but aims to ensure they are diverted to growing flowers and cherries rather than more wood for an increasing stem. This is done by some farmers every 10 years or so, others as late as 20, and the age of trees on some farms can therefore be estimated by the number of stumps visible.

Industry research and next steps

Farmers across the world will have their own take on best practises, choicest varietals and generally how to grow coffee. This stems from historical associations, education, cashflow, topography and a host of assumptions and assertations. Some countries have their own advisory board to help, others private industry to invest and create new markets.  Some favour robustness of the plant or resistance to disease to guarantee an income, whilst others the cup profile and high prices it can generate.

To this end, World Coffee Research have started a multi locational variety trial looking at 60+ test plots in 23 countries, looking to ascertain if there is a varietal that prefers the soils of Colombia between 1600-1850masl compared to 1300-1600, say. The Castillo/Caturra taste tests conducted by Michael Sheridan during his time with Catholic Relief Services was another attempt to reframe people’s opinions on the ‘right’ type of coffee due to flavour, or to encourage people away from a monoculture in a genepool that is already worryingly small.  Many other labs and institutions are doing similar work internally and externally, and ultimately, it is the small but significant differences in each farm and tree that makes us fall in love with that coffee when we find it.

http://www.gutenberg.org/ebooks/28500 (All About Coffee by William H Ukers)

One of the original books on coffee, old but still great!

An NGO promoting the sharing and use of agricultural training videos in developing countries.

Food and Agriculture organization of the United Nations