Why agronomic research and development… René from Urrutia’s Group talks…

Coffee and a chat with Ian from MacBeans

I was born in Dunfermline, Fife in 1957 and while growing up, and with much thanks to my Dad – who when it came to food & drink was a bit of a connoisseur – I developed a taste for the finer things in life, including that of good quality tea and coffee.

In 1988 when I was 30, I was employed as a ‘Production Chemist’ on board the North Sea oil platform ‘Piper Alpha’. Previous to that I had been employed in the Dutch sector where I further developed my taste for coffee.  On July 6th of that year the ‘Piper Alpha’ exploded, killing 167 workers including my ‘back to back’ (the person who did my job when I was on my two weeks shore leave). Although at the time of the accident I was at home (actually I was in the pub!) the shock of what happened and the loss of so many co-workers was so great that I decided to leave the oil business; I just needed to find another career.

Shortly after the accident I was passing through Dundee, the city where I spent my student days. I decided to stop in by J. Alan Braithwaite to buy some tea and coffee. At this time Alan was the only independent specialist tea shop and coffee roaster I knew of in Scotland. During my journey back to Aberdeen with my purchases I pondered why I couldn’t buy this quality of produce in Aberdeen; that’s when I thought…I’ll do it!

I persuaded a friend of mine, Colin Millum – who was looking for a business venture to get involved with – to back my idea. On the 12th of October 1989 we opened the first MacBeans in rented premises at 3 Little Belmont Street, Aberdeen. After one year of trading we made a massive loss and Colin decided he wanted out. Not wishing to go back offshore I kept ploughing on and in 1995 I sold my house to buy the shop opposite at 2 Little Belmont Street, from where we still operate…now 30 years on from when I first started! 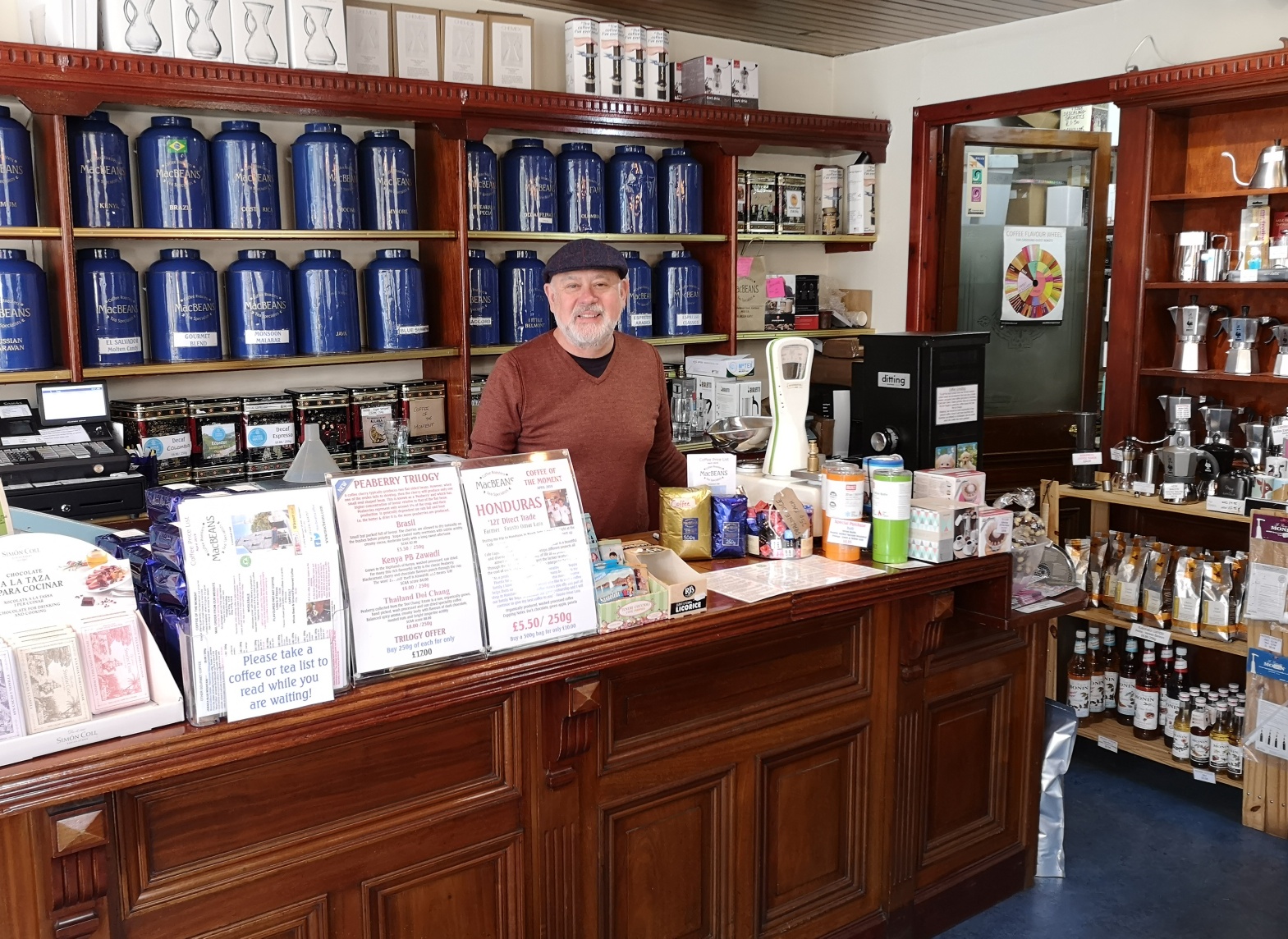 Ian in his MacBeans shop

Bizarrely the name MacBeans came from the description of a steak chilli dish served at ‘Henry J. Beans’, an American style diner based in Aberdeen and one of my favourite haunts back in the day. The strap line for the dish was “there’s no beans in our Chilli ‘cause Beans is in our name!”

This stuck in my head: I also wanted ‘Beans’ in our name, all I had to do to make it Scottish sounding was to add the prefix ‘Mac’ (which actually means ‘son of ’) to it and hey presto, MacBeans was born! Actually, MacBeans is a proper Scottish clan name, and on more than one occasion I have been contacted by someone who, on a genealogy search, had been hoping that they might have found some long lost relative, only to be sorely disappointed by my story!

What’s your favourite thing about living in your town?

I’ve been living in Aberdeen since 1980. It is situated in the North East of Scotland, between two rivers, the Dee and the Don, and is the third most populous city in Scotland. Its wealth was built on traditional industries such as fishing, farming, shipbuilding and trade. However, in the 1970’s all these things were overtaken by the oil industry, where most of its wealth now comes from.

Aberdeen is quite small and easy to walk around, which I enjoy. It’s also famous for the large number of buildings made from locally quarried granite, which sparkles in the sun giving Aberdeen the nickname of The Silver City. Macbeans is based in one of the oldest granite buildings in Aberdeen – it dates from 1787 and is Grade 2 listed.

Where’s your favourite place nearby to visit?

Aberdeen is the gateway to ‘Royal Deeside’ a stunningly beautiful piece of countryside, which on a nice sunny warm day I love to take my little convertible BMW out for a drive around.

My favourite hidden gem is ‘Under the Hammer’, a small pub where I’m to be found most Fridays from around 6.00 pm!

Which is your favourite coffee origin?

What a hard question for me to answer as I’ve been lucky enough to visit several origins. I was on Simon Wakefield’s first ever ‘Coffee Safari’ to Kenya in 1999 and since then I have travelled – always as part of a DRW trip – to Guatemala (in 2001 and 2018), Costa Rica, Brazil (in 2005 and 2017), Colombia, Sumatra, Nicaragua, the Swiss Water Decaf plant in Vancouver, Canada and lastly to El Salvador and Honduras in 2019. Each one was a marvellous educational adventure! Origin trips are easily my favourite part of the business. It’s great to meet the farmers and learn all about the challenges they face – from the single 121 farmer producing only a handful of bags each year to the guys at the massive Daterra plantation in Brazil with all its innovations. The experience I’ve gained from all the cupping sessions done at origin along with meeting various fellow roasters and traders has been invaluable, and quite impossible to replicate without all the travelling done.

Then there’s all the other ‘fun things’ I’ve experienced during origin trips such as: a hot air balloon flight at dawn across the Masai Mara in Kenya; deep sea fishing in Costa Rica; wild Orangutan spotting in Sumatra; Formula 1 and football in Brazil; diving in Colombia; zip lining and salsa dancing in Honduras; plus watching in awe as the ‘Volcán de Fuego’ volcano in Guatemala emitted regular puffs of smoke just weeks before it’s major eruption in 2018. On a final note, all the local foods eaten, beers drunk, cigars smoked and laughs had, make it impossible for me to choose a favourite origin.

I don’t really have one. I think there are merits to them all and it depends on the coffee, the time of day, and where in the world you are. At home, I mostly use the Aeropress or French Press due to factors of time & convenience.

First thing in the morning I like it with a spot of milk. At work, I take it black made either in a Chemex or as an espresso. When I’m out delivering coffee to my friend Craig Adam at ‘Kilau Coffee’ in Old Aberdeen, he regularly makes me a cheeky wee Macchiato …which is always divine!

I’m in the shop six days a week, but generally not for the full eight-hour shift. I live next to the River Dee, so I usually start the day by having a long leisurely walk along its bank and through the adjacent Duthie Park with my Jack Russell terrier Tootie, whilst sorting out the ‘big issues’ of the day with some fellow dog walkers. Most evenings I’m at home with my better half, Claire, and daughter Amy: I’m a bit of a current affairs junkie so tend to watch too much TV news, although we do love a decent drama, generally accompanied by some cheese & wine! Monday evenings Claire and I go to a Yoga class which, to be honest, I should have started forty years ago.

What would you be doing if you weren’t roasting?

Where was the last place you travelled to?

What was the last book you read?

A Fabulous Creation: How the LP Saved Our Lives by David Hepworth: a wonderful book about the glory days of vinyl … set around the time when I was a teenager and spent all my spare cash on records.

What’s your biggest passion or love?

Apart from my family, business and dog, it’s food, drink and music but just the good stuff mind!
I’m definitely one of those people that live to eat and not eat to live. Over the past 10 years I have amassed a wonderful whisky collection, which I may have to start drinking soon!

How and what do you do to unwind? Maybe you have a tip for our readers

Have a dram, walk the dog, play a little bass. Best tip, Carpe Diem, you never know when it could be your last! Finally, take up yoga while you’re still young 😊