Coffee and a chat with… Easter Opening Hours

Coffee and a Chat with Dave Stanton of Crankhouse Coffee

This month we spend a little bit of time getting to know Dave, owner of Crankhouse Coffee in Exeter, United Kingdom.

Tell us a bit about you and your roastery

I’ve done a few different things work wise. My degrees were in Engineering and Robotics but I never really followed through with that. I then speant some time in IT and a short spell as a massage therapist and some summers as a bike guide following the Tour De France, but it wasn’t until coffee found me that I felt I had a path to follow. This and riding my bike, when I get the chance, are my passions.

Crankhouse is in it’s third location since I started the business. Initially it was in my garage, then a converted barn on the edge of Dartmoor National Park, and now a roastery-cafe in Exeter’s West Quarter. It used to be Exeter’s main post office once upon a time (amongst many other things) and has a great history.

I partnered with a friend Tony who wanted to run a cafe, and so created Basement 130. It’s a showcase for my newest coffees and is a fabulous space. Tony’s partner Rosie is a great baker – her cardamom buns fly out the door!

I started the business back in 2014, after a couple of years of doubting if I could actually make it work. I had the idea  way back when I was living in Australia and saw some amazing cafe’s and roasteries.

I remember visiting Sydney and going to Single Origin and Mecca Coffee and being inspired. A cyclist friend was home roasting and selling his coffee to a local bike shop and gave me a book about Brisbane coffee legend, Phil DiBella called ‘Roasted Passion’. It was a lightbulb moment.

There have been lots of inspirations along the way: people, places and experiences. 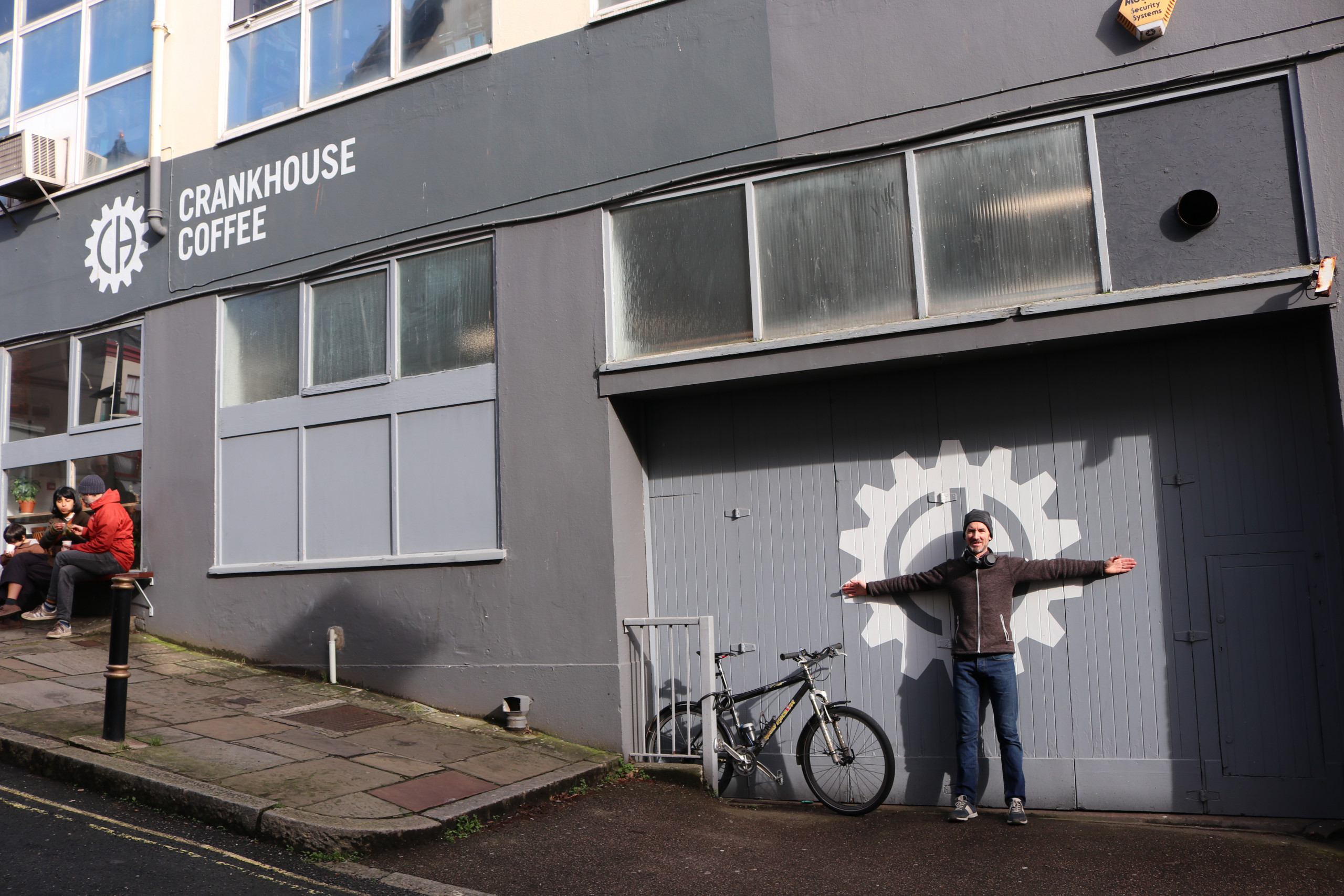 Well, my wife (Becca) has most of the credit for that. When we lived in Brisbane, Australia, I’d fallen in love with coffee, really as a consequence of riding my bike every day and racing every weekend.

The Coffee and Cycling culture is incredibly intertwined and the passion for coffee really came about by osmosis. As that passion grew over a few years a seed was planted by a friend who suggested I open a coffee shop…(and he would fund it). I wasn’t brave enough to take him up on it. But that seed started to germinate.

About that same time a new bike shop opened in a nearby suburb called Crank House Cyclery, and as we rode passed one day Becca said.. “Crankhouse”… hmm that’s a good name for a coffee business. It stuck.

Tell us about your coffee career and your role at Crankhouse

Before landing back in the UK I’d been in contact with Tom Sobey from Origin and Andrew Tucker (then of Boston Tea Party) and they both gave me the same advice. Get some barista experience and see where it leads.

So, I worked a couple of years as a barista in a few of Exeter’s cafes to learn about coffee and service and by then I was absolutely hooked. The cafe I worked at were a Monmouth account and I went up for a days espresso and milk training to their London roastery. Whilst there I met the head roaster and one of their green buyers. When I mentioned I wanted to start my own roasting business they both said ‘GO FOR IT’. I bought a home roaster and started giving, then selling coffee to friends and their friends… and so it started.

At Crankhouse I buy the greens, roast the coffee, pack the bags, write the blog posts, post the social media and sweep the floors. Oh, and I send out the invoices and chase the unpaid ones (when I have the time and energy). 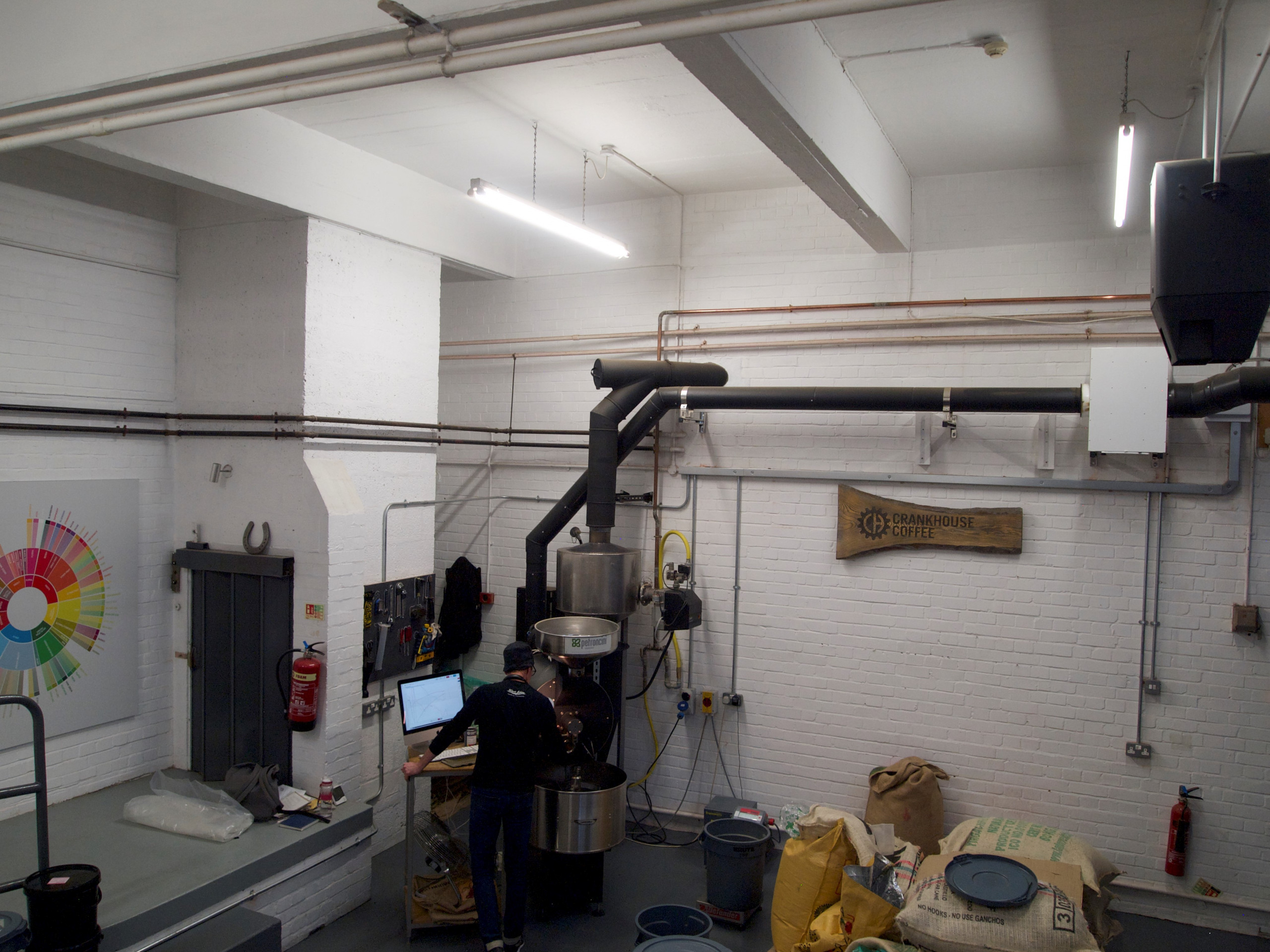 What does a typical day look like for you?

First things first, when I get in, I turn the roaster on. The warm-up is a crucial part of obtaining thermal stability in the whole machine, from the front plate to the top of the exhaust stack. Even though it’s a small roaster I allow a good 75-90 mins which starts with a slow heat build-up then holding at just above operating temperature before it’s ready for the first batch. It cannot be rushed. That warm up time gives me a chance to get the orders on the board that need fulfilling, cup some new coffees, do a little QC and start prepping bags for packing. Then it’s 4-ish hours of roasting, then packing to make sure all the orders are ready for the daily post run. Then dealing with wholesale orders, sample roasting, cleaning and tidying the roastery.

Since it’s my business the evenings are for admin, invoicing, website stuff, blogs, ordering supplies and answering customer queries.

We hear you’ve also competed on the coffee scene? What was that like?

I’d been following the competition scene for a while, from the point I realised coffee was for me. We arrived back in the UK at the beginning of 2012 and I’d heard that the regional heats of the UKBC’s were going to be in Exeter so popped along to take a look. Met a few people and witnessed a confident, eloquent and well rehearsed chap called Maxwell somethingorother. Superstar right there.

I liked the energy and comradery around it and in subsequent years sponsored a couple of local baristas in the regionals and one made it through to the finals of UKBC, and another took the English Aeropress title. Not that I had anything to do with their performances. All down to the competitor on the day. I’ve always been competitive and wanted to have a go myself and managed to get a spot in the 2019 UK Roasting Championships. Incredibly tense two days and definitely pushed me to be a better roaster and up my all round coffee game. Some incredibly knowledgeable and friendly roasters from all over the UK and sharing a beer or three was a highlight.

When COVID-19 put an end to coffee competitions for 2020 I was disappointed not to try and improve on my 5th place. It gave me an idea that I could put together a friendly informal roasting competition amongst UK roasters. I thought I’d get about ten roaster friends interested but that soon blossomed to 20.

A competition is nothing without someone to judge and luckily John Thompson from Coffee Nexus who I’d done my green and sensory intermediate SCA courses with was up for it. He got a little judging panel together including Mat North, Lisa Lawson and your own Diana Johnston. All the competitors received 5.1Kg of an unknown green coffee, 100g for sample roasting and 5Kg for a one-off competition roast. Based on the 100g sample the roasters had to submit a detailed roast plan and sensory description of the coffee. Then 1Kg from the 5Kg batch which everyone roasted on the same day on their own roasting machines was submitted. John coded them and sent them to the other judges for assessment. It was great fun and we formed a nice friendly WhatsApp group which was energising. I had some very nice feedback from some of the roasters for organising the event. 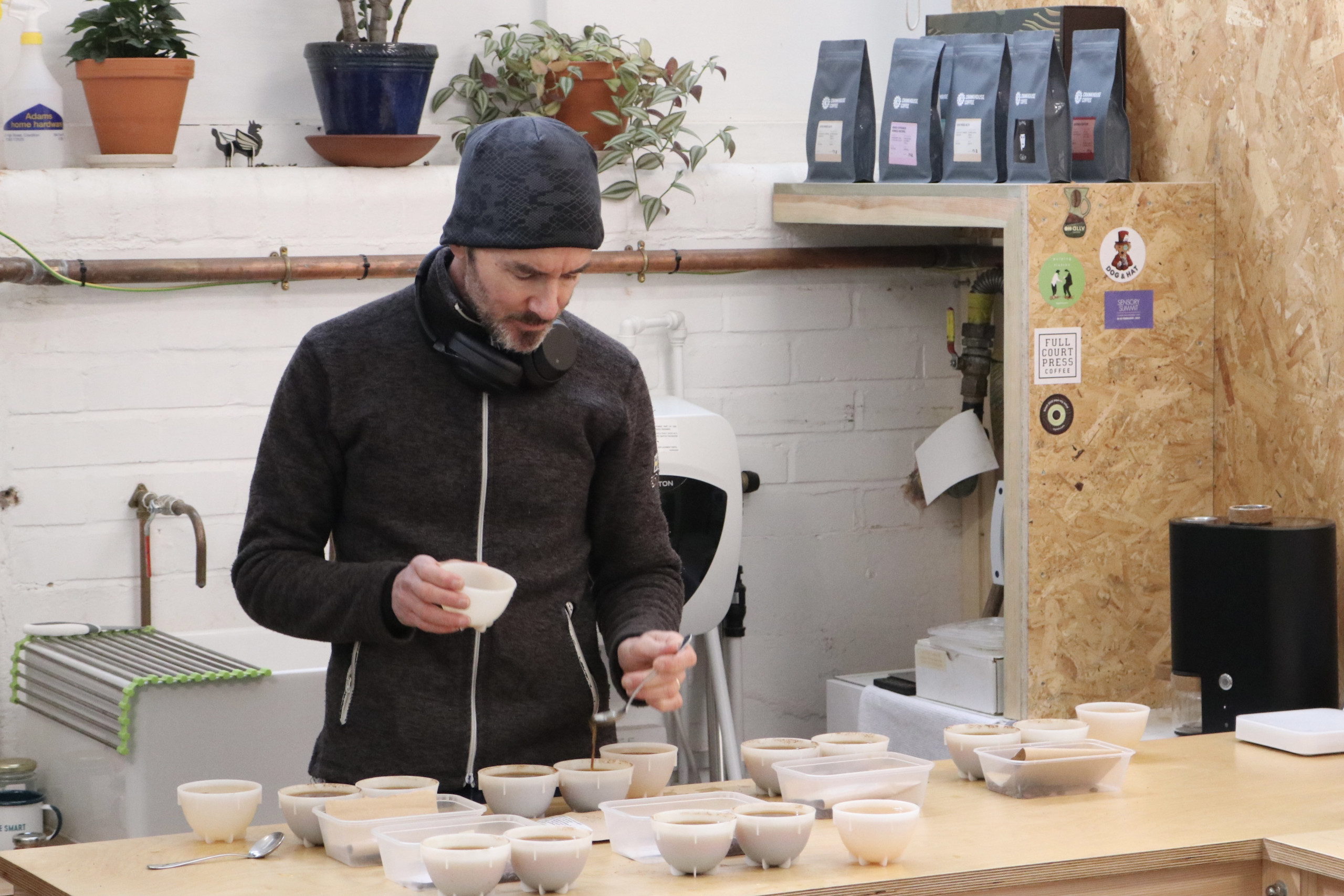 What’s your favourite thing about living in Exeter?

Exeter is not too big, not too small. We’d been once before back in 2008 for a week when Becca had a post-doc travel scholarship and I tagged along. I rode my bike on Dartmoor every day and we fell in love with a pub (we missed them so much living in Australia). So, nice pub, nice countryside for riding, University town etc. Ticked all the boxes.

Where would you head when you have time / a day off if we weren’t in a pandemic?

Probably out on the bike to Dartmoor or Exmoor or along the Jurassic Coast. All spectacular and hilly. 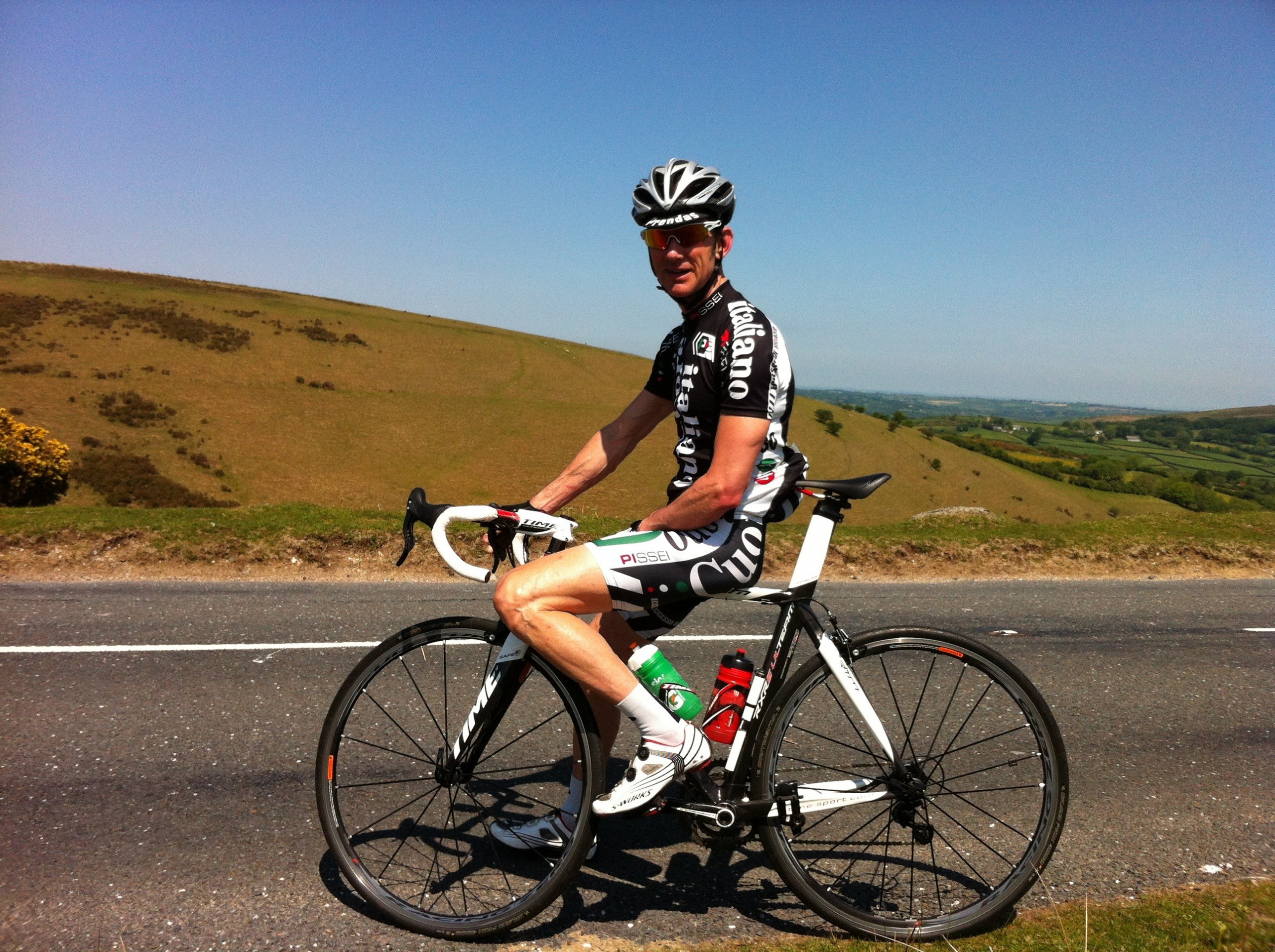 The Almond Thief down in Dartington near Totnes. Incredible bread and pastries and their coffee is pretty good too 😉 Their cafe served (and will do again) some of the most delicious breakfasts and brunches. It’s worth the journey for sure. We’ve got a craft brewery down on the Quay called Topsham Brewery with a lovely outdoor area and then there’s PIZZA at The Flat just up the road from the roastery. Open kitchen and all incredibly fresh Vegan and Vegetarian.

What have been the biggest learnings that you’ll be taking into 2021?

There are no certainties except the love and support of your friends and family.

What are you most looking forward to in 2021?

Learning some more. Being able to visit Daterra in Brazil and Cafe Granja La Esperanza in Colombia with DRWakefield…maybe. I’m also building out a training/sensory lab space at the roastery which I’ll open for classes and enable people to find out more about this amazingly complex beverage.

What’s been keeping you grounded?

My wife Becca. She is my rock. 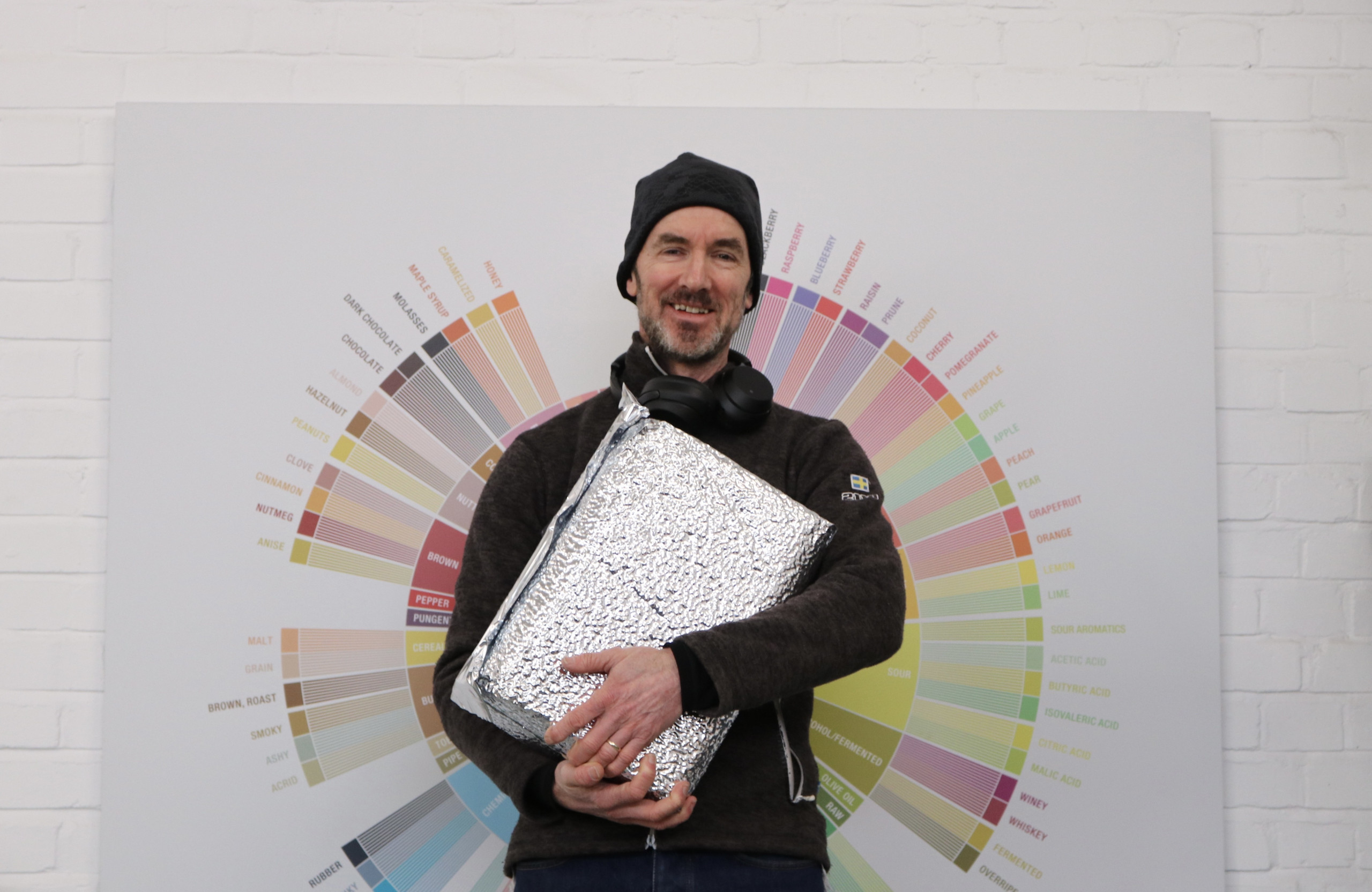 You can always be/do better.

First thing in the morning I like to brew myself a Flat White. Then the rest of the day it’s likely to be a quick filter in between roasting and packing.

What’s your favourite origin and why?

If you’d have asked me a couple of years ago I would probably have said Ethiopia. But I’m a Colombian convert. I reckon you could base a roasting business entirely on Colombian coffee from different regions with different processes and flavour profiles. There’s something for everyone in Colombia. I really really want to visit Cafe Granja La Esperanza with you.