October has been another politically tumultuous month here in the UK. In the September edition of the Origin Focus, I was writing about our new Prime Minister Liz Truss, and here we are a month later with a new Prime Minister: Rishi Sunak. Let’s hope this trend doesn’t continue next month. In the immediate aftermath of Liz Truss’ resignation, the Sterling rallied slightly against the dollar, which only continued during the short leadership contest that ensued. Everything is relative though, and the Pound Sterling is still at historically low levels despite its recent strengthening.

The weak Pound, soaring inflation and the high price of gas going into winter has led to a recession in the UK looking all but certain. With consumers expected to be penny-pinching in the coming months, it remains to be seen how coffee purchasing will be affected going into next year.

This month we will be looking at Brazil, Kenya and Papua New Guinea.

The news in Brazil is currently dominated by the return of Lula to the presidency, who will be serving his third term after being convicted and then cleared of a corruption scandal during the last election. The Brazilian Real briefly climbed following the result but has since fallen. At the time of writing, it is too early to say whether this movement is a result of Lula’s policies or the political unrest following Bolsonaro’s refusal to concede. As the world’s largest Coffee Arabica producer, higher levels of market speculation in Brazil due to the political change is likely to affect the ICE Coffee C Futures.

The yield of the current crop in Brazil is not expected to be as large as predictions, though still up on a yearly basis. This was in part due to climate change and adverse weather towards the end of the harvest. Since then, the weather has been generally favourable, with better-than-expected rainfall in most coffee-growing regions leading to predictions of a good 23/24 crop. This has been suggested as one of the contributing factors for the recent drop in the market, which you can read about here.

Like the UK and Brazil, Kenya also has a recent change in leadership. The new President, William Ruto, has promised to tackle inflation and ballooning national debt. There is optimism from the general public, but the market remains sceptical as the Kenya Shilling has slid by 10% against the dollar compared to last year.

Steady crop volumes are expected for the rest of the year from the western coffee-growing regions, after which central Kenya will begin their harvest. The rains in the eastern and central coffee growing regions have been very much delayed this year, with intermittent rain in the Rift Valley and west. It’s still too early to gauge next year’s crop yield, but with the current draught, estimates are for a 10% reduction.

Auction prices are at their lowest since 2020 as demand decreases. A few larger multinationals are stocking up as a result, but most exporters have not adopted this position. The falling market has also driven down prices, but the farmers have been cushioned slightly by the weak Shilling (although they receive less USD for their crop, the USD is worth more KES).

The prime minister of Papua New Guinea, James Marape, announced his new cabinet in August of this year. One of the highlights of this announcement was the inception of a brand-new ministerial position: ‘Minister for Coffee’. PNG are believed to be the first country in the world to appoint a minister specific to coffee, highlighting their commitment to expanding key agricultural industries across the country. MP Joe Kuli, from the central highlands region, has taken on this position.

The main harvest season is ending, with crop estimates for the year sitting at the typical level of around 800,000 bags. The last of the fly crop will be harvested until the end of November when more exact figures will be available. Weather conditions remain stable as we look towards to the 2023 crop.

The new coffee grading system announced in 2020 is slowly coming into effect. The changes create a more precise and streamlined system with a focus on quality and screen sizing. This will bring the categorisations more in line with global standards. Export groups are hopeful that this transition will be complete and commonplace by 2024. The below graph explores these changes in more detail. 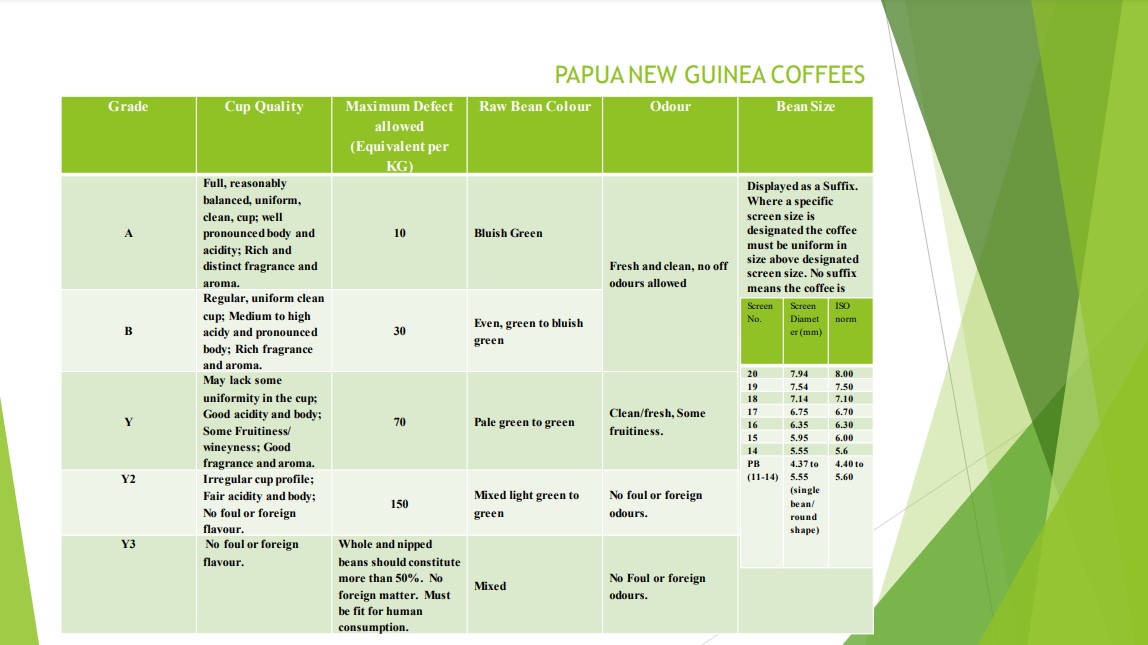