Of course the big news of the month was the easing of lockdown restrictions in the UK, and combined with the sunniest April on record, it brought some semblance of summer. Pub gardens, shops, gyms and hairdressers all reopened allowing people to quench their thirst for a pint of draught or get back on that fitness hype. All being well, the next shift back to an open country will be in May. The news of the passing of Prince Philip was heavily featured. He managed to reach the age of 99.

Violence in Northern Ireland continued from March as Loyalist Groups oppose the new rules regarding the Irish Sea Border imposed as a result of Brexit. The protocol means that Northern Ireland is still considered to be part of the EU single market to allow easier trade with Eire, but means that trade with the UK undergoes import procedures.

The announcement of a new football European Super League that would have included the UK big 6 as well as the top teams from Italy and Spain was revealed. However, it was quickly retracted after it received fierce criticism from fans, managers, players and almost everyone who wasn’t a club owner.

April saw the NYC climb from below 120 c/Ib to over 144 c/Ib by the end of the month. No significant developments occurred in regard to the strength of the Pound.

This month we gain further insight into Papua New Guinea, Peru and Hawaii.

Even though part of the British commonwealth, to many of us PNG remains a very mysterious and un-explored island in south east Asia with its own tribes and rituals. Premium coffee sourcing is much influenced by bigger multinational players selling short and driving up prices locally when in need of coverage, less caring about quality. Being their most valuable agricultural product, another challenge our producers are facing is theft of coffee.

Unlike its neighbouring Indonesian islands, flavours from PNG are usually less spicey and earthy, especially the estate grown lots. Well processed coffees can show good chocolate notes and fruitiness. We are lucky to be able to source from trusted and faithful growers with relations going back to the start of DRWakefield in the seventies.

In November 2020, the government gave PGK10 million around (£2 million at time of writing) in price support to the coffee industry. This resulted in an increase in coffee volume and quality. Also the Coffee Industry Cooperation (CIC) made some changes to Papua New Guinea’s green bean grading and classification system. It is now turning into much more cup-based evaluation, rather than the traditional solely defect-based assessment.

Weather was favourable at the end of 2020 which is why we expect a good crop this year. However, as we are now in the early part of the coffee harvest season, heavy rains and landslides in many parts of the highlands are affecting coffee flows to the factories and the shipping port in Lae. We are expecting the situation to improve and the wet season (October-April) to come to an end. We will see increasing volumes of coffees coming in. Production expectations for this crop are up to 1 million bags.

Peruvian coffee lands consist of 425,000 hectares cultivated by 220,000 (mostly small) producers involving around 2 million people. 10 years ago it used to export 5 million bags, but unfortunately first the Roya (leaf rust) hit and now the pandemic has slashed that. The 2020 crop amounted to 3,544,833 bags. Things are on the up though and 2021 is projected to see an increase of about 18% on average. The bulk of this increase is expected to come from the lower growing areas. (In Peru generally the northern areas have the highest altitudes and the further south you go the less mountainous it gets). The increase we owe to ongoing rains at the start of the season, that encouraged good equal flowering.

This season some plagues occurred like the ‘ojo de pollo’ (chicken eye in Spanish, don’t ask me why it’s called that) and the more famous ‘broca’ (coffee borer). However, it’s estimated that just 5% of production is affected and overall we see quality and volumes pick up. We now need the May rains to become less intense to be able to dry all that coffee parchment.

You would think that with such a positive outlook, bargains are around the corner. However, the contrary is the case, and when it comes to actual available offers at reasonable pricing, that’s another story. Prices for local raw coffee ‘pergamino’ has run up to 500 Sol qq (quintal). This is mostly driven by local demand and not so much to do with the New York Coffee Exchange. Connection with international fresh demand from overseas was therefore lost for a while. 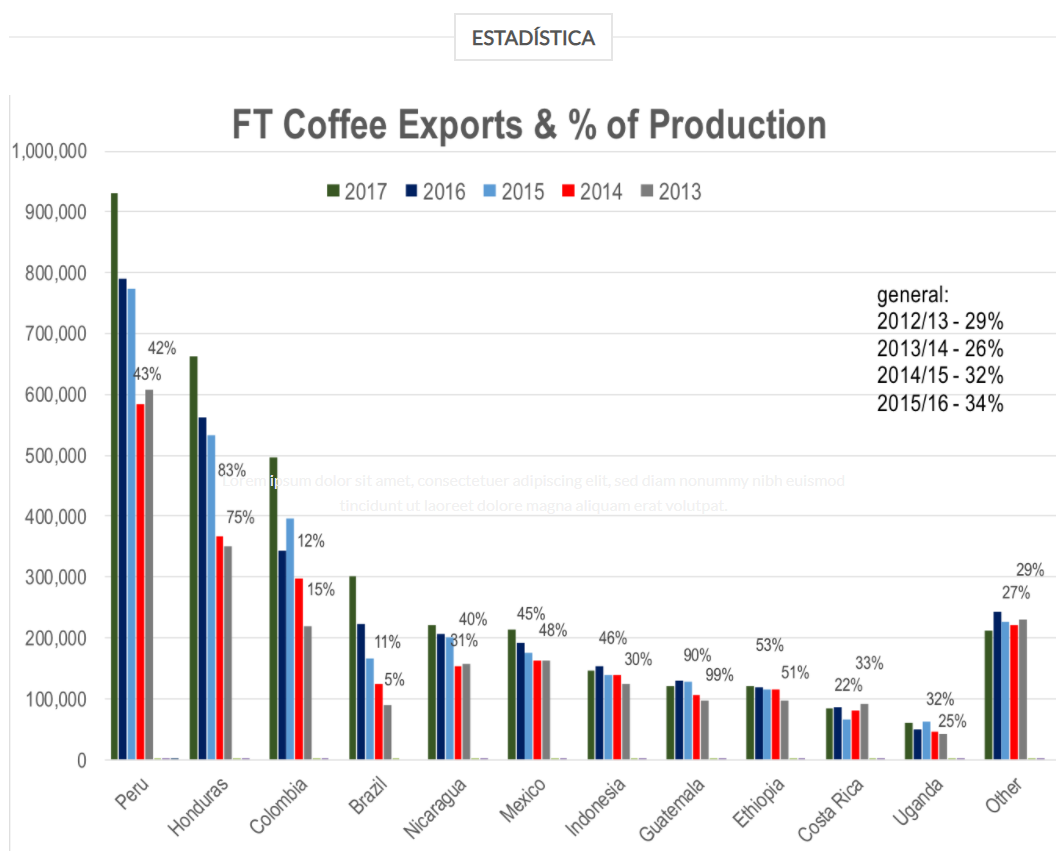 Luckily, buyers from US and Europe are now slowly realising and appreciating the increasing quality and farm certifications, such as Rainforest, Fair Trade, Organic and UTZ. These developments come at a high cost and especially with average productivity still stuck at a mere 14 qq/ha, infrastructure in bad shape and available workers migrating to the cities – breaking even can be challenging. As you can see from above graph, Peru’s contribution to Fair-Trade coffee (often combined with being organic) has been significant.

Nowadays the 10 principle exporters are responsible for 53% of export sales and have increased the competitive environment in the local market. Transnationals are buying up a lot of coffee. With still delayed contracts from 2020 in their books they are known to be very short. Their goal is to have the warehouses full in August/September so to be able to live up to shipment commitments for the end of 2021. This explains the still firm differentials being offered for new crop.

Foreign investments in Peru (and hence demand for its currency) paralyzed during the pandemic and very few exports occurred. This made the Sol weaker and the US dollar’s value increase.

We can see in below graph that in March-21 the Peruvian Sol strengthened due to a better outlook and a regained interest in its minerals and agro-commodities. In April it again weakened which is correlated to some uncertainty in outcome of the presidential election going on at the moment. In May the final elections will be held and the two remaining candidates both have announced they would give inputs and investment to local rural agriculture. Lets hope they stick to their words!

Hawaii is not an origin often featured in our monthly reports. It is the only area of the USA that commercially produces coffee and in the 20/21 harvest it produced only 2,322 MT, meaning it certainly sits alongside the smaller of the world’s coffee origins. Kona coffee is oft one of those names that conjures up images of exotic volcanoes, premium products and high prices. Currently US law states that a blend only has to contain 10% Kona coffee to include the Kona on the packaging. Despite this, it is not surprising that some companies have tried to ride off the back of this name and fraudulently sell less expensive coffees at a high margin. Hawaiian farmers fought a court case in early 2021 to sue large corporations such as Costco and Walmart for claiming to be selling Kona coffee for a fraction of the it’s normal price. The farmers hope that this will go some way to protecting the Kona brand. They are also looking to get new laws passed to increase the minimum percentage of Kona to 51%.

A lower yielding harvest is predicted for the upcoming crop. Currently they are in the midst of hurricane season which will continue until November. The last two years have been exceedingly wet and the traditional ‘dry season’ had many storms and flash floods impacting the development of the cherries and therefore reducing yields.

Like almost all coffee producing regions, Hawaii suffers from the common diseases and pests that plague farms such as Coffee Berry Borer and Coffee Leaf Rust. Rust was only first detected on Hawaii Island and Maui in October 2020. Since then a quarantine procedure has been set in place to try and limit the spread, although incidents have been reported on a further two islands as recently as January 2021. However, being  part of the United States does have its advantages and unlike many producing countries around the world growers can access a number of state benefits to aid their farms. The Hawaii Department of Agriculture offers a pesticide subsidy program to help farmers tackle Coffee Berry Borer up to a cost of $600 per acre.

Demand for Kona coffee remains very high and due to the expected lower yield this year, supply is unlikely  to be able to meet this, allowing those historically high prices to remain.

Our thanks to Jerry Kapka of Kongo coffee LTD, Luzmilla Loayza of Cooperativa Agragria Frontera San Ignacio, Victor Rojas of Proassa, and Karen Fazio for their input this month.