Good day. Welcome to the fortnightly DR Wakefield Market Report for the period covering 22nd of March to the 2nd of April. 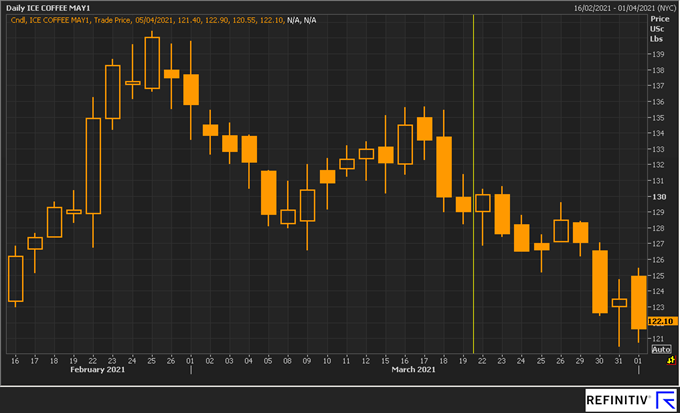 There has been much talk of a commodity super cycle but the latest Bloomberg Commodity Outlook stated ‘Enduring trends support the bearish scenario’. Another interesting piece from the report was the mention of Bitcoin and its move towards being a credible asset: ‘Bitcoin is well on its way to becoming a global digital reserve asset…’. Time to take digital gold seriously?

The Commitment of Traders (COT) Report with the cut-off Tuesday 23rd March 2021 continued the trend of the previous two reporting periods and the non-commercials once again shaved their net long position from 28,224 lots long to 21,587 lots long.

The next COT report we got from the Commodity Futures Trading Commission (CFTC) with the cut-off Tuesday 30th March again showed the funds trimming their position by a further 9,351 lots to reach a net long position of 12,236 lots. The non-commercials are still long across the majority of commodities, but the trimming of their long position observed in coffee last week could also be observed across most other commodities. How bearish are the funds? It will be interesting to see if this 4-week trend continues. Perhaps we’re not long away from a net short position?

Certified Arabica stocks continued to build, and Brazil remains the largest origin at the board with Honduras placed 2nd and Peru placed 3rd. 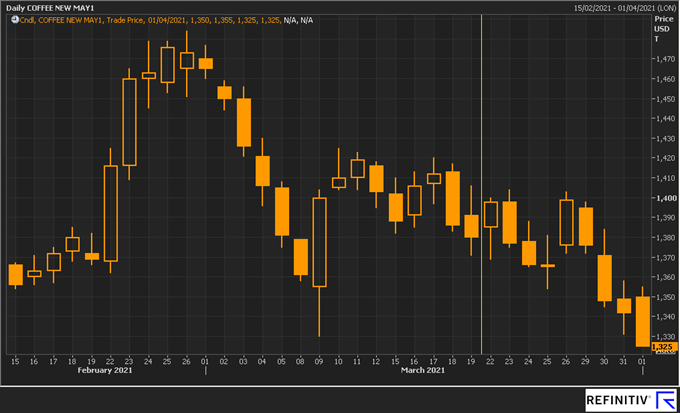 The Robusta market opened Monday 22nd March at 1,385 $/mt. The following day, like it was for Arabica, was the highest the market would go over the 2 weeks that followed, surpassing 1,400 $/mt. It lost value over the ensuing days and after a brief pullback on the 26th, slid to a close of 1,325 $/mt on Thursday 1st April.

How could we write a report and not feature the Ever Given ship? Its beaching on the Suez Canal and the inability to move it caused a logjam that effected supply chains all around the world. Around 12% of global trade passes though the Egyptian canal and the effects were strongly felt, especially in ‘just-in-time’ supply chains. On Monday 29th March the ship was finally freed and it was estimated that it would take 10 days to clear the backlog of ships. The work is still underway.

Brazil continues to struggle with Coronavirus and on Thursday 25th of March it recorded a record of almost 100,000 confirmed cases in 24 hours. There is some good news though, the Butantan Institute (a Brazilian research centre) announced it is developing the first 100% Brazilian-made vaccine against Covid-19 called Butanvac. The institute has requested authorization to start clinical trials of this single dose vaccine in April.

Peruvian pricing remains firm with some commercial grade 1s still being sold domestically at a price higher than the FT minimum export price. There are a number of factors at play here but one of the biggest drivers is the fact that many of the large exporters remain short and are paying a premium to secure the physical for their export contracts. Less and less single cert coffee is available with Utz in particular hard to secure. 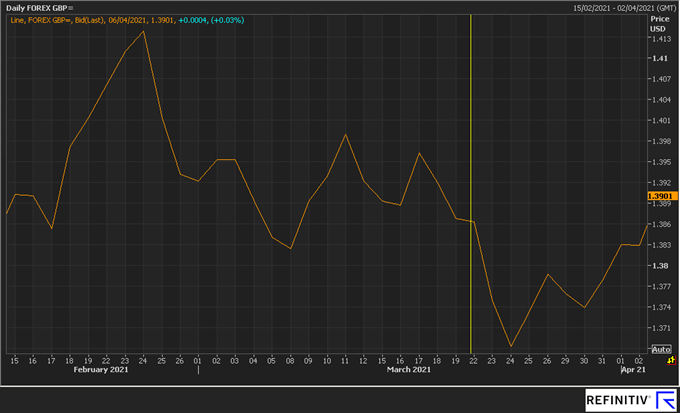 1 Pound bought you 1.386 USD on Monday 22nd of April. As trading started the Pound depreciated against the Dollar to a 6-week low of 1.368 on April 24th. Concerns over vaccine disagreements with the EU Commission saw the Pound come under pressure. However, vaccine exports to the UK were not blocked in the end and it regained some value against the Greenback and hit 1.378 on the 26th, only to fall once more to 1.373 on the 30th. It did not say there for long however. It tracked upwards to 1.383 on the 1st and closed Friday 2nd at 1.382. 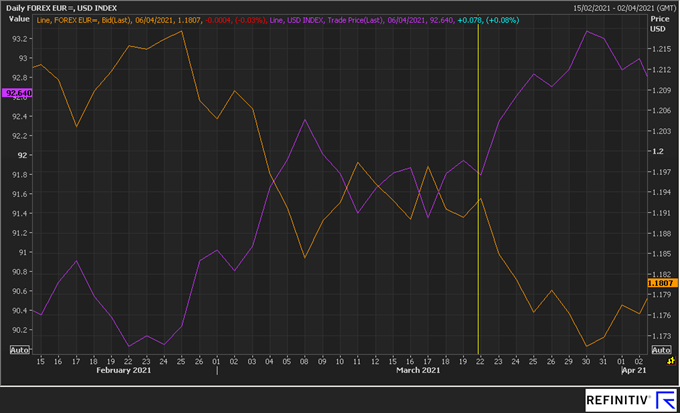 This month we also have the US Dollar Index on the graph. Why? It also hit a high we have not seen since last November: on the 29th of March it surpassed 93.  Why is this significant? In the past there has been a strong inverse relationship between the US Dollar and commodity pricing so as the Dollar continues to strengthen, this could be a strong bearish factor to consider for coffee over the medium term.

We hope you have a good rest of the week and see you on for the next fortnightly report on the 20th!