Good day. Welcome to the fortnightly DR Wakefield Market Report for the period covering Monday 14th of June to Friday 25th of June. 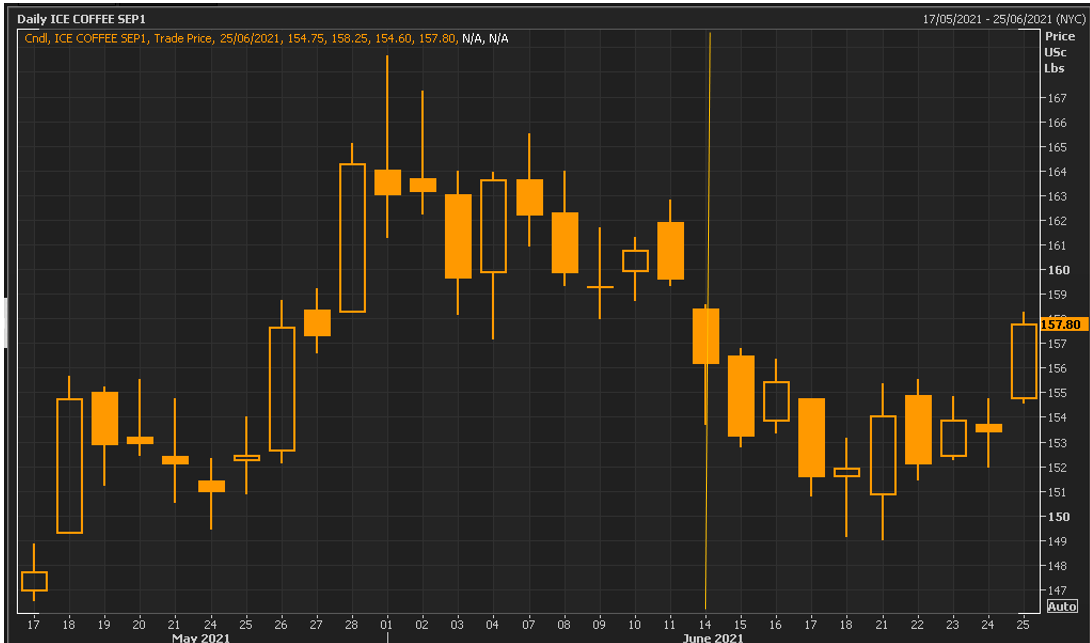 In this report we will be moving our analysis away from the July 21 terminal month to focus on September 21. The New York opened the period at 158.40 c/Ib and spent the next week falling to reach a low of 149.05 c/Ib by the 21st. Although, the same day also saw the market tick upwards and close over two cents higher than the previous at 154.05 c/Ib. This was due to it being the day preceding the First Notice Day and players looked to close out their July positions and open September allowing the bids to gain some traction. The largest intraday movement also came on the 21st with a total movement of 6.05 c/Ib.  After the initial drop the market continued to readjust itself and the second week reversed this trend, and the NYC made its way back to climb up to close at 157.80 c/Ib by the 25th. Will we see it peak over 160 c/Ib anytime soon again?

The CFTC’s COT report with the cut-off Tuesday 15th of June showed the specs taking their first large step in almost two months towards reducing their net long and brought it down nearly 6000 lots to 34,703. The commercials converged slightly with their opposites and brought down their net short by nearly 7000 lots to 114,772.

The CFTC’s COT report with the cut-off Tuesday 22nd of June saw the specs make another move towards flat and reduce their net long position further to 26,461. The commercials reduced their OI in both the long and short positions and reduced their overall net short to 104,565 lots.

The same story of growth transpired for certified coffee stocks reaching up to 2.18 million bags. These large volumes in Europe and the US may prove to be invaluable if these shipping container problems persist or get worse, restricting the volume that can be imported. Robusta volumes actually dropped off slightly to a new value of 2.52 million bags. 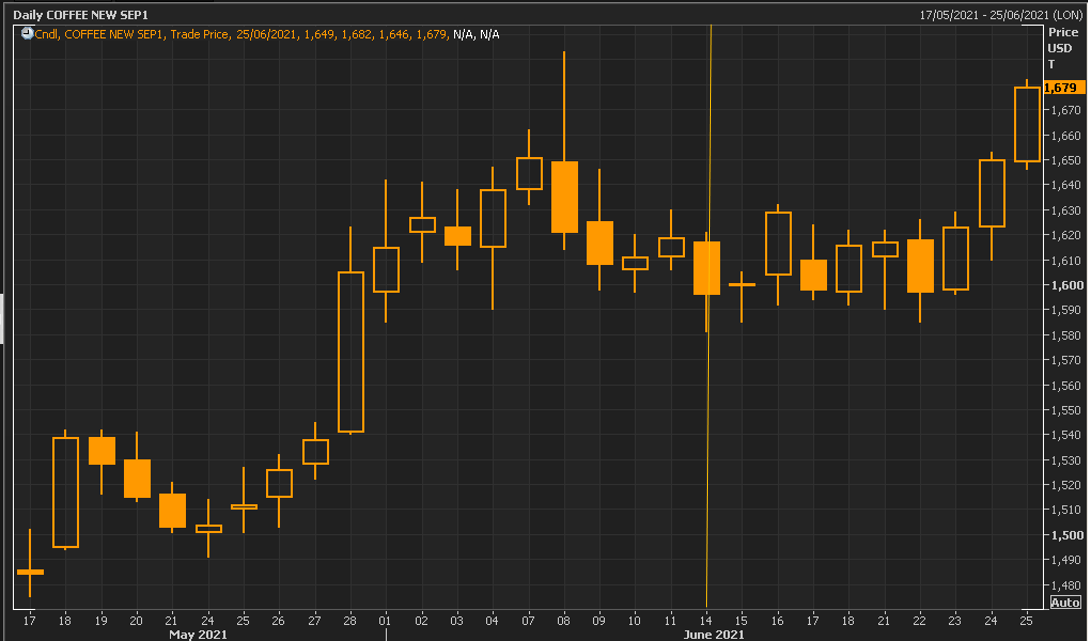 Having rallied over 1600 $/MT in the previous month, Robusta opened at 1617 $/MT and traded sideways for the first 9 days making no significant gains or losses. The 24th saw upward movement on price as the FND approached and those who still had them, looked to close their July contracts. The 25th saw another push to the sky, and it closed this period at 1670 $/MT.

The USDA released a report for 21/22 predicting a drop in global production down to 164.8 million bags. This is largely due to the impact of Brazil and highlights the significance of droughts in the main coffee-producing regions. Bag numbers could decline to equal 15/16 year totals, the last time production in Brazil was heavily impacted by drought. If these estimates come true, it could be the first time since 2017 that demand outstrips supply, even if only by around 1%.

Weather will always be a farmers’ greatest adversary and late June has also seen a cold front in Minas Gerais, Sao Paulo and Parana. Lows of 10ºC have been felt and there is an apparent risk of frost in the coming week. Logistical problems are still persisting as there is a great demand for food-grade containers, largely to China. The ongoing impacts are further delays and losses, as well as increasing freight rates.

The Brazilian Real hit a 1 year high of 4.970 off the back of the Central Bank’s meeting minutes suggesting they are going to take a more hawkish stance to keep inflation in check.

Nicaragua is currently running exports of around 260,000 bags less than the 19/20 crop.  This could be an indication that the overall cop is going to be smaller than even the readjusted figures. At this rate, 19% down from the 19/20 crop seems to be a reasonable prediction, a total of 2.1 million bags. This, and worldwide shipping container issues, are helping to keep internal differentials high despite the recent NYC market surges. Nicaragua also produces a small crop of Robusta every year. It is not commonly used in the UK and makes up nearly 4% of their total exports.

Arabica production in Thailand is a growing industry largely due to increasing in-country consumption. Forecasts for the upcoming year hint at 12,000 MT which would represent a 7% increase from the previous year. Larger production numbers are mostly coming from developments of new coffee farmlands rather than increases in yield from already established areas. In a juxtaposition, exports from Thailand are on the decline as demand already massively outstrips supply resulting in the import of over 60,000 MT per annum. Less than 300 MT of green beans were sent abroad in 2020. 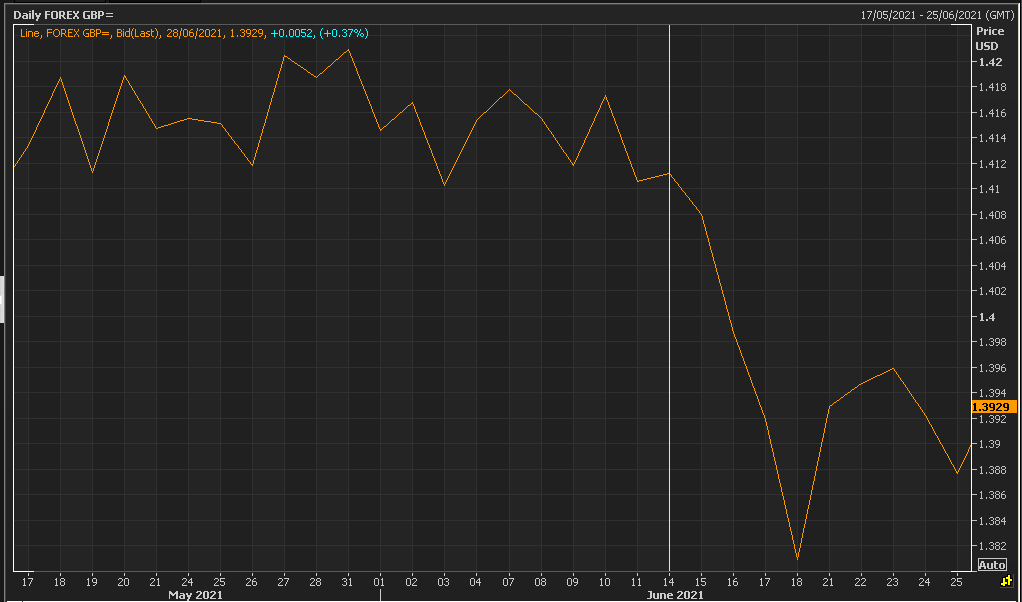 Positive economic news coming out of the US helped strengthen the dollar and cause a significant slip in the value of the pound. Having stood firm over 1.40 since early May, the Pound hit a low of 1.381 on Friday 18th June. Over the weekend some territory was regained, but it didn’t take too long for it to be lost again as data showed that UK consumers are being more conservative with their saved up pandemic pots than estimated. The results of this could mean a slower rate of growth for the UK economy than one would hope for. The 25th end with a value of 1.392. 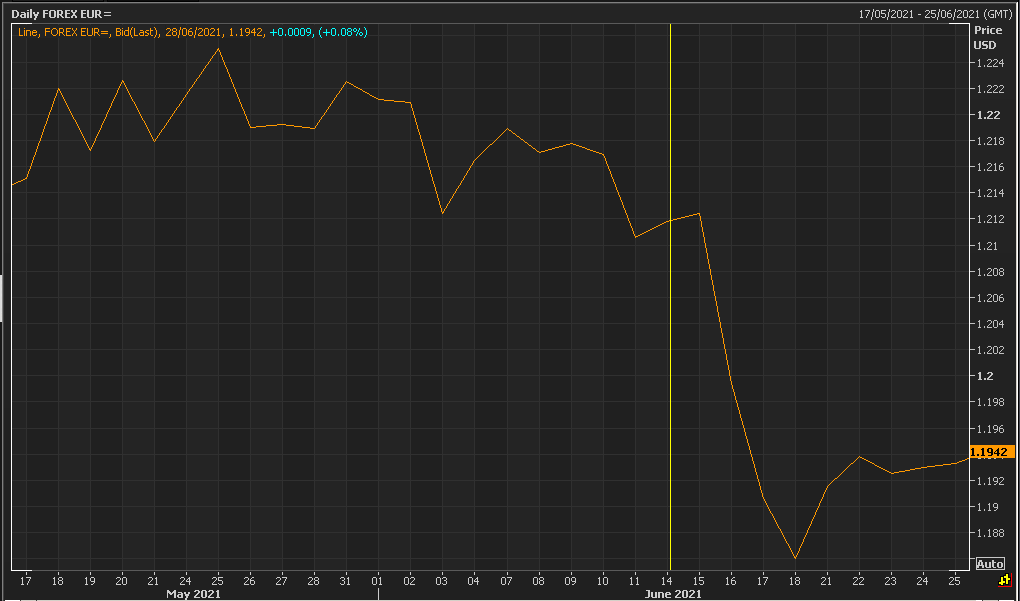 Much like Sterling, the Euro wasn’t able to fight against the strengthening greenback and it lost value to drop from 1.212 to 1.186 over a three day period. Reports detailing financial data allowed some clawing back of marginal gains against the big green machine, but the Euro settled at a modest 1.194 on the 25th June.

We hope this report was useful and we’ll be back in a couple of weeks.