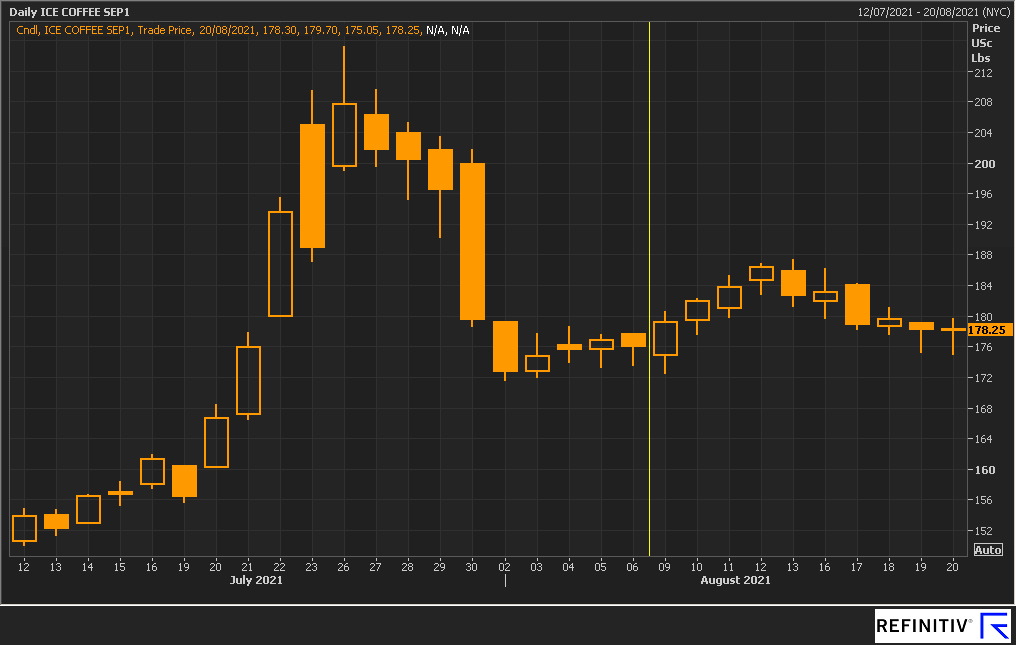 New York opened Monday 9th August at 174.80 c/lb and hit a low of 172.45 c/lb before closing at 179.35 c/lb. The low of 172.45 c/lb would represent the lowest point of the fortnight, and although a cursory look at the graph would suggest that not much happened in the coffee market, looks can be deceiving. The high daily ranges of the frost bull run and the collapse after the last cold front skew the numbers and make last fortnight’s activity look quieter than what happened in reality. After it hit the fortnight’s low, New York tracked upwards, and on Thursday 12th of August hit a high of 187.35 c/lb, representing a 14.9 c/lb trading range for the fortnight.  Monday 16th August opened at 181.95 c/lb, and the industry was busy preparing for First Notice Day on Friday 20th. 180 c/lb was a common GTC from origin on Thursday and Friday, but 179.70 c/lb was the closest we came to that number on Friday before closing out the week at 178.25 c/lb. We move from the September to the December terminal and gain a few cents in the process.

In the CFCT’s COT report with the cut-off Tuesday 10th August the Non Commercials reduced their Net Long Position by 4,862 lots to 28,952 lots long.

In the CFCT’s COT report with the cut-off Tuesday 17th August the Non Commercial Net Long increased by 1,563 lots to 30,495 lots. Commercial Shorts and Commercial Longs saw their positions greatly reduced as the September option expiry was 18th August.

Cocoa was the last soft commodity standing on the Non Commercial Net Short position front due to excess supply. However, this week it joined the rest of the club, and now the speculators are long across all softs.

Certified Arabica stocks went from 1.62 million bags in January to surpass 2 million bags during April. Since then, we have not seen too much movement, with August figures now at 2.15 million bags. Honduras and Brazil continue to make up the majority of coffee in exchange certified warehouses. 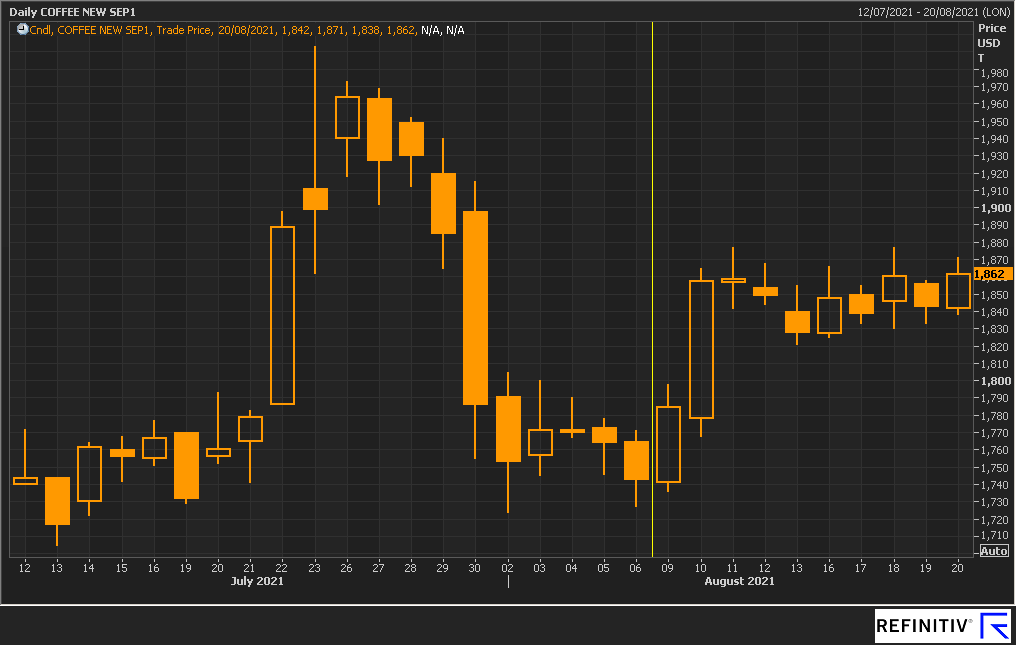 Robusta opened the fortnight 1,741 $/mt and opened strongly, closing the Tuesday at 1,858 $/mt, 117 $/mt up on Monday morning. Concerns over supply drove the increase, as less Brazilian Conilon was made available for the international market due to strong domestic demand. After that, however, it calmed down and broadly traded in a 50 $/mt range, closing the week out at 1,862 $/mt.

Sellers are increasingly hard to find in Brazil. With high internal pricing and still much uncertainty surrounding the extent of the frost damage. A few exporters have told us that they would rather not sell for a few weeks untill the flowering starts, and they can cover their shorts (if they have any). The harvest is nearing its end, and we now move from frost scares to concerns over lack of rainfall. If farmers do not receive enough rainfall, this could put even more pressure on the size of the next crop.  The Brazilian Real devalued against the US Dollar and now sits around 5.4. We are seeing delays to shipments that we are more accustomed to seeing coming from other origins. Lack of food-grade containers is pushing back shipments by as much as 7 weeks, and rolled bookings are becoming increasingly common. On August 17th, Brazil’s National Monetary Council approved 1.3 billion Reais ($240.7 million) in funds to support coffee growers hit by severe frosts.

We are nearing the end of the shipping season for coffee from Myanmar, and this harvest has been one of the trickiest to navigate so far. Myanmar suffered a coup in February, affecting coffee harvesting and processing across all producing regions. As a result, many mills had to pause the production line, given that some producers could not travel to deliver their coffee. This year there is also less natural and honey processed coffee available as it was considered too risky due to the extended drying time on exposed beds. However, the partners that we work with are well and still in business. We look forward to receiving a container from them in October.

We don’t usually feature import countries, but given the importance of the USA in the coffee world, we’re going to head there this report. Due to extreme congestion in the world’s largest container ports, 409 container ships carrying 2.73 million twenty-foot equivalent units (TEUs) are currently anchored off ports worldwide, waiting to be berthed and unloaded. As you can imagine, key US ports are suffering large backlogs. For example, the port of Los Angeles said year-to-date container volumes were up last month to a total of 6,318,675 twenty-foot equivalent units (TEUs), a 36.8 per cent increase compared to 2020 levels.

The Marine Exchange of Southern California reported that a new record was set on 13 August, when a total of 125 vessels (of all types, including tankers and cruise ships) were either at berth or anchor at the San Pedro Bay port complex. Another new record was set on 14 August with 68 ships (of all types) at anchor, including the use of four drift areas. These delays are impacting all import goods, and coffee is no exception. This could be a bullish factor if supply is affected in the medium term. 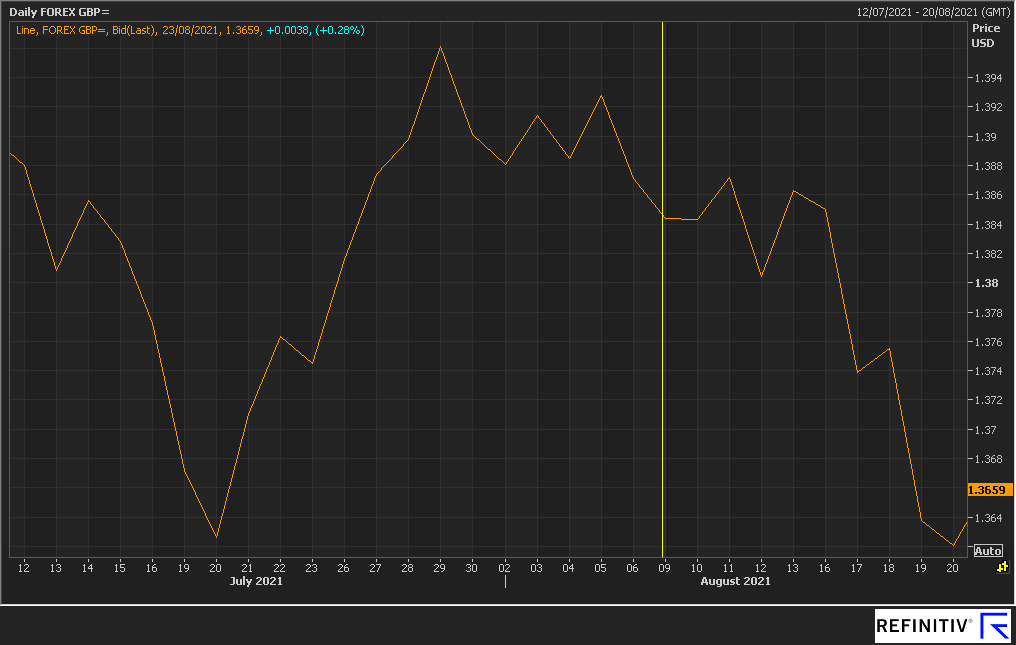 The USD has continued to strengthen across its key currency pairs, and Pound Sterling is no exception. GBP/USD was at 1.384 on Monday August 9th and, bar a few small rallies, the only way was down as the pair finished the fortnight at 1.363. The July minutes of the Federal Open Market Committee (FOMC) showed that it was quite likely the FED would taper at some point in 2021. If the hawks dominate the debate and the Fed does indeed taper, the Greenback could strengthen even more, and we may see the Pound slide even further. The good news for UK roasters is that a strong Dollar is a bearish factor on coffee futures, so if the Dollar does indeed strengthen and the Pound loses value, we may also see the NYC drop a bit, which could partly compensate for the weaker Pound. We will be paying close attention to the September FOMC. 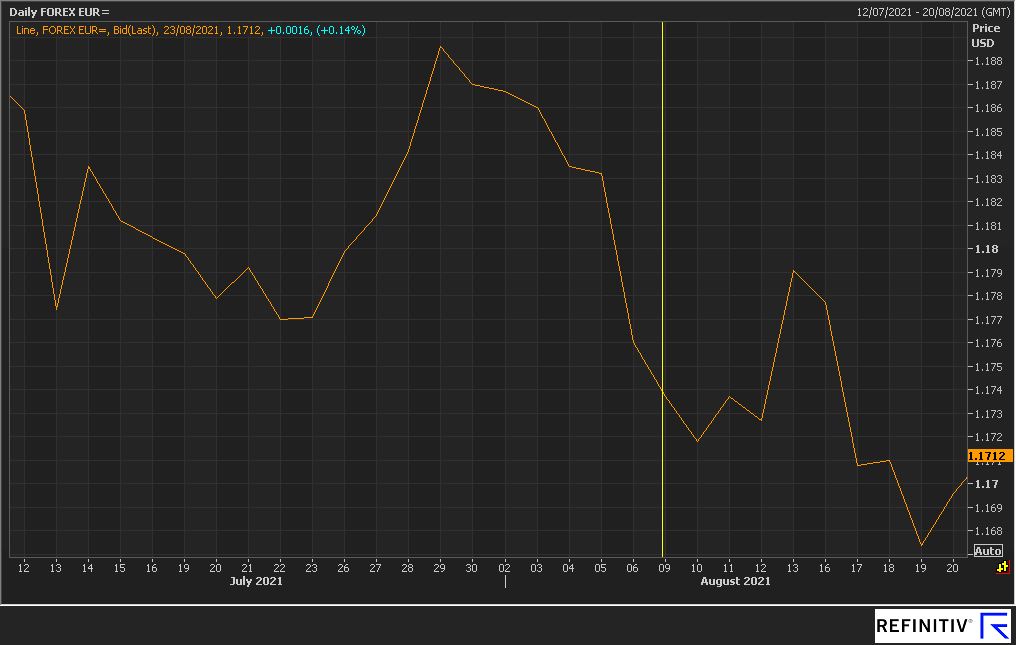 Growth in the Eurozone is coming back as lockdowns ease, but fears over the Delta variant and low underlying inflationary pressure signify that this is unlikely to see any hawkish moves at the ECB’s meeting next month that could match the Fed’s flirt with a taper. The ECB has taken a more dovish tone and this continues to put pressure on selling the Euro and encouraging the recent downtrend. EUR/USD started trading at 1.174 on Monday 9th August and strengthened to 1.179 on the 13th. However, it could not hold this level and broke through the 1.17 support level on the 18th. It finished Friday 20th just above that level, and indicators show that it’s unlikely to hold above 1.17 for very long.