Good day. Welcome to the fortnightly DR Wakefield Market Report for the period covering 8th of March to the 19th of March. 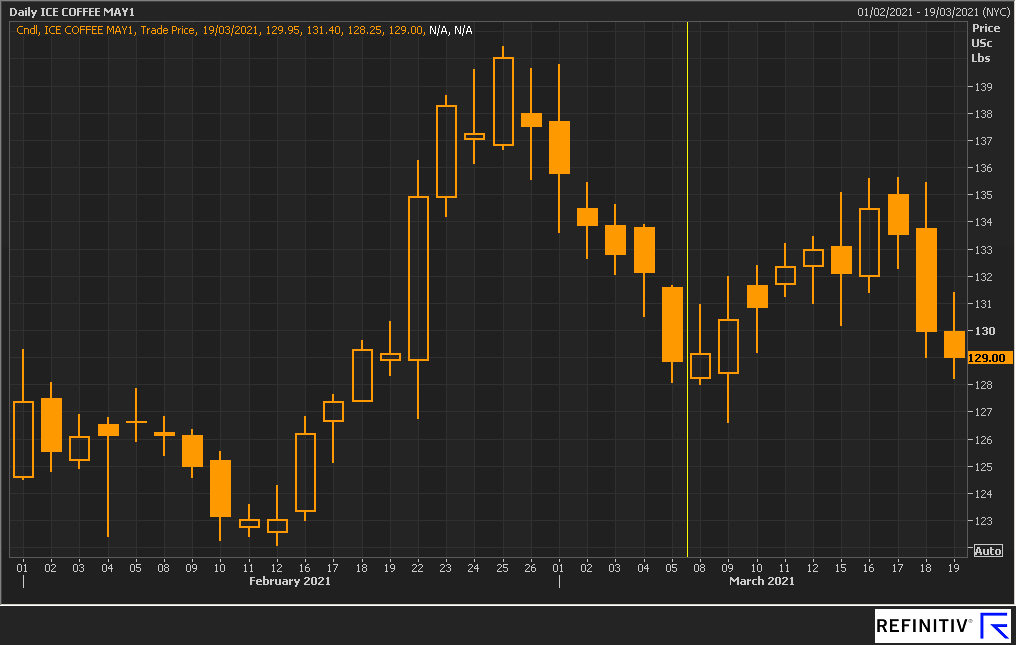 New York opened Monday 8th of March at 128.25 c/lb and the big question on people’s minds while drinking their morning coffee was ‘will the downtrend continue’? All of the previous fortnight’s gains had been wiped off the board by Friday’s close. The tide was held at bay and the market ticked up on Monday. Tuesday saw a fairly large daily range of 5.4 c/lb and it closed at 130.50 c/lb. The market continued upwards for the rest of the week and Friday’s close was just shy of 134 c/lb. Monday 16th of March was another sizeable day of 4.2 c/lb and although it did surpass 135 c/lb, it could not hold this level and finished the day at 134.50 c/lb. The following day saw the fortnightly high of 135.65 c/lb, before a plummet on the 17th where it closed at 129.95 c/lb and represented the fortnight’s largest daily range of 6.45 c/lb. Friday closed at 129 c/lb, less than a cent more than it had opened 2 weeks prior.

The Commitment of Traders (COT) Report with the cut-off Tuesday 09 March 2021 showed the funds trimming their net long position from 36,285 lots long to 29,470 lots long. Managed money remained long across all the major commodities. Commercials in coffee took the other side with the long book increasing by 6,442 lots to 81,698 as roasters took advantage of the market correction.

The COT report with the cut-off Tuesday 16th March showed that although the Open Interest increased, there was not a huge change in the overall positioning of both the funds and the physical trade.

Brazil and Honduras now represent over 85% of global certified Arabica stocks and semi-washed Brazils have now surpassed Honduras HG as the largest grade in the Arabica certified stock position. Global stocks continue to build but this is largely driven by the stock building in European warehouses. 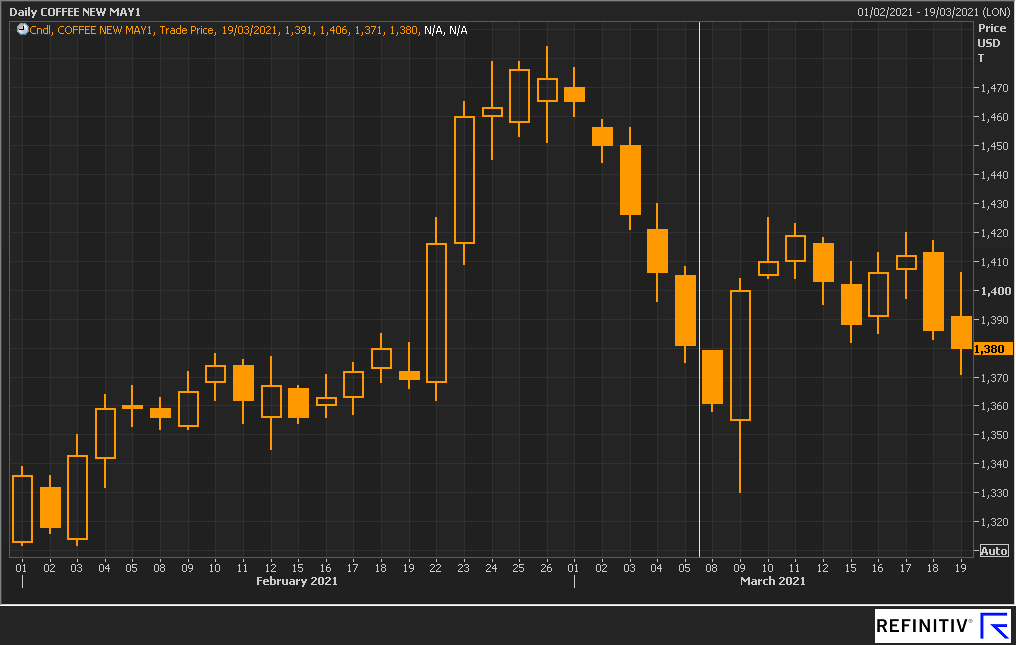 In the same vein as Arabica, the Robusta market endured a torrid week 1st to 5th of March that saw it lose all of the value it had gained the previous week. Monday 8th March opened at 1,379 $/mt and although it decreased that day, Tuesday saw it surge to over 1,400 $/mt. It mostly traded sideways for the remainder of the fortnight before closing the month at 1,380 $/mt, just 1 $/mt more than how it started.

The recent depreciation of the BRL saw a sell off of coffee in Brazil. Compared to prices in February 2019, prices in BRL terms have more than doubled. Although everybody is talking about the scarcity of the next crop, record numbers for this one continue to roll in. Cecafe amended their January export data figures higher by 245,000 bags to a January export record of 3.59 million bags. Brazil’s central bank raised interest rates for the first time in 6 years as inflation surpassed their target rate of 3.75%. They increased the rate from 2 to 2.75% and indicated another raise in May was likely.

As we have seen across many coffee origins, the traditional harvest period has been elongated with first pickings starting earlier and earlier. In Peru there are some lower altitude regions already harvesting with new crop pergamino hitting some cooperative collection centres across Cajamarca. The region has been plagued by heavy rains over the last fortnight which will bring serious drying challenges for farmers.

Stocks in Ho Chi Minh are at their highest levels since April 2017. This is not due to the size of the crop but more the lack of activity in Vietnam and the continued shortage of containers in South East Asia. In fact, some traders suggest that the crop is lower than first thought. Circa 60% of the crop is sold, which is in line with levels seen last year. 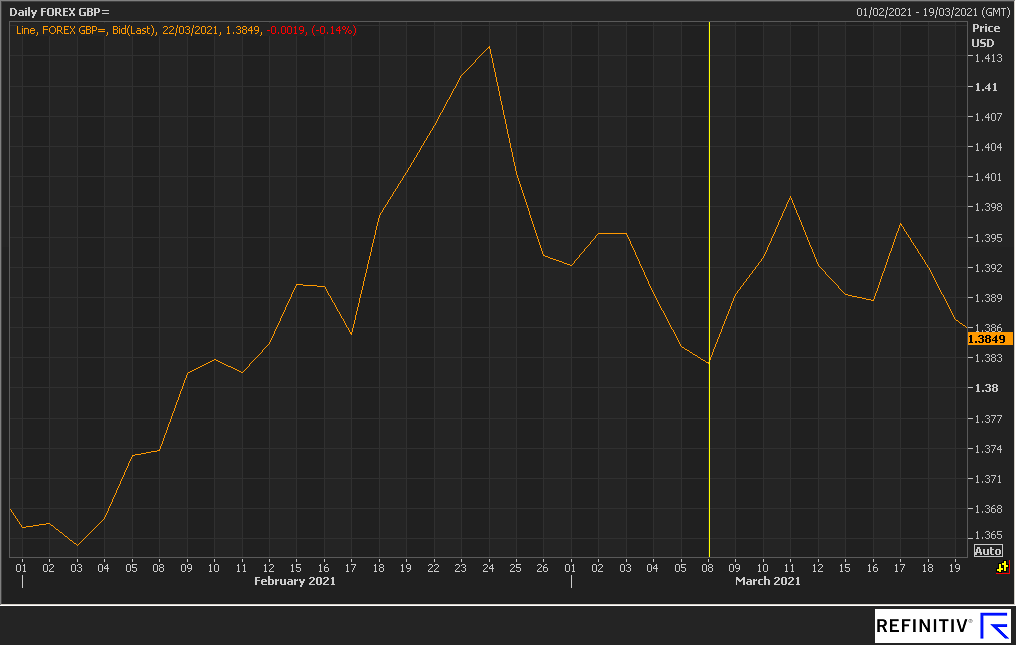 On Monday 8th of March Pound Sterling was trading at 1.383. Schools reopening reinforced expectations that the UK economic recovery was underway and going ahead. Positive comments coming from the Bank of England strengthened Sterling and the rebound in equities coupled with a positive risk appetite saw it continue to surge towards the 1.40 level. It just missed its target. On the 11th of the month US President Biden signed the $1.9tn stimulus bill into law and the Pound lost some value as a result, losing ground each subsequent day to hit a level of 1.389 on the 16th.

GBP/USD strengthened ahead of the Federal Reserve meeting on the 17th. During that meeting the Fed unanimously left its benchmark overnight interest rate in a target range of 0-0.25% and Fed Chairman Jerome Powell confirmed that the bank would keep its interest rates near zero, even as inflation is expected to surge above the Fed’s target of 2%. It also forecast the strongest economic growth for the US in nearly 40 years-a whopping 6.5% for this year! It’s rare to see those numbers alongside western economies. This positive sentiment surrounding the US economy saw it finish the month strongly at 1.384. 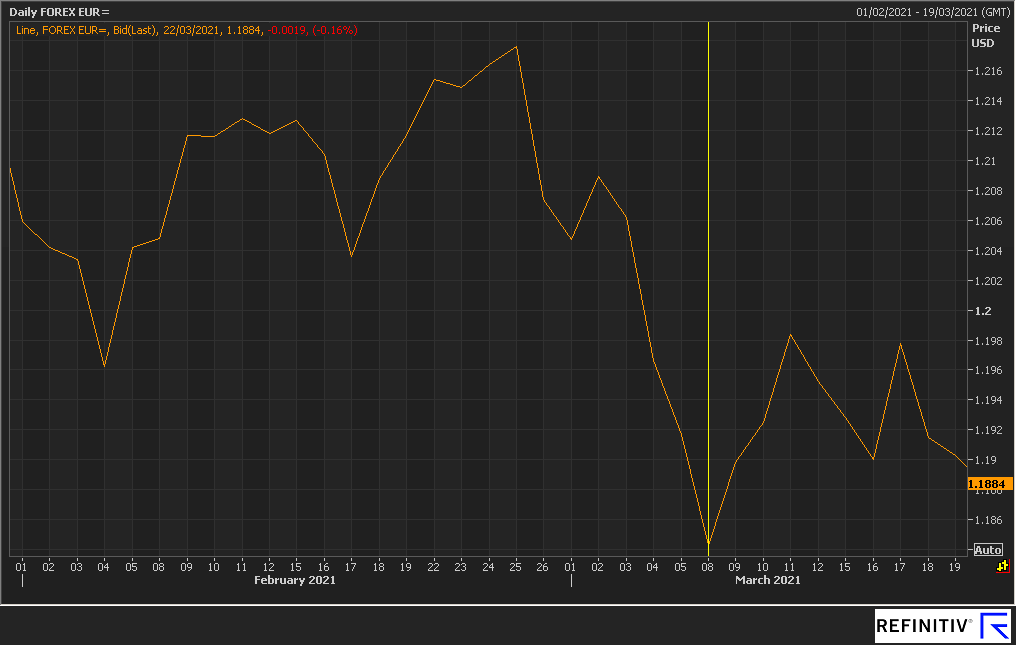 We have become quite accustomed to a range of 1.19-1.21 for 2021 but the beginning of March precipitated a fall to the year’s low of 1.184 on the 8th. It rebounded the following day and increased to 1.198 on the 11th. It could not hit the 1.20 level and dipped again to 1.19 on the 16th. It tested that support level but could not push through it and instead nudged up again to 1.198 on the 17th. After the ECB announced it would accelerate money-printing and confirmed the size of the pandemic emergency purchase program (PEPP) at €1.85 trillion, the Euro lost some of the value it had regained and this time did break through the 1.19 support level, closing Friday the 19th at 1.189.

We hope you enjoyed the report and see you in April!