Welcome to the fortnightly DR Wakefield Market Report for the period covering 8th of Feb to 19th of Feb. 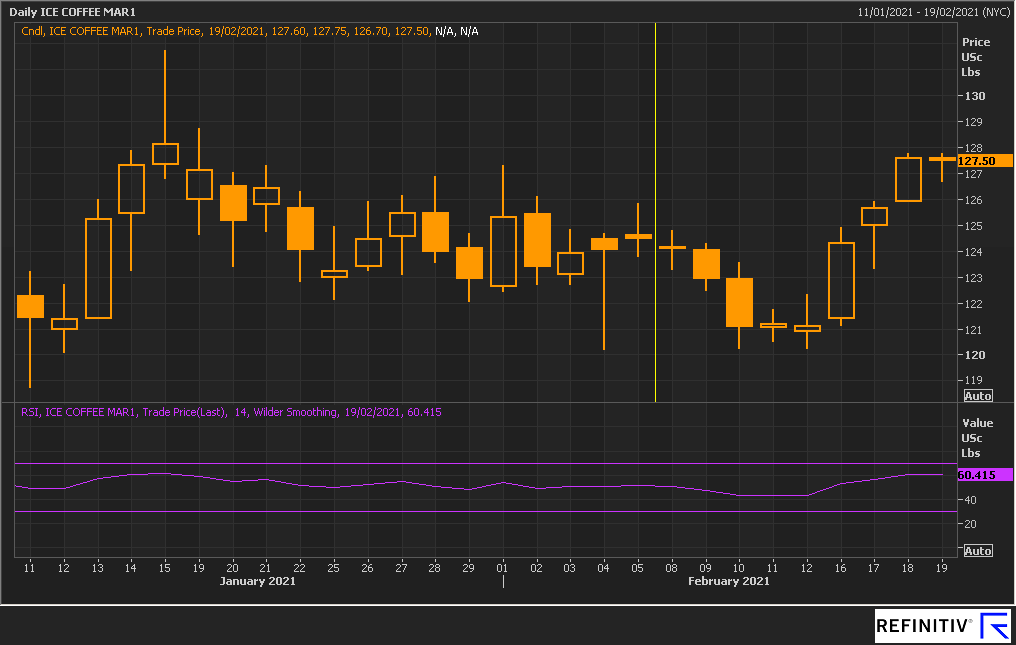 Save for a surge downwards on the 4th Feb, the market had remained range bound between 122 and 129 c/lb for the previous 2 weeks. Would we see more of the same during the next 2 weeks? Monday 8th of February opened at 124.20 c/lb and New York remained in its range till Wednesday, where it tried to test the 120 c/lb level, hovering around 120.25 c/lb, before chasing back upwards to close at 122.95 c/lb. The following day had a very narrow daily trading range and on Friday 11th the market once again tried to test the 120 level, getting to 120.25 c/lb once more. It lacked the energy to push through however, settling higher. Monday 16th was the biggest daily range of the fortnight, with the market operating in a 3.75 c/lb range. It tracked upwards for the remainder of the week and then closed the month out at 127.50 c/lb.

In the COT with the cut-off date Tuesday 9th February, the speculators trimmed their net long position, shaving off 3,075 lots, to a total of 19,752. The Open Interest (Futures and Options) however, increased, and was the highest level it has been for all of 2021, at 326,154 lots.

In the following week’s report with the cut-of date 16th February, there was not much difference to the spec’s position with a change of minus 298 lots. Open Interest (Futures and Options) decreased by 32,865 lots to 298,289 lots.

Arabica certified stocks continued to stockpile and on the 15th of February Brazil and Honduras comprised 88% of the total with quite an even split between them. As washed central differentials remain firm in the medium term, perhaps we will see Brazil grab an even bigger slice of the pie?

Colombia Excelso differentials remained firm around +50 c/lb and this level is generally accepted as the ‘new normal’.

Tet, the Vietnamese Lunar New Year, occurred on the 12th of February. This is the biggest celebration in Vietnamese culture and traditionally farmers offload a lot of coffee beforehand, so they are cash rich for the party. Over 70% of the crop had been sold before the party stated this year. High freight rates across Asia persisted.

For the last 6 months there has been much talk of container shortages and tightness of supply coming from Brazil but the shipment figures have been well above average for nearly every single month in said period. January however, saw export volumes return to long-term average levels. There was a more pronounced drop in shipments to Antwerp and Hamburg, which perhaps suggest the rush of Semi-Washed Brazils for exchange certification has abated. 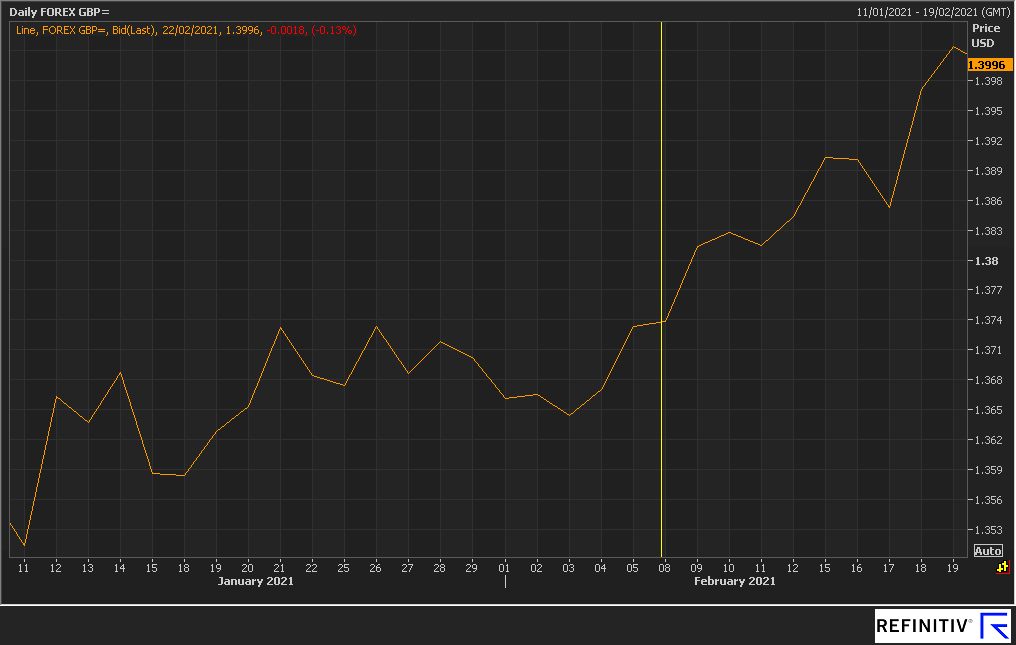 Monday the 8th of February saw 1 £ Sterling buy 1.374 USD and it immediately tracked upwards. Apart from two pullbacks on the 10th and 16th, the bullish sentiment continued to dominate and rose to meteoric levels not seen for years. You may be forgiven for thinking that the above graph is showing the value of Bitcoin over the last 6 weeks! Pound Sterling’s rise against the US Dollar continued to surge and on the 19th of February it hit a 2 and a half year high, surpassing the 1.40 level. When were we last trading around these levels? April 2018. What was behind this trend? Positive UK Covid numbers, the speed of the vaccine distribution and global risk appetite.

Strapped in for negative interest rates? No need it seems. The Bank of England’s Gertan Vlieghe, an external monetary policy committee member, stated that there would be no need for further monetary stimulus if the economy evolves as the bank predicts in their February projections. 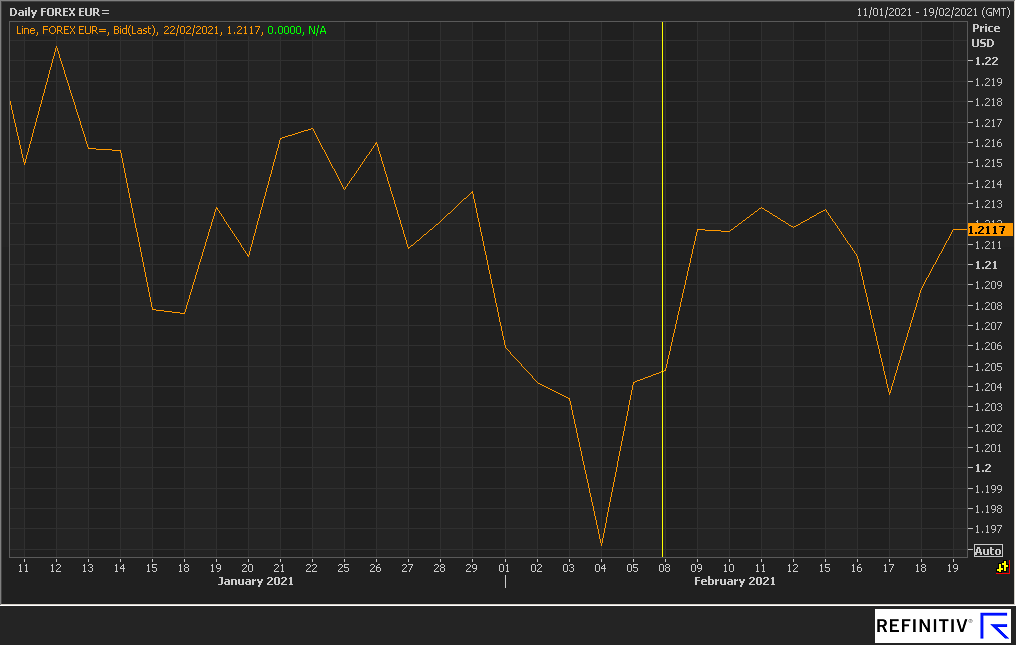 While £ Sterling has been steadily appreciating against the Greenback, the Euro’s movements have been choppier. On Monday 8th of February it looked like the Euro was on the up and the 8th was indeed a good day for the Euro, seeing it smash through the 1.21 level to 1.212. However, this uptrend was not to last and the Euro spent the remainder of the week trading sideways. In contrast to the previous Monday, the Euro plummeted on the 15th and this marked the start of a V shaped move, with the Euro finding its floor at 1.203, before rising again to 1.211. The US Dollar Index lost value over the final days of the period analysed, mirroring the depreciation of the US Dollar against both Pound Sterling and the USD.

We hope you enjoyed the report and see you again in 2 weeks! 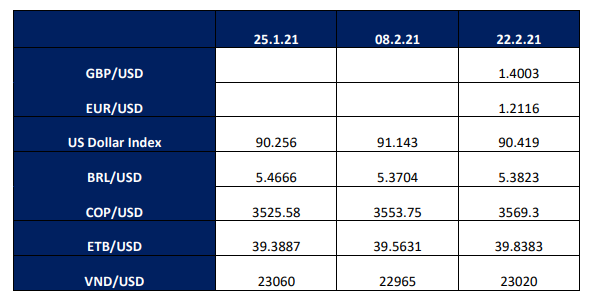