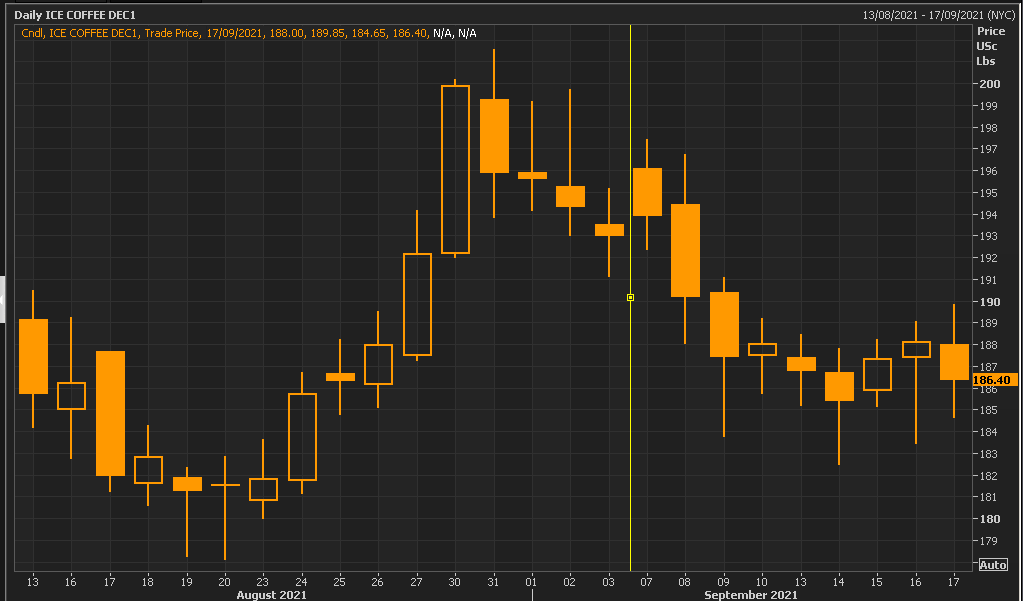 Focusing on the December 2021 terminal month, prices dropped by around 12 c/Ib over the last fortnight. Monday 6th was a Labour Day Bank holiday in the US, so market open on Tuesday 7th September saw 196.10 c/Ib. The NYC spent the next three days dropping off, in part due to the weakening of Latin American currencies which overrode the upward pressure applied by the unpromising news provided by Brazilian weather forecasts. This downward trend continued until the 14th to the fortnightly low of 182.50 c/Ib as China announced the release of state oil reserves to stabilize the domestic market, which dropped the price of commodities across the board. By the end of the week, prices managed to scrape back some ground and closed on Friday 17th September on 186.40 c/Ib. For a point of reference, Monday 20th September is the last trading day on the September terminal. On Friday 17th an Open interest of only 33 lots was recorded, compared with 137,085 lots for the December terminal.

In the CFTC’s COT report with the cut-off Tuesday 7th September saw an increase in overall OI of just over 6,000 lots to round out the week on 284,987. Part of this increase was seen by the Specs upping their longs to a net position of 36,511. The Commercials hung tight on 100,000 short.

In the CFTC’s COT report with the cut-off Tuesday 14th September, OI increased once again, but this time by almost 4,000 lots to 288,943. This time around, the Specs took a step closer to flat and reduced down to 34,031, and in customary fashion, the Commercials moved in the opposite direction and went long to settle on -96,754.

Certified Arabica stocks continue to stay stable, only declining to 2.16 million bags from 2.17 in the previous month, still higher than the 2, 5 and 10-year averages. There is a different story for Robusta certified stocks, which have fallen due to draw-offs for the fourth month running. 2.19 million bags is inline with the 5-year average for this time of year, but below the 10-year average. Brazil still dominates the scorecard with 1.15 million bags, whilst Honduras takes second place with 846,000 bags. 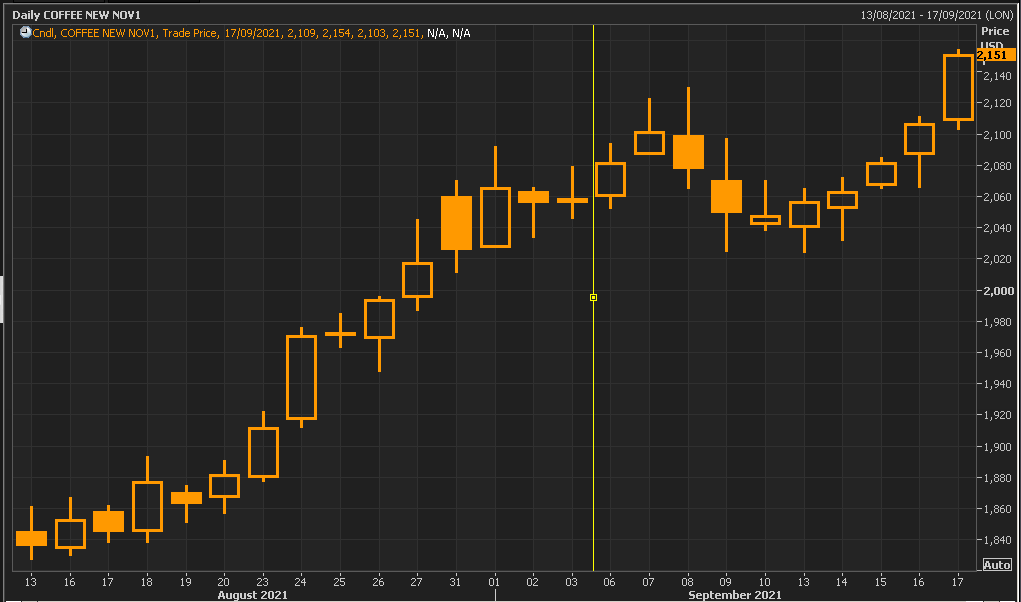 Robusta opened this period at 2060 $/MT and continued its trajectory of the previous two weeks. A temporary drop brought prices back down to the end of August levels of 2025 $/MT, but prices quickly reverted and marched further up to the heights of 2154 $/MT, closing out on the 17th at 2151 $/MT.  Part of this drive is due to the sentiment that Robusta’s value is low compared with the high Arabica market. Worsening shipping conditions and rising freight rates also apply pressure to buyers, so savings, where savings can be made, look appealing. This is part of the reason for the large drawdown of Certified Robusta socks.

In Minas Gerais Brazil, the harvest is coming to an end. A good indicator for other areas of Brazil, this crop is over 30% down when compared to the previous year. As well as the biennial low year, a lack of rain during the flowering and filling period resulted in aborted buds and lighter beans.

Recent forecasts for La Niña have been revised to a 70-80% chance. La Niña causes drier weather in South America as a result of a drop in temperature. As a result, the largest Arabica supplier dropped its market share in July by 8%, to the benefit of Colombia and Centrals & Mexico. The same might occur in August, as Brazilian exports fell to 2.67M bags, and exports are expected to be lower in 21/22. As the shipping nightmare worsens, some exporters are choosing to temporarily cease operations to manage their cash flow.

Nicaragua is witnessing reliable and consistent bean development with low levels of coffee borer beetle and other pests and diseases. An increase of 5% from the 20/21 crop is predicted this year at a total of 2.24 million bags. Demand for the upcoming crop has been significant over September despite the diffs remaining firm. The greatest challenge facing the country currently is the lack of shipping container space and the rolling of contracts. Although labour looks plentiful for the upcoming harvest, producers are concerned about the migration to the US if the covid situation improves and travel is more freely available. This matches the reports coming from some of its Central American neighbours.

Vietnam is yet to sell their new crop, but with rising Robusta prices, how long will farmers be able to hold out? Current prices are around 40K VND which is nearly 25% high than this time last year. Once selling occurs, significant downward pressure will be placed on the market. Because Robusta is trading at close to half the price of Arabica, the demand this year is going to be strong, assuming Arabica prices sustain. Covid 19 is surging, and so Ho Chi Min City, with the second-highest death rates in Asia, remains in lockdown, now lasting over 100 days.

GBP/USD started the fortnight at 1.383 and remained under pressure from the Dollar as it gained a boost from the Federal Reserve’s meeting, hinting that they might raise interest rates earlier than expected and leading to a dip to 1.377. British MP’s voted for an increase in National Insurance to begin paying back the debts demanded by the Pandemic, which initially saw Sterling retake some ground and hovered around 1.382 until the 15th September when disappointing retail sales were announced for the fourth month in a row. By the 17th the Pound had lost more value and ended on 1.372. 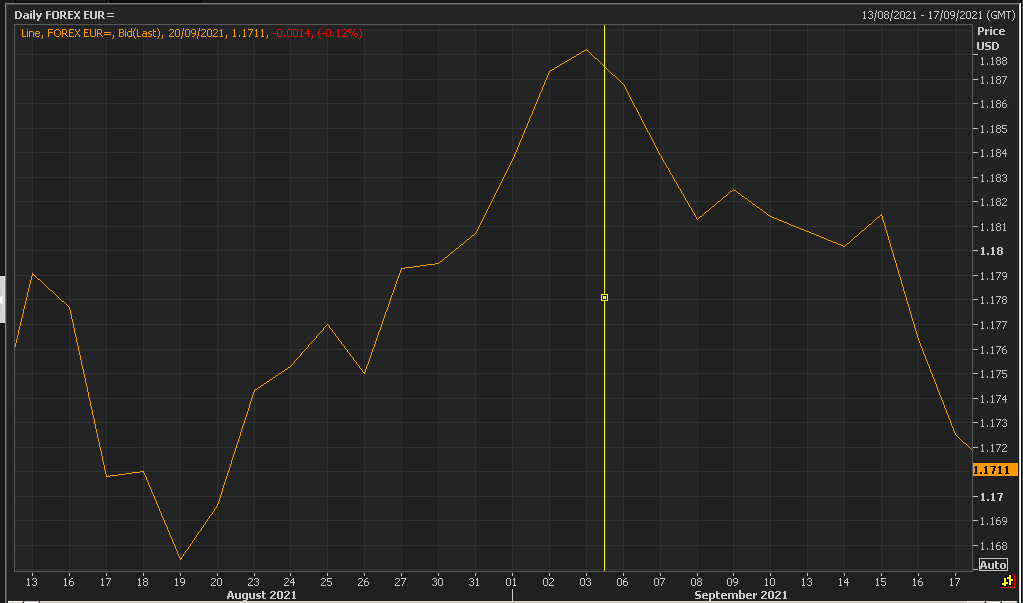 The Euro started the fortnight against the Dollar at 1.186; already running downhill, it dropped to 1.181 by the 8th September. Concerns about the world economy have given renewed value to the Dollar as a ‘safe haven’ currency which has caused the value of the Euro and many other currencies around the world to slacken against it. The US Dollar Index has strengthened from 92.2 to 93.3. The Euro traded sideways for a few days and initially looked like it might peak back again, dropping off and finishing on the 17th September just below 1.172.