Good day. Welcome to the fortnightly DR Wakefield Market Report for the period covering 5th of April to the 16th of April. 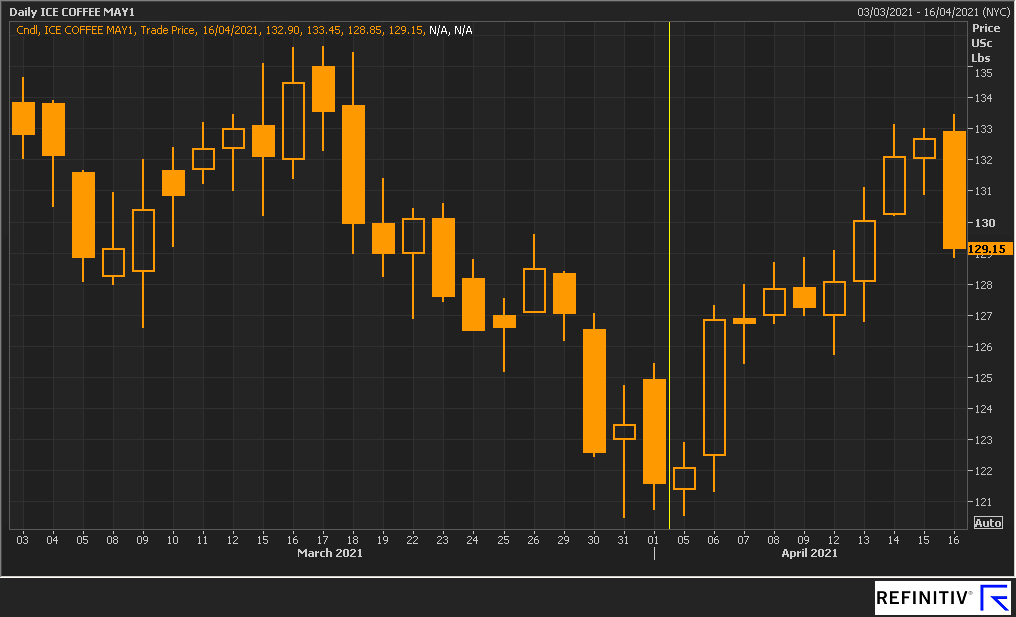 The Yellow line marks the start of the fortnightly reporting period and its positioning clearly demarcates a tale of two fortnights. The end of March experienced a strong bearish sentiment with the market hitting a high of 135.65 c/lb on March 17th and then nearly test the 120 c/lb level on the 31st. All the bulls disappeared and people were discussing how low the market would go when it smashed through the 120 c/lb support level. As you can see, from the 5th of April onwards it was turn of the bears to keep quiet. On the 5th of April, the market opened at 121.40 c/lb and 6 out of the next 9 nine days saw the market close higher than it opened. Coffee tracked upwards and on the 6th of April we saw a daily trading range of 5.95 c/lb. It was one of the dew days of 2021 where we have seen a range of more than 5 c/lb. The high of the fortnight was Friday the 16th where the market nudged up to 133.45 c/lb. However, we did see some value come off the board and it closed the week at 129.15 c/lb, 3.75 c/lb less than how it started. 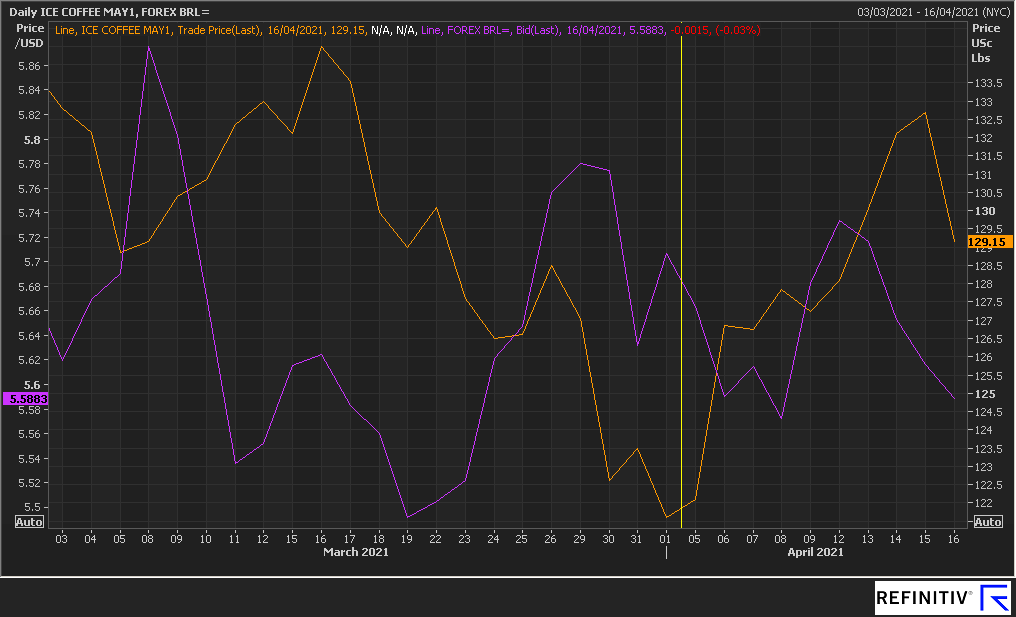 There was a period where the movement of the BRL/USD was a very reliable tool for predicting where the Arabica coffee market would go. It became so reliable, in fact, that it became many people’s favourite indicator as a tool to analyse the coffee market. Like all good things, they must come to an end. If you look over the last 6 weeks, although there are periods where there is a correlation, it’s not what is used to be. This does mean that the strong correlation will not come back, nor that the BRL/USD has ceased to be an important tool in your armoury-just that it’s not what it used to be. Do you have a new favourite indicator?

The CFTC’s COT report with the cut-off Tuesday 6th of April saw the speculators trim their position for the 5th week in a row. For that period they reduced it by 5,251 lots from 12,236 to 6,860 lots net long.

However, the COT report with the cut-off Tuesday 13th April bucked the 5-week trend and the speculators expanded their net long position by 4,457 lots to 11,317 lots long. This reflected the broad trend across all commodities save Robusta and Wheat.

Arabica certified stocks in April 2021 were slightly higher than they were for April 2020. In the months that followed the start of the global pandemic, Certified stocks saw a large draw down, but they have been building since the introduction of Brazil semi washed coffee to the board. This time last year Honduras represented a far larger slice of the pie but as it stands, Brazil, due to the semi washed coffees, takes pole position. 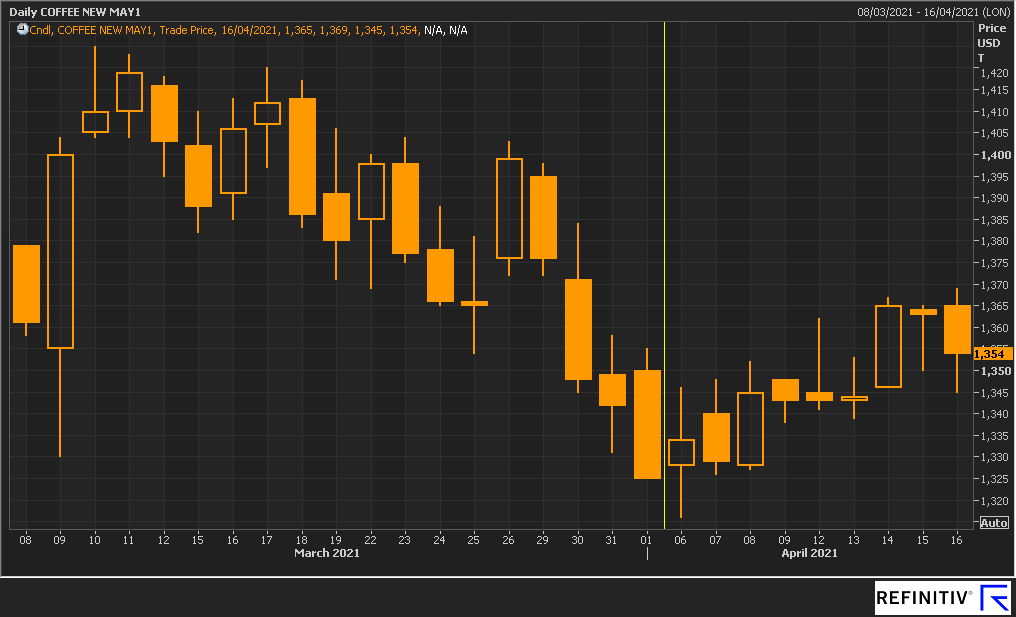 Just as we saw in Arabica, so too in Robusta did we observe a tale of two fortnights. Unlike Arabica which did see some trading action on Easter Monday, the Robusta market did not open. On Tuesday the 6th of April it opened at 1,328 $/mt and it stymied the bearish tide of the previous week. It could not quite surpass 1,370 $/mt, but it did close the 16th of April at 1,354 $/mt.

Brazilian export data from a recent CECAFE report reveals an interesting recent trend. Exports for January to March 2021 increased by 10.4% compared to Jan-March 2020.  However, March 2021 was 1.6% less than March 2020. The next crop is expected to be much lower than expected and fears of a supply shortage are compounded by the fact that many people think that there is a much smaller % than usual available to ship as November 2020 to March 2021 saw such large amounts of coffee shipped. Can you guess the top 5 destination countries for Brazilian coffee? In order of largest to smallest: The US; Germany; Italy; Belgium and Japan.

The March coffee market report from the ICO showed that: ‘Compared to the first five months of the coffee year 2019/20 (October to February), exports from Mexico & Central America fell by 17.4% to 4.2 million bags as parts of the region have not yet recovered from the severe impact of hurricanes Iota and Eta.’ The most salient point was that shipments from Honduras, the region’s largest producer, fell by 30.7% percent to 1.4 million bags. There was one good news story, Mexico’s exports increased by 20.8% to 1 million bags.

Vietnamese pricing is edging upwards due to data coming out of Brazil that suggests a significant drop in output of their upcoming crop. There is not much left of the Vietnamese crop left to sell so farmers are holding onto their coffee still as they expect pricing to continue to increase. Meanwhile, in Indonesia, supply has started to build as the crop has started a little earlier than usual. 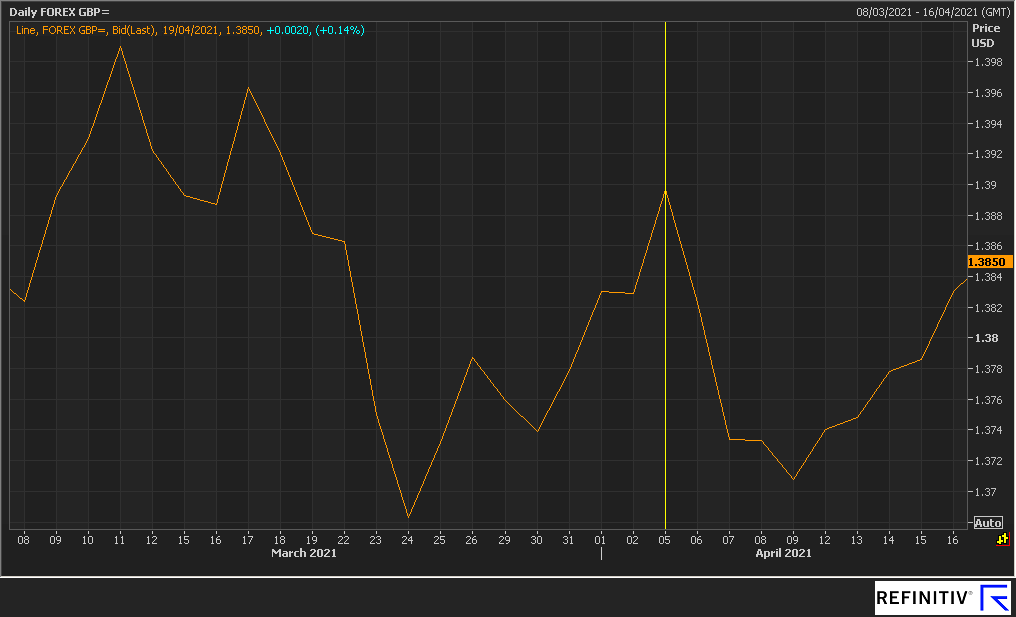 On Monday 5th of April 1 Pound Sterling bought you 1.389 USD. It could not continue the momentum of the previous week however, and 1.389 would prove to be the highest point of the next couple of weeks. It saw a sharp drop in the opening few days of the week and on the 9th hit 1.371. The Major US stock indexes in the US hit record highs and with large numbers of jobs being created, there was an increase in demand for US Dollars. The drop in value of GBP/USD was more to do with the Dollar strengthening as opposed to the Pound weakening. In fact, on the 5th of April the Pound hit a 13-month high against the Euro. Back to the Dollar though. GBP/USD did not test the 1.370 level and quickly rebounded, spending the following 7 days slowly climbing to finish the week at 1.383. 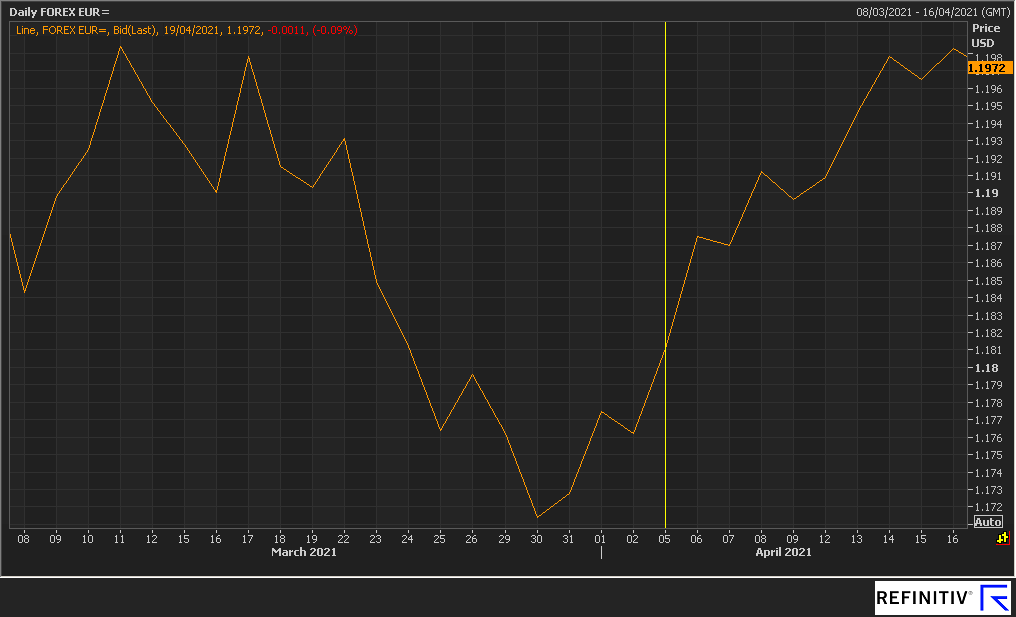 The Euro fared very differently than the Pound against the Greenback. Although the Euro had a bad second half of March against the Dollar, at the end of month it began to claw back some of the value it had lost since March 11th and this did indeed continue into April. It opened Monday 5th of April at 1.181 and this was the lowest it would be for the following 2 weeks. Although the vaccine rollout had been weighing down on the Euro, there were signs that the rapidity of the rollout was improving and this was a cause for strength, not weakness. Services and manufacturing data in Germany and the Eurozone were better than expected in March and this strengthened the trend. On the 7th of April it nudged over 1.19 and although it suffered a slight pullback on the 8th, this was not to last. It continued to soar skyward for the rest of the month, and finished Friday 16th at 1.198.

We hope you enjoyed the report and see you in May!