Good day. Welcome to the fortnightly DR Wakefield Market Report for the period covering 3rd of May to the 14th of May. 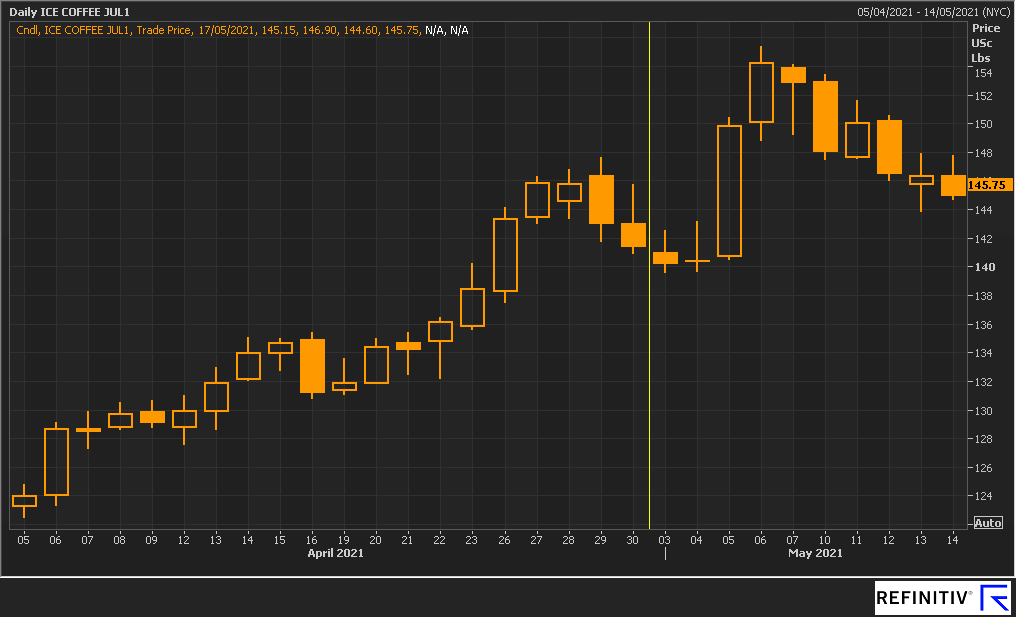 9.65 c/lb. Close, but no cigar. On May 5th there was a daily trading range of nearly 10 c/lb, a figure we have not seen for quite some time. A cursory glance of the NYC’s movements over the past 12 months would suggest it has been at least a year since we have seen a move of this magnitude. The reason? The speculators piling in with buy orders. A general rise across commodities encouraged the move and the broader macro positivity fuelled its momentum. Concerns over inflation are seeing many funds diversify further into commodities as a hedge. Was Janet Yellen’s slip up on inflation a slip, or a cheeky nudge to the Fed’s to act? Who knows, but what is clear is that people are still talking about the issue 2 weeks later!

April saw the coffee market trend upwards, save the correction at the end of the month. Monday 3rd of May opened, and we weren’t sure if the correction had more legs or whether it would tick up again. After a couple of days trading sideways, we experienced the big day aforementioned. Friday 7th of May closed at 152.90 c/lb, 11.9 c/lb higher than market open on the Monday prior. Monday 10th saw the market open at 152.95 c/lb and it trended downwards for the rest of the week to close Friday at 145 c/lb. There are talks we are now in a 140-170 c/lb range. More reasons to be bullish than bearish at the moment, especially on the fundamental side.

The CFTC’s COT report with the cut-off Tuesday 4th of May saw the funds add a meagre 304 lots to their net long position, bringing it up to 33,869 lot net long. This is in stark contrast to the 17,314 lots added the week before!

Interestingly enough, the net long position in the COT report with the cut-off Tuesday 10th did not mirror the fireworks we saw that week when the market surged. The non-commercial net long only added 794 lots, to total 34,663 lots. Although it only increased by 797 lots, the Net Long Index Traders position set a new record net long of 79,230 lots. As people look to invest in commodities as a hedge against inflation, it will be interesting to see how the Index Traders position develops. Perhaps we will continue to see net record longs?

What about Arabica certified stocks though? They continue to build. This time last year they were 1.76 million bags and now they are at 2.02 million bags, just shy of a 15% increase. 1.96 million bags is the 10-year average. It will be interesting to see their growth over the coming months. Given much of their recent growth has been driven by the semi washed in Brazils, if the harvest is indeed lower, what origin will pick up the slack? If any? 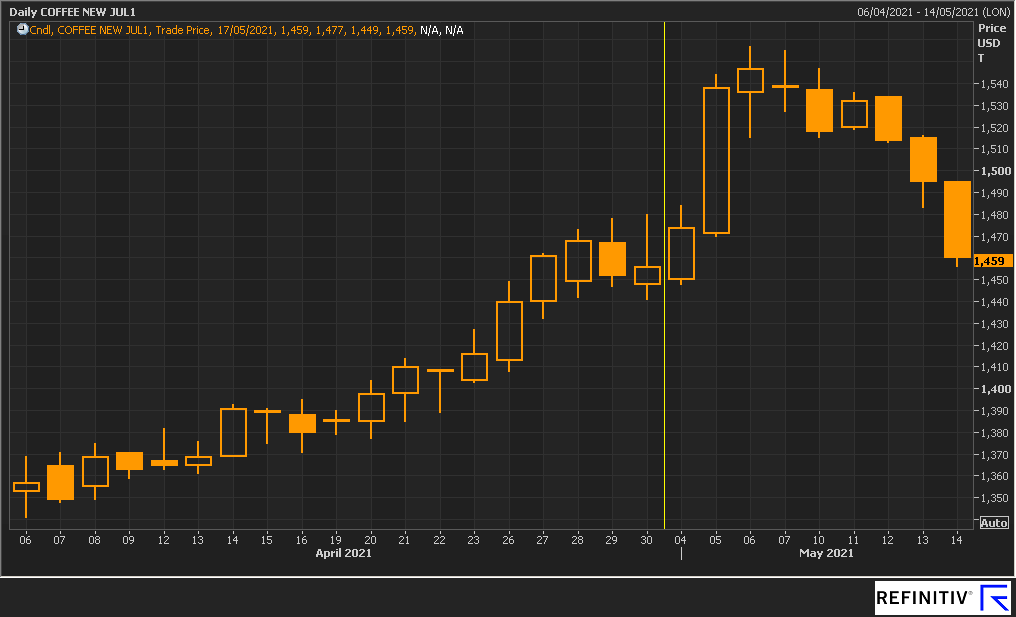 Wednesday 5th was also a big day for Robusta. Like Arabica, it went on to hit a fortnightly high on the 6th before trending downwards. However, unlike Arabica, which managed to hold onto some of the value it gained, Robusta closed the fortnight only 10 $/mt higher than how it started, finishing at 1,460 $/mt on Friday 14th May.

The lower crop size in Brazil has been the talk of town. Added to that, there is now further negativity in the narrative surrounding the size of the beans. Some exporters are stating that it will be harder and therefore more expensive to secure the bigger screen sizes. By the end of June, we’ll have more detail on what size crop we’ll be facing and whether or not there are screen size issues. BRL/USD is trading around 5.3 and has been less volatile of late.

Civil unrest continues in Colombia, with the worst affected areas in Valle Del Cauca and Cauca, in southern Colombia. Last Monday (10th May), the President Ivan Duque visited Cali, Valle Del Cauca, and asserted that more military resources would be used to remove the blockades. This was no empty threat and the Colombian government has been criticised for its use of excessive force with many deaths occurring during the clashes between protesters and the police. The flow of coffee has indeed been affected and shipments are expected to be delayed for the next 3-4 weeks.

The Peruvian harvest is already well sold. Many cooperatives report they have sold between 50-80% of the crop. Internal prices remain sky high as some of the larger exporters are still paying well above the market to secure the physical for their large short positions. This has distorted the market and has made the market for certified coffee (Peru is a large producer of FT, Organic, Utz and RFA coffee) complex. More cooperatives and associations are offering coffee for export, a trend that has strengthened over the past couple of years and will no doubt be making it harder for the shorts in the market to close out their positions. 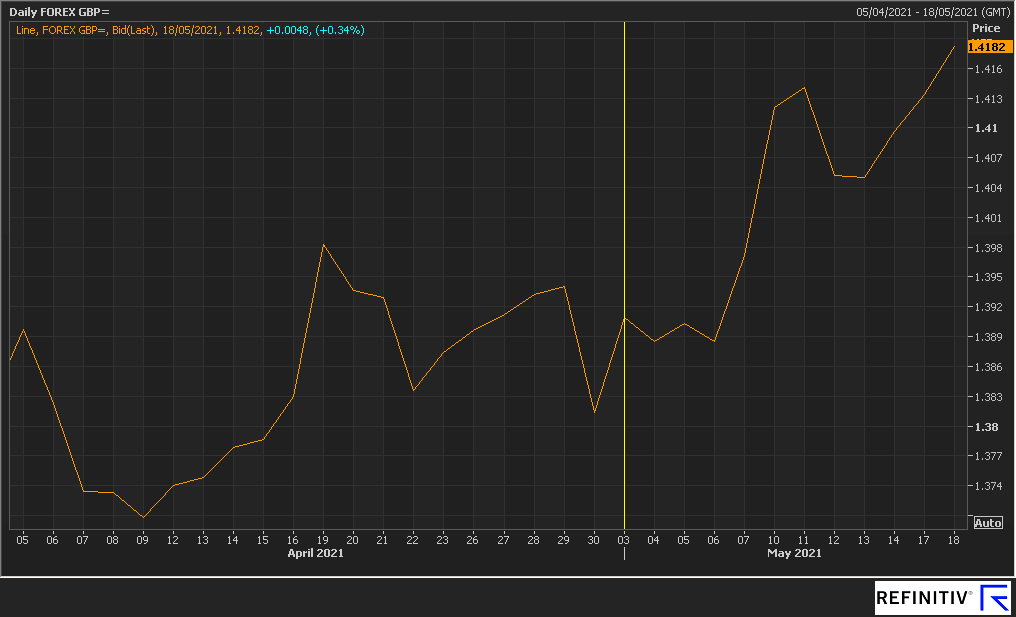 On Monday 3rd of May 1 Pound Sterling bought you 1.390 USD. It traded sideways for a few days before appreciating to 1.414 on the 11th of May. Given New York’s rapid rise over that period, this helped ensure we didn’t have two factors increase £/mt for UK roasters. The increase was due to election results: a strong performance by the Conservative Party in local elections combined with the SNP’s inability to secure a majority both provided support for the Pound. The Pound was undermined by higher US yields and weaker equities which saw it dip to 1.405 on the 13th before ramping up to finish Friday at 1.410. 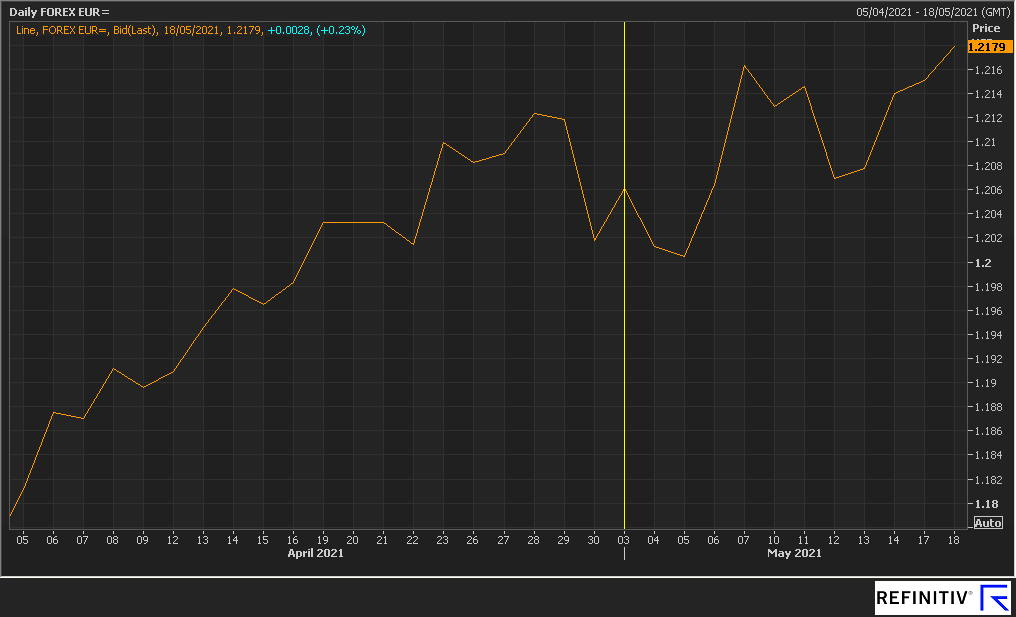 1 Euro bought you 1.206 US Dollars on Monday 3rd May. It slid in value over the coming days but did not test the 1.20 support level and started a 2-day ascent to 1.216 on the 7th. The strength of the US Dollar weighed down on the Euro and pushed it down to 1.207 on the 12th. Positive economic news coming out of the Eurozone provided it with support however, and it finished the week strongly at 1.214.

We hope you enjoyed the report and see you in June!