Good day. Welcome to the fortnightly DR Wakefield Market Report for the period covering Monday 31st of May to Friday 11th of June. 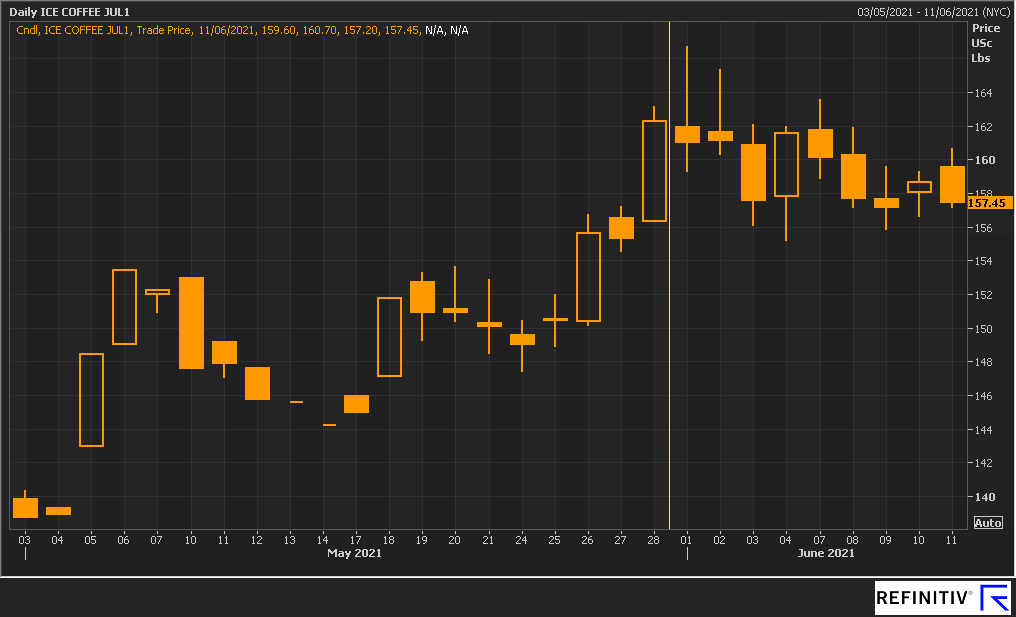 New York was closed on Monday and on Tuesday 1st June it opened at 162 c/Ib and, even though it rallied to a high of 166.75 c/Ib overall, it dropped to a low of 159.30 c/Ib and ended the day at 161.05 c/lb. This represents a 7.45 c/Ib change, the greatest intraday trading range of the fortnight. The next couple of days saw it drop further and June 4th witnessed its lowest value of 155 c/Ib, but it did manage to rally and end slightly higher than the previous day before close of play. For the remaining portion, the market traded sideways and settled on the 11th of June at 157.45 c/Ib. Further news about the size of the next Brazil crop is not likely to roll in until early July, meaning many market players are tentatively waiting on what position to take and unwilling to build out any current positions they currently find themselves in.

The CFTC’s COT report with the cut-off Tuesday 1st of June saw the specs continue their upward trajectory, just as they have done in the past 5 weeks, increasing their net long by nearly 7000 lots to 42,156.

The CFTC’s COT report with the cut-off Tuesday 8th of June demonstrated a switch of direction from the previous week and a small sell-off by the non-commercials brought the net long position back down to 40,297.

Certified arabica stocks are continuing to grow, reaching 2.13 million bags. They currently stand at 480,000 bags higher than this time last year and above the 2, 5 and 10 year average. Will this increasing volume have the ability to offset the proposed small crop from Brazil and help to reduce market volatility? 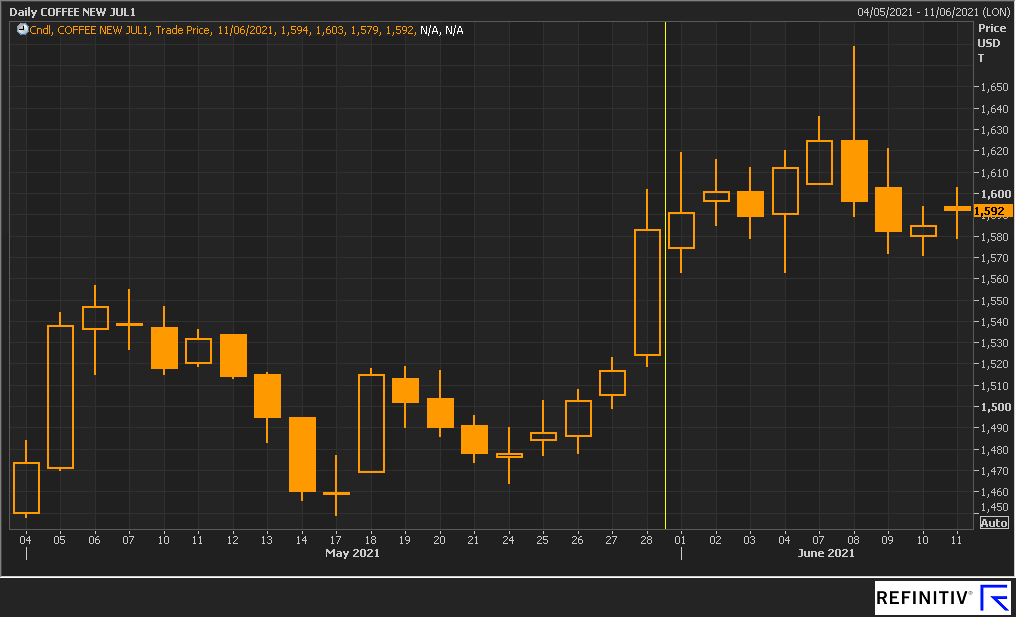 London was closed for the Spring Bank Holiday on Monday 31st of May. The week prior it had gained over 100 $/mt and the question on everyone’s mind was, “were we going to see another 100 $mt week?”. Tuesday’s open was 1,574 $/mt and, although did Robusta gain some value, it was not to the same extent as the previous week. Monday 7th continued the trend upwards and on Tuesday 8th the market did hit a high of 1,669 $/mt, but could not hold this lofty level, and plummeted to a close of 1,596 $/mt. It finished the fortnight out at 1,592 $/mt, 18 $/mt higher than it began.

Much talk has centred on the 21/22 Brazil crop and the fact that it could be much smaller than originally expected. What about carryover stocks though? The Montesanto Tavares Group released a report regarding the carryover stock position on March 30th, 2021, and at that point in time there were 19.4 million bags of Arabica, 44.9% more than when the survey was carried out for the same period in 2020. These figures suggest that even if there is a small crop in Brazil, there shouldn’t be any problems meeting global coffee demand. That is assuming that you can get coffee out of Brazil though. The shortage of food grade containers continues with some exporters compromising on the quality of containers to get physical out of the country. BRL/USD remained strong and finished the reporting period at 5.11.

The situation in Colombia has improved, but is far from resolved. Coffee is now shipping out of Buenaventura but the South in particular remains in turmoil. Cartagena picked up some of the slack when Buenaventura was blocked, but it is estimated that we now face a 2-3 month backlog of shipments as a consequence. Food pricing has risen due to blockades across several cities and domestic coffee prices are the highest ever recorded in the history of Colombian coffee production. Differentials have firmed up as a result, but nobody is offering before August shipment in any case.

Another country facing difficulties regarding exports is Ethiopia. They are facing a shortage of food grade containers, and this has hampered exports for a couple of months now with many FOB Djibouti shipments suffering serious delays. In May the first ships docked at Kenya’s second deep water facility, the port of Lamu. Its construction began in 2014 and is being built by the China Communications Construction Company. The aim of the port is to compete with Djibouti and Mombasa. Perhaps we’ll see some FOB Lamu contracts in the future for Ethiopian coffee? For that to happen much work needs to occur connecting Lamu to the borders of South Sudan and Ethiopia. Watch this space. 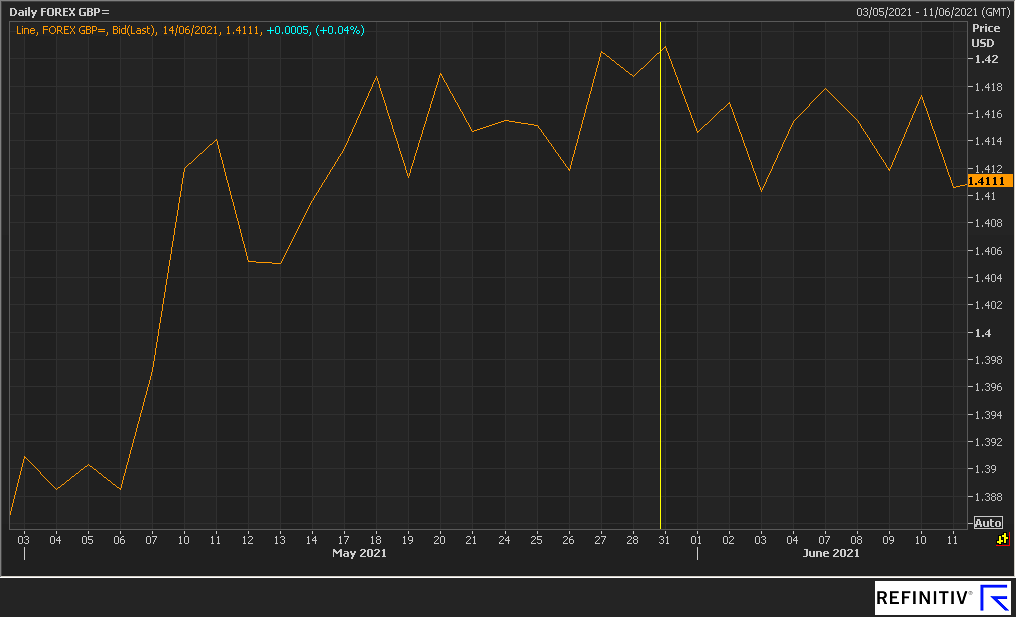 On the 31st May the Pound sat above the Dollar to mark a new 3 year high of 1.425. However, as more news about the 21st June reopening delay dripped into the media, scepticism about the UK’s economy during the summer months grew and the value of Sterling began to fall. The next few days watched it lower to 1.41 but it did regain some of this ground by the 7th of June. The final days saw it bounce up and down (seemingly trying to impersonate Bart Simpson’s hairline) once more and the Pound finished 0.014 US cents weaker. When looking at the peaks and troughs here it’s important to note that Sterling remains in a stronger position than at almost any time since Brexit. The G7 summit is likely to be a big factor determining this and other currency pairs over the coming days. 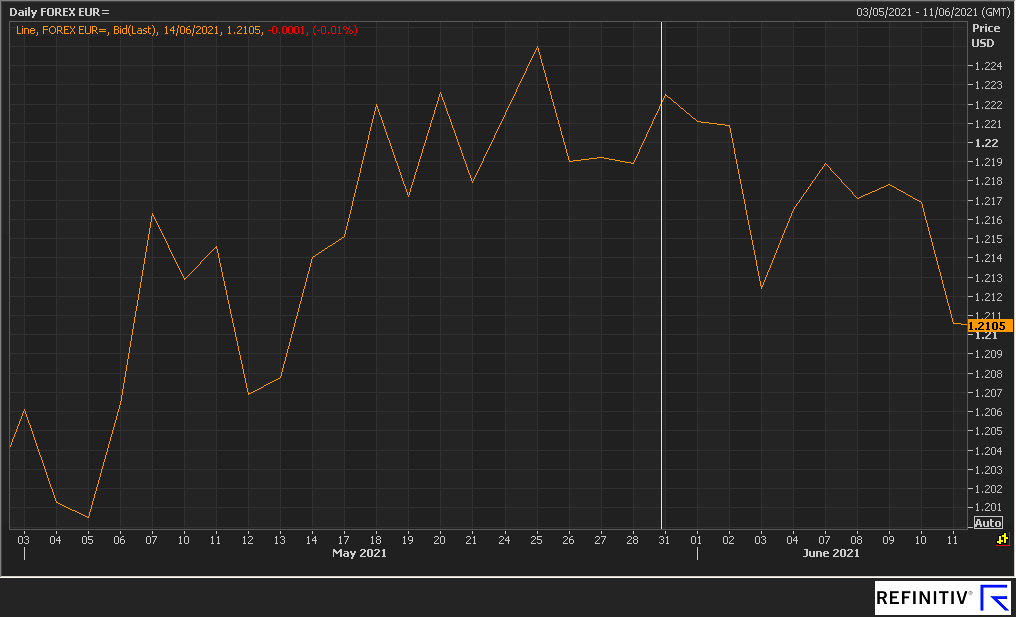 1 Euro bought you 1.222 USD on Monday 31st of May. Positive economic data coming from Germany provided support for the Euro and statements opining that inflation in the Eurozone was most likely short-term held this support as the Euro traded sideways for the first couple of days of the week. This was not to last however, as on the 2nd it sunk to a 2-week low of 1.212. This was more down to Dollar strength than Euro weakness however, as Pound Sterling also lost significant value against the Greenback that day. It closed the week out at 1.216. Monday 7th saw the trend upwards continue. The Euro tried to push through 1.22 but could not get past 1.219 and after this spent the following few days slowly trending downwards before plummeting once more to reach another 2-week low of 1.211.

The Eurozone is recovering but as always, the data presented is an average of the member states and recent figures suggest that the timing of when Eurozone economies will recover the ground lost by the pandemic is varied. It’s forecasted that Germany will close the gap by the end of the year but that Italy and Spain may not get back to their 2019 levels of GDP until 2023. This divergence may undermine the Euro moving forward and is certainly something to look out for.