Good day. Welcome to the fortnightly DR Wakefield Market Report for the period covering Monday 28th of June to Friday 9th of July. 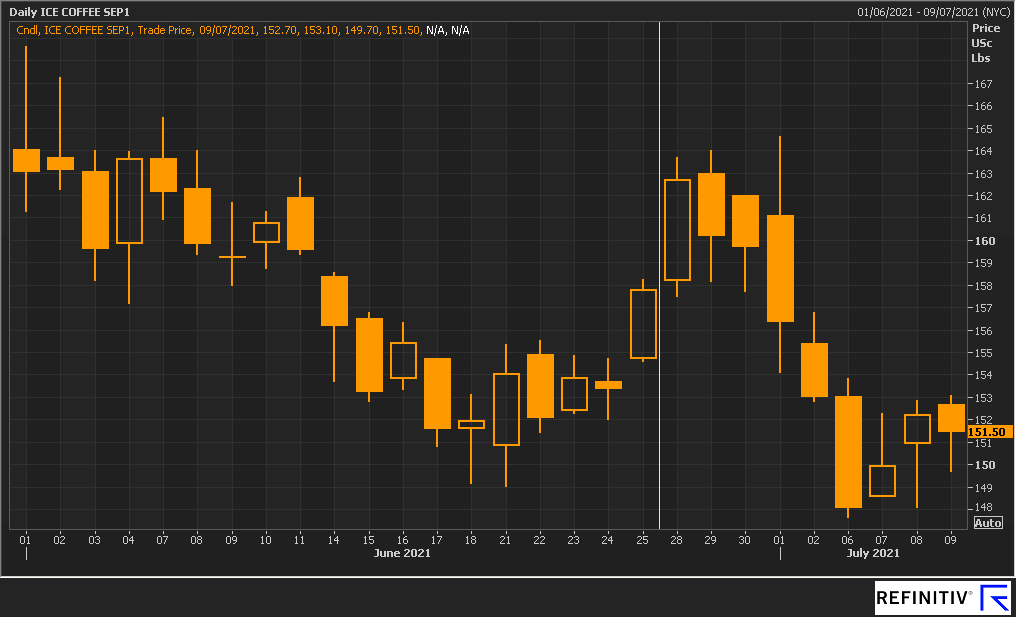 New York opened Monday 28th of June trading at 158.20 c/lb and shot up to a high of 163.70 c/lb, before closing at 162.70 c/lb. The next couple of days had similarly sized daily trading ranges, but both closed lower than they started. Thursday 1st of July enjoyed a whopping 10.55 c/lb daily trading range! We saw the fortnightly high of 164.65 c/lb and a low of 154.10 c/lb before landing on 156.40 c/lb. A weakening BRL saw Friday continue the downtrend, but not to the same extent as the previous day. The following Tuesday was the 5th day in a row where the market closed lower than it started, and the bears were out in full force, predicting 140 c/lb could be tested. In the end, this was not to be the case as the market ticked upwards and the week closed at 151.50 c/lb, 6.7 c/lb lower than it opened the fortnight.

The CFTC’s COT report with the cut-off Tuesday 29th June saw the non-commercials pad out their net long position and add 5,054 lots to make it 31,515 lots net long.

In the CFTC’s COT report with the cut-off Tuesday 6th July however, the non-commercials net long was slashed by 8,150 lots to 23,365 lots long. This was driven by a combination of long liquidation and fresh shorting on the downtrend. Conversely, the index traders net long increased, as well as the Commercial net long position. 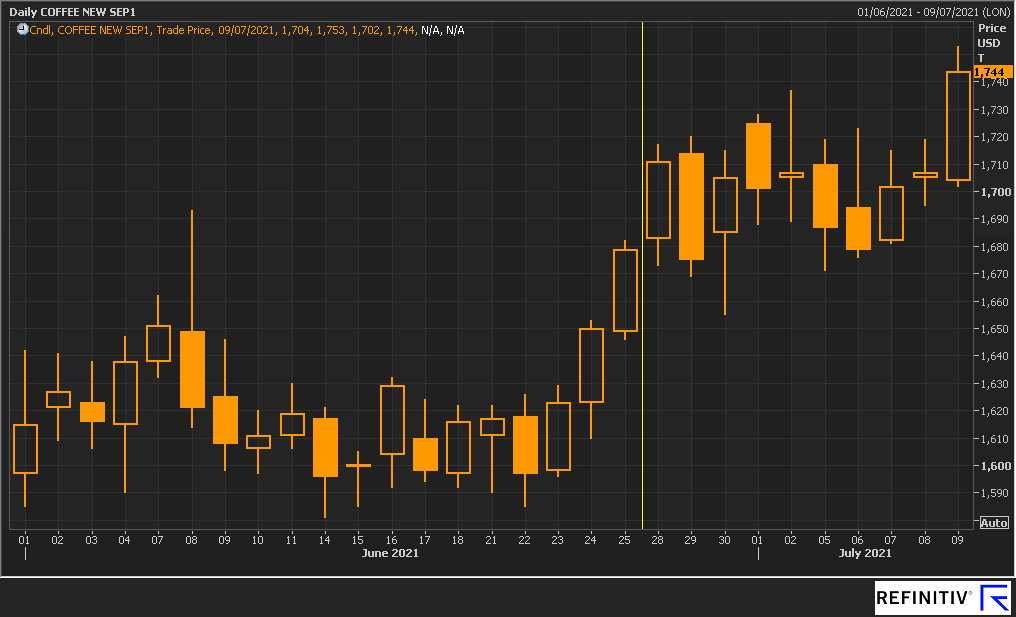 Frost! At the end of June, there were frost alerts in the south and southeast of Brazil. However, data in early July showed no significant impact on the main coffee producing areas, so the frost scare was short-lived. What is concerning is the lack of rainfall. Last week precipitation in Minas Gerais was 2% of expected for this time of year. The water crisis also affects the reservoirs of hydroelectric plants, meaning the drought is a concern for Brazilian coffee producers and consumers alike, with the rising energy costs on the way. The BRL weakened against the US Dollar to 5.25.

The vaccination rollout in Peru is going slow, but it is progressing. It’s expected that at the end of July a large number of vaccines will arrive, but it’s still unclear how they will be distributed. The main areas of concern are the larger cities of Lima, Piura, Cuzco and Arequipa. Arequipa, in particular, is going through a challenging period. In Jaen, the coffee capital of the north, the situation has improved. However, hospitals are at full capacity even there, and it’s difficult to find beds for new patients. Nevertheless, the harvest is well underway, and next month we will see FOB shipments start to ramp up, peaking in October/November.

There has been much coverage about Ethiopia and the Tigray region. A few weeks ago, the Tigrayan fighters defeated two of Africa’s largest armies, Ethiopia’s and Eritrea’s, to reclaim Mekelle, their capital. The longer the war goes on, the more work will be needed to unite the various federations that comprise Africa’s second-most populous country. On the weekend, the incumbent President, Abiy Ahmed, the first Oromo to lead the country, won another general election. This means he will stay in power for another term. How he manages Tigray will likely define his next term. 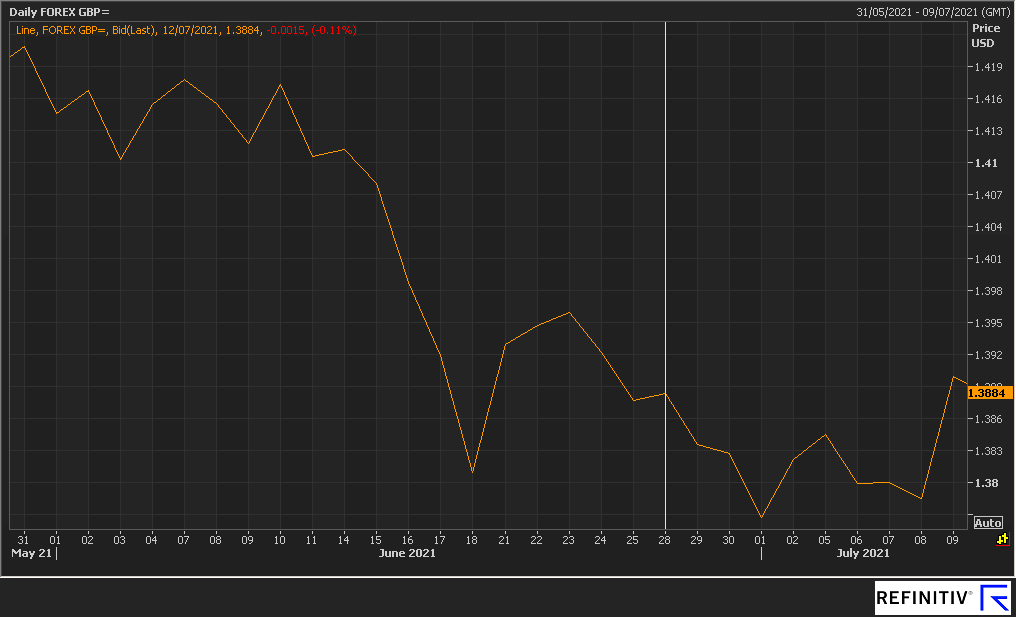 The US Dollar strengthened against its key currency pairs, with the USD index surpassing 92, a level we have not seen since April. If the global recovery picks up the pace we may see the USD weaken as money is directed away from this safe haven. However, with so much uncertainty still ongoing, this USD strength could be here for longer than the short term. The decision by the Bank of England to keep rates on hold and maintain the current asset purchase target on the 24th of June encouraged a further loss in value of Pound Sterling against the USD. GBP/USD started the fortnight trading at 1.388 and slumped to a low of 1.367 on Thursday 1st of July. It finished the fortnight back up at 1.388. Although it did lose a great deal of value against the Greenback over the past six weeks, it fared comparatively better than most other G10 currencies over the same reporting period. 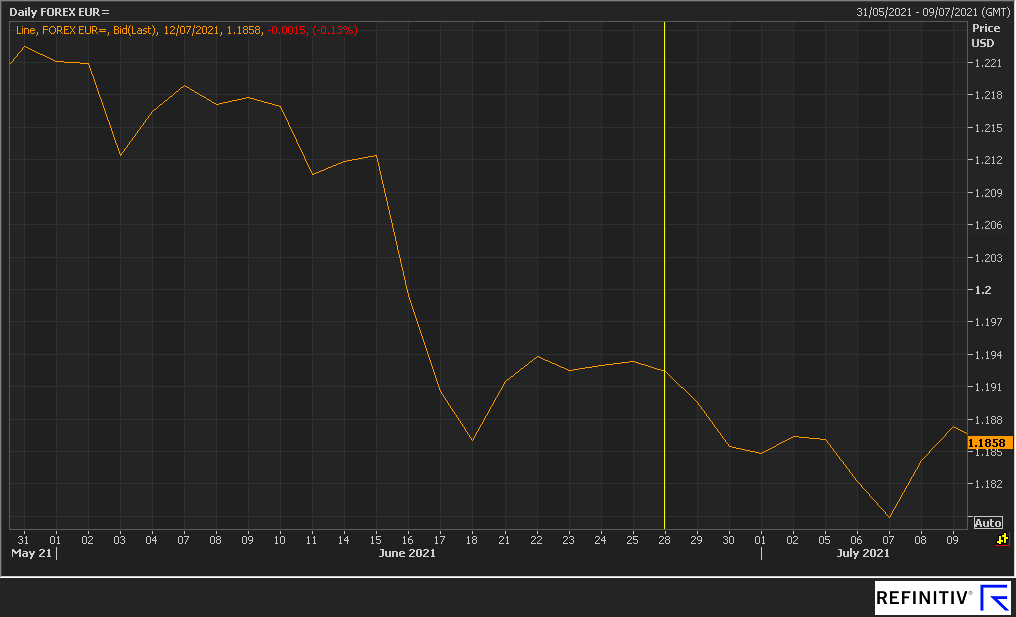 Unlike the Pound, the Euro was of the G10 currencies that underperformed against the USD. It opened Monday 28th June at 1.192, representing the highest value it would post over the fortnight. The Eurozone economic recovery may have provided support to the Euro, but European Central Bank President, Christine Lagarde, said it was at risk of losing momentum due to the mutating virus, even as the vaccination programmes gather momentum. “Of course, the nascent recovery still faces uncertainty also due to the spread of virus mutations,” she said. EUR/USD fell to a low of 1.178 on the 7th of July and managed to claw back some value by Friday’s finish, closing out at 1.187.

The ECB is beginning to debate whether to cut back on its massive bond-buying programme as the economy emerges from its coronavirus-induced slump, as divisions emerge between policymakers in different countries. This uncertainty, coupled with the Fed’s movements that are increasingly hard to predict, is leaving everyone guessing as to where the currency markets are going.

Fortnightly Market Report, for the period covering 28th of June to the 9th of July focusing on the futures market and news from origin.