Good day. Welcome to the fortnightly DR Wakefield Market Report for the period covering Monday 26th of July to Friday 6th of August. 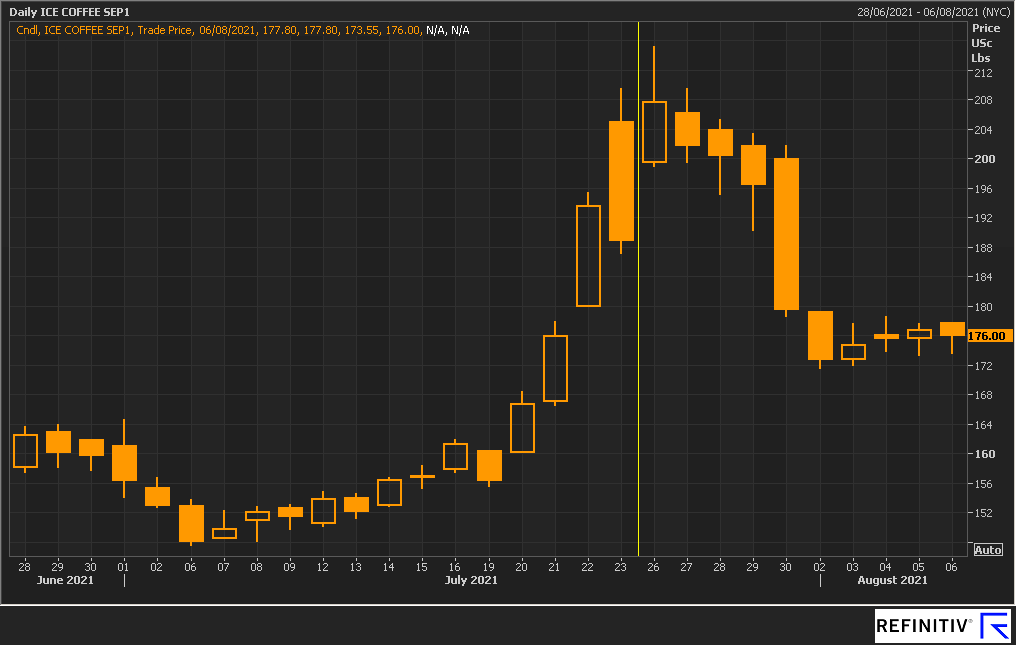 New York gained 28.5 c/lb from market open on Monday 19th of July to market close on Friday 23rd of July. As you can see from the graph, Monday 26th of July took the market to new highs and we hit 215 c/lb. However, it could not hold this level, and it closed out the day at 207.80 c/lb. There was talk of 250 c/lb and some people were saying that was a ‘bearish’ view and that actually 3$ was a more accurate forecast. In many ways it felt like the Gamestop saga: many strong differing opinions, volatility and uncertainty. The narrative for the remainder of the week was dominated by the expected cold front that would hit Brazil on Thursday. If you thought the cold front was going to be as frosty as the previous one, you were a bull, and if you thought it was all hot air, you were a bear. In the end, although there was a cold snap, it didn’t have the bite of the previous one, and on Friday we saw the market close at 179.55 c/lb, 20.45 c/lb lower than its open at 200 c/lb.

The following week was tentative. The market took the opportunity to take a breather and take stock of what had happened over the previous 2 weeks, closing on Friday 6th of August at 176 c/lb. The market opened the big bull week of w/c 19/07 at 160.50 c/lb. Has the market priced in the frost in Brazil at around 15-20 c/lb? And how does coffee compare to other commodities? Is the sustained commodities bull run still surging? 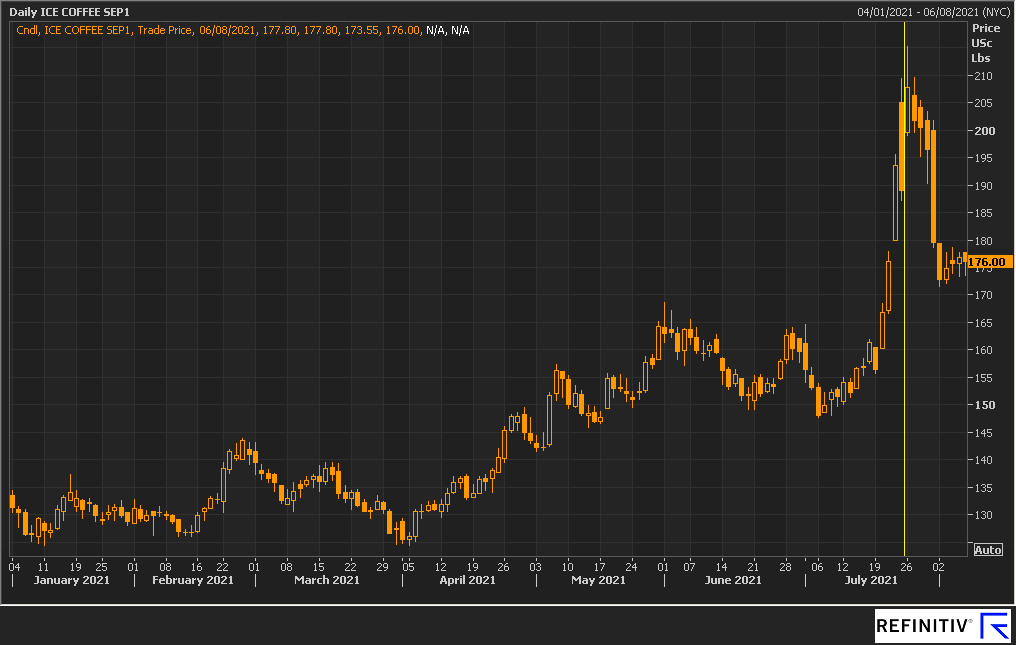 Bloomberg’s analysis in their August Commodity Outlook show that “Java Highs typically don’t last long” and they put forward the view that unless the S&P 500 declines by more than 10% since the 2020 swoon, they see all commodities at risk of reversion to mean and a trend downwards.

When we see flowering in Brazil next month, we will get a more accurate picture of the extent of the frost damage. Will the damage shelter coffee from a potential bear run across commodities? What’s certain is that when the flowering occurs, the uncertainty surrounding the damage will be greatly reduced.

The CFTC’s COT report with the cut-off Tuesday 27th July saw the non-commercials reduce their net long position and remove 210 lots to make it 32,923 lots net long. Although there was a change of only 210 lots to the net position, there was a decent amount of change to the Gross Long and Gross Short positions.

In the CFTC’s COT report with the cut-off Tuesday 3rd August, there was evidence of much less activity from the non-commercials with only minor changes to their Gross Long and Gross Short positions. The Non Commercial Net Long increased by 891 lots to hit 33,814, the largest position in the last 7 weeks. On the Commercials side, the Gross Short added 41 lots and set a new record position of 218,307 lots. 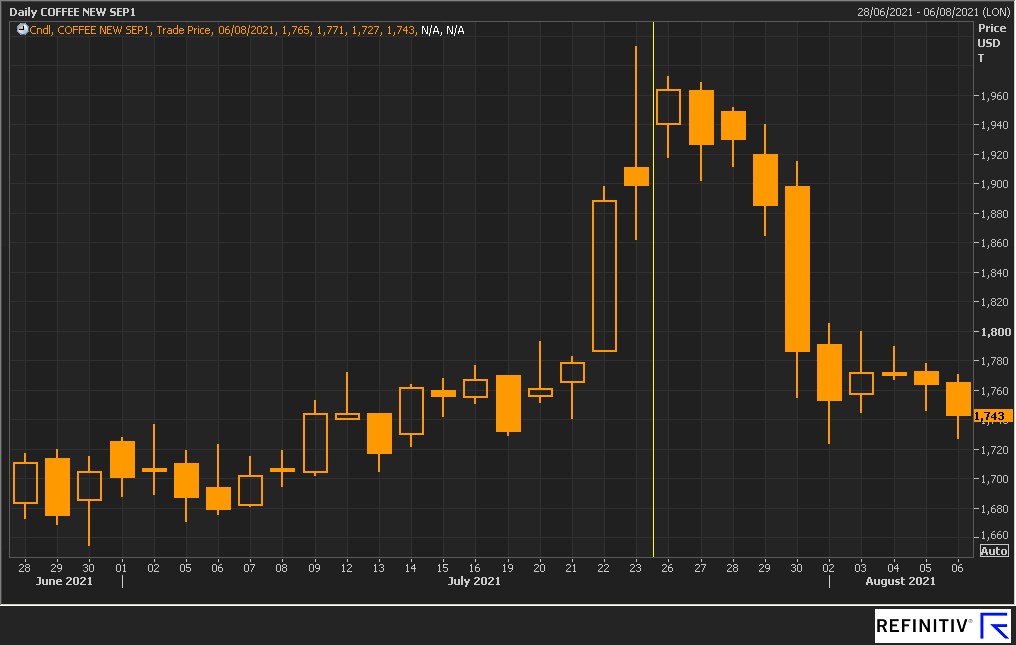 Robusta opened the fortnight at 1,940 $/mt and broadly mirrored Arabica, trending downwards for the first week before plummeting hard on Friday 30th, closing the day 112 $/mt lower than it opened. The following week was tentative and saw a good deal of sideways trading with uncertainty abounding.

The Brazilian government decided to raise interest rates by 1% in a bid to combat inflation. This is the largest increase since 2003 and could see the BRL further strengthen. Weather forecasts now point to a dry August and higher temperatures than for this period compared to last year. No significant rains are forecast for this month, but they are predicted for September, which is very important for the coffee flowering stage. It’s estimated that over 3/4 of the harvest has occurred. Logistics continue to be a challenge with container shortages, high freight costs and trouble getting bookings and avoiding them being rolled.

In Colombia, demonstrations continue in different parts of the country. Initially in response to proposed tax reforms by President Ivan Duque back in April, the National Strike has evolved and takes various forms depending on which department you are in. It is now possible to ship coffee out of Buenaventura, and milling has resumed. However, public discontent remains, and until negotiations between the government and the National Strike Committee find a suitable solution for both sides, this will linger. The vaccine rollout continues, and currently all people over 50 have been offered both doses of the vaccine. Healthcare and Covid-19 support workers are already fully vaccinated, and now people in their forties are being vaccinated too.

It’s become extremely challenging and costly to ship coffee out of Asia. Vietnam is no exception. Even if you are prepared to pay over the odds to ship a container out, there is no guarantee your booking will not get rolled. Exports have dropped over the past few weeks due to declining farmer stocks, container shortages, high freight rates and the spread of Covid-19. Figures suggest Vietnam has exported 9% less in July 2021 compared to July 2020. In addition, most of the physical left from the current crop has been sold, so farmers are not benefitting from the higher futures pricing. 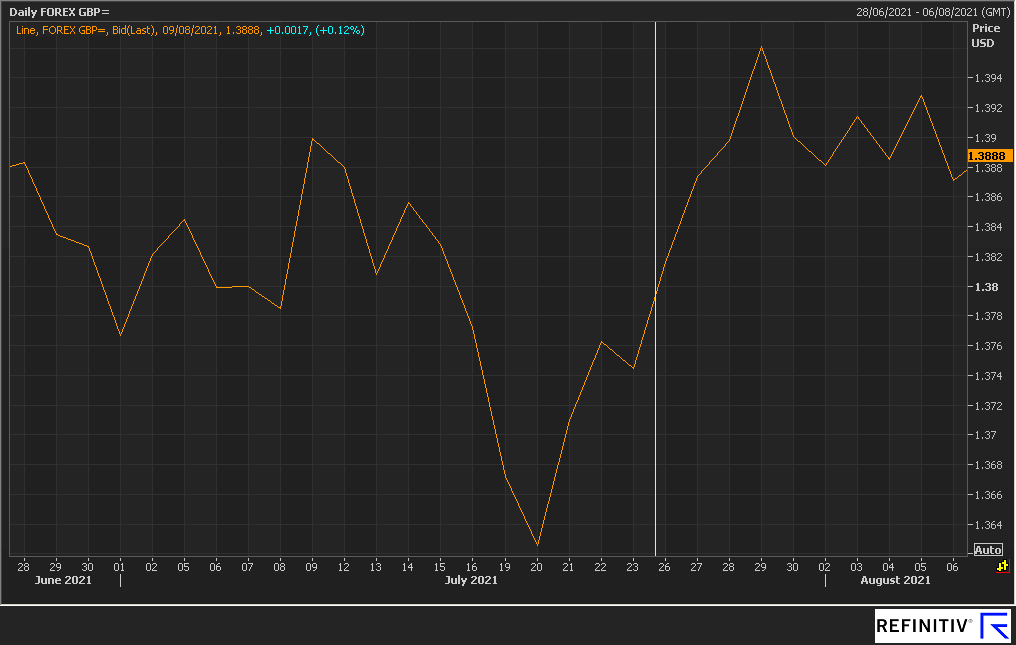 GBP/USD started trading at 1.380, and Pound Sterling benefitted from 6 consecutive days of Covid-19 infection rates falling. Sterling continued to rise, despite another Bank of England (BoE) rate-setter (Gertjan Vlieghe) coming out against more interest rate rises. It finished July having gained back all the value it had lost against the Greenback over the month. On Thursday 6th of August, the BoE unanimously voted to keep its interest rates at a historic low of 0.1%, while voting 8-1 to leave its bond-purchase programme unchanged, even as they see inflation jumping to 4% by the end of the year. If we see USD weakness going forward, combined with the recent strength of the Pound, we could see GBP/USD move a good deal higher. The currency pair finished the fortnight trading at 1.388. 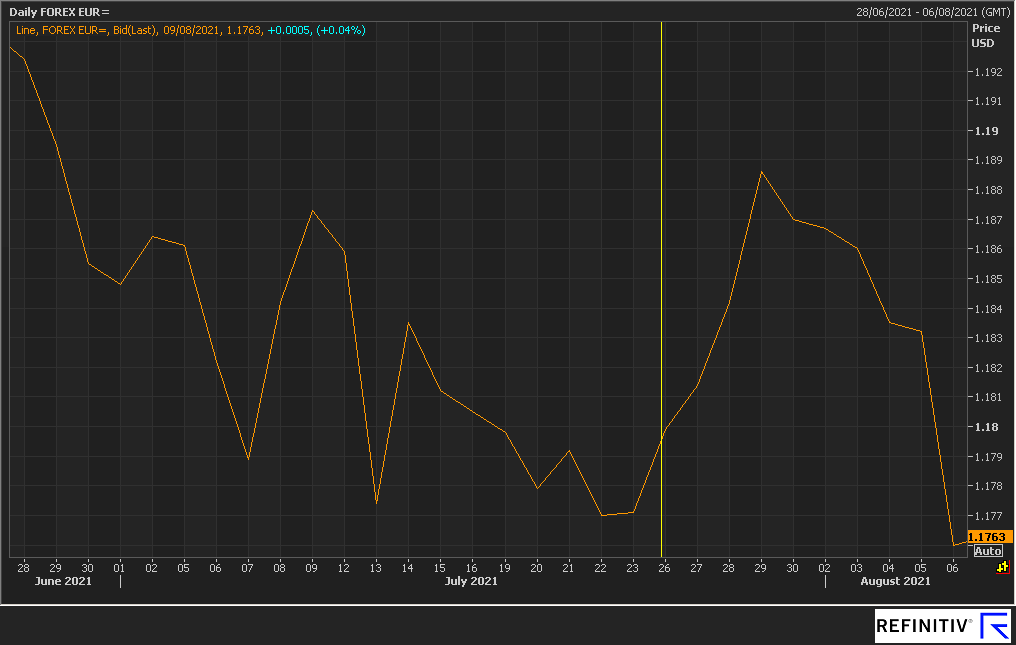 In a similar vein to the Pound, the Euro strengthened against the US Dollar in the opening few days of the fortnight. It started at 1.179 and rose to 1.188 on the 29th of July. It could not maintain this momentum, however and, unlike Sterling which regained the value it had lost, the Euro spent the rest of the fortnight losing value and pushing through the 1.177 level it had hit on 22nd of July to finish on 6th of August trading at 1.176. This was largely down to the lack of investor confidence surrounding the Eurozone, with it lagging the US on various different indicators. New quarantine restrictions in Germany also muddied the optimism surrounding a recovery. The end of August will be a crucial time of reflection for many economies that are in the process of trying to re-open up society and rebuild the damage that Covid-19 has caused.