Good day. Welcome to the fortnightly DR Wakefield Market Report for the period covering 22th of February to the 5th of March. 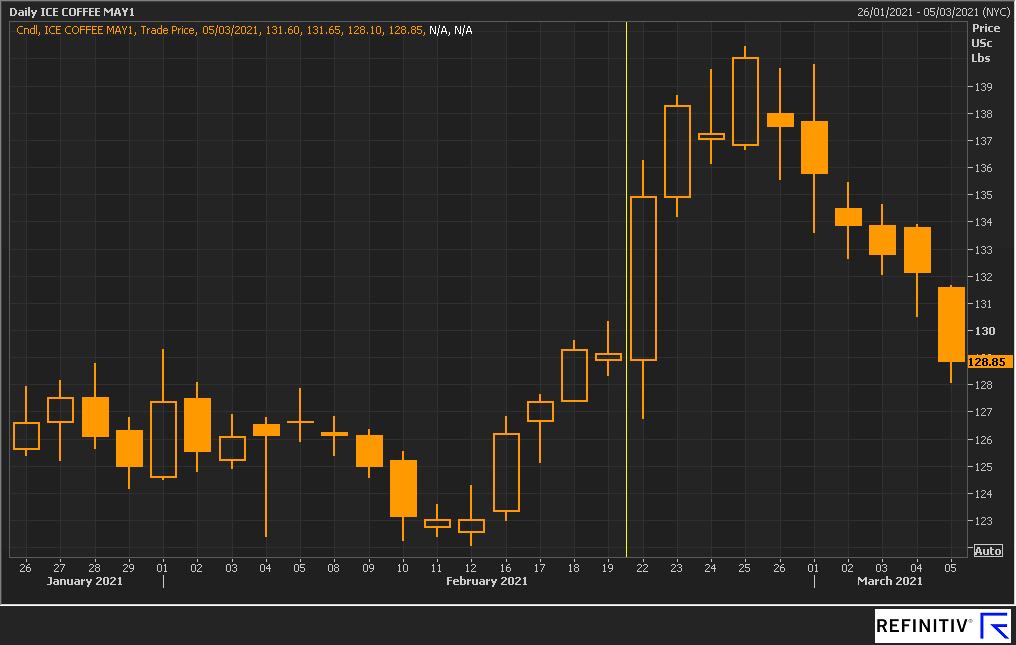 On Monday morning the bulls were shouting that we’d see the uptrend continue and boy did they get it right this time. Monday 22nd opened at 128.10 c/lb and its high of the day was 136.25 c/lb, before closing at 134.95 c/lb. It was one of the largest daily trading ranges of the year just missing the 10 c/lb mark at 9.45 c/lb. The uptrend was to continue, and New York hit a 2021 high of 140.45 c/lb on the 25th, but the market could not sustain this momentum and on the 26th it settled lower than it started. Although the Friday bucked the week’s trend there was still plenty of bullish sentiment sloshing around and this was fuelled by talk that coffee was finally joining other commodities in the start of a potential ‘commodity super cycle’. The next week was dominated by the bears with the market losing all the value it had accumulated over the week prior. Monday 1st hit a day high of 139.80 c/lb and would not threaten to touch the infamous 140 c/lb level again for the rest of the week. It closed out the week at 128.85, 8.85 c/lb lower than it opened.

The Bloomberg Commodity Index, up by 45% since last summer, is approaching 2 year highs. The speculators’ position reflects a bullish sentiment with COT reports across nearly all commodities showing a net long position for managed money.

In the COT with the cut-off date Tuesday 23rd February the speculators added to their net long position by 14,123 to 35,183 lots. Interestingly there was not much change on the next COT with an increase of only 859 lots.

Semi washed Brazils have effectively replaced Honduras as the main origin of certified Arabica stocks. This is a big change in comparison to this time last year when semi-washed Brazils were not even able to be sent to the board. Arabica certified stocks are expected to peak this month at around 1.8-1.9 million bags. 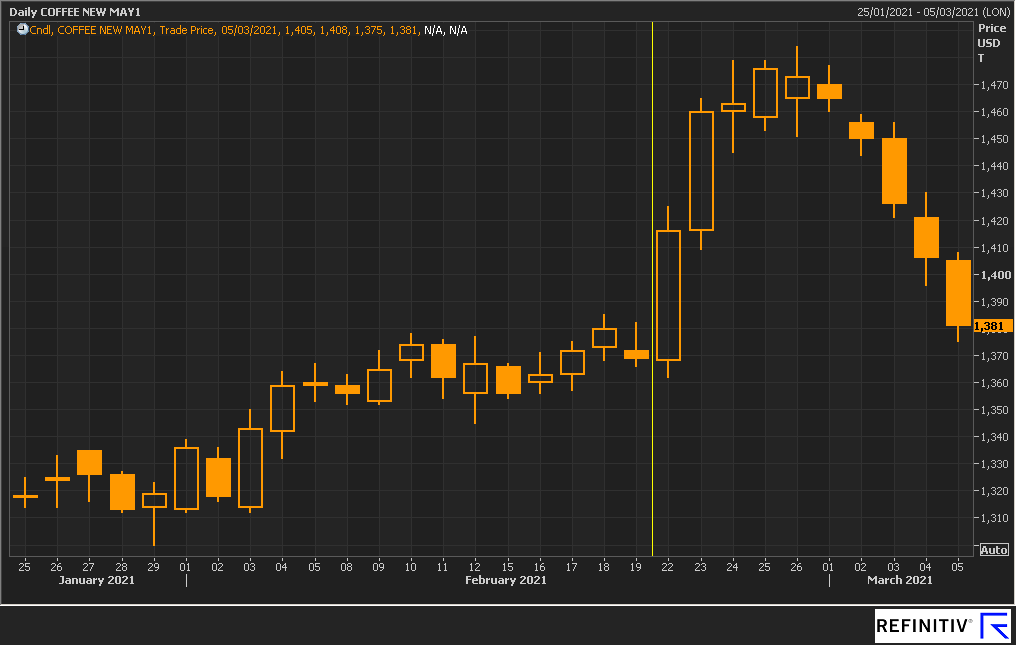 The Robusta market had been quite flat for 2021, mostly trading sideways with not too much to report on. Like Arabica, Monday 22nd was a big trading day and Robusta largely mirrored Arabica’s movements going up one week, and then down the next. It opened on the 22nd at 1,368 $/mt, hit a high of 1,465 on the 26th, and closed on Friday 5th at 1,381 $/mt.

Honduras is reported to be around 80% though its harvest. The 19/20 harvest was smaller than the 18/19 harvest and the 20/21 harvest looks to be like the 19/20 harvest. Although production could be similar, reports suggest quality could be better. Differentials have eased a touch after the New York rally, which is the first time for a while as previously prices were remaining firm, regardless of what the NYC was doing.

The Brazilian Real depreciated against the US Dollar: on Monday 22nd 1 USD bought 5.47 Reals and on Friday 5th March it bought you 5.69 Reals. The government remains under heavy criticism for its procurement and roll out of the vaccine.

Vietnam has been the origin most affected by the global freight container shortage. Freight rates have tripled in some cases and even if you do get a booking, it’s not unlikely that your booking will get rolled. Could this see demand for other Robusta producing origins in the short term or perhaps more demand from certified stocks? From origin, both Uganda and Brazil are shipping record amounts and are happily making up the shortfall while the logistics challenges in Asia persist. Favourable BRL levels in Brazil are encouraging this movement for the shifting of Conilons. 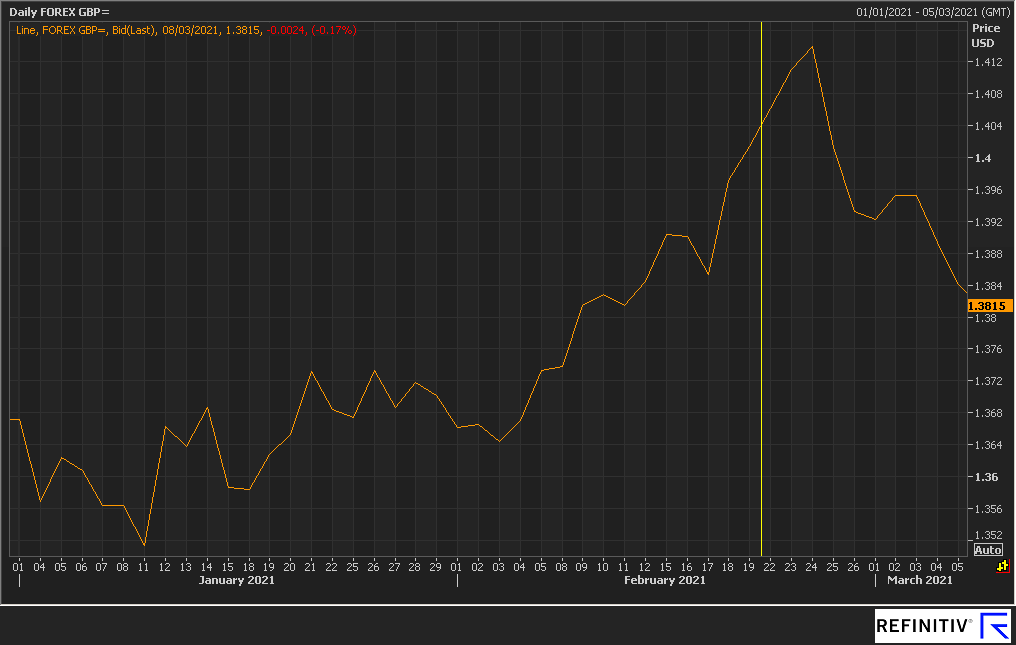 On Monday 22nd February, Pound Sterling was above 1.40 and seemingly on track to ascend to levels not seen spring 2018 where we briefly saw some trading at 1.43. We have to go back even further to June 2016 when the Brexit vote occurred to reach levels of 1.45. As you can see, this was not to be. On the 24th £ Sterling hit a high of 1.423 but it could not hold this level and lost value over the coming days. Market concerns over underlying UK fundamentals curbed GBP’s appreciation against the Dollar, in spite of plenty of optimism surrounding the vaccine roll out. There was a brief pull back in the lead up to the UK budget.

Some key takeaways were:

– The Furlough scheme was extended until end Sept. Employers will be asked to contribute 10% in July and 20% in August and September

£ Sterling lose value during the days post the budget. Although Sunak’s proposals were well received by the market, the UK is set to borrow a peacetime record of £355bn this year and borrowing will total £234bn in 2021-22. Concerns over how that will be funded dominated the narrative. GBP/USD finished the week at 1.381. 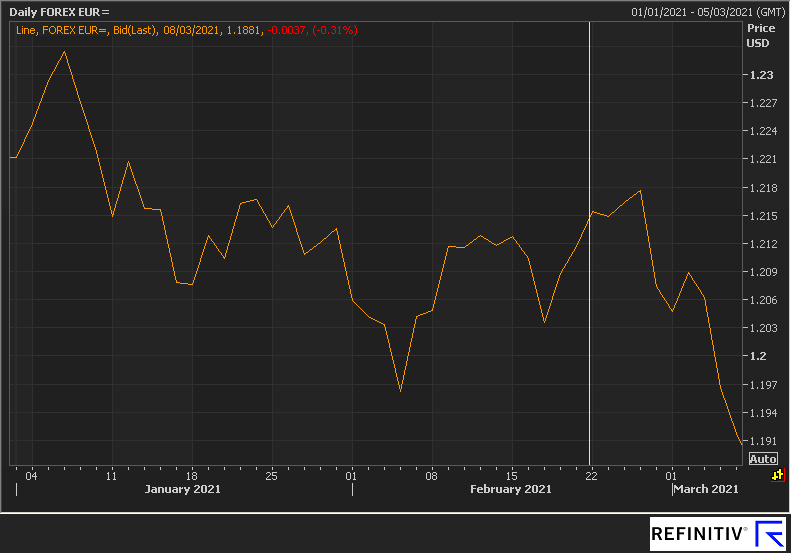 Fortunes for the Euro were not altogether too dissimilar to the Pound. It started the 2-week reporting period gaining value against the Greenback but could not continue this trend and then fell till the 1st of March. Over the next couple of days it clawed back some value before plummeting to a 2021 low of 1.19. The US Dollar Index strengthened to over 92, marking the end of a strong week for the US Dollar.

We hope you enjoyed the report and see you again in 2 weeks!

Downloadable PDF of this report