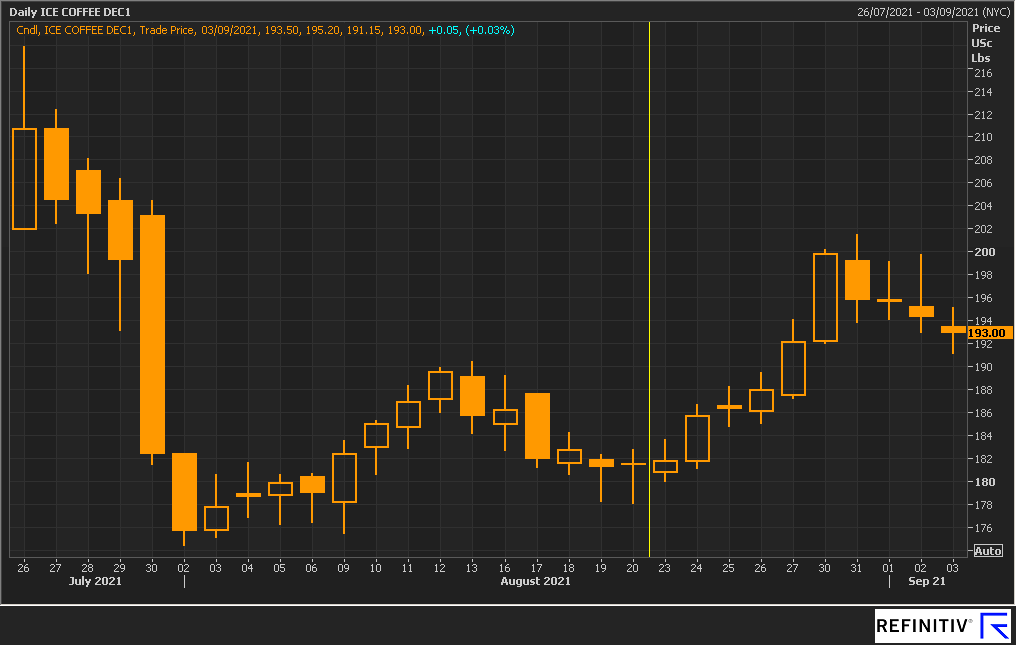 Coffee futures rallied strongly during the first week of the fortnight, opening the week at 180.85 c/lb, and going on to gain 11.35 c/lb, closing the week at 192.20 c/lb. This bullish sentiment was largely down to weather concerns, although this time it was the lack of rain across key Brazilian coffee areas as opposed to the return of Jack Frost that pushed prices skyward. The fear is that if rains do not materialise soon, flowering will not be induced in the quantity desired, and also that the trees will not recover as soils are still too dry and in need of moisture.

Monday 30th August was a Bank Holiday here in the UK, but it was a very active day for coffee futures. It opened at 192.20 c/lb and rose 7.7 c/lb to 199.90 c/lb. The key question for the week was: “Will we see 200 c/lb broken?” On Monday 30th it hit 202.20 c/lb before closing lower, and on Tuesday 31st we hit a high of 201.55 c/lb before closing at 195.90 c/lb. 200, like 100, is a significant psychological level, to the extent that mainstream media picked up on it and start reporting on coffee futures. The market tried to break through and close higher than this level but could not, and on Friday 3rd September it closed at 193 c/lb. Brazilian weather forecasts now draw the focus of much industry attention. Which climate model is your favourite?

In the CFTC’s COT report with the cut-off Tuesday 24th August, Non Commercials added marginally on both sides of the Gross Long and Gross Short with the Net Long increasing by 149 lots, to sit at 30,644 lots long overall.

In the CFTC’s COT report with the cut-off  Tuesday 31st August, we saw the Non Commercials build out their Net Long Position, adding 3,176 lots to make 33,820 lots long. Futures and Options Open Interest increased by 7,052 lots to total 351,925 lots long. 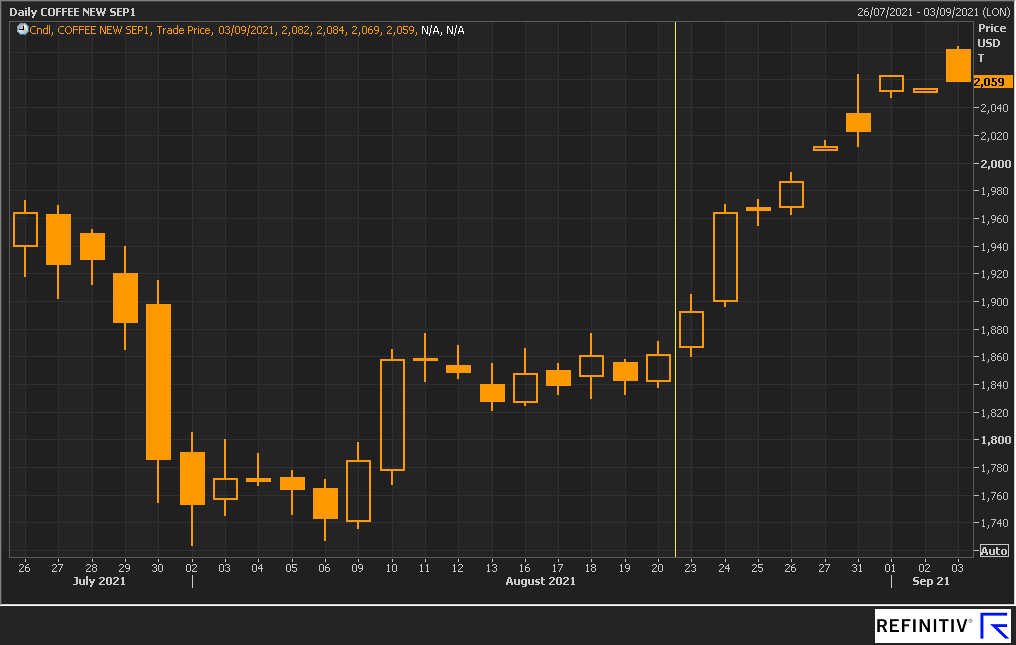 Robusta opened the fortnight at 1,870 $/mt and the low of 1,860 $/mt on Monday 23rd August would represent the low of the next two weeks. The paucity of Conilon on the international market put pressure on supply, providing support for Robusta in the future. It continued to increase till Friday 3rd where it hit a high of 2,084 $/mt before closing at 2,059 $/mt. This level is higher than when the Brazil frost spike occurred back in July. Covid-19 restrictions in Vietnam have tightened up, and there are worries that if this continues, the supply shortage could continue into early next year.

According to Aneel (the national Brazilian electric energy agency), Brazil is experiencing the worst drought in 91 years. The water shortage is affecting multiple crops, and there are surcharges in electricity as a result. It’s estimated that 95% of the 2021/22 harvest has been carried out. Once more data comes in, we’ll have a better idea of exactly how much coffee has been harvested. Coupled with the flowering due at the end of the month/early October, by the end of September we should have more certainty both on this crop and the next.

The scarcity of food-grade containers continues to dominate the headlines, and shipping out of Brazil has been the hardest it’s been in years. Continuous cargo rolls and increases in freight rates have caused delays that we do not associate with this origin. Shipping lines are reaping the rewards. Hapag-Lloyd reported last month that its half-year profits were in excess of those made over the whole of the past decade.

Guatemala is touted as one of the Arabica origins that could make up the shortfall of the next Brazil harvest, and as a result, new crop pricing remains firm. Vaccination rates remain low, and there are concerns about migrant pickers and their Covid threat. Guatemala sends migrant pickers to many of its neighbours, but if they cannot travel easily, we may see a significant shortage of pickers for the Central American harvest next year. Coupled with increasing fertiliser costs, many Guatemalan producers are hoping New York stays high so they can benefit from high coffee futures.

The restrictions in Vietnam tightened in an effort to curb the spread of the Delta Variant. The government is due to reassess the policy on the 9th September. There is a government suspension on export documents, and we have seen exorbitant freight rates for September and October shipments (provided you can get a booking). Weather continues to support the second round of fertiliser application. 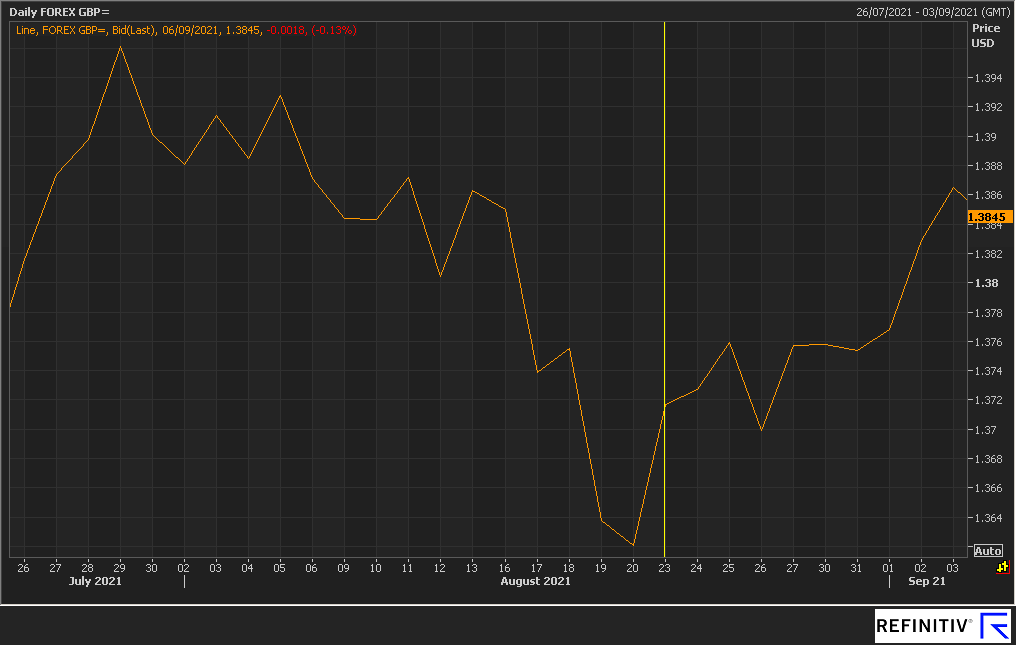 GBP/USD started the fortnight at 1.372. Over the weekend prior, the Pound clawed back some losses it had made the previous week and looked set to continue this into w/c 23rd August. It did continue in that direction but ticked downwards on the 25th to hit 1.37, the lowest level we would see over the fortnight. Car output in the UK fell to its lowest July levels since 1956 due to a global shortage of semi-conductor chips along with staff shortages. However, this negative data could not push us through the 1.37 support level, and the Pound quickly rebounded the following day. It proceeded to trade sideways till 1st September before it began its ascent to reach 1.386 on 3rd September. On that Friday, Jerome Powell, Chairman of the Federal Reserve, did not indicate when the Fed’s buying programme may begin to wrap up, which weighed down on the Dollar’s likelihood of strengthening. 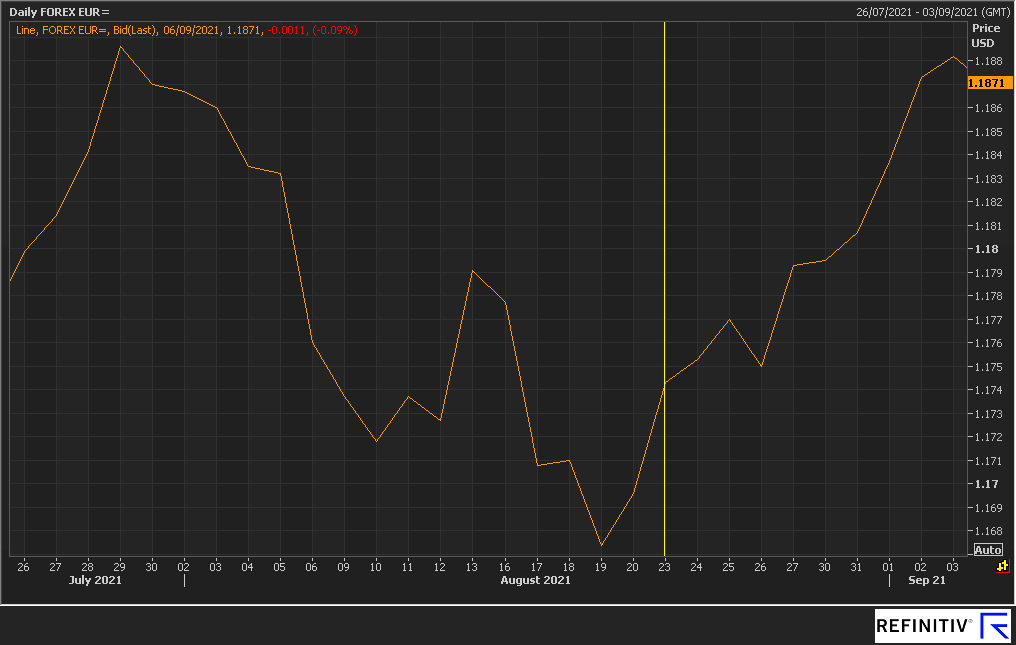 The US Dollar Index weakened from 92.99 to 92.11 over the fortnight, and just like the Pound we also saw the Euro strengthen against the Greenback. EUR/USD started the fortnight at 1.174 and strengthened over the next couple of days to 1.177. Like the Pound, it dipped on the 25th and hit the fortnightly low of 1.175. After this, the only way was up, and the Euro avoided the sideways trade we observed in the cable. The market was spurred on by good economic data and sentiment from key institutions. President of the Dutch central bank, Klaas Knot, said that he thinks all incoming news on the economic front has been a positive surprise – to such a degree that would allow the ECB to slow down its stimulus measures. How the bloc deals with the Delta variant this autumn and winter will play a key part.