Good day. Welcome to the fortnightly DR Wakefield Market Report for the period covering 19th of April to the 30th of April. 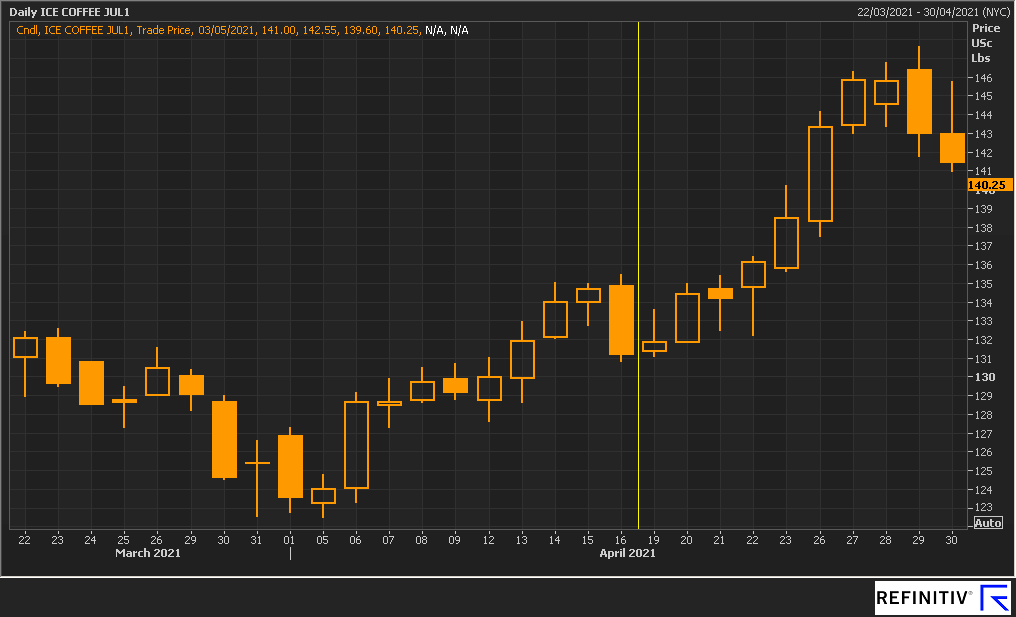 During our last reporting period the market closed higher than it started on 6 out of 9 attempts. This reporting period, it managed to achieve this 7 out of 10 attempts-yes, the bulls have been unleashed. Monday 19th April opened at 131.35 c/lb and although it hit a high of 133.60 c/lb, it only closed the day less than a cent higher than it started at 131.90 c/lb. Save Wednesday, the market shot up every day and on Friday 26th, the market closed the week at 138.50 c/lb, 1.50 c/lb under the 140 c/lb level which many market participants (ourselves included) pay close attention to due to it being the Fairtrade minimum market level.

The following Monday seized the bullish sentiment by the horns and we saw the largest daily trading range (5.9 c/lb) of the fortnight with the market finishing the day at 143.35 c/lb. It continued its upward trajectory and on the 29th we saw it hit its highest point of the fortnight, with the market going up to 147.65 c/lb. We did not see the market test the 150 c/lb level however, and on Friday 30th it came down to 140.95 c/lb before closing out the week at 141.45 c/lb.

The CFTC’s COT report with the cut-off Tuesday 20th of April saw the speculators add to their net long position by 7,790 lots, to total 18,289 net long.

The COT report with the cut-off Tuesday 27th of April saw this net long position increase further, this time by 17,314 lots to 35,603 lots net long.

The COT disaggregated combined futures and options reports for all major commodities are now showing a net long position for managed money. Talks of a ‘super cycle’ have returned to the narrative. For the first time in 10 years, Copper, the world’s most important industrial metal, traded above $10,000. Soyabeans, while not quite hitting a 10-year high, did manage an 8 year high recently. Will coffee be swept up in this movement? At the moment it looks to be the case. That said, many view a commodities super cycle as possible only if the US Dollar weakens much more than it is now. Super cycle? ‘Mini’ super cycle? Only time will tell.

Certified stocks continue to build, and they are now at levels last seen in March 2020, just before the start of the global pandemic. 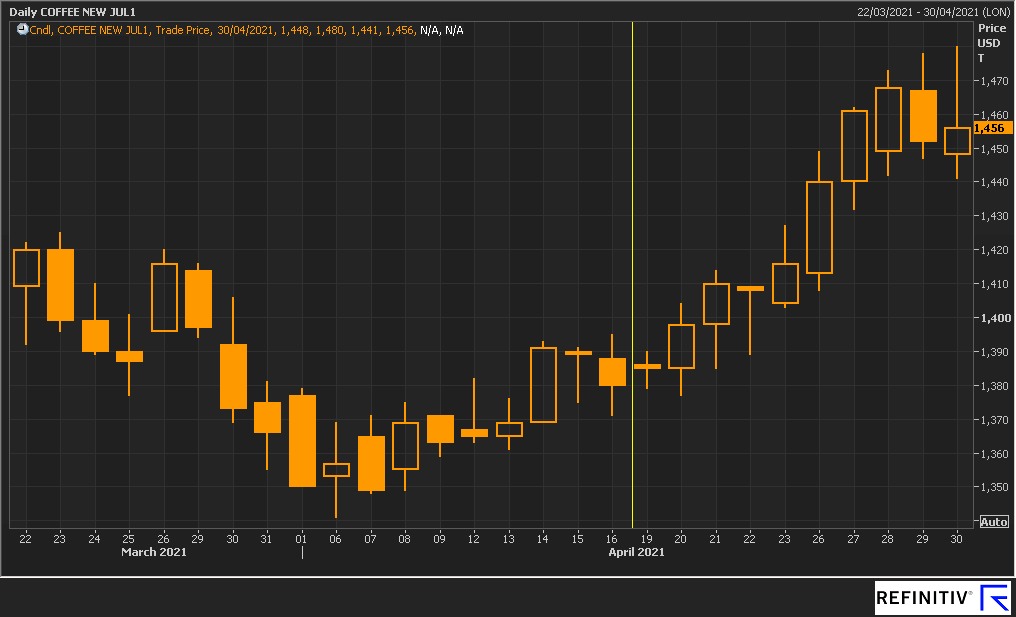 The Robusta market, much like its counterpart Arabica, saw some big gains in the second half of April. It also saw 7 days out of 10 where it closed the day higher than it started. On Monday 19th of April it opened at 1,386 $/mt and after touching the fortnight’s low of 1,377 $/mt on Tuesday 20th, it then didn’t look back. The high of the fortnight was the last day of the month where it touched 1,480 $/mt before closing the month out at 1,456 $/mt.

There was serious port disruption in Colombia towards the end of April due to strikes against the government’s tax reform plan. This caused some shipping lines to pause bookings out of the major ports till the backlog is cleared. The strikes have not just affected shipments though, internal logistics has been badly affected too, with delays on parchment deliveries to mills exacerbating the challenges of getting coffee from farm to port.

The volume of rainfall recorded in Brazil in April was below the historical average for the month. As we move into the dry season, there is less talk about weather and more talk about upcoming yields, how that affects crop predictions, and who is harvesting early. The big issue at the moment, however, is logistics. The scarcity of standard food grade containers persists and the reduction of shipping routes, lack of space on vessels, and postponements of vessels mean that it’s harder to ship coffee than it was in the opening months of the year.

Harvesting in the higher altitude areas in Honduras has now finished. After a very slow start to the year in terms of exports, they picked up in March and April. The impacts of the hurricanes weighed down on output numbers but due to logistics issues there is still a good amount of Honduras coffee as pergamino sat in warehouses across the country. SHG EP is, in many cases, trading above FT minimum export price and this has seen FT pricing increase as a consequence. Quality has been good to date and we look forward to cupping more of the higher altitude lots that are still trickling through. 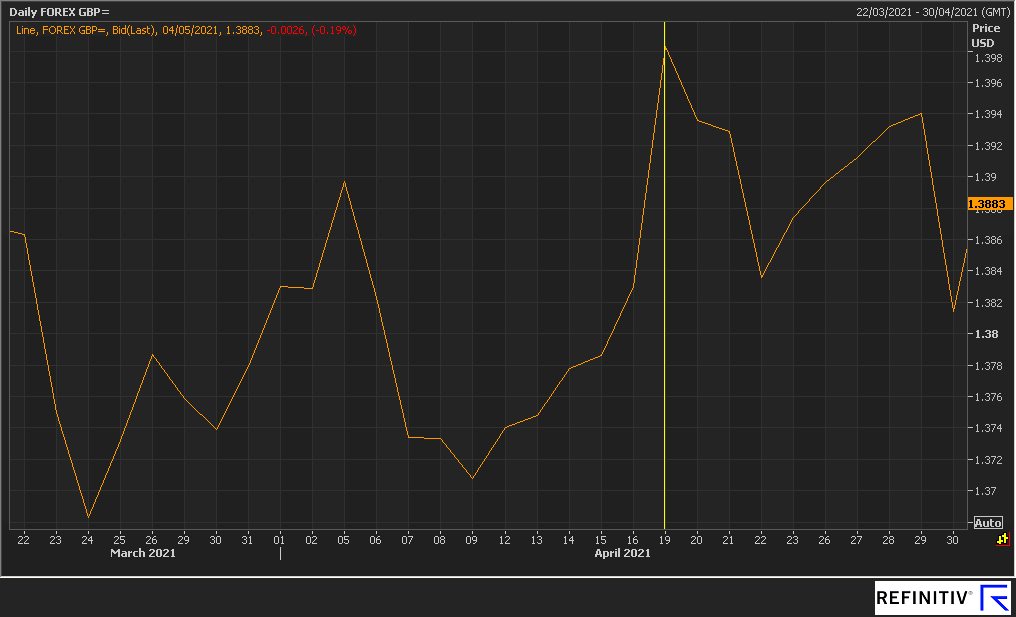 On Monday 19th of April 1 Pound Sterling bought you 1.398 USD. This was to be the strongest Sterling would be for the next 2 weeks. Rising covid cases in Japan and India saw global markets fall and this also pushed Sterling down as it slid to 1.392 on the 21st. It then dipped again to 1.383 on the 22nd. However, positive vaccine related news strengthened the Pound as it became apparent that nearly all over 50s had been vaccinated in England and nearly 10 million people were fully vaccinated in the UK. Pound Sterling rebounded and hit 1.394 on the 29th. It could not hold this level however, and went on to weaken against the Greenback, closing the month at 1.381. 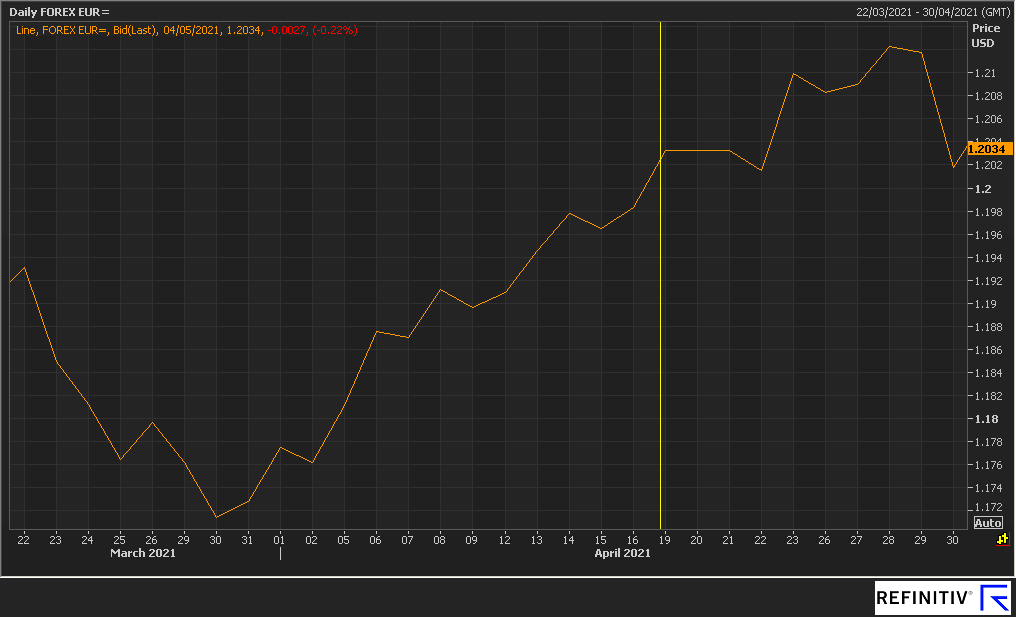 Although the Euro suffered a slide in value against the Dollar in the same way that the Pound did at the end of the month, broadly speaking it was a good fortnight for the Euro. As you can see from the graph, we observed a strong uptrend across the month of April. It started the month trading at 1.177 and finished it just over the 1.20 level. Let’s look at what happened in the last 2 weeks though.

On Monday 19th of April it opened at 1.203 and traded sideways for the opening days of the week. It tried to test the 1.21 level on the 23rd, but only managed to reach 1.209. It had no joy for the next couple of days but, due to increased optimism surrounding the Eurozone vaccine rollout, the Euro did hit 1.212 on the 28th.  Economic sentiment across the Eurozone was at its most positive for many months but this was not the case for all countries as there were some negative stories weighing down on the Euro. However, in the end it was the strength of the US Dollar that saw the Euro depreciate, with it closing the month at 1.201.

We hope you enjoyed the report and see you in 2 weeks!