Good day. Welcome to the fortnightly DR Wakefield Market Report for the period covering Monday 19th of May to Friday 28th of May. 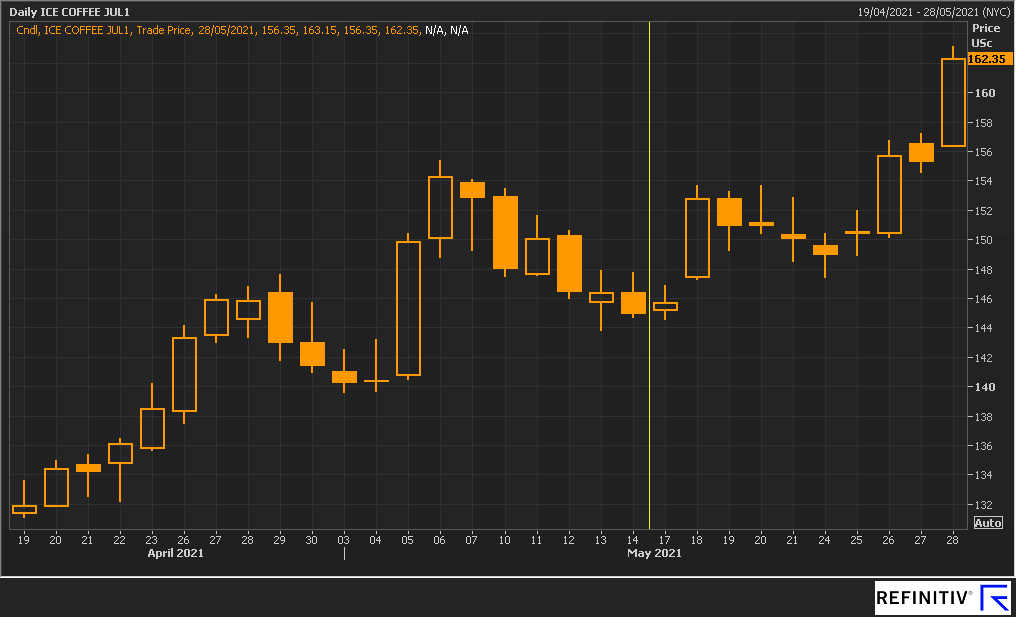 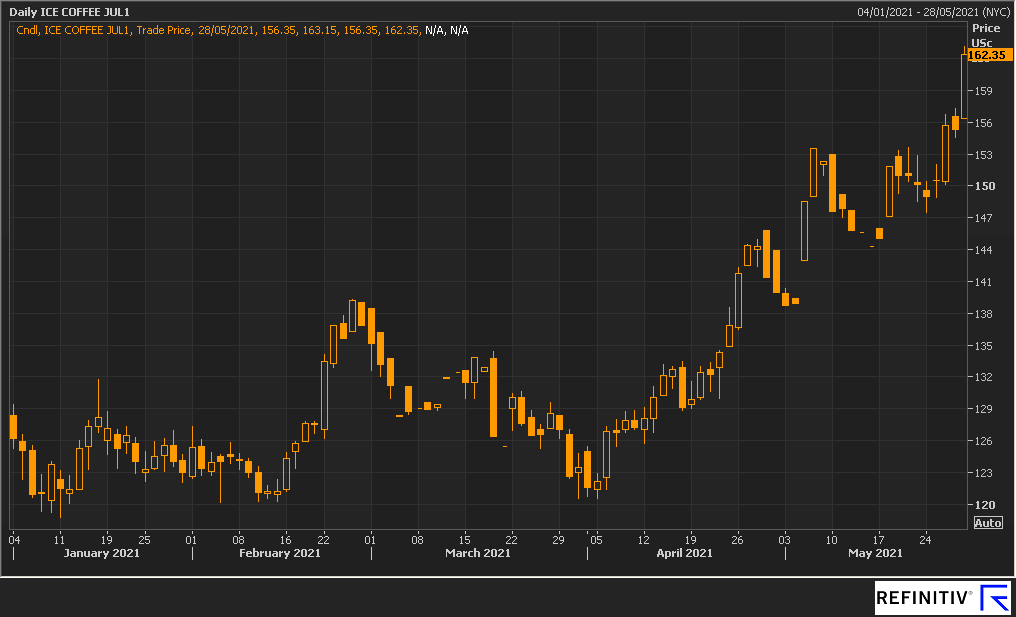 The CFTC’s COT report with the cut-off Tuesday 18th of May saw another milestone for the Commercial Shorts, who added 213 lots to set a new record of 212,106 lots overall. The Index Traders trimmed their record net long position and the non-commercials added another 683 lots to reach 35,346 lots long.

The CFTC’s COT report with the cut-off Tuesday 25th of May saw the non-commercials add to their net long position again by a small quantity (65 lots) to leave the overall Net Long at 35,411 lots.  The Commercial Longs used the falling price as an opportunity to add some cover and the Commercial Shorts increased their record short position adding 1,588 lots to 213,694 lots overall.

Total Arabica certified stocks continued to build and current stock levels (2.08 million bags) are greater than both the 5 and 10 year average, and equal to the average of the last 2 years. 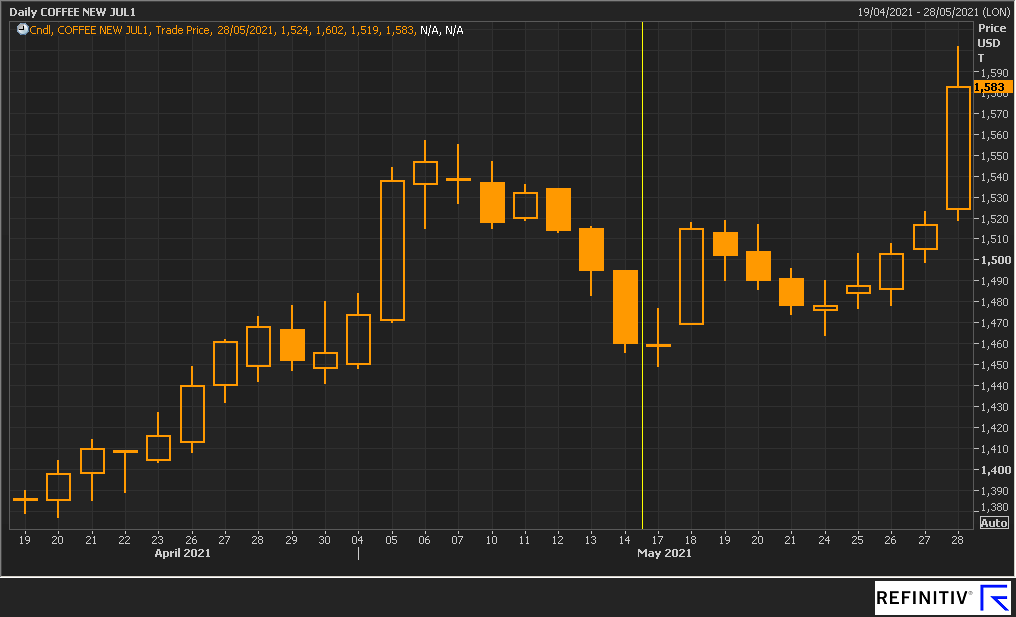 The Brazilian government issued a water emergency alert for the period of June to September in five Brazilian states: Minas Gerais, Goias, Mato Grosso do Sul, Sao Paulo and Parana. All are in the Parana river basin, where part of agricultural production and large hydroelectric plants are located. In the region, the situation is classified as ‘severe’ and the forecast is that there will be limited rainfall for said period. It’s the first time in 111 years (since records began) that a warning of this type has been issued. The concern is that this will affect Brazil’s ‘on year’ (2022/2023) in its biennial cycle and this could cause a supply shortage. It’s likely this water crisis will dominate the narrative for quite some time.

The BRL appreciated further, to 5.21 BRL per 1 USD.  Over 21% of the population has received their first dose and roll out continues to pick up pace.

National strikes across Colombia were observed for the entire month of May. The worst affected port has been Buenaventura, which still has limited access. Shipping lines are now taking bookings from there but there is a large backlog to be worked through first. Many FOB Buenaventura contracts were switched to FOB Cartagena and Santa Marta. This contingency plan at least allowed for some flow of coffee. Estimates suggest that the strike has meant that less than 50% of shipments went ahead.

Although there are some positives, the southern regions of Colombia still remain cut off from the rest of the country and this has meant that it’s been particularly difficult for the cooperatives and exporters based there to navigate the choppy waters of May. Delays in shipments are of course delaying payments, which is exacerbating the issue.

In an attempt to control the spread of Covid-19, the Indian government imposed lockdown in many parts of the country which included many coffee growing areas. The degree of restrictions varied as this was down to the local administrations take on the best course of action. This has hampered the flow of coffee. In Karnataka state current restrictions are in place till June 7th. There are already knock-on effects on shipping and if the lockdown is extended, this will only worsen.

Availability of Plantation B is scarce, as many shippers are over sold and supply is limited. This is down to two main factors. Firstly, it’s estimated that as much as 20% of the crop is still in the hands of producers, who want to make the most of the current rally. Secondly, not many mills are processing coffee as demand for Plantation A and higher grades is low, and it does not make sense to only mill for those grades. If this continues, the quality of the higher grades will deteriorate as the rainy season approaches. What will give first? 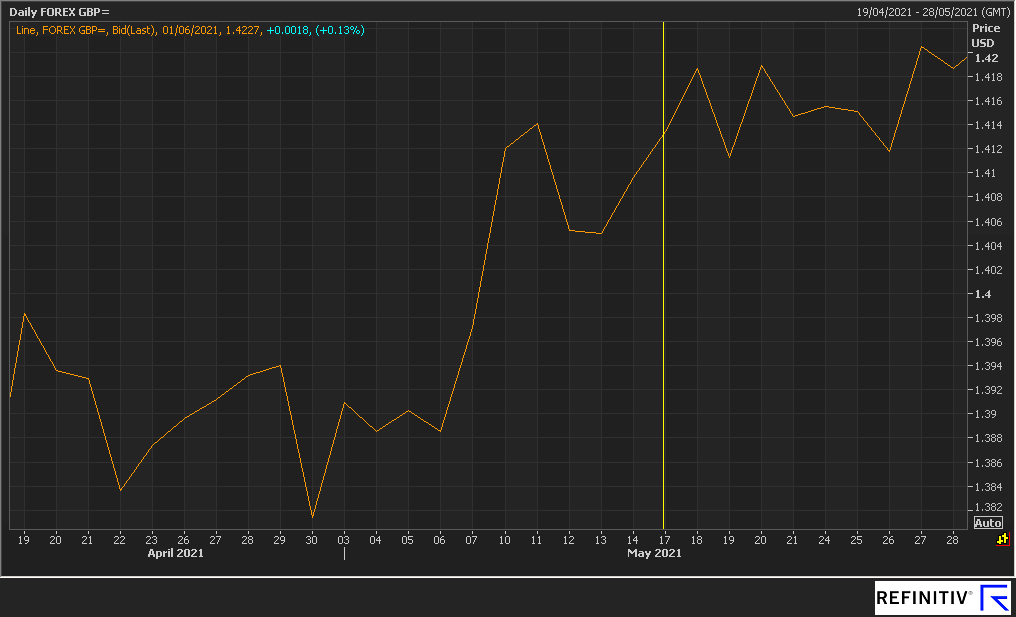 On Monday 17th of May 1 Pound Sterling bought you 1.413 USD. Restrictions were further eased in the UK and the Pound appreciated against the US Dollar to 1.418. Sterling is still sensitive to vaccine progress and the success of the easing of restrictions and it lost some value as news of the Indian variant spreading caused jitters in currency markets. Better than expected retail data managed to hold off a large slide in value however. What did cause the Pound to take another dip was the testimony of Dominic Cumming’s on the government’s handling of coronavirus and the competence, or lack thereof, of Boris Johnson and his government. It dipped to 1.412 but could not test the 1.41 level as comments from Bank of England Monetary Policy Committee (MPC) member Gertjan Vlieghe stated that UK interest rates could rise earlier than expected, which provided support to the Pound. It closed Friday 28th of May just shy of 1.42. 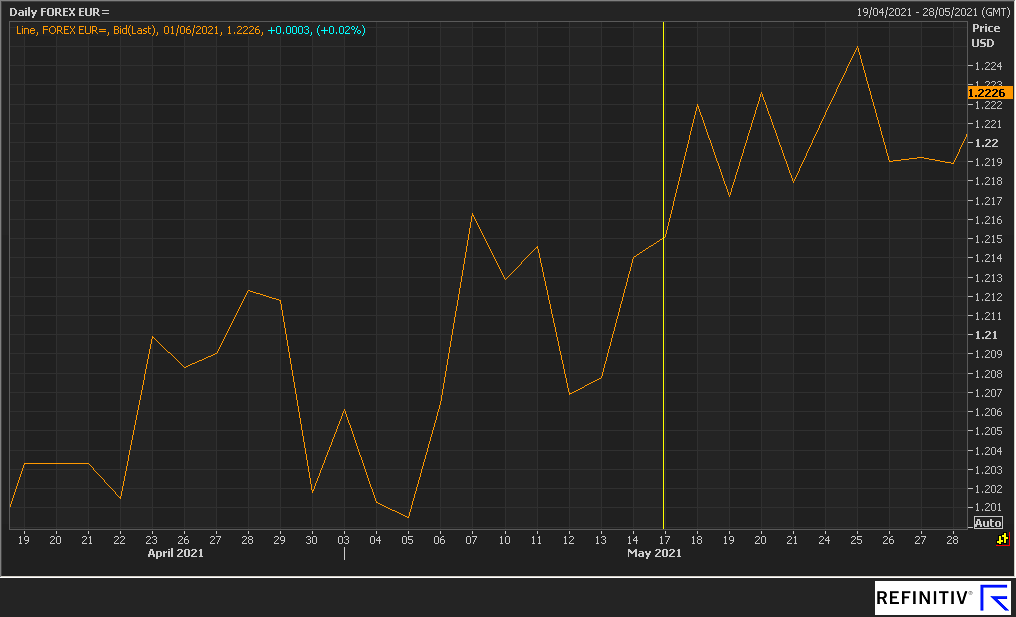 1 Euro bought you 1.215 USD on Monday 17th of May and the Euro immediately shot up to the first of the three peaks that it would hit over the course of the next fortnight. It pushed through the 1.22 level amid Dollar weakness, only to fall on the 18th before rising again on the 19th to 1.222. It then experienced a dip similar to the one it experienced after the first peak.

However, as the vaccine programme in Europe accelerated and more positive news regarding the recovery was released, the Euro appreciated from the 21st onwards to hit 1.226 on the 25th. A strengthening USD saw it tumble to 1.219 and although the Eurozone had falling Covid-19 cases, this did not benefit the currency as it traded sideways for the remainder of the week.

We hope you enjoyed the report and see you in a couple of weeks!