As the leaves turn brown and we head into autumn, many governments are bracing themselves for the challenges that the colder seasons will bring. Localised lockdowns were employed across the globe and the belief that ‘it will all be over by Christmas’, held by many during the balmy summer months, dissipated.

What is positive, is that our industry has rebounded and has put measures in place to control what it can. It’s been amazing listening to the success stories of businesses pivoting to adapt to the new environment we find ourselves in. From safe ways of serving takeaway coffee to new or improved online shops, people are finding ways to make things work.

September was an interesting month for sport. Although stadia are mostly still empty, we saw the return of some of our most cherished competitions.  The Premier League kicked off on the 12th of September, Roland Garros started up on the 22nd of the month and The Indian Premier League returned for its 13th season.

This month we head out to Kenya, Indonesia and Nicaragua to hear the latest news and views. 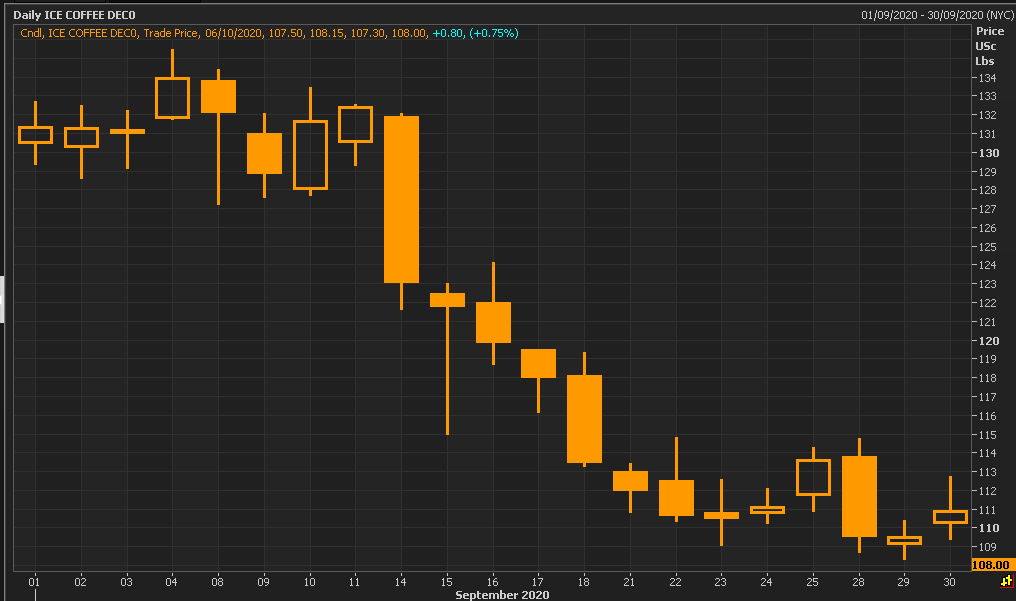 The market opened the month at 131.30 c/lb and attitude was split on whether we would see the rally that started in the 2nd half of August continue to rise, or whether we would see it test the 112 support level we nearly hit on the 11th August. After a few days of trading sideways, it hit the month high of 134.80 on the 4th of September. It continued to move sideways till Monday the 14th of September where we saw a large fall that was driven by a speculative sell off initiated by the funds. The COT released on the Friday previous (11th)  showed that the speculative net long position was at a 4 year high and much higher than expected. Weather predictions showing signs that Brazil was due to receive good rainfall which fuelled this bearish downtrend.

For the next week every trading day closed lower than the opening and on the 23rd we tested the 109 c/lb support level. The market closed the month just shy of 113 c/lb, representing nearly a 20 c/lb loss across September.

Last month we mentioned that a significant volume of Brazil semi washed was about to flood ICE exchange warehouses and affect certified stocks. We did see much grading occur but it’s still too early to tell what the outcome will be. Perhaps next month we will know more on that?

Compared to Arabica, the fundamental picture is tighter for Robusta; estimates for the 2020/21 crop in Vietnam from a Bloomberg survey point to a 28.7 million bag crop. With indications that consumption of Robusta is increasing as consumers look for cheaper coffee, the combination of reduced supply and increased demand could provide long-term support for Robusta pricing. However, we still saw the month close at 1,288 $/mt, 175 $/mt lower than when it opened-not as significant as that observed in Arabica, but still considerable. 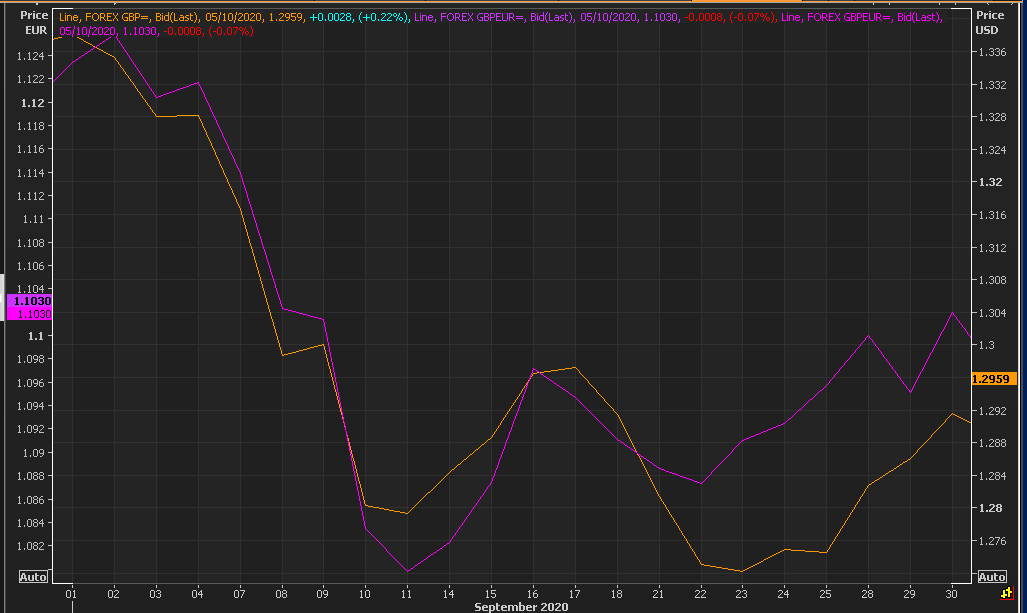 September started off at the lofty heights of 1.335. Coronavirus figures in the US exposed the Dollar as fragile against its key currency pairs and some opined we would not dip below 1.300 for the foreseeable future. This optimism was dashed after a strong downtrend for the first half of the month which saw £ Sterling dip below the 1.28 support level on the 11th of the month. It did pull back to 1.296 but could not break through the 1.300 resistance level we have oft talked about in the past. Before hitting the month low of 1.266 on the 23rd, GBP/USD closed the month at 1.291.

Unlike August, which saw the Pound gain momentum against the Euro and finish stronger than how it started, September was less rosy for £ Sterling. It started at 1.122 and broadly mirrored the GBP/USD drop we mentioned earlier. It did however drop further on the 11th and this was down to the infamous Internal Market Bill. According to the EU, the adoption of the bill would constitute a serious violation of the Withdrawal Agreement and International Law.

The proposed changes to the Brexit Withdrawal Agreement signed last year that the Bill puts forward triggered a loss in confidence in £ Sterling that saw it move to a 6 week low. The 1.080 level was the month low and we closed the month at 1.101. 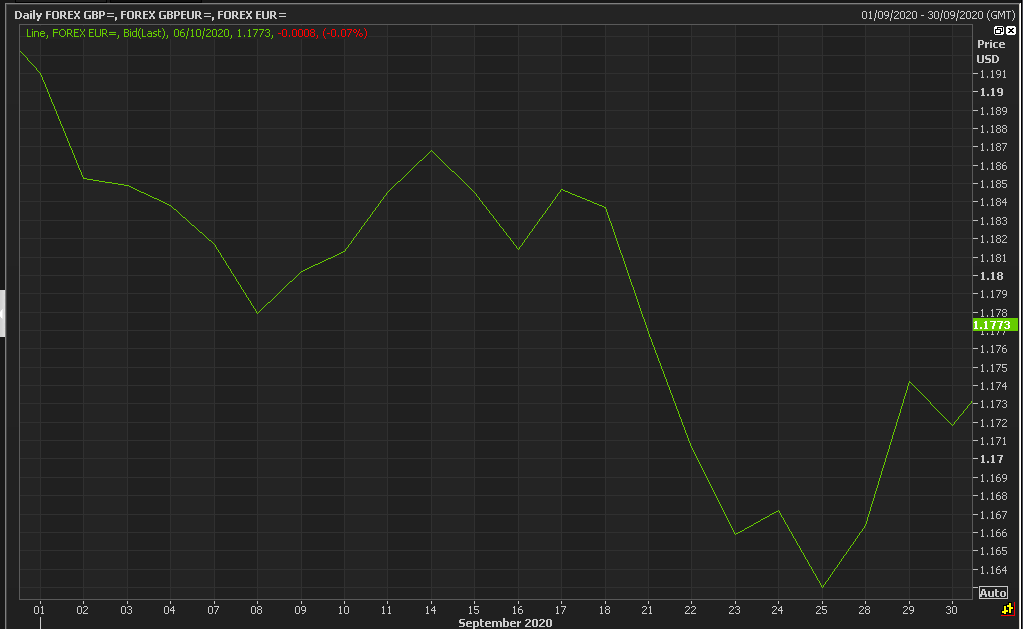 Reports at the beginning of the month suggested that the ECB was concerned over the Euro’s strength against the Dollar. Fortunately for them, September saw the Euro lose value against the Dollar. It started the month at 1.191 and trended downwards for the first week. However, after the meeting of the ECB on the 10th where the ECB President, Christine Lagarde, downplayed recent concerns about the Euro being overvalued, it regained some value to 1.187. After that high on the 14th it continued to trend downwards to the month low of 1.163 on the 25th, before closing the month at 1.173.

The Brazilian government’s agricultural statistics agency, Conab, revealed it thinks the 20/21 harvest will not surpass the record production year of 18/19, but it will be close. Numbers from the fields point to an average yield of around 33 bags per hectare, similar to the levels we saw for the 18/19 crop. It’s worth nothing that the Conab estimate is below the industry average, which still points to a record crop by a comfortable margin. With a 1.4% annual increase of hectares dedicated to coffee production, Brazil’s share of global production looks set to continue to grow.

Production numbers coming out of Colombia are higher than anticipated. From October through to August it produced 13.1 million bags. Exports, however, are down on last year. Could this mean an oversupply going into the 20/21 coffee year? Prices would not indicate so. Excelso EP hovered around the +47 mark for most of the month.

Vietnamese export pricing fell during the 2nd half of the month, while Indonesian Robusta differentials remained firm. Demand was flat, as most people waited for news on the next crop. Figures show that exports from Vietnam decreased for the first 9 months of 2020 compared to the same period in 2019. It looks like the final figure for the year as a whole was just shy of 29 million bags. New crop picking will begin towards the end of October while new crop shipments won’t begin in earnest till the middle of November.

During Kenya’s lockdown which commenced in March 2020, the Ministry of Health directed the Nairobi Coffee Exchange to conduct weekly coffee auctions remotely. This was done by using google sheets which was not ideal, but served its purpose and allowed participants to bid on coffee remotely. However, a few months later the auction trading system was modified to allow remote bidding which improved the process. Although the fly crop was projected at twelve to fifteen thousand metric tonnes this year, it may only reach eight to ten thousand metric tonnes. This lack of supply caused a short covering rally as many dealers sold short in anticipation of a healthy sized fly crop. Differentials for Kenyan coffee remained reasonably firm over the September coffee auctions, but they did track downwards a touch with the fall in the NYC at the end of the month.

The main topic discussed in Nairobi is the re-emergence of the ‘New KPCU’. This entity, newly revived by the Government, has been giving advances to farmers and milling fly crop coffees but for an unknown reason has not brought these coffees to auction yet. It’s predicted the new KPCU will bring coffee to the auction in October. The delay has helped keep pricing firm. Statistics for the crop year October 2020 to September 2021 point to a main crop of 33,000 metric tonnes and a 7,000 metric tonne fly crop: 40,000 metric tonne in total. We’ve mentioned before that the city of Nairobi is enlarging and often at the expense of coffee lands. The good news for supply is that new plantings continue apace in Western Kenya and the Rift Valley. Coffee production remains a hot political issue and the rebirth of the KPCU is evidence that the government is attempting to make reforms. The jury is out as to how effective these reforms will be.

Sumatra new crop is right around the corner and the industry is positive about both quality and quantity. However, there is still significant volume of current crop yet to be sold. Much of the coffee harvested in April and May (peak lockdown months in Europe and US) remains without a buyer. Demand for Indonesian coffee, both internationally and domestically, has dropped due to Covid-19. The Indonesian economy has slowed down and, in the absence of a government backed scheme to save jobs like the furlough scheme in the UK, unemployment has risen dramatically. This has put downward pressure on pricing and prices have dropped faster than many can remember. All along the supply chain market players are holding a large stock position in their warehouses driven by the hope that prices will rebound. The looming new crop is making many of these people uneasy. Who will move first? Up to 25% of the current crop is still yet to find a home, and this remains the big talking point in the trade.

Glyphosate continues to be a big issue for organic farmers, especially in Aceh and Northern Sumatra. Last year nearly all testing occurred outside Indonesia; now there are more local laboratories able to test to the organic MOQ of 0,01 mg/kg. This has meant cooperatives can be proactive and identify which producer groups might have issues with regard to the permitted organic levels outlined by the European Union. Many people point the finger at local ‘organic’ products that actually contain a number of inorganic pesticides, Glyphosate being one among many.

In 2019 Nicaragua received 2,782 million USD for exports and coffee represented nearly 17% of that figure. This year’s exports have fared better than they did for the same period in 2019 and coffee is due to have an even larger share. Exports however, do not reflect the wider economy. Other key industries like tourism and construction have been badly hit by Coronavirus and mass unemployment has occurred in these sectors. Just how hard the pandemic hit the country is anyone’s guess. Official statistics are regarded as questionable at best, and many suspect the reality is far worse than publicised.

The good news is that the vast majority of the current crop has been sold and exported. Currently the only coffee still in warehouses is of lower quality coffee that remains in the hands of multinationals. All eyes are on new crop and the first shipments later this year. It’s predicted that between 2.8 and 3 million quintales (1 quintal = 46kg) will be produced in the 2020/21 crop. Winter was excellent and many farmers are positive about upcoming quality and yields. However, the new sanitary procedures in place to fight coronavirus have driven up production costs. Credit, already in thin supply, is now harder to get access to also. Higher costs of production coupled with a low NYC has meant that banks view coffee as a riskier asset class, and interest rates have priced this in. Whereas in the past producers might get between 9 and 12%, they now face rates of 14 to 17%. This is in stark contrast to European interest rates which remain at record lows.