September saw the Rugby Union World cup kick off in Japan, where the hosts beat Russia 30-10. Liverpool continued to dominate the Premier League and Boris Johnson maintained his 100% loss record as UK Prime Minister. As the Brexit departure date of 31st October loomed closer, there were numerous changes, quarrels and departures at Westminster: business as usual in this post Brexit climate.

This month we delve deeper into: Indonesia, Peru and Rwanda. Which one’s crop came all at once and much less than expected? Find out later on in this report… 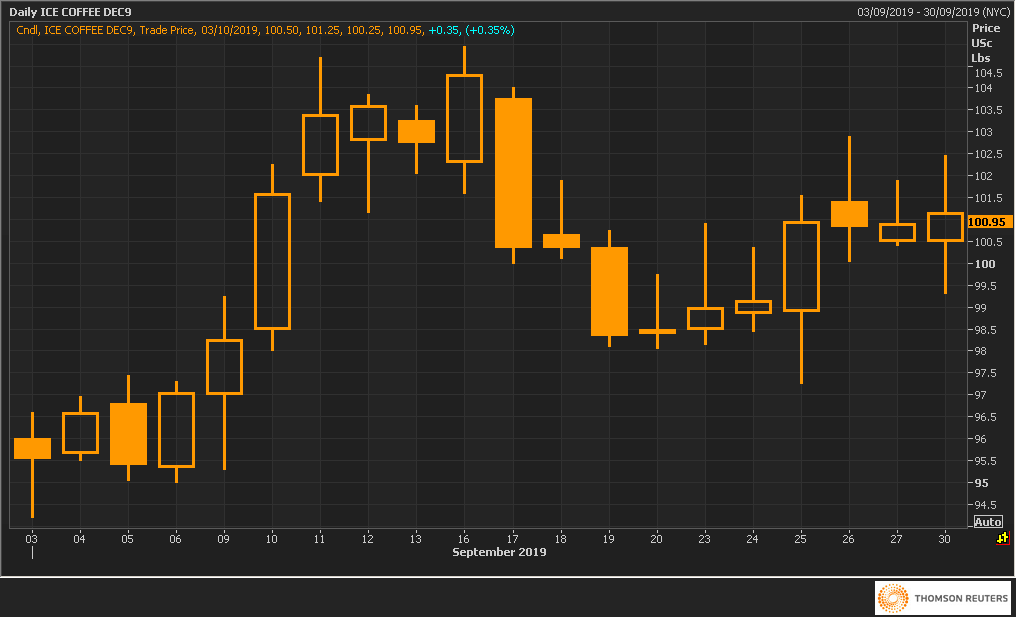 The December terminal started September trading at 96 c/lb and hit the month’s low of 95.55 c/lb. It traded sideways for the first few days before tracking upwards, reaching the month high of 104.95 c/lb and settling on the 16th September at 104.30 c/lb.  The market could not sustain that level and retracted back down over the following days. There were fears on the 25th that the 97 c/lb support level could break but in the end the day closed at 100.95 c/lb. September closed at 101.15 c/lb, representing an increase over the month of just over 5 c/lb.

The first COT of the month saw an open interest of 270,058 lots and the net non-commercial position was minus 52,009 lots. The specs’ position was trimmed to minus 50,302 the following week, which was no surprise given the short covering that went on the days prior to the Tuesday cut off (10th Sep). This short covering continued the following week and the non-commercial position was reduced once again to minus 42,056, with open interest dropping to 256,899. The final COT of the month reflected more activity with open interest increasing to 264,549 and the funds reversed their recent move and increased their net position to minus 42,848. 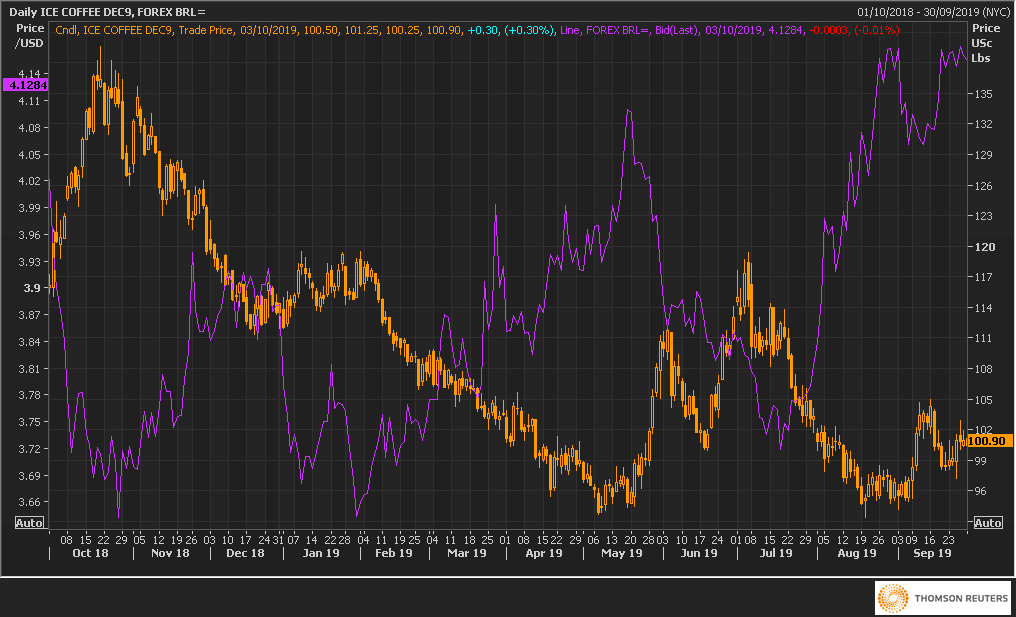 There has been much chit chat on the correlation of the Brazilian Real US Dollar currency pair (purple line) and the New York Coffee market (orange line). How does this look? If you look at the graph above, you can observe a strong inverse correlation between the two variables over the last 12 months. When the BRL was at its weakest against the US Dollar in October 2018, that was when the market was at its 12-month high. Equally, during August of this year, you can clearly see that as the BRL weakened, the coffee market fell, and when the BRL strengthened for 2 weeks at the beginning of September the market tracked back up. An indicator well worth looking out for in the last quarter of 2019.

Statistics released from the ICO show that Robusta production in the 2018/19 crop year increased by 6.7% to 66.04 million bags. The bumper Conilon crop of 2018/19 played a big part in this and continues to apply downward pressure on the Robusta market.

The cable opened the month at 1.211 and swiftly broke the 1.21 support level, nudging down to 1.207 before rebounding to a six-week high of 1.235 on the 5th of the month. This was driven by the House of Commons who blocked Boris Johnson’s bid to take the UK out of the EU on October 31st with or without a divorce settlement. It traded in a fairly narrow range till tracking upwards on optimism surrounding Brexit, hitting 1.25 on the 13th of the month, the highest it had been since July.

The Pound weakened on the day Parliament returned (24th), despite an initial boost from the Supreme Court’s judgement. On the 25th of the month, UK consumer sentiment dropped to a 6 year low due to concerns over the increased uncertainty on how Brexit will pan out and how that will affect peoples’ finances. This sparked another fall, and GBP/USD finished the month trading at 1.2280.

As you can see from the graph, GBP/EUR largely mirrored the Cable’s movements. It opened the month at 1.103 and closed 1.126. 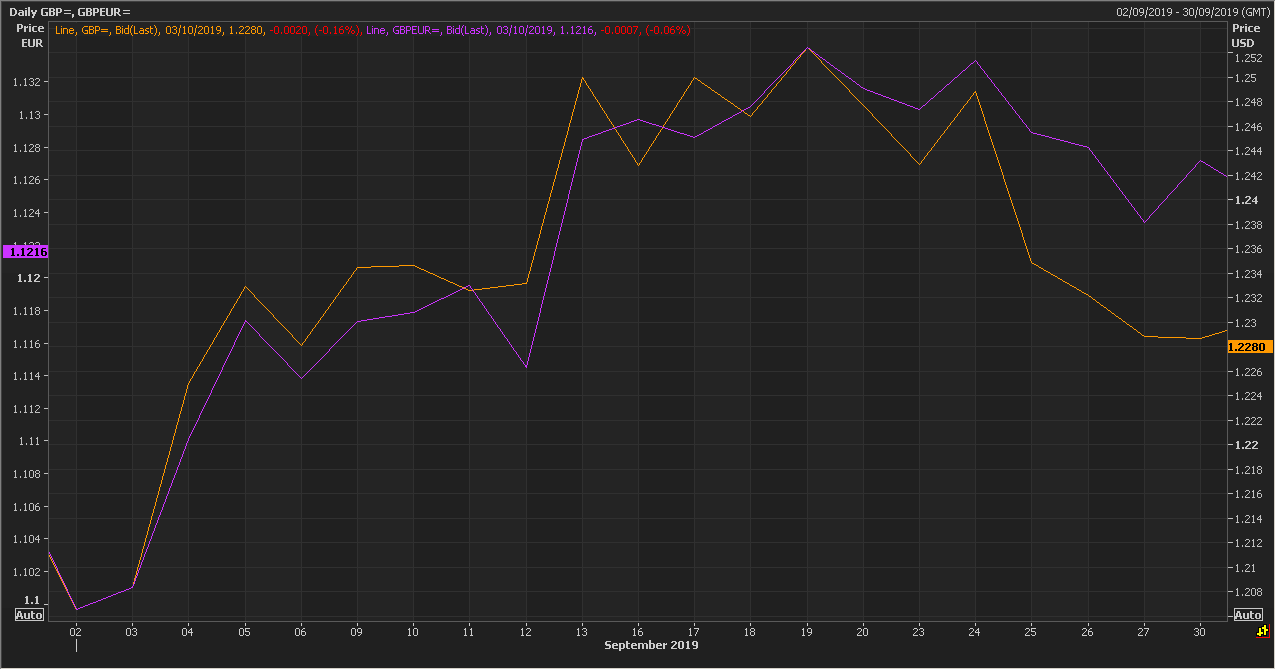 In the final week of September, Brazil was on track to ship 3.4m bags: 0.2m up on August and 0.27m up on the previous September. This would represent a record for this time of the crop year. Rain arrived at the right time and a healthy flowering is on track for October. The impending ‘mega-crop’ (2020/2021) looms on the horizon and maintained pressure on the market.

The internal market in Colombia stayed firm and differentials did not move much, even with the Colombian Peso devaluing against the US Dollar from 3200 in August to over 3400 in September.

Little activity in Vietnam with not much coffee being sold as buyers hold out until the arrival of new crop. The harvest is expected to start at the end of October and the hot and dry weather has been favourable for cherry ripening.

This year, almost all producing areas in Indonesia have experienced long droughts and sporadic short and heavy rains (more akin to storms). As a result, it’s predicted that total coffee production will dip by nearly 30% across the archipelago. Purchases are also stagnant/declining. With so much uncertainty regarding the production figures, the local market is apprehensive and hesitant to go long or short, given what happened 18 months ago where many exporters got caught short. Price ideas between farmers, exporters and roasters remain far apart and while that continues, business is slow. Local market prices are coming down and farmers are not happy with the prices but need to sell to get cash. There is still a good amount of coffee in warehouses and the price volatility is hampering a stable coffee price for all members of the supply chain. Calls for stability and a more sustainable way of trading in Indonesia remain unanswered, but a few cooperatives such as Ketiara Cooperative in Aceh are rallying people to change that.

Among Sumatra coffees, Aceh Gayo is the most well renowned for its quality and over the last decade it has become more and more sought after. As a result, Aceh Gayo coffee prices have skyrocketed and while this has been great for farmers there, unfortunately as a result many middlemen are trying to offer all Sumatra coffee as ‘Aceh Gayo’, this has become more of an issue since prices have risen, as everyone is trying to benefit from these good prices.This has been compounded by the decrease of almost 20% in production in Aceh. The key message here is that if you’re buying Aceh Gayo, make sure you are well informed on the supply chain so that it really is Aceh Gayo, not just any coffee from Sumatra.

In a bid to fight corruption and clean up the legal system, Peruvian President Martín Vizcarra dissolved Congress. The country is still haunted by the ongoing investigations into the bribery scandal involving Brazilian conglomerate Odebrecht. Many opinion polls across Peru show support for the President in his bid to oust corrupt officials, but the dissolution of congress will create more uncertainty going forward and it seems that is set to continue till the next parliamentary elections on the 26th of January 2020.

The first cupping festival dedicated to coffee in Amazonas happened from the 5th to the 9th of September. A range of people attended; from international buyers, to farmers and general coffee enthusiasts. Demand from this region continues to grow as word gets out on the exotic cup profiles you can find in the regions surrounding Rodriguez de Mendoza (RDM). The harvest has nearly wound up in the lower altitude areas and is nearly 70% complete in the higher altitude areas. Many exporters are short and the local price has remained high in the past 2 months. Differentials remain firm as a result. The majority of the harvest came in a 7-week window in the summer and has been less than forecasted. The harvest has all but finished in the centre of the country and Cajamarca is nearing the end of its harvest, with around 10% left to pick. Towards the end of the month it was challenging to process coffee due to the variability of the weather with regular on and off showers. Quality has been good however, with some excellent micro lots trickling through at the beginning of September. Watch out for some tasty arrivals soon!

The President, Paul Kagame, who has ruled for 19 years, has identified the coffee sector as a strategic industry for increasing prosperity and raising revenue. Ambitious targets have been put in place for this crop and it’s too early to tell if the targets will be hit.

This year the crop arrived much earlier than expected, which you will have noticed by the arrival of our first container from Kinini washing station, which usually arrives in October but this year arrived in August! The climate was more variable than usual, especially in the Northern province. However, many farmers point out that over the last 3 years every year has been different, so perhaps this is the new normal? Kinini washing station have teamed up with Weathersafe technology to monitor farms by satellite so they know when the best time to apply fertiliser is. It’s been very successful so far as average yields are increasing and the quality of cherry received has improved. This is also the first year Kinini has processed naturals, it has been an excellent experiment that has helped add more value to their coffee. Get in touch with a trader for samples!