Welcome to the September market report. Autumn finally arrived in the UK, with the ubiquitous Plane trees in London starting to turn golden brown as the colder temperatures set in. Social welfare insurance for coffee pickers? Yes, it’s happening. Find out where in our origin focus. In this report, we head to Costa Rica, Ethiopia and Nicaragua.

Last month we discussed sugar, and it continued to beat records, recording another net short position for non-commercial speculators. Talking of records, Brazilian shipments of coffee (Arabica and Robusta) was the fourth largest in history. Brazilian warehouses are reported to be still full of beans, so we may see more and more records from Brazil, just as we have consistently seen records regarding the net short position for speculators in Arabica futures. As the presidential election looms in Brazil, exporters are starting to offer less coffee, with producers preferring to hold coffee until it is clear who the next President will be and what impact he or she will have on BRL and as a consequence, the NYC.

The Market (Nov-18 terminal) closed the first day of the month at 1546 $/mt and 5 days later had lost 71 $/mt, closing at 1475 $/mt, which ended up the lowest close of September. It rebounded the following day to 1501 $/mt, and broadly traded in a 40 $/mt range for the rest of the month, despite threatening to break through the month low on the 10th September.

Brazilian Arabica has dominated the narrative regarding the NYC, and Brazilian Conilon has done the same for LIFFE. Abundant rain and successful irrigation has helped Conilon production bounce back after the devastating drought in 2016. Trees are already flowering for the next crop and thus far the data suggests the next crop will be strong too, which will provide fundamental pressure pointing to the downside. Export data coming out of Lampung Southern Sumatra, the port which exports the most Robusta in Indonesia, shows a sizeable decrease compared to this time last year. Is the crop lower than predicted, or are farmers waiting for LIFFE to increase before they hand in their coffee? Or both?

The market was jittery after Donald Trump threatened to pull out of the World Trade Organization (WTO). With the trade war with China progressing, fears that this could turn global dominated the currency discourse.

Reports released at the beginning of the month stated that the UK economy expanded on average by 0.6% from May to July 2018. This did little to help strengthen Pound Sterling and GBP/EUR stayed firm where it started the month at 1.11. However, after Michel Barnier indicated that a Brexit deal within 6 to 8 weeks was realistic the Pound strengthened to 1.12, before sliding back to 1.11 after Tory sceptics and members of the opposition indicated the Chequers Plan is unworkable.

Brexit did not just affect GBP/EUR but also the Cable. After Theresa May’s statement at Downing Street on Friday 21st September, she mentioned the UK and EU are ‘a long way apart’ on certain issues and this saw Pound Sterling suffer its largest daily drop in value against the Dollar in 2018. GBP/USD started the month at 1.29, rose to 1.325 and closed the month around 1.30.

Jair Bolsonaro, the current front runner in the Brazilian election in November, was stabbed at a political rally on the 7th September. Petrobas increased the price of Diesel by 13% in its first price adjustment since June, which saw a 5% minimum freight price increase as a result, depending on the cargo and distance. As normal for this time of year, there has been congestion at port, with many struggling to get booking slots for their coffee cargo.

With current market conditions, Excelso pricing is well below cost of production in Colombia. Weather has been favourable for the 2018/19 crop, despite one of the wettest Augusts observed in the last 20 years. Thankfully September was much sunnier, which helped the crop develop in the South. Crop estimates range from 14 to 15 million bags.

The other ‘big origin’ Vietnam, is also predicted to have a big crop. The majority of reports suggest that more than 30 million bags of Robusta will be produced in 2018/19. Weather forecasts for October and November are positive-substantiating claims there will significant volume produced in Vietnam this crop. Exporters and cooperatives indicate the harvest will start in the middle of October.

As highlighted in our April market report, this year has been choppy for the people of Nicaragua. Back in April, the Catholic Church was attempting to bring peace and stability to the political situation, but unfortunately this did not yield any improvements. The turmoil has not just affected the coffee industry, but commerce in general: tourism has suffered. 100,000 people in the tourism sector have reportedly lost their jobs because of the sharp drop in visitors to the country. Foreign direct investment (FDI) has been put on ice for the foreseeable future as people stand back and wait for the dust to settle. Security remains an issue and this increases costs for everyone. Although the rural areas where coffee is produced remain safe, the more dangerous climate means that costs of hiring security staff when exporters and cooperatives move their coffee within the country and especially to port, have gone up, directly hurting their bottom line. Rainfall has been nearly as problematic as politics this year, its irregularity hindered the harvest and resulted in not all of the coffee being able to be picked.

Like its neighbours in Central America, Roya has plagued Nicaragua in recent years and there has been a great deal of planting of rust resistant cultivars as a consequence. The purchase of these new cultivars (often more expensive than traditional ones), coupled with renovation at farm level, has not come without its cost. With the low NYC, this is putting further burdens on small producers. Reports that some of these rust resistant cultivars are starting to lose their resistance is most concerning.

Abiy Ahmed, Prime Minister of Ethiopia, has made significant inroads into brokering a peaceful future with its neighbour to the north, Eritrea. However, peace is not a word associated with the internal politics at the moment.

Federal police said at least 25 people were killed in Burayu, 12 miles northwest of the capital Addis Ababa in an attack targeting ethnic groups. During a demonstration to denounce the killings in Addis Ababa, more lives were lost as police killed five people. As ever, political unrest affects the flow of coffee. Many cooperatives and exporters struggled to get drivers to make the drive from Addis to Djibuouti, for fears of safety on the roads in Addis and the surrounding areas. Towards the end of the month, business returned to normal, but for how long, is difficult to say. Expectations for the upcoming crop is good, but the heavy rain experienced in key producing areas could delay the crop if it persists for a prolonged period.

Bench Maji Union, located in south western Ethiopia, is investing for the future and the principle target of this investment drive is infrastructure. This was identified as the major cause hindering access to coffee farmers in this region and the construction should help primary cooperatives to hand in more coffee to the Union. New roads and warehouses are being built for the upcoming season. However, infrastructure is not the only target, human capital is also the key to the scalability of the Union. They have hired more managers and quality experts to help the primary cooperatives grow, and not let quality suffer in this growth drive. 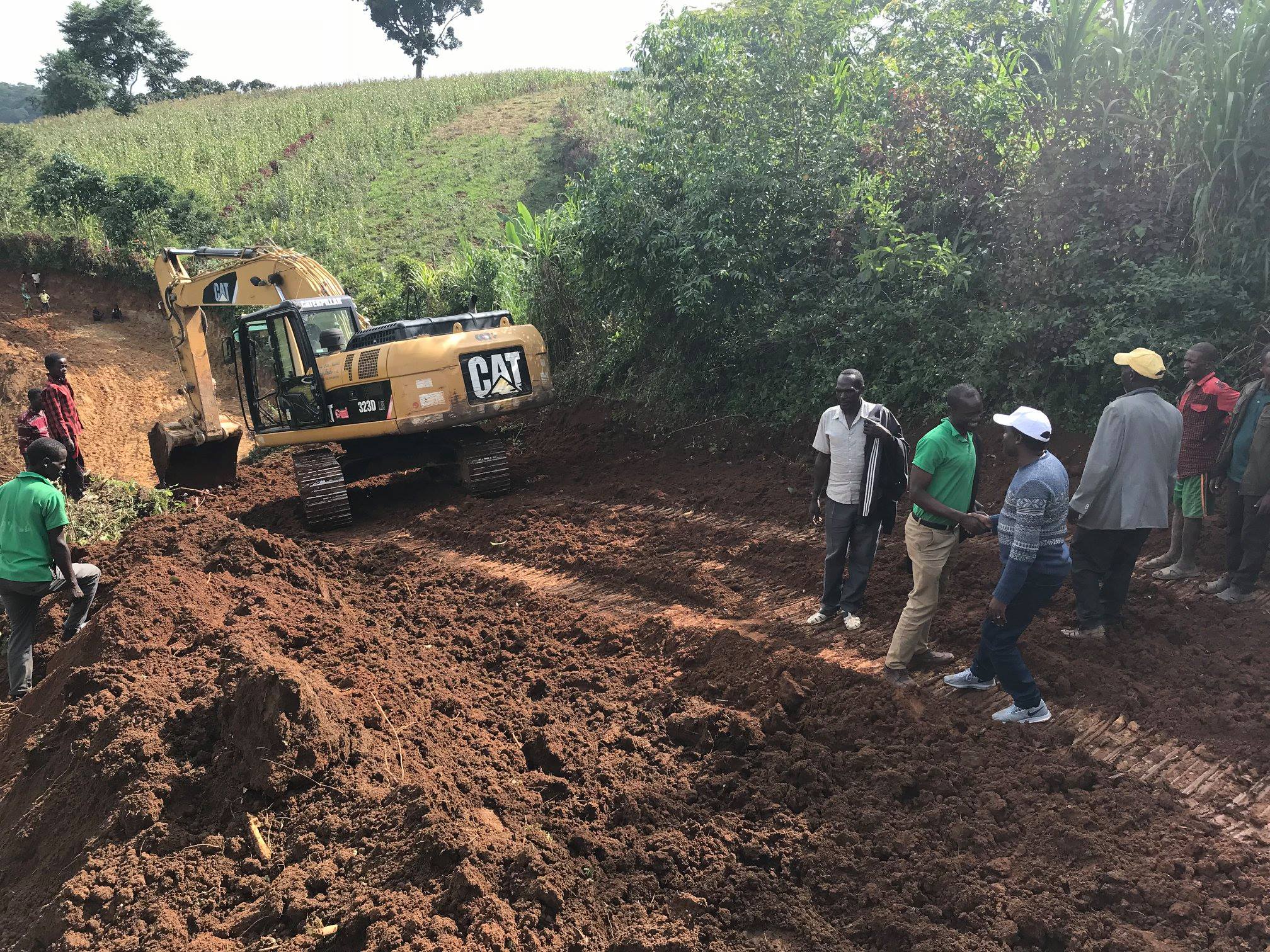 Latest figures from Icafé show that the 2017/18 harvest was 10% up on the previous year. As you can see, coffee production has remained relatively stable in the last decade, but with more fincas that surround San José under pressure to sell to estate agents, there is concern production could dip. However, Tarrazu, arguably Costa Rica’s most famous region, continues to grow in output, and constituted 40% of the harvest this season. The cause? Major renovation at farm level, introduction of new varietals and new areas converting to coffee production. Coto Brus, Turrialba & Perez Zeledón continue their downward trend in production, becoming more marginal as the seasons pass. 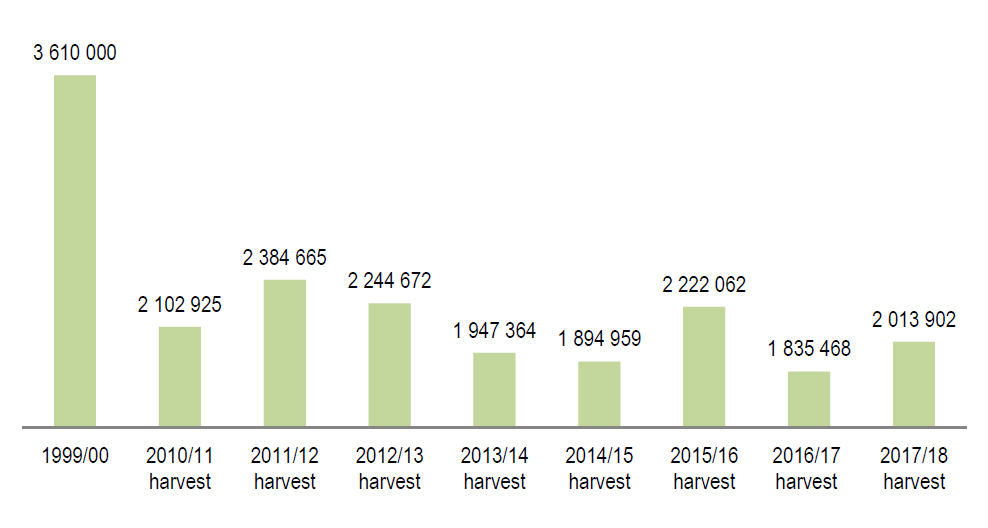 Overall the harvest just gone was characterised by atypical rains in January, a large outbreak of red spiders in the West Valley, good yields, the approval of social welfare insurance for coffee pickers, and a new tax policy that will add a 13% tax over the purchase price. This will make Costa Rica coffee more expensive, but more sustainable in the long run. Often coffee legislation and practices in Costa Rica lead the way in the coffee world and hopefully other origins will take notice.

Icafé published its first crop estimate for 2018/19 that shows a 9% decrease on this crop to 1,834,476 fanegas, which would be the lowest ever produced! Unseasonal rains post flowering, red spider attacks and strong winds plague the coffeelands. Roya is still an issue, concentrated in the Central valley. Many producers are reluctant to offer on a differential with the current NYC.