Will these lower levels persist? Commerzbank estimates that the first quarter of 2018 will see an average value for the NYC at 145 c/lb driven by the prospect of a world coffee production deficit in the crop year 2017-8. USDA estimates that carryover stocks are at a six-year low and coupled with Conab slashing its estimate of the 2017 Brazil coffee harvest by 790,000.00 bags, unless we see bumper crops across other producing countries, we might observe a gradual rise of the NYC. 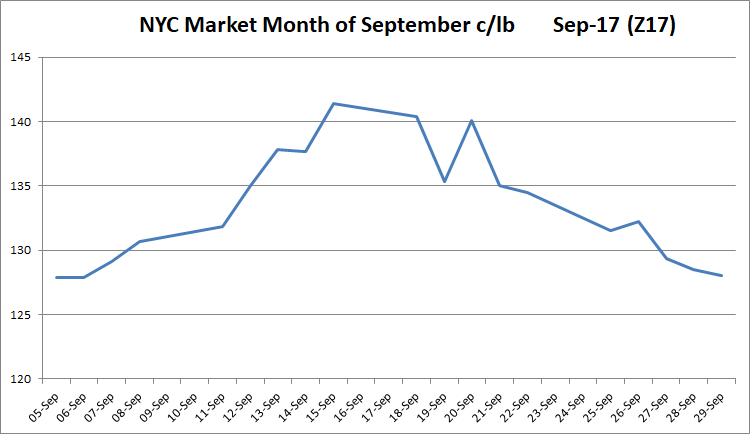 Flowering on Robusta trees in Espirito Santo, Brazil began on time and the trees were full of white blossom. This is good news as after back-to-back seasons of drought in Brazil’s Conilon areas, the country was left with insufficient Robusta supply which left domestic roasters short of that quality of coffee. As mentioned in previous reports, Brazil was reportedly very close to importing Robusta from Vietnam to cover the domestic shortage. The market month of November closed the month trading at 1,968 $/mt and with the crop also going well in Vietnam, prices could steadily fall over the coming months.

US monetary policy is being reined in following the very loose policy action of the last few years, and the central bank has started the tightening process. USD/GBP was trading around 1.3 at the beginning of the month and strengthened to 2.3%, finishing the month trading at 1.33. HSBC predicts GBP/USD to hit 1.20 by the end of 2017 and EUR/GDP to be close to parity. Coupled with the low market, signs are that this could be an opportune moment to cover medium term positions. GBP/EUR finished September trading in the 1.13 region.

There are worrisome forecasts for further dryness in major Brazilian growing areas. Central Brazil appears to be the worst affected and in some states crops started blooming in August, which is atypical for many areas across the coffee belt. It’s not all bad news however; reservoirs in Espirito Santo (the country’s main Robusta region) that were drained because of the drought in 2015-16 have been reported as nearly back to pre-drought levels.

Reports from Southern Colombia indicate quality is top notch, but concerns about volume abound. Last year’s crop exports totalled around 14 million bags and many sources indicate that there could be a slight drop in volume, but nothing to be too concerned about. The average prediction is about 13-13.5 million bags. The drop in production is due to trees having less energy to expend following a bumper crop year, therefore they naturally do not grow as much cherry.

The harvest in the south is winding up, and we are seeing some beautiful coffees coming out of Cauca and Tolima in particular. The first ripe red cherries have been spotted on trees in Sierra Nevada, where much of the organic coffee we source comes from.

The current Vietnamese crop appears to be all but sold. Rains continue and cherries are reported to have developed nicely. Many farmers are hoping for less rain during the picking and drying period, which runs from the end of October to December.

According to CONAB (National Commodity Supply Corporation of Brazil), 2017 harvesting production is estimated at 44.74 million prepared coffee bags. This year is the off year in the two-year production cycle in the majority of producing states, and average productivity per hectare is also down. Minas Gerais state may have a production 20.7% smaller than the 2016 harvest at around 24.04 million arabica coffee bags. Just under 20% (19.8%) of Brazil’s total export sales over the period from January 2017 to August 2017 went to the United States (US), with Germany coming in a close second at 17.1%.

October is always a time of both reflection on the past crop, and prediction & chit chat about the upcoming crop year, because the harvest is finishing up. We turned to Augusto Rodrigues de Melo, the owner and manager of Fazenda Palmital, a single estate we have been working with for many years, to get an overview of how the previous harvest (2016/2017) went. He highlighted the speed of the harvest which lasted just 79 days. This was achieved using “derriçadeiras”, and considering that the farm is in the mountainous region of Cabo Verde, this was some feat! Derriçadeiras are a kind of a power machine that look like two hands clasped together, and are a very common and helpful harvesting tool in the more mountainous regions of Brazil where the bigger machines that require a flatter surface cannot operate. Their use on the farm helped Fazenda Palmital reach their largest ever production, totalling 16,000 bags with an average yield of 43 bags per hectare.

​The 2017/18 harvest is on its way! This year has been exceptional due to the excessive volume of rain on the Costa Rica coffee lands in the months of May & June. If we take the first 9 months of September, it’s predicted to have the highest rainfall on record. 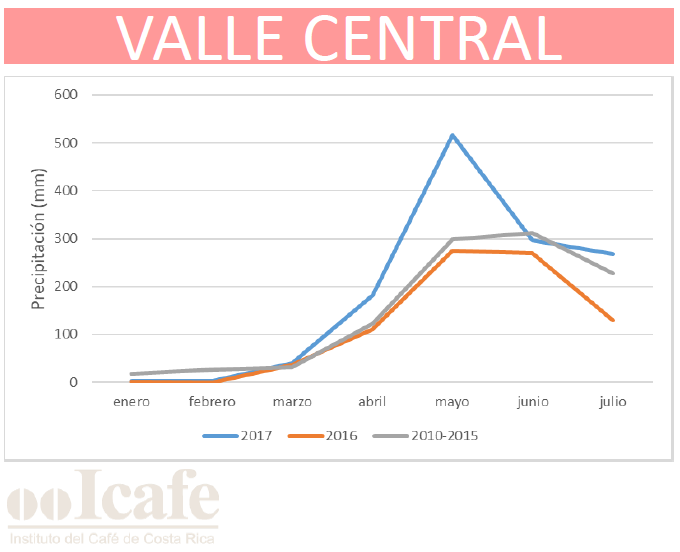 The graph above shows rainfall in the Central Valley and you can see a significant increase compared to the previous six years, with it peaking in May. Luckily, this heavy rain has not damaged the crop, but it has impacted its timing, with the harvest expected to start a few weeks earlier than last year. The latest Icafe estimate is a 15% increase in production compared to last year. This increase is predicted in all of the producing regions, with the top 3 being West Valley (20.23%), Perez Zeledon (19.14%) and Tarrazu (15.66%). Almost a third of the upcoming harvest is committed, with differentials still high. SHBs were trading in the +60 c/lb range with even HBs and HGAs trading at higher than normal levels. Many international roasters are looking at other central options such as Guatemala and Nicaragua, where the SHBs and SHGs are more affordable.

Having featured some lesser known origins in our last report, we now turn to the Democratic Republic of Congo (DRC), commonly known as Congo. In the 70s and 80s Kivu coffee was prized for its quality due to its unique terroir which produced a very different cup profile to other East African coffees. Quality Kivu coffee was commonplace among much of Europe. At the height of its fame, up to 120,000 tonnes a year were exported. However, with the decline of the Mobutu regime and the civil war that ensued, overall export values plummeted to 8,000 tonnes a year. The good news is that change is afoot.

Our focus turns to the foothills of Mt. Ruwenzori, locally known as the Mountains of the Moon. Work began there 5 years ago with numerous smallholders from the surrounding area, to unite and form a cooperative that had the capability to process and export its own coffee. This was when Kawa Kanzururu Cooperative was formed. Each participating farmer contributed 50$ from their own pocket to build washing stations and depulpers, to be managed and run by the Cooperative. They now manage 16 micro-washing stations, processing the coffee of almost one thousand smallholder farmers. Further growth is expected in the years to come.

The name of this special cooperative, “Kanzururu”, derives from the white glaciers of Africa’s third highest mountain, and is a symbol of the purity and cleanliness of the fully washed coffee. The water is crystal clear and the cups are super clean. Cup scores for these coffees range from 84 to 86 SCA points, and in the 2017 edition of the DRC cupping competition, “Saveur du Kivu” in Bukavu, CooKKanz (as Kanzururu cooperative is abbreviated) won 6th place with a score of 85.45.