The first day of the month closed in the 127 c/lb region and the 10th of October hit the month high, closing at 131 c/lb. It tumbled the next day and then traded in a range between 127 c/lb and 123 c/lb for the rest of the month. Looking at levels for the month in a historical perspective, Arabica coffee prices are low. Looking at spot prices for the New York market over the last decade, prices went as low as 101.95 c/lb and as high as 305.30 c/lb. Many origins seem to be bullish on upcoming crop volumes, so a big increase in the market is unlikely from a supply perspective. That said, worries over rainfall levels in parts of Minas Gerais, Brazil’s biggest Arabica growing state, abound. Concerns about stressed trees, and flowers aborting remain a worry for the development of cherries for the 2018 harvest. 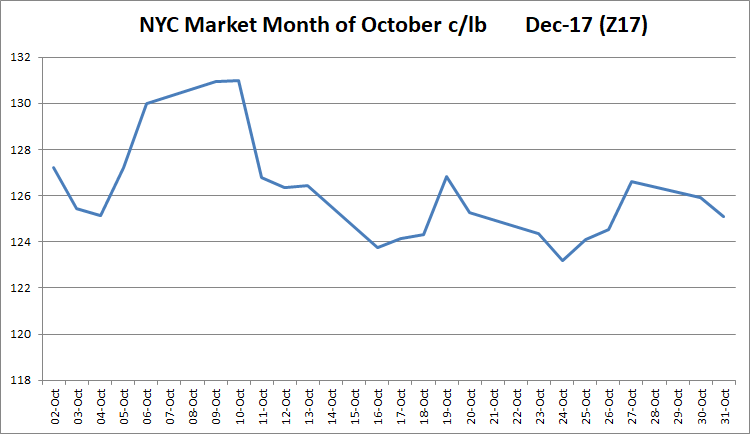 The first notice day for London’s November coffee contract was Wednesday 1st of November and there was some significant volatility in the last week of October. The first day of the month closed at 2,007 $/mt and the last day closed at 1,902 $/mt, which is a 5.2% decrease.

Talk of the town was about what the Bank of England (BoE) would do in their meeting on the 2nd November. GBP/USD hovered in the 1.32 region for most of October, rising to 1.33 for a few days during the final week of the month. As soon as the news came out that there would be a 0.25% rise in the interest rate, the first time in 10 years, GBP/USD fell from 1.325 to around 1.30. Even though the panel vote was a 7-2 split, the general sentiment was not positive and the market interpreted the news as dovish, with GBP depreciating against both the US Dollar and the Euro. Uncertainty abounds in this post Brexit world.

As mentioned earlier, rainfall is a concern in Brazil. Cooxupe, the largest cooperative in Brazil, has indicated that production for the 2018 crop may fall short of early estimates.

October is the peak of the harvest season in many of the southern departments in Colombia. We just landed a container from Cencoic Cooperative in Cauca with a mixed container full of Indigenous reserves and Project 121 lots. We can happily confirm that the quality of Cauca coffee this season is stellar! Excelsos are still trading in the +15 region.

Heavy rain has hit Vietnam, especially towards the end of the month, which has hampered efforts to dry coffee. Price ideas between farmers, exporters, and international buyers remain far apart. Stocks were run down by strong exports after the disappointing 2016-17 crop. Will tight supplies see an increase in the London market? Increased Conilon projected export volumes might make up for some of the shortfall in the East.

Export data in October 2017 compared to this time last year is down by over 50%. Projected volumes covering the harvest period from November to February are also below what they usually are. Unfortunately, the March to July crop is not expected to make up the shortfall and is predicted to be 40-50% below the norm, driven by lack of flowering on coffee trees across the Indonesian archipelago. Not enough coffee coupled with crop delays and many exporters who find themselves short, has led to a surge in local prices. Most coffee coming through is already committed.

The harvest in Aceh, Sumatra has just begun. After some consistent rain, Permata Gayo Cooperative are confident that the quality of the harvest will be good. They work with 2,000 members in Aceh and this season they have two new processing units, one of which is the biggest in the Gayo district. More and more members of Permata Gayo are interested in cupping their own coffee and Agriterra Netherland and Cooperative Coffee Montreal are providing cupping training for these farmers, something quite new in the region.

Talk, as ever, is on the potential changes to the ECX. There is a consensus that the new regulations are likely to go ahead. This could have a significant impact on Cooperative Unions, as their big advantage is that traceable coffee can be sourced through them. With the new rules, cooperatives will not have to go through Cooperative Unions to have their coffee exported with full traceability. In a more competitive export market, this could mean an increase in the service and efficiency of unions, but it is too early to tell. What is certain is that many more exporters will appear in the coming year as the market is opening up. In a sea of changing regulation and uncertainty, knowing your supply chain has never been more critical.

On Wednesday the 11th October the National Bank of Ethiopia (NBE) announced a devaluation of the country’s currency, the birr, by 15%. The interest rate rose 2% from 5% to 7%. This measure is seen by many as an attempt to boost the growth of the country’s export sector which has experienced a sluggish period of late. It is also expected to reduce forex shortages and to ease the debt burden.

If you haven’t yet seen it, Aaron Davis, Senior Research Leader in Plant Resources at Royal Botanic Gardens, Kew, released ‘The Coffee Atlas of Ethiopia’. We were lucky enough to see his presentation on it at the Nordic Roaster Forum in Oslo, it contains a wealth of data on producing regions across the country and their susceptibility to climate change over the next century.

The Peruvian harvest was delayed in the North, hence their under representation in the Cup of Excellence (CoE). The harvest went very well with some amazing lots found, but whisperings from Northern producers indicated that it was a shame the CoE happened so early in the season. Higher altitude northern farmers were not able to submit their coffee because they had not been harvested by then. This was not helped by the fact that there was a delay this harvest across the whole country, mainly due to a drought in 2016. Evidence so far indicates that quality is very good for this crop. We have noticed average cup scores are significantly better than this time last year. Good weather has greatly helped the drying and processing of Peruvian coffee this season.

Café cooperative in Jaen have noticed a significant increase in quality, mainly due to the new warehousing methods of the cooperative and how they store their parchment. Yields are also up. Their motto is “culture of quality” and this reverberates through the whole supply chain from organic fertilisers to their dry mill. The volume of coffee received at this point in the season is a record for the cooperative and coffee is still dripping through from higher altitudes fincas. This is not a unique case, many other cooperatives we have spoken to have observed the same. This is good news especially because floods last year destroyed a great deal of infrastructure and was ruinous for many producers and cooperatives. There have been less defects found in the coffee too! Projections for the 2017/2018 harvest are good. Contrary to some origins, there is more land being allocated to coffee growing. Rain is regular and this is important for the flowering of the coffee plants.