November saw the British political leaders ramp up their campaigns for the election on December 12th, hopefully the newly elected Conservative party may help gain a consensus on Brexit, however as has been the case for the last few years this is no easy feat.

Liverpool extended their lead at the top of the Premier League and Jose Mourinho made a return to the League as Head Coach of Tottenham Hotspur. Can the ‘special one’ help Tottenham get back into the top four?

It was a big month for the coffee industry as prices rebounded away from the 100 c/lb level and tracked upwards, closing the month at a level just shy of 120 c/lb. Many believe that we could be leaving the low-price climate behind us. In this month’s origin focus, we head to Africa and visit DR Congo, Ethiopia and Tanzania. 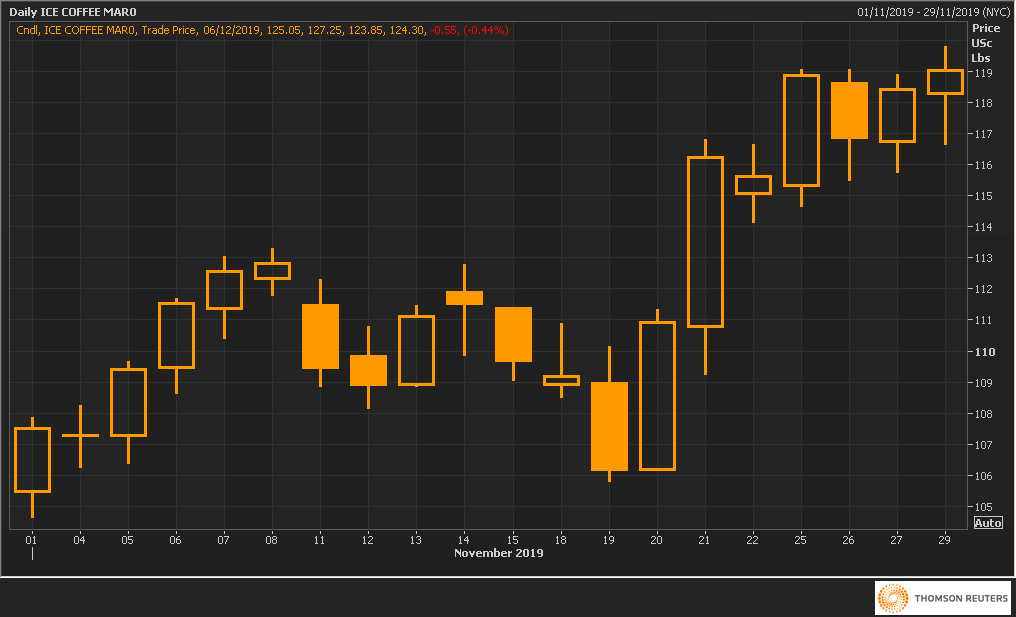 The market opened the month trading at 105.45 c/lb. The first day’s low of 104.65 c/lb was also the month’s low, and the first week saw the market trend upwards to a high of 113.30 c/lb on the 8th of November. It spent the majority of the next week losing value and hit a low of 105.80 c/lb on the 19th of the month. This was followed by a big bull day on the 20th and an even bigger day on the 21st, where the market opened at 110.75 c/lb, dipped to 109.25 c/lb, hit a high of 116.80 c/lb, and closed the day at 116.25 c/lb. This represented a range from the day’s low to the day’s high of 7.55 c/lb; a range we have not seen very often this year. The month closed at 119.25 c/lb, representing an increase of 13.8 c/lb over the course of the month. Much of this bullish sentiment was driven by fundamentals and the reported lack of supply to satisfy growing global demand. We’ve been in a persistently low-price environment for nearly three years now and it looks like this could potentially be a reverse of that trend.

The COT showed that the funds trimmed their net short position over the course of the month, although they did extend their short position by 2,138 lots between the 12th and 19th. After that, much short covering ensued.

The cable started the month trading at 1.293. It spent the 1st week of the month trending downwards to the month’s low of 1.277 on November 8th. On that day the ratings agency Moody issued a warning to the UK about the 1.8 trillion Pound Sterling of rising public debt, which accounts for more than 80% of annual economic output. With the major political parties promising big spending increases, concerns were widespread about the health of the UK economy. Other factors saw Pound Sterling strengthen against the US Dollar to the month high of 1.295 on the 18th; Boris Johnson pledged to not cut the corporate tax rate from 19% to 17%. The final 10 days of the month saw Pound Sterling depreciate to 1.283 before appreciating again to 1.293 for the month’s close.

GBP/EUR did not follow the yoyo trend of the cable. It started the month trading at 1.159 and Pound Sterling gradually gained value over the course of the month, closing the month at just over 1.17. Although Brexit dominated the narrative, much attention also centred on the health of the Eurozone and whether or not there is the political will to deepen integration to help shore up the currency bloc. 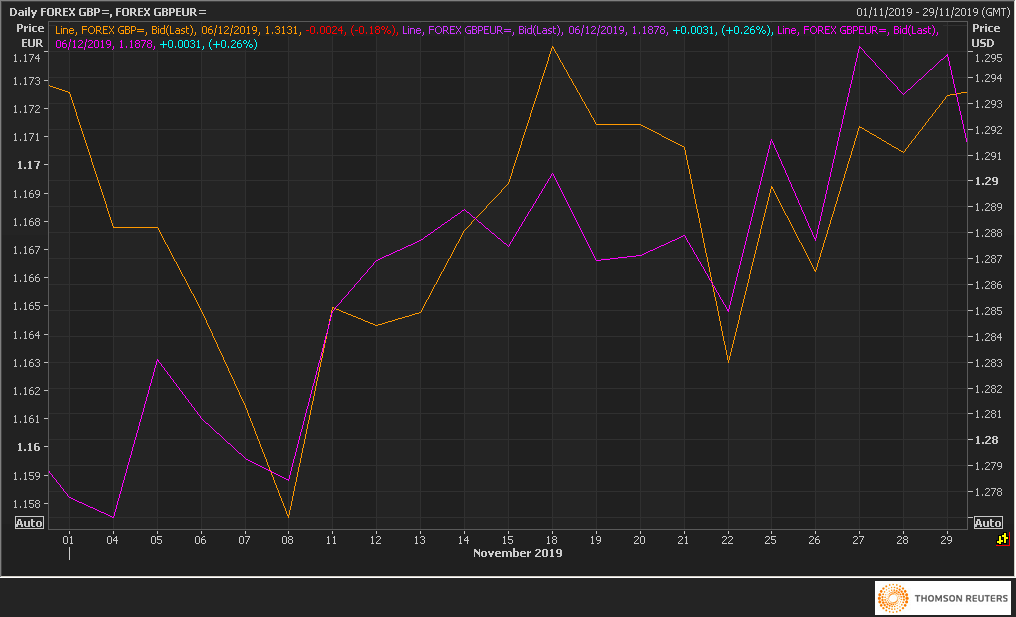 In Brazil, lack of rain and irregular precipitation patterns fuelled the bullish sentiment held by many market players. A report published by ABN AMRO stated that Brazil accounts for 37% of global supply for coffee. Interestingly, it also accounts for 14% of global demand; a fact not as widely discussed as the supply figure. This data confirms Frank’s statement that ‘there’s a lot of coffee in Brazil’.

The October monthly ICO market report outlined that the difference between Colombia Milds’ differentials and other Milds’ differentials increased by 69.4% to 5.10 US cents/lb. This is in line with what we have seen from Colombia: excelso and supremo differentials have steadily risen over the last few months. Farmers have been holding out for better prices and this has worked; however, export data from September show that exports of Colombian milds decreased by 8.05%. It’s unclear whether this was mainly due to reduced supply or the larger Colombian buyers going to other origins to source cheaper coffees.

Vietnam got hit by Typhoon no. 6 in the first half of the month and the coffee regions were inundated with heavy rainfall. Peak harvesting had not yet begun so thankfully damage was limited. After the storm, harvesting picked up in earnest and by the end of the month between 30-35% of the crop was picked. This is down on last year where 40% of the harvest had already been picked. Many farmers point to the prolonged drought in March as the main reason. Crop estimates point to a 30 million bag harvest, although if there are storms in December, this number will likely not be reached. The ICO has predicted 31.2 million bags, but this appears a bit over what exporters expect. Quality is reported to be good, but average screen size looks smaller than last crop.

There has been much fanfare of late about coffee from the Democratic Republic of Congo (DRC). Buoyed by interesting cup profiles and untapped terroirs, buyers old and new are returning to this part of Africa in search of coffee. Some roasters see it as one of the last frontiers of speciality coffee and there is a drive to help support the development of a sustainable coffee industry here. It was not always as elusive as it has been for the last few decades. Coffee used to play a much larger role in the economy and in the 1980s when exports represented nearly 75% of GDP, coffee was one of the nation’s top five contributors to national output. By 1992, production had fallen to 95,000 metric tonnes, and formal exports dipped to just over 57,000 metric tonnes. Due to civil war, market volatility and regulatory change that left farmers with little incentive and no financial support to produce coffee, export numbers plummeted. Thankfully, the last 10 years have seen exports rebound, although from a very low base. 11,000 MT were exported in 2015 and it’s predicted that 12,000MT will be exported in the upcoming crop year. This is expected to grow at a faster rate if the smuggling of Congolese coffee to neighbouring countries is cracked down on.

The country’s main Arabica crop is from October through to March, with a fly crop from May to July. In the 2018/2019 crop year, Arabica represented 36% of total output, with Robusta representing the other 64%. The North Kivu region comprises around 85-90% of the country’s total exports and therefore the peace and stability of this region is critical to the health of the nation’s coffee industry. At the end of the month, angry citizens in the town of Beni, North Kivu, torched the town hall and the UN compound there, protesting against the inability of government forces and UN peacekeepers to prevent a deadly attack by the Allied Democratic Forces (ADF) rebel group. Peace and stability in the North Kivu must be a priority for the government. The current head of state, Felix Tshisekedi, has an opportunity to harness the renewed interest in the country’s coffee industry. Let’s hope he seizes the moment.

Ethiopia is unique in that it has a very strong domestic coffee market that often competes with its export market and can go toe-to-toe on both price and quality: up to 60% of all coffee produced in the country is consumed internally, according to some estimates. At the end of November there was a meeting of exporters in Addis about the high local price for parchment and cherry; concern that this could render them uncompetitive in the international market was the reason for the meeting. It’s no secret that many of the exporters have booming import businesses and use coffee as a vehicle to secure the US dollars that can pay for their imports. We’ve covered this when we discussed the role of Djimma Grade 5 in a previous report, but there is a limit to how low an export price they can agree to and the high local prices clearly had many players worried.  Last year Yirgacheffe 2 could be sourced at around 11-12 birr per kilo, and it was trading for around 18 birr per kilo towards the end of the month. The reason for the higher prices is mainly down to anticipated lower production across the major growing regions.

Harvesting kicked off in Oromia state towards the end of the month and early reports indicated quality was good, albeit in lower quantities than originally expected. During our recent visit, we travelled south-west to Bench Maji, which typically begins harvesting up to three months earlier than other growing regions. We spent time with Bench Maji Union, who are helping the region increase the quality of their coffee. In the past, much of this area’s coffee was blended with Djimma or Limu coffees in Oromia and exported under those grades. We feel that this area has huge potential of its own, especially with natural coffees. Because the area harvests much earlier than other regions, one could argue that Bench Maji gives Ethiopia a fly crop…very useful if you want fresh Ethiopian coffee all year round!

The 2019/20 crop is roughly 20% down across the country as a whole, with the Kilimanjaro region down as much as 35% according to some estimates. The ICO’s October Market report stated ‘Tanzania could see a decrease of 17.9% to 924,000 bags in 2019/20 as its Arabica crop enters an off-year.’ Tanzania’s Arabica harvest is June through to December and the best shipment months tend to be from September through to December; roughly 70% of production is Arabica and 30% Robusta. Coffee is Tanzania’s largest export crop and the reduction in exports will have a large impact on the amount of US Dollars in circulation. Exports remain dominated by large multinationals and there are few independent local players. We work with closely with Mambo, an independent, Tanzanian owned exporter who has access to some great coffee producing groups across the country. We have been working with them on sourcing some great coffees from the Kilimanjaro region in the north of the country. As previously mentioned however, it’s been a tough year for producers there.

With the low NYC price and the reduced output, it’s been a very hard year for Tanzanian coffee farmers and there’s been a significant reduction in the application of fertiliser as a result. The 2020/21 crop should be a bigger harvest as it will be the ‘on year’ in their biennial cycle, but the reduction in agricultural inputs will likely have a serious negative effect on the number of bags Tanzanian coffee farmers will produce. Differentials will likely rise, but they are still very competitive when compared to their neighbour to the north, Kenya. Although production estimates for the next crop are less than many hoped, we remain optimistic that if the NYC continues to rise, farmers will invest back into their farms and production will rebound. We just landed our first container of the season, get in touch for more info on these special coffees!