Welcome to the November market report. EU leaders backed Theresa May’s Brexit deal and she spent the rest of the month trying to bring UK politicians on board. We will be looking at the whole of 2018 in next month’s report and hope to be able to report that closure may have been attained before the end of this year. In this report however, we turn our gaze to Kenya, Ethiopia and Papua New Guinea. For the next series of market reports, we will define a few key terms we often use with the view of compiling a glossary of key market report terms.  This week, we look at The Commitment of Traders Report (COT). Find out more below. 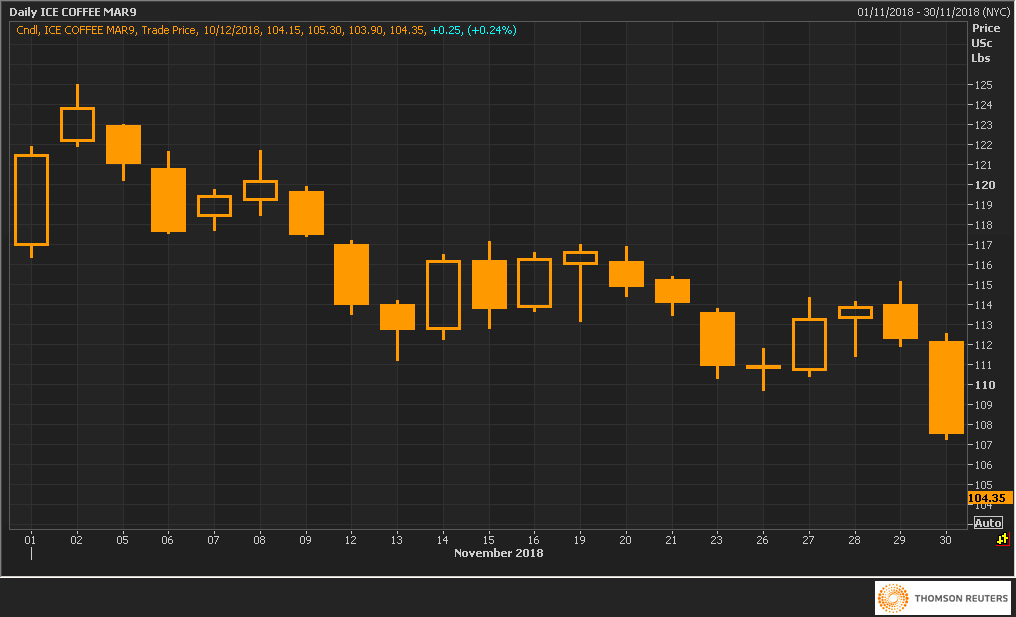 Regular readers will know that we often reference The Commitment of Traders (COT) report. Published every Friday evening, this complex set of numbers can easily confuse. However there is a logic behind all of this:

What is it and why is it important?

The aim of the Commitment of Traders Report is to provide detailed information on which type of market participant is doing what and many traders use this information to confirm or deny their opinion regarding market direction. What do we mean by market participants? In a nutshell, anyone who uses a futures market is either a commercial trader or a speculator. Commercial traders include anybody involved in the supply chain and they come to the futures market looking to offset their commercial risk. Speculators (also known as funds) are happy to take on that commercial risk as they seek a profit. Speculators are often referred to as ‘the funds’ or ‘non-commercials’. By looking at the COT, we can watch how the funds are behaving and from this draw conclusions on market direction.

The market (Jan-19) opened the month at 1687 $/mt and was fairly quiet for the first three weeks, trading in a narrow range. On the last day of the month it nudged just under the 1600 level, closing at 1599 $/mt. As we head into December, new crop shipments coming out of Vietnam are expected to generate more activity. Most reports we see point to the downside.

Pound Sterling started the month weaker than how it started October, with GBP/USD hovering around the 1.28 level. After the Democrats in the US managed to take control of the House after the mid-term elections, the Dollar weakened against the Pound, moving to the 1.31/1.32 levels. This did not last however, as fears that May’s Brexit deal would not pass Parliament. The month closed as it began, in and around 1.28.

GBP/EUR started the month trading around the same level as it finished the month: 1.13. That is not to say it stayed at that level for the whole month however. The UK government received another resignation from a Brexit secretary (Dominic Raab) on the 15th November and the Pound weakened against Euro to 1.12, before trading its way back to 1.13.

The USDA upped their estimate for the Brazil 2018/9 crop by 5%, based on better productivity results. The predicted monster crop seemingly gets bigger and bigger as the weeks go by.

In Colombia, crop data showed a decrease in coffee production for the 1st half of 2018 driven by heavy rains in key producing areas. October 2017 to September 2018 saw a 5.5% decrease in exports, with 12.7 million bags exported. Favourable forecasts for the start of 2019 bode well for a bounce back and there is talk that an extra 0.6 million bags could be exported in the 2018/9 crop year.

November saw Vietnam receive some very favourable weather with consistently strong rains over the final quarter of 2018. The harvest is two weeks ahead of schedule and exporters are bullish about the volume. Selling of the new crop picked up and 5-10% of the crop is reported to have been sold. As we saw in Brazil in October, a shortage of cargo space hampered exports.

Ten years ago Nairobi had a population of 3.5 million people and now has an estimated 6 million. As a consequence, pressure is building on land around the capital and many coffee estates are selling up to property developers. This is concentrated in Kiambu county, so if you like coffee from there, you will notice less and less coffee offered from that County. Maize has been touted as a saviour as there is hope that areas in Western Kenya that grow Maize may switch over to coffee. However, currently there is no substance to these hopes and until that changes, production keeps sliding southward.

Plenty of rain was seen in the months leading up to November, which bodes well for this harvest. This is welcome, as Coffee Borer Disease (CBD), continues to be a thorn in the side of Kenyan farmers. Volumes for this crop are expected to be as much as 20% down on last crop. Kirinyaga County saw a prolonged cold snap between June and October and some estates will lose up to 50% of their crop.

Country Director for Agriculture Bernard Mukongo reported ‘Coffee farmers in Kirinyaga County are counting losses due to unusually cold weather. Farmers in the area lost almost half of the entire season’s crop to the cold…The prolonged cold spell (from June to the beginning of October) coupled with delayed short rains are the main factors for the crop shedding leaves and leaving unripe berries exposed to lack of chlorophyll.’

Official policy has been to encourage farmers to use Calcium Ammonium Nitrates (CAN) fertiliser which boosts leaf regeneration. Mr Mukungo told farmers to spray their crops with foliar feeds once the leaves start regenerating to hasten ripening of berries.

The Nairobi Coffee Exchange auction will run up to 11th December and resume on the 8th January when we expect to see more special coffees coming through the auction. We’re working on a container of special lots for January or February shipment so watch this space.

Ethiopia, the largest coffee producer in Africa, is the world’s sixth largest coffee producer. Coffee is everywhere in this special origin and roughly 15% of the country’s population is involved with coffee, at different points along the supply chain. Nearly 95% of coffee produced is by small holders who generally manage less than half a hectare of land dedicated to coffee. Pesticides and fertilizers are typically not used so even if the coffee is not certified organic, there is a high chance that it is by default organic. Arabica grows wild in the Ethiopian forests and an estimated 45% of the country’s total production comes from managed forest, wild forest and semi-forested coffee. Because of the remoteness of some of these places and the ensuing logistical issues, the majority of this coffee is sold as commercial grade coffee. There are less organised groups than in other producing areas and the price gained is low by domestic standards. Growers there are also competing with other actors that want access to the forest for rival agricultural crops and for land. As much as 1/3 of Ethiopia’s natural forests has been converted for these purposes.

It’s not all bad news however. Bench Maji Coffee Farmers Cooperative Union has united over 65 primary cooperatives with the aim of finding international buyers who are willing to pay a premium for this coffee and help conserve the forests that are under threat. With consistent buyers who pay a premium, there are more incentives for the farmers to expand and protect more of the forest. Currently the union counts the support of over 13,000 farmers and by pooling resources, has managed to improve infrastructure which now provides a solid base for improvements in quality and the resulting price they can sell their coffee for.

The harvest should wind down in the middle of December for Bench Maji. Harvesting in the west of the country, where Bench Maji is located, is typically 6 weeks ahead of other regions such as Limu and Yirgacheffe. Other unions that we work with such as OROMIA, will be harvesting well into January. 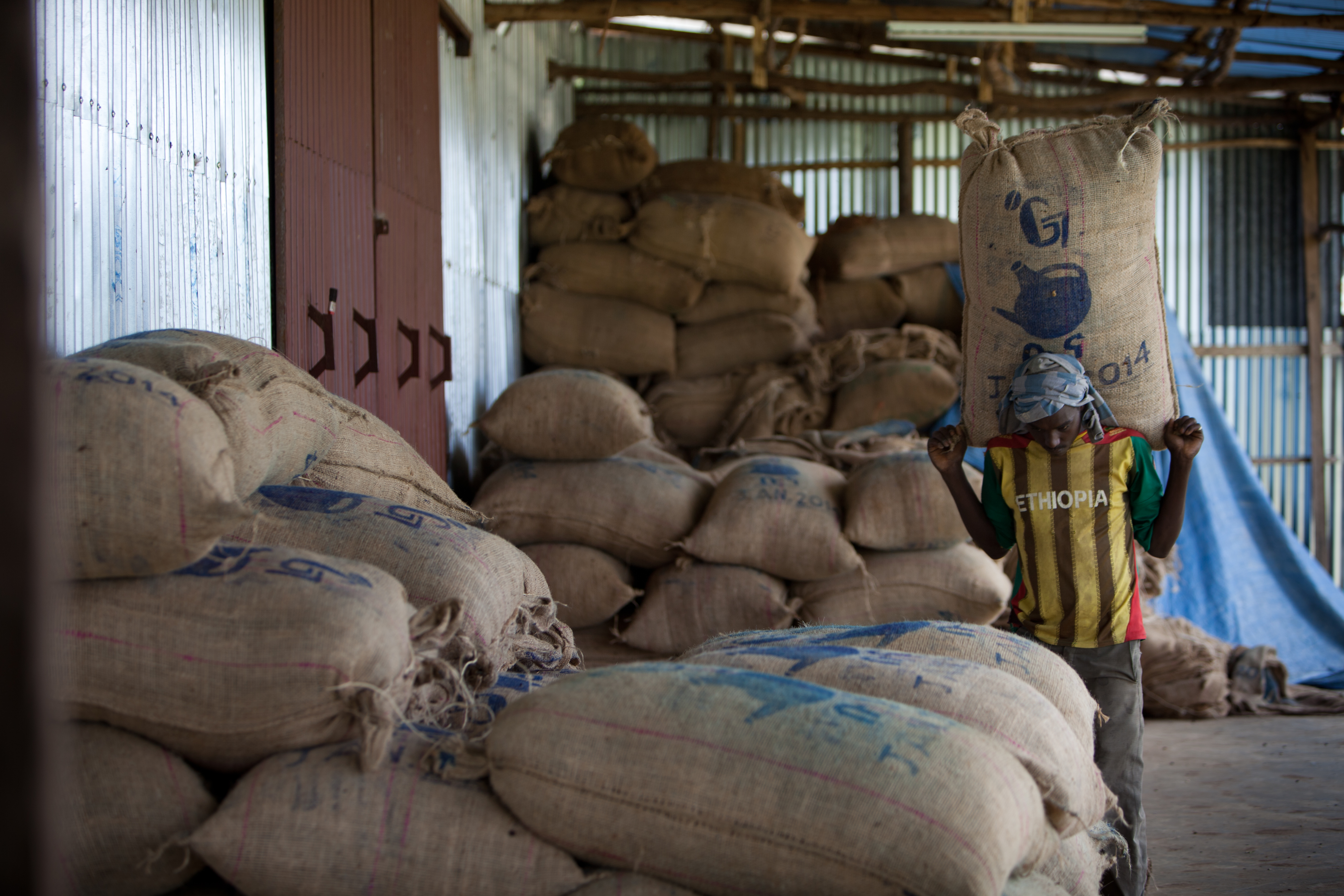 Source: The University of Huddersfield

The coffee industry in PNG remains dominated by a handful of larger players and five exporters constitute 80% of the market. 85% or more of the nation’s coffee is produced by smallholders, with 15% coming from larger plantations. The percentage taken by larger plantations has been shrinking due to the higher cost of production (security and inland trucking) and pressure to surrender titled land that is disputed. The larger estates tend to receive higher prices because of the consistency of their coffee so hopefully their declining numbers will not see a decline in quality over the long-term. The smallholder farmers see coffee as a pure cash crop and have a more short-term view. With the low NYC, many have switched to other crops that yield larger and more immediate returns. This could see a large decline in years to come. Ageing trees remains a big issue. The average age of a coffee tree there is estimated to be in the region of 30-40 years. This is towards the end of the coffee tree’s productive life cycle and this means yields consistently point to the downside. Older trees are also less resistant so require more attention. More inputs and less outputs result in less net income for coffee farmers. Investment is needed, but capital is needed to make this investment.

Just as we touched on earlier with Kenya, the impact of population growth on coffee is also relevant in PNG. Over the last 30 years the population has surged from 2 to 8 million people. Although there has been infrastructure developments-such as the new port at Lae – they have not been able to keep up with the pace of population growth. This has hampered the development of the coffee industry and raised costs for people in the industry. Internal movement and trucking is slow, expensive and unpredictable. However, there is something positive to mention: the government is in the process of approving a new Highlands Highway project that will see the upgrade of the road which connects the port to the highlands. Due for completion in 2021, this could yield some great results.

For more information on the recent history of this origin and the grading change up in 2015, please click here and you want to read a detailed paper on the coffee industry there, check out PNG Coffee Market Study technical report #131 by AECOM in Brisbane, Australia – it’s full of some interesting facts on this oft ignored origin.