Arabica prices remain low and the month started with a 122c/lb level and closed 10c/lb higher. This was mainly driven by a weak dollar and also by a lack of new fundamental news which led the market to move mainly on technical performance. Overall, the 2016/17 harvest stands at around 156.03 m bags, increasing to 158 m bags for 2017/18 with no major concerns about any particular crop. When it comes to global demand, we see a steady growth of 1.3% compared with the same period last year. 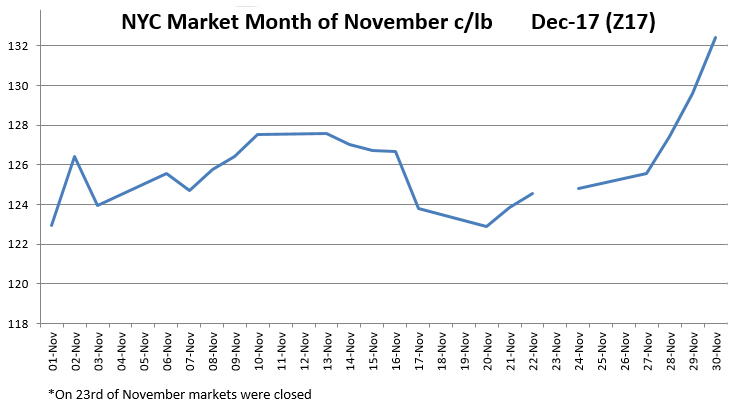 Robusta has long been touted as the answer to increased demand for coffee. In China, Euromonitor suggests that Robusta makes up 90% of domestic coffee sales. As Chinese demand for coffee increases, many suggest that this will cause a significant tightening of fundamentals over the coming years.

Sterling has bounced against the US dollar and Euro since the Brexit divorce bill was agreed between Theresa May and Jean-Claude Juncker at the end of November. GBP/USD reached a two-month high of 1.3548, helped by the Donald Trump tax reform that has also driven a weaker dollar.

Reports suggest there will be a slightly smaller Brazilian production of 50.6 million bags for the 2017/2018 crop, with the 2018/2019 crop predicted to be significantly larger at 58-60 million bags, representing nearly a 17% increase (using 59 million bags). The crop in Vietnam for 2017/2018 is predicted to go over 28 million bags, which is welcome after the low export volume of last year. However, quality concerns abound due to heavy and persistent rainfall. Mould has been touted as a major issue for this crop. The weather in Colombia is good, although the increased probability of La Niña occurring is worrying many farmers and exporters.

The coffee farms on the Apaneca Ilamatepec mountain range are the most productive across the whole of El Salvador, so they are always a good indication as to what one can expect from the country as a whole. If production is low there, it does not bode well for the rest of the producing areas. The good news is that coffee is developing nicely there after an excellent winter, with climatic conditions perfect for the ripening process. The maturation has been homogeneous and so has the bean formation. Although the crop is a little delayed, the producers we have spoken to are all very bullish on both the crop size and the overall quality of the coffee. Currently, the majority of farms at low to medium altitude are in full harvest swing, with the higher altitude farms entering the fray towards the middle to end of December.

We spoke to the Urrutias family and the first cupping results from Finca San Ernesto (Honey) are very positive, with the cups bursting full of sweetness. The yellow honey process works very well on that farm, both in terms of the quality of the cup profile and the price paid for it, but also in terms of how much water they save in the production process. This is the second year we are running the Los Nogales Project with JASAL and we are very excited to see where this project will go. New varieties and modifications to the processes involved in the project resulted in one of the best cupping tables that hit the DRW cupping lab!

The 2017/18 harvest is expected to be better than 2016/17, thanks to an ´on cycle´ and the fact there was consistent rain in good volume throughout the wet season. With current estimates, Icafé predicts that there will be a 15.43% increase in crop volume. Like last year, the majority of the crop is coming from three regions: Tarrazu (37%), West Valley (20%) & Central Valley (14%). Expectations for screen size and quality are also high. 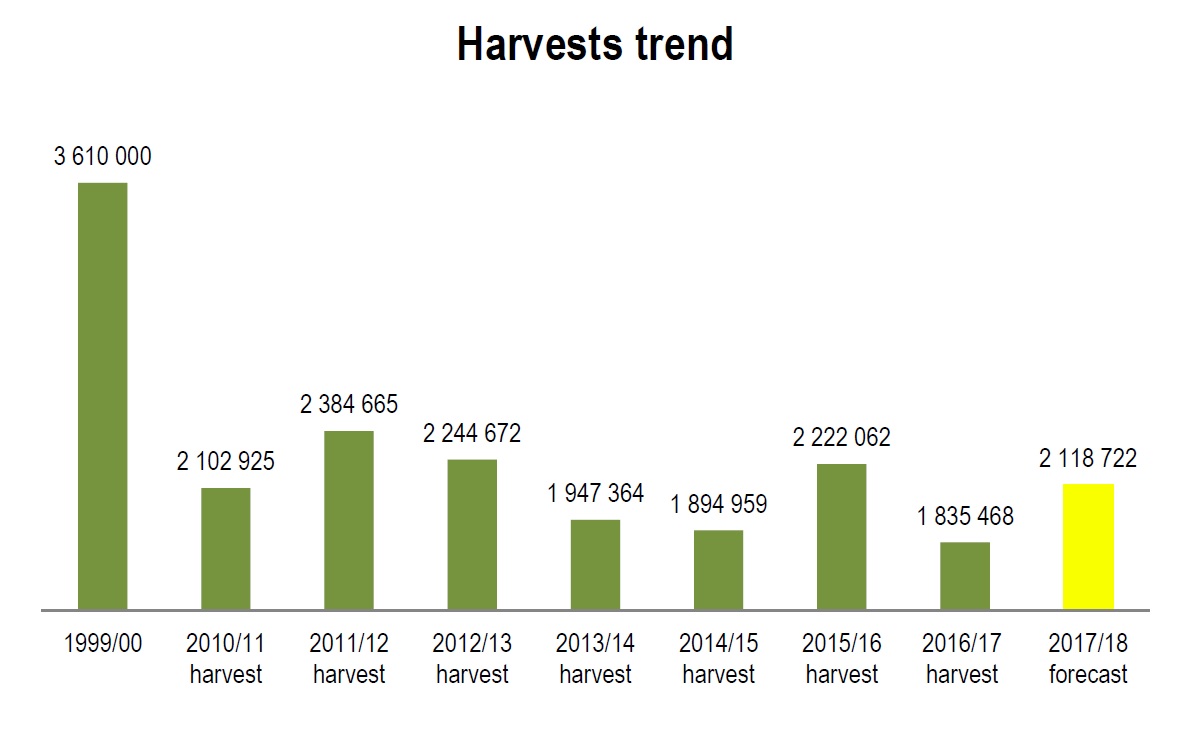 This is positive, despite the destruction caused by the Tropical storm ´Nate´. The country’s infrastructure was badly hit, with the main impact being damaged roads which are affecting the coffee flow. Roads are still being fixed and this will take more time due to the severity of the storm. However, most of the major roads are open, therefore the impact has been muted somewhat.

A good percentage of the crop has already been sold. With low levels of the NYC, differentials remain firm and show no sign of abating. If the harvest goes as predicted, perhaps towards the end of December/beginning of January, we might see these differentials lowering, driven by a supply side increase.

There was a huge amount of rainfall in November across the Kenya coffee belt, which could be both good and bad for the development and quality of the coffee about to be harvested. The rainfall aided the final stage of maturation of the coffee cherries. However, if the rain continues at this pace, it will hamper the end of the ripening process and the drying process, which both require hot and sunny days. Should rainfall continue into December, it will lead to delays in picking cherries and the washing and drying of the coffee. That said, most local players anticipate the majority of the harvest will wind up by the end of December.

Forecasts for the main crop are in the 25-28,000 tonne region, which make the 2017 crop year (calendar year) the smallest on record. This tight supply (25% down on the previous year) is causing prices to surge. Coffees that are considered solid average coffees are reaching prices that have traditionally been reserved for only the finest Kenyan coffees.

However, the forecast for the 2017/8 crop will be aided by a strong fly crop in 2018, which is expected to be a significant increase on the fly crop this year (2017). Therefore, prices next spring/summer might start to relax slightly from the lofty heights we are currently observing.