It was a dramatic month for London and the UK. There was an all London UEFA Europa League final and Theresa May resigned as prime minister. Westminster remained in turmoil and the question mark over how the UK will leave the European Union remained unanswered. On May 17th Luckin, A Chinese coffee chain, raised more than $570 million in its initial public offering (IPO) on the Nasdaq stock market, giving it a value of around $4bn. Could growth in consumption in Asia help the coffee industry with the oversupply it currently faces? This month, we head to Costa Rica, Colombia and Ethiopia. 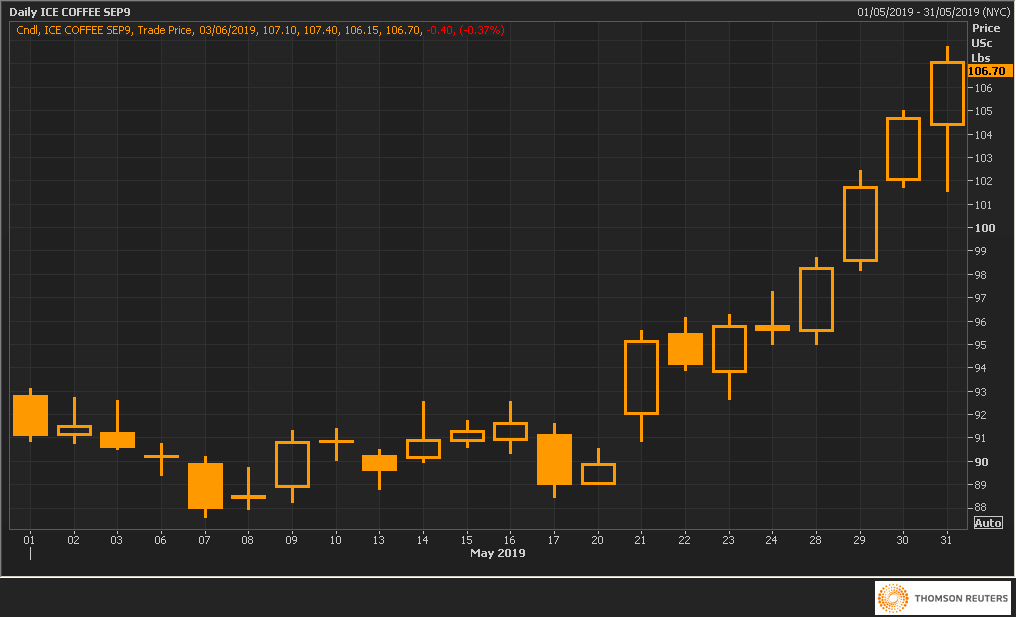 This is the first month in quite some time where the market has closed the month significantly higher than it opened. The terminal closed May 1st at 93.50 c/lb, and gained 13.6 c/lb (14.5%), closing the month at 107.10 c/lb. We were trading beneath 90 c/lb for 2 days on the 7th and 8th of the month, and many commentators feared a nose dive. The drop was thankfully short lived, and the market traded sideways for 10 days before a steady climb to the uptrend. We’ve seen a sustained bearish market for many months now. Could this be the start of a Bullish run?

Robusta also saw a trend to the upside, with September gaining 119 $/mt over the course of the month, which represented a 9% increase. It finished just under the 1,500 $/mt level, at 1498 $/mt. Differentials in Indonesia, Uganda and Vietnam also increased. FOB business picked up, but the excess of Conilon (Brazilian Robusta) that has been handed into the exchange and stock still in Brazil loomed large. Of the coffee at the exchange, Conilon now accounts for 73% of the total stock there.

GBP/USD started the month on a two-week high at 1.3 before strengthening on the back of progress made in cross-party talks-statements to 1.31. Statements confirmed that the Conservative and Labour parties were not far apart on the plans for a customs arrangement. This progress, however, quickly dissipated, and the British Pound slid in value against both the US Dollar and Euro for the rest of the month, save a brief rally on the 24th when Theresa May resigned. Strong manufacturing data from most of the Eurozone countries helped strengthen the Euro and positive growth forecasts later in the month helped ensure this move continued. 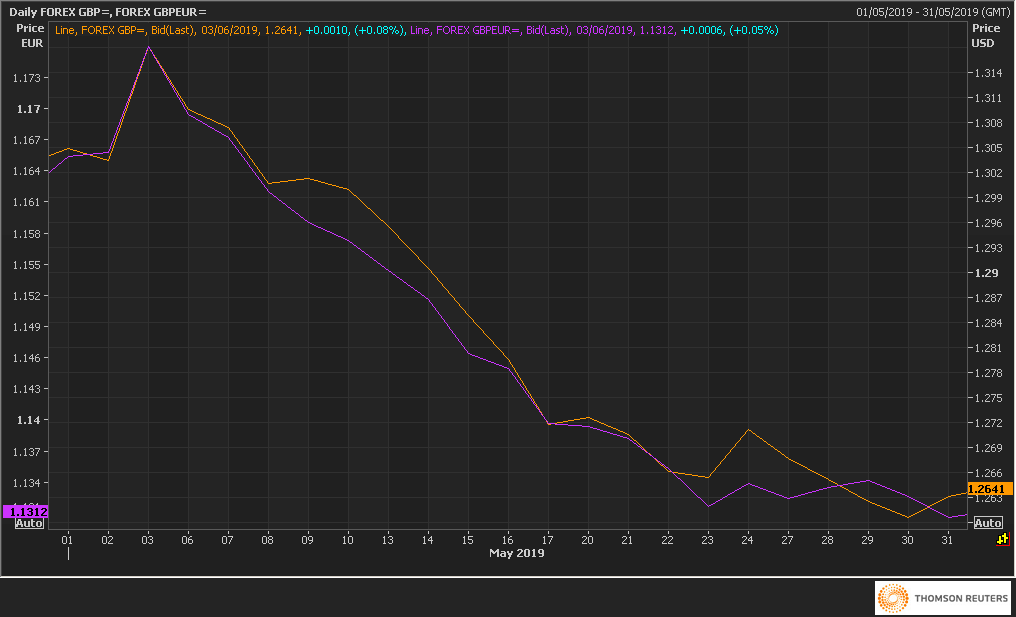 The Brazilian Arabica crop is more heterogeneous than usual, with trees showing all stages of the ripening process. Total Arabica production is projected at 36 million bags, 19% lower than the previous crop, but still a very large crop for the off year in the biennial cycle.

In the 2018/19 marketing year, Colombian coffee production is estimated to reach 14.3 million bags (of 60kg) as the flowering period in the main coffee regions benefited from a favourable climate. Exports for the same period are expected to hit 13.3 million bags.

By the middle of the month the harvest in the higher altitude areas had wound up and the majority of cherry had been delivered to dry mills: crop volumes therefore had been registered with Icafe. The main headline is that Costa Rica recorded the lowest ever harvest, reaching a total of 1,714.762 fanegas (fanegas are units of 46kg), 100,000 less than the initial Icafe forecast. Lower yields due to unfavourable weather conditions has been touted as the main driver of this drop in production. Because of the low NYC and tight supply, most coffee was sold on an outright basis.

Tarrazu, the largest growing region, posted a good year. Renovation at the farm level, good access to credit for producers, favourable weather conditions and more young people taking over family farms all helped this region grow and contribute 43% to the total crop volume. This stands in stark contrast to the other big regions: West Valley and Central Valley. The West Valley was hit by prolonged periods of drought and this is ongoing, which is a worry for the next crop. It was a different story in Central Valley. Land has come under huge pressure from real estate developers and many farmers have sold up and left coffee. Lack of interest from the next generation of coffee producers and issues with La Roya paint a sorry picture in this growing region.

What about the future? Icafe is investigating how to improve access to credit for farmers who lack the funds to renovate, and it also plans to increase the provision of research and training they offer. The rainy season has begun and most areas report good flowering. Let’s hope for a better crop in 2019/20.

Colombian coffee production is estimated to increase to 14.3 million bags in the 2018/19 marketing year (October-18 through to September-19) and maintain the same level in MY 2019/20. The low intensity of El Niño increased flowering and this is one of the key drivers of these positive production figures. The age and maturity of the plants are helping too, with many plants reaching the productive peak in their life cycle. The seeds of this drive were sown in 2012 and the average age of coffee trees has been reduced from 15 years in 2012 to 7 years in 2019. Exports are estimated to increase to 13.3 million bags in the 2018/19 marketing year, with no changes in MY 2019/20. This will result in 93% of production exported, with just over 40% of this going to the USA. Colombia, unlike many origins, also imports green coffee, and the main origins it sources from for its internal market are Peru, Honduras, Ecuador & Brazil.

The production figures are all positive, but growers have suffered because of the low NY price: producing coffee is unprofitable in this price climate. The Colombian President, Ivan Duque, has approved an additional 100.000 million of pesos (23.46 million GBP) in subsidies for 540,000 families that depend on coffee farms.  Total subsidies up until now are at 255 million pesos (59.82 million GBP).

During May the Colombian Peso devalued 3% against the US dollar. Although this might present more opportunities for exporters, over the long run this drives up cost of production for farmers. Most agricultural inputs are not produced in Colombia and are imported, which means a weaker Peso drives up the cost of these essential inputs.

At Las Margaritas Farm and Potosi farm in Caicedonia, Valle del Cauca, the peak of the harvest has just finished. The owners, Café Granja La Esperanza, told us both farms have produced around 815 sacks which include the classic regional cultivars plus a few of the more exotic ones that have brought them international acclaim. This represents a 30% increase in production on last year. In Trujillo, where we source from the famous Cerro Azul farm, the upcoming harvest in September is expected to produce top notch quality. Quantity is down due to serious renovation carried out over the last 18 months.

This month we heard from Dawit Degu, of Degusons Trading Company in Addis Ababa.

Exporters and suppliers in the interior are holding back stocks in anticipation of higher prices. Although the New York is very low, prices traded at the Ethiopia Commodity Exchange (ECX) remain high. This has slowed down export business as there is a big gap between price ideas of importers and what exporters can currently offer. Problems regarding foreign exchange persist, and this has exacerbated the ‘Djimma 5’ issue we touched on in our June 2018 report. The number of export licences for coffee, sesame, and other pulses has soared, with Ethiopian importers desperate for US Dollars to fund their import business. Lower grade natural coffee is reportedly sold at a loss of up to 20% in a bid to increase Dollar reserves. This is certainly one of the biggest market distortions in the coffee industry. One of the results is a widening balance of trade deficit and inflation. Domestic consumption in Ethiopia continues to grow and often can be a more lucrative outlet than the export market. This has not gone unnoticed internationally.

Chinese Foreign Direct Investment (FDI) continues to flow into Ethiopia. Hujian Group, a Chinese company, has signed a memorandum of understanding with the Ethiopian Investment Commission (EIC). The Commissioner of the EIC, Abebe Abebayehu said they are “developing about 40 hectares of land to build coffee processing companies. We will also expand widely coffee processing companies in the area in the future as coffee is abundant around Djimma.” – The Reporter

More investment is needed in the energy sector. There have been intermittent power cuts which has interrupted dry milling and therefore caused a backlog of FOB shipments. This will impact some contracts by up to 7 weeks because of the backlog. According to the Ethiopian Electric Power Authority, the power shortage is due to scarce water reserves in the dams, particularly the Gibe – III dam. The power interruptions have affected most industries in Ethiopia. Coffee processing plants are now facing long queues and unable to operate at full capacity.  Steel companies are forced to stop operations as the furnaces require large amounts of uninterrupted electricity to reach optimal temperature.

In the Ethiopian calendar “Genbot” (May -June) is the hottest month of the year and it is now coming to an end. It is followed by the rainy season Keremt, which will begin from the month of Hamle (June-July) and continue up to Meskerem (September).