March saw us officially move into spring! Whether you define spring astronomically or meteorologically, the effects were observed, with cherry blossom and daffodils out in bloom across the UK. Wales won the Six Nations and Man City are the team to beat in the Premier League. Politicians, true to form, muddled on through with Brexit, and we still don’t know when, or if, we will officially leave the European Union. In this report we analyse the usual indicators, and head to Colombia, Costa Rica & Myanmar to find out the latest news there. 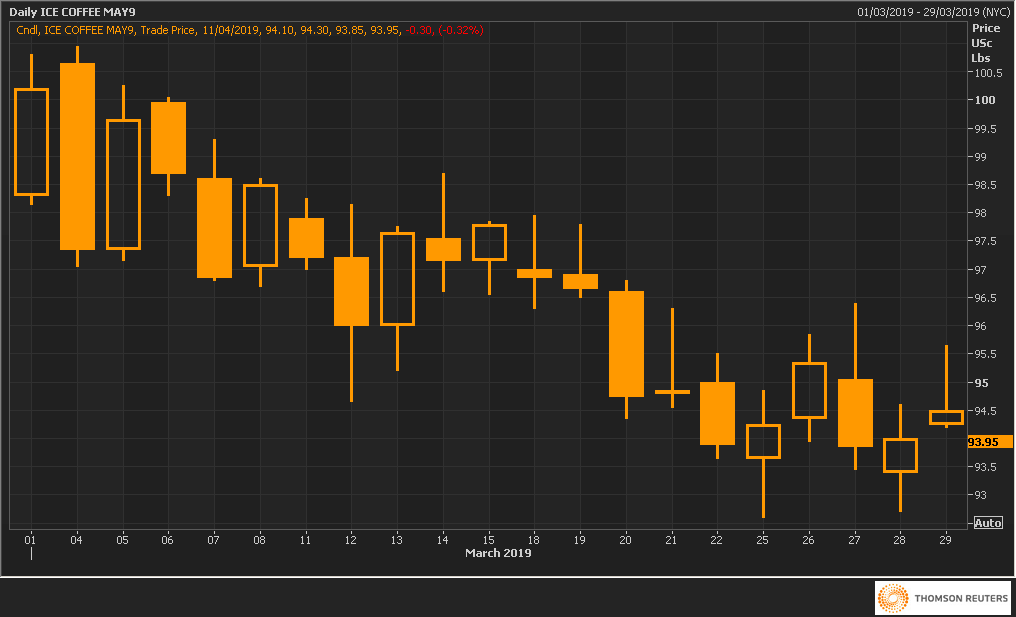 The bearish trend that we saw in February continued throughout March and the market closed 5.7 c/lb lower than the opening day’s close, at 94.50 c/lb. The month hit its high early on, hitting a level of 100.95 c/lb on the 4th. It then lost value the following 7 days before a brief resurgence towards the middle of the month. This was not to last however, and the market continued to slide, hitting a month low of 92.60 c/lb on the 25th of March.

Pound Sterling started March stronger against the Euro (purple line) and weaker against the US Dollar (orange line), compared to the beginning of February. February’s trend for both currency pairs was similar and quite gradual. March, as you can see below, saw quicker and greater movements, with March 12th, 21st and 27th all seeing significant moves during the relevant 24-hour periods. Brexit continued to dominate the GBP/EUR currency narrative. There was concern that the US economy showed signs of stuttering as the tax cuts enacted by Trump early on during his administration are close to expiring. Much debate on the true value of the US Dollar ensued as a result. 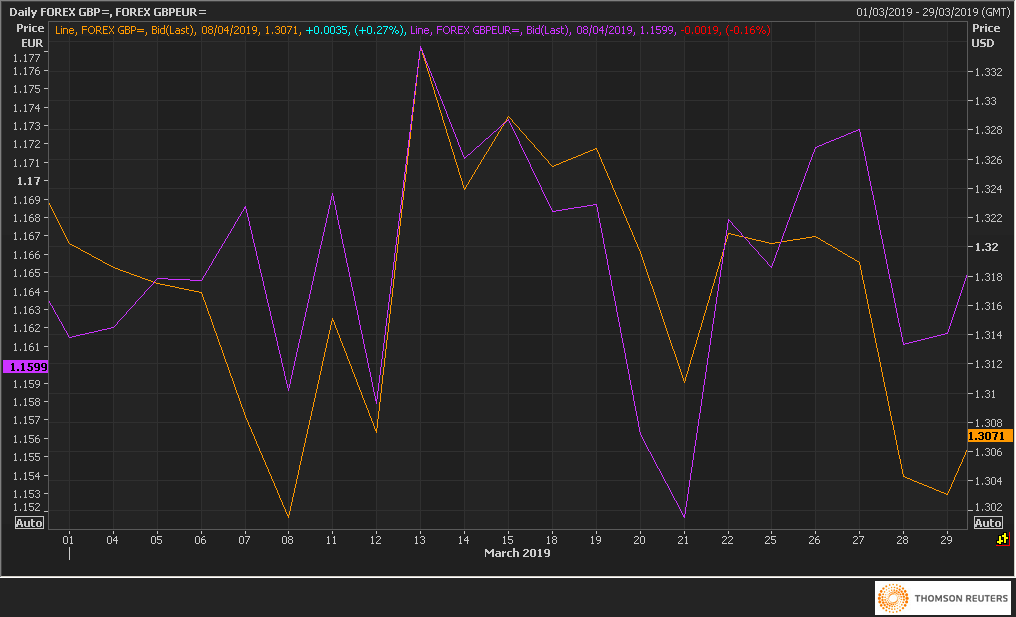 Differentials for current crop in Brazil tightened. Many buyers were waiting for these levels to ease due to the view that there is still a great deal of unsold inventory. In the last week of the month, the Brazilian Real touched the level of 4 Reals to 1 US$.

The Colombian government announced it would give an additional 60 billion pesos ($19.4 million) in aid to coffee farmers who are struggling with the low coffee market price. More than half a million Colombian families earn their living from coffee.

Vietnam’s production is estimated at 29.5 million bags for the 2018/19 crop. This represents a 3.4% decrease on the previous crop and is mainly down to lower than expected yields. This represents a trend in the key producers in the Asia-Pacific region, with Indonesia also estimated to be down by up to 5% on last year.

Towards the end of the month, it was anticipated the fly crop would start in the middle of April. We expect production to be 3% lower than that of 2018. Quality keeps on improving in the southern regions of Nariño Cauca, Huila and Tolima. There was still blockades on the Pan-American highway at the end of the month that connects Cauca and Nariño with the centre of the country and both the ports of Buenaventura and Cartagena. This caused gridlock in some of the busier parts of the highway and provided challenges to producers and exporters alike. It has impacted March and April FOB shipments and we hope that by May the situation will have settled.

Coffee blooms during the first quarter of the year have been good and the climate has been favourable for the formation of cherries that will emerge for the main harvest. However, with the low coffee price, there are concerns that farmers are not applying fertilisers and looking after their farms, which does not bode well for the quality of the upcoming main crop.

A few months ago, the Colombian Coffee Federation/ Federación Nacional de Cafeteros (FNC) mentioned they were exploring the possibility of not using the NYC market to sell coffee, in a bid to sell above the cost of production. However, after research and consultations with foreign buyers, it was decided this is not a good idea as it might price Colombian coffee growers out of the market and force buyers to switch to alternatives that still use the NYC to price coffee.

In our January Market report, we predicted a drop in production for the 2018/19 harvest, and this was confirmed by the latest data released by Icafe, The Costa Rican Institute of Coffee. The gap between this year’s deliveries, compared to last year’s, is stark. 2016/17 was the lowest crop recorded in Costa Rica and if the current trend continues, it is likely that 2018/19 will break that record.

Icafe’s analysis shows that the 4 main coffee producing regions are all down on last year: Perez Zeledon (-0.6%); Tarrazu (-9.3%); Central Valley (-24.8%) & West Valley (-24.8%). They also show that the only producing region that is showing an increase compared to this time last year is Turrialba. However, given that Turrialba only produced just over 5% of last year’s crop, this is not that impactful.

Although volume is down, the quality of this crop is very good – both with regard to solid commercial coffee and the fancier microlots. Good prices are fetched for the top lots and most of the coffee that was offered in March was on an outright basis. With the low NYC, many exporters just don’t want to sell on a differential. Just over 2/3 of the crop has already been sold, and we don’t see a change in this trend of selling on an outright basis for the rest of this crop.

This month, Amy VanNocker from Mandalay Coffee Group (MCG), updates us on the latest developments out in Myanmar.

The transition from March to April marks the transition from Myanmar’s dry cool season into the wet hot season. Scattered rains are arriving, the Padauk flowers (Pterocarpus macrocarpus) are starting to bloom, and soon the country will shut down for a 10-day New Year’s Water Festival (သင်္ကြန် “Thingyan”). Most coffee producers in Myanmar finished harvest in mid-March, with the latest continuing through the first week of April. Those late harvests combined with the long national holiday are the reasons why it’s unusual to see shipments ready for export before May. The rains should last through October, with a bit of a break before the cool and dry coffee harvest begins again in December.

It is consistently difficult to find complete and accurate statistics on production and sales, but most producing regions are reporting significant reductions in yield for the 2018/19 season, typically around 30% less when compared to last season. This is due to the typical biennial slump combined with unseasonable rain and winds that disrupted flowering and fruit set early in the season. While some farms in Naung Cho and Mogok saw slight increases in yield, the general trend was negative.

Despite the challenges of weather, this year’s quality has been equal to or better than in previous years. This could be in part due to the local industry’s constant professionalization and skill-building. During this past season, more than 80 people enrolled in Processing courses led by the Coffee Quality Institute, with support from USAID-funded Winrock International. DRWakefield’s exporting partner, Mandalay Coffee Group, was honoured to host the first Professional level course in the country, with another held for smallholders in Ywangan and two General Level courses in Yangon for beginning processors, roasters, and baristas. In the recently-held 5th Annual National Cupping Competition, international judges awarded the top prizes in each category to Mandalay Coffee Group (Washed, 87.17), Bant Sawk – Hopong (Dry Natural, 89.25), and Behind the Leaf (Other processes, 87.75).

On a national level, the local currency (Myanmar Kyat) has seen substantial weakening against the USD in the past year (1:1330 in April 2018, 1:1510 in April 2019). While that scenario is technically favourable for exports like coffee, the increased volatility and speculation has many businesses feeling uneasy. The Myanmar Coffee Association, the nation’s non-profit tasked with “creating pathways to prosperity for the industry,” recently elected new leadership during their annual general meeting, including the new Chairman, Mr. Myo Aye of Yangon. Finally, the country is still struggling with the crisis in Rakhine state, and building up civil society and government branches to support sustainable development in the midst of rapid growth.

Our first arrival from Myanmar will hit UK shores towards the end of June/early July. We’re proud to support the farmers we’re working with and look forward to hearing your feedback on these coffees. You can find out more from our trip there last year here. Thanks to Amy for updating us on the crop. Till next time!