Empty streets, cafés, shops and restaurants have become the norm. After such a long time adapting to this reality, it feels almost strange to notice them slowly fill up again and seeing life flourish. Even though our industry is recovering, uncertainty in the mid to long term still looms over us, and this is reflected in the lack of forward buying by roasters, especially with regard to higher scoring lots.

Polemical leaders in Brazil and the US were criticized for their response to Covid-19 and now those economies are suffering as a result of their choices. How do origin countries without big buffers deal with quickly weakening economies? How are people with less means supposed to choose between following the rules and getting by? At origin we hear people are struggling to finance their operations and they’re also finding it increasingly difficult to gather enough skilled pickers to harvest what needs to be picked. Across Central America, many countries often import pickers from their neighbours. This harvest cooperatives are forced to rely on local pickers, who are often less skilled and up to 5 times slower.

President Trump is constantly talking about his trade deal with China and contradictory comments from his advisors are stoking more uncertainty. The signature in January paused the trade war between the world’s largest economies. Let’s hope the peace stays so everyone can work together to recover from this economic downturn.

Back to coffee though. This month we explore India, El Salvador and Peru. 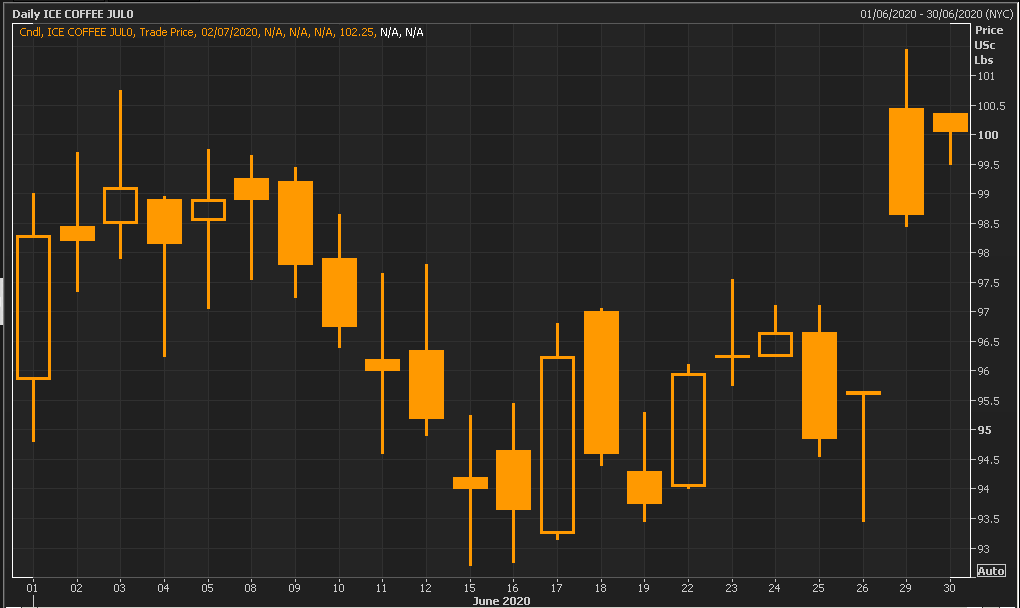 On the 8th of June we saw the start of a sustained downtrend which hit an 8-month low of 93.65 c/lb on 16th June. Weather concerns such as frost forecasts in southern Parana and rains in Minas Gerais supported a steep climb to reach 100.05 on the 30th June.

The COT reports showed that over $1 billion worth of futures had been sold in June by speculators. From the graph above we can see the market then responded by increasing by 10 cents from 15th June to 30th June. There’s been a consistent flow of commercial (roaster) buying, although in general liquidity and volume’s on the low side.

In June the certified stocks reduced for the 5th consecutive month in a row to 1.6 million bags (30th June), over 90% of which is stored in EU ports. There’s an inverse relationship between certified arabica stocks and future prices and at some point it’s likely the continued drawdown could trigger an uptrend in the NYC.

Going forward we hope that coffee will see continued support, as the supply of deliverable mild washed arabica tightens amid production uncertainty. Let’s not forget that although over the past 25 years global production of coffee went from 100 million bags to 170 million bags; 85% of this increase was from natural processed coffees and Robustas. This means that washed coffees (such as milds), are not factored in representatively. 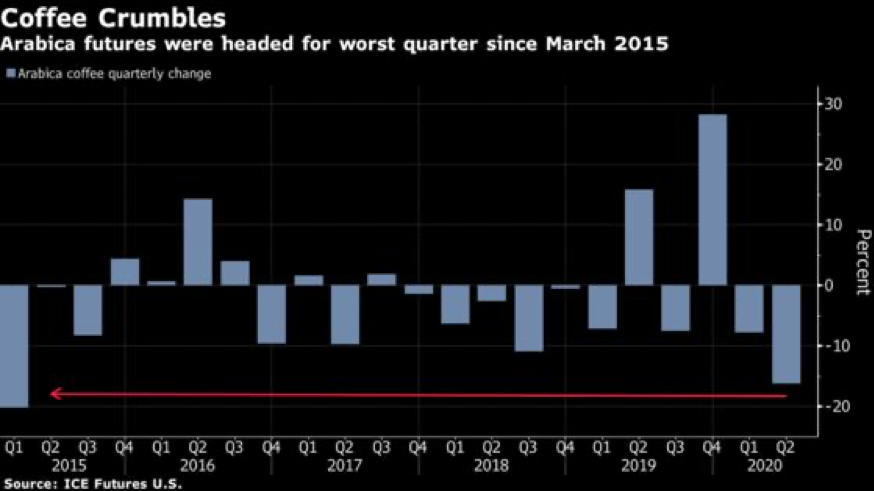 With much of the current crop Robusta within Vietnam sold, the internal market prices are firm with reluctance by farmers to sell off the remaining stocks in hand. With the lower futures value in London, trade is expected to remain slow in Vietnam. The Indonesian government data from Sumatra, which is the leading coffee producing island within Indonesia, has reported that the island’s Robusta coffee exports for the month of June were 88,615 bags or 60.04% lower than the same month last year.

The USDA sees a decrease in production in Vietnam and Indonesia due to poor rainfall levels during the early stages of cherry development.

In the London market, the first week of June saw a sharp rise from $1178/mt to reach a month high of $1263/mt. It then ended June at $1187/mt, far below acceptable levels to induce any physical selling interest. 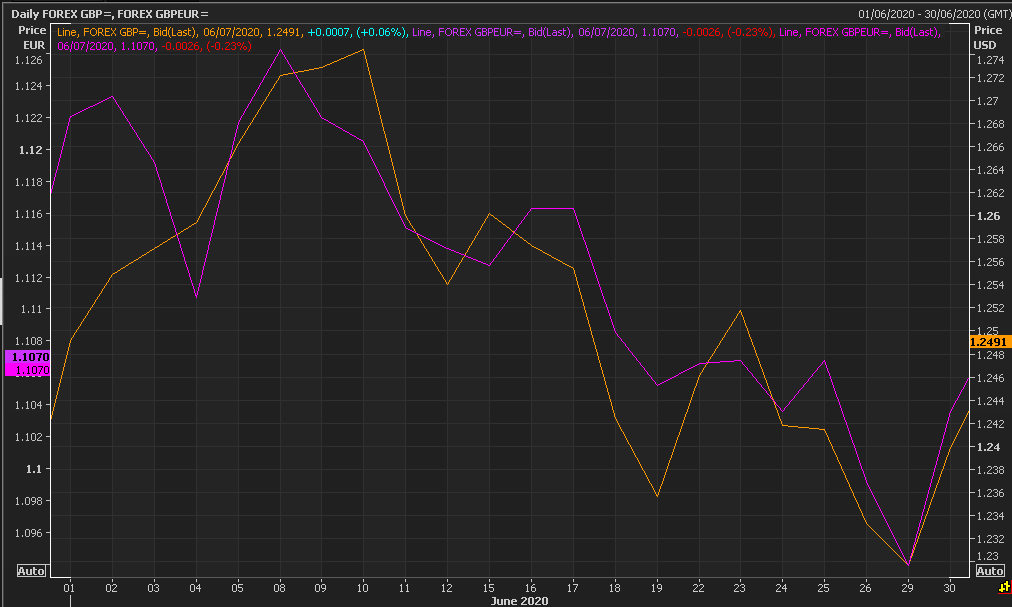 GBP/USD started the month at a modest 1.242. It initially rose steadily against the dollar to mark a three month high at 1.274 on the 10th due to investors’ optimism at the reopening of non-essential businesses in the UK. However, fears over Brexit talks and a drop in the stock markets caused a sharp fall to 1.254 by the 12th.

Rallying slightly over the next couple of days it then fell further to 1.236 after data showed the UK economy contracted by 20.4% during April and the Bank of England’s decision to continue its plan of quantitative easing. Once again, we saw it rise and make some gains briefly but Brexit concerns and apprehension of a second wave of Covid-19 pushed the Pound down to reach its month low of 1.230 on the 29th. It finished the month on a somewhat positive note climbing up to 1.243.

Like the cable, the Pound saw an initial rise against the Euro at the start of the month, but not as sustained. Only climbing from 1.117 to 1.123, it then tracked down past the month opening level to 1.11 on the 4th, as confidence lessened amongst Brexit talks. The Euro also strengthened as the European Central Bank announced an addition and extension to its asset purchase programme. Despite the lack of progress with Brexit discussions the Pound surged to its highest point of June of 1.126 on the 8th.

Over the remaining days of June, it dropped, with some brief periods of resurgence, to hit its lowest value of 1.094 on the 29th, the same day as the £/$’s lowest point. A combination of falling stock markets, the release of UK economy statistics and Coronavirus fears all played a part in the fall.

Many speculators sold Latin American currencies on fears of a second wave of Covid-19 in the region.

USDA reported a Brazil 2020/21 crop (July-June) at a record 67.9 million bags. Despite a concerning increase in Covid-19 numbers and fears over delays at farms and ports, so far it seems the necessary preparations have been made. Internal consumption remains stable (23 million bags) and export is supposed to climb 12% y/y to 37 million bags (and 4 million bags soluble). 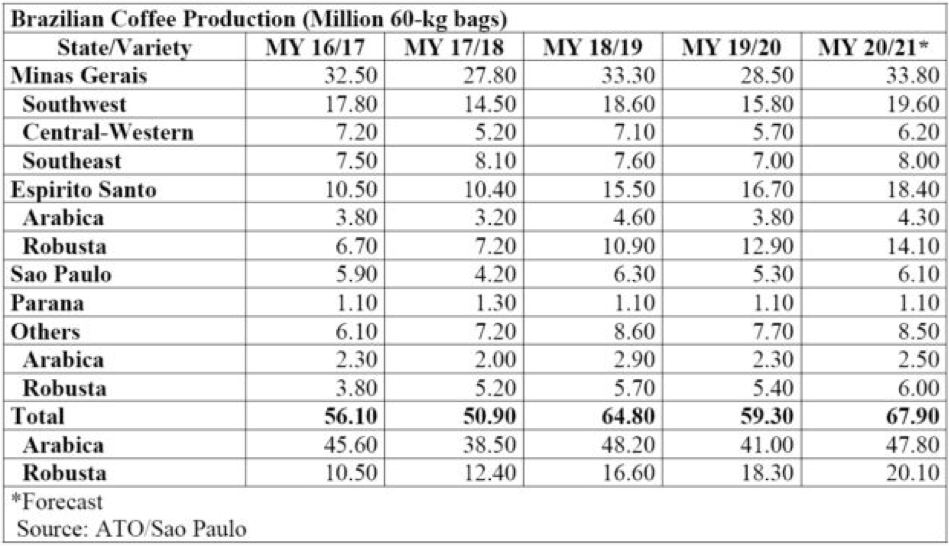 It’s worth noting that the USDA are rather notorious for erring on the high side. By way of comparison; IBGE (Brazilian institute of geography and statistics) forecasts a ‘mere’ 57.3 million bags (10.6 million bags lower…). Better yields due to the ON-year cycle are expected at a record 32 bags/hectare average (vs 29 bags/hectare in the OFF-year cycle 2019/20). About one third of the crop is already sold by growers taking advantage of the extreme weak currency. International buyers in Europe are requesting shipment delays of up to 90 days as their storage facilities fill up.

In Colombia coffee is a driving force of the country’s economy and in many cases the only livelihood of Colombian families. So far, this coffee year (oct’19-June-20) production rose 4% and exports are down 6%. The main harvest starts in September.

Honduras has grown very fast over the last decade and we are seeing overproduction and difficulties in maintaining quality, particularly with regard to correct picking and milling (preparation) practices for commodity grades. Exports in June were 30% lower than last year at 651,746 bags.

Coffee harvesting had nearly wound up by the time nationwide lockdown was announced on the 24th March.

About 5% of the harvest could not be picked due to problems at farm, milling and port levels.

Late rainfall at the end of March resulted in a further 10% flowering loss. The monsoon rains are supposed to come down from June to September. As we saw in our January trip report, rainfall is becoming more irregular with more stem rot and berry borer attacks as a result.

India produces 300,000 MT on average, two thirds of which are Robusta and one third Arabica. Robusta has reported only a limited loss of 5%, but Arabica was reduced by up to 30%, resulting in very high prices. By September there will be a clearer view on the new crop, but the future looks much better with good coffee development and water in the tanks replenished that can be used for much needed irrigation.

On the demand side there’s a forecasted global drop of 12% expected. Demand for Robusta parchment, traditionally going largely to the Middle East and Africa, has dropped as much as 25%.

Overall, there’s less liquidity in the market, causing some issues for growers who are faced with less money for investment of fertilizers and labour. Where we saw in Peru that the government is supporting coffee farmers with loans, India has not yet released much credit to exporters or farmers.

There’s strong demand for Robusta Cherry AA and less for Cherry AB and washed Robustas. These washed Robustas remain a niche in the market (only 20% of Robustas in Indian are washed).

Currency-wise, the Rupee has devalued against the dollar from 1.70 at the beginning of the year to 1.76 at the end of June. This helps, but is not significant enough to help stimulate export as much as we are seeing in Brazil. Moreover, there are cases where exporters have to rebook their dollars and pay fines to the bank, since their planned exports could not be shipped.

Port disruptions have delayed, and disrupted coffee outflow. However in June, operations were as good as back to normal.

The harvest period in El Salvador runs from October to April meaning some of the crop avoided the difficulties induced by Covid-19. Although El Salvador so far has not been as severely affected by the Virus as some of its Latin America coffee producing counter parts, producers and millers are working at a reduced capacity since there is no public transport to mobilize the workers, causing extra expenses. On the plus side, local ports have been operating which has permitted the flow of coffee exports out of the country to continue, although at a reduced level. With the new arrivals set to land in August there is uncertainty around how the industry will move forward from the Covid-19 crisis once the situation settles down.

Heavy rainfall hit at the start of June from Storms Amanada and Christopher, with some areas receiving over 600% of the average rainfall for this period, causing more than 1000 families to be displaced. However, high levels of rainfall does bode well next year’s crop.

It is estimated that the crop is 15-20% down compared with last year but there is speculation that stocks remain at origin due to contract cancellations and selling difficulties. Internal prices have been low but on the whole differentials are holding strong on milds.

Peru is still amid the 20/21 harvest with all its low altitude coffee harvested and 50% sold. Reports indicate that volume is 20% lower than in the same period last year. However, only 10% of high-altitude coffee has been harvested, giving potential for this figure to improve. Producers are content with the quality so far but heavy rains in certain areas could lead to delays in drying.

Despite being one of the first to lock down, Peru has seen its economy shrink by 40% and has the second highest number of Covid-19 cases in South America. The country’s State of Emergency has been extended to 31st July 20. One of the main challenges the origin is facing currently is how to continue the normal flow of coffee from farms to the Cooperatives’ warehouses. A new source of labour that has become available to larger farms (over 5 hectares) is the arrival of people returning to their home towns after being made unemployed in the Capital, Lima. Nevertheless, this has also caused a spike in the number of cases in rural towns.

Internal pricing remains high and many exporters are short. Export differentials are also high as demand, driven by many UTZ and RFA buyers who could not get enough of this quality from Honduras, continues to outpace supply. Although the market is flirting around 1 US Dollar, the differentials remain firm, which has helped Peruvian producers during these tough times. 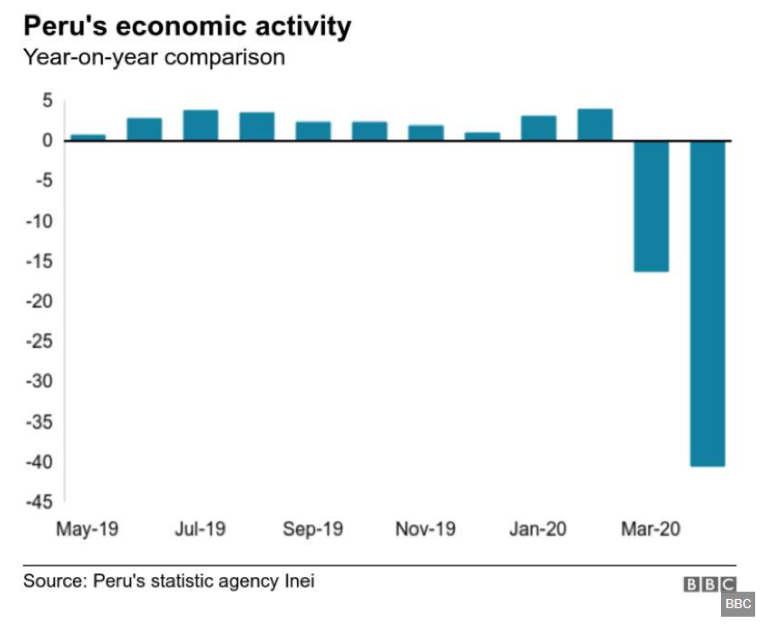 Till next time coffee folks!