In June we saw the UK women soccer squad light up the world cup in style reaching the semi-finals. We heard a fanfare about the Brazilian political situation and the drum rolls have started for its new crop coffee outlook. On 28th June the European Union and Mercosur – (Argentina, Brazil, Paraguay and Uruguay), reached an agreement on an ambitious and comprehensive trade agreement that plans to increase export with 100 billion reais per year (26.3 bn USD).

Big inter-continental negotiations seem to be the trend lately with Donald and Xi meeting on 29th June to put their tariffs in the fridge for the time-being. All on the side lines of a global G20 summit meeting in Japan.

We will take a closer look at what’s going on coffee-wise in Brazil, Peru and Indonesia in our ‘origin focus’ section. 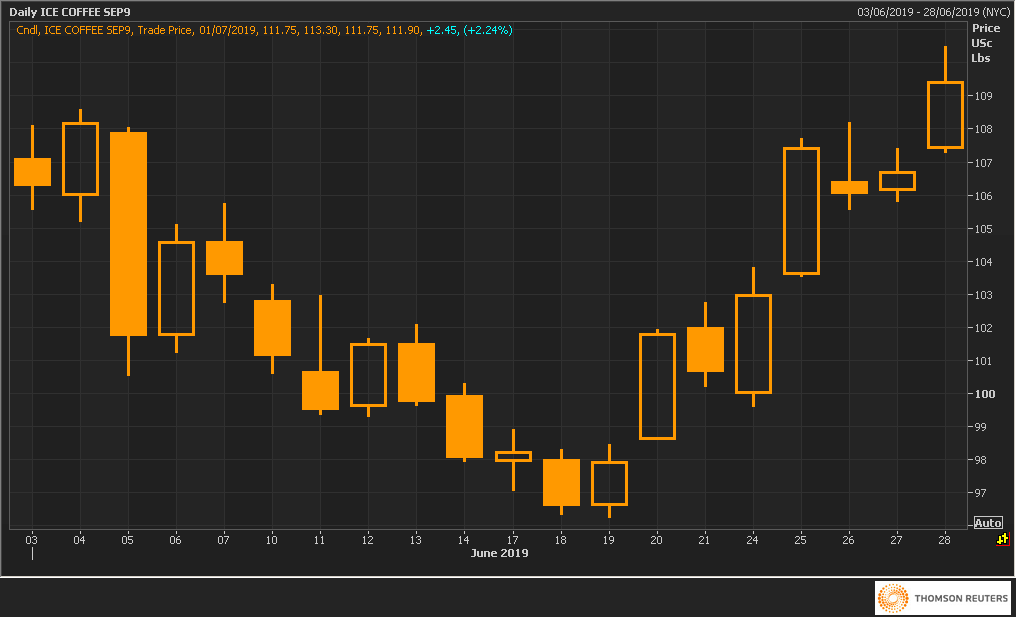 After the upward trend that began in May, the June terminal began bearish to drop to a low of 96.25 on 19th June. After that, the rally continued and then ended on last trading day 28th June again at a high of 110.5.

As can be seen from the chart above, volatility remained high with some large intra-day spreads of up to 5 cents. Participants were watching the Federal Reserve bank of the states (FED) cutting their interest rates (or not) as trade wars dragged on. The investment funds started some serious short covering, as could be seen from the sharp fall of the open interest, causing markets to move up further.

On the other side, origins (exporters) and some proprietary desks were the main sellers of futures to hedge their forward contracted export volumes. These volumes are well aligned to the improved flow of coffees seen around (both carry-over from 2018/19 crop as well as new crop 2019/20 crop volumes sold in forward contracts). Many believe that the industrial roasters still have a lot of buying to do for the second half of the year, but with the origins being more expensive (on a differential) than usual, especially for the commercial grades, the strategy of buying from hand to mouth is likely to continue for now.

Other big drivers for the NYC to rally were related to a stronger Brazilian real currency (after political discussion on approval of a new pension scheme and other major social cuts in the pipeline). Some hyped up weather news as well, implying that frosts were about to hit major coffee area’s in South Minas and Paraná. So far, the impact of these cold fronts was only local. If it would limit volume output, it will be for the 2020/21 crop and for about 2-3% max so not significant yet. We will continue to monitor the situation.

On 3rd June Donald Trump paid a visit to the UK and said he is committed to “phenomenal trade deals” between the US and the UK with “tremendous potential” for the whole country “like 3 times more than what’s being done now”.

It’s a rather bumpy road for sterling; after a 5-month low on 31st May of 1.2557 it opened June at 1.2626. Ups and downs were mostly due to speculations for Mr. Johnson losing and gaining ground for the Conservative party leadership race. When reports showed that a number of party MP’s would be prepared to bring down government rather than accept a ‘no-deal’ Brexit it firmed up again on 17th June, advancing to 1.2760 on 21st June and ending the month at 1.2638. 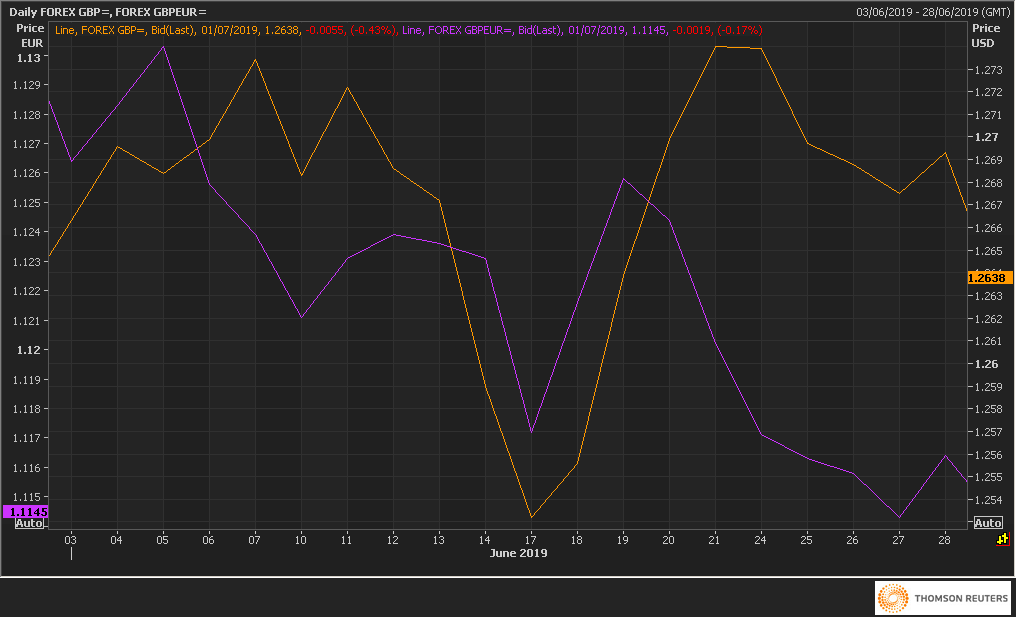 Brazil coffee exports were breaking all records with 40 million bags likely to be surpassed for the period July18 to July19.

Colombia is in between crops. Some delays in the south Huila and Nariño departments. Cauca is just starting up.  Export estimates for the 2018/19 crop total 13.2 million bags. Colombia came up with some new rules, trying to limit imports of coffee from its neighbouring countries in Central America. The low grades (100+ secondary defects), which account for about 900,000 bags, for a while were exported to countries like Germany and Italy, but soon will be prohibited again for export, and used for local (soluble) consumption.

Vietnam production for 2018-19 is estimated at 1800k metric tonnes. Plenty of rain was observed throughout June, though some water reservoirs still need refilling. Farmers have sold 80% of their crop so far. Most of it is in the hands of middlemen and exporters. The remaining carryover from last crop (350k metric tonnes) is shrinking fast as farmers are not willing to release their coffees against a still low market.

Brazil is flirting with recession. Drastic measures are about to be taken by parliament, like its long debated new pension reform plan. The minimum age for pensioners is supposed to be increased to 65 for men and 62 for women. (for a long time you could receive a decent pension on your 50th birthday)

Brazilian winter is kicking in and some concerns were raised about cold fronts approaching Paraná and South Minas Gerais. However, as mentioned above, in the majority of the coffee producing areas there’s no real risk at hand and trees are not likely to be suffering.

So tudo bem? Not really… On our recent trip to Brazil, we saw that other than the usual two flowerings a year, on some farms this went up to 10!*. We saw many stressed trees (trees not having received enough water) because even irrigated farms with their own water supply are hesitant to water their trees because of fears for yet more flowerings.

*The whole situation began in 2018 when significant droughts made the plants release more ethylene, the growth hormone in fruits. As a result, the process of forming flower gems started before it should. Then it rained in August, which made the gems “wake up” and started blossoming early. After the August rains, more sequences of rains and month-long dry periods caused multiple flowerings instead of the normal one or two. Consequently, cherries started their development journeys at different points in time and ripened in different time frames.

When a coffee tree senses enough water, it produces (or awakens) a phenolic compound to grow buds, flowers, and produce the next bean. When the tree is already carrying a lot of beans while flowering, this phenol enters not only into the flower where it’s meant to go but could also end up in the beans.

In short: flowering at the same time as cherry ripening is risky.

From a practical and economical point of view; with such irregular maturation, the pickers (mechanical- and/or hand pickers) will have to go back a second and sometimes even a third time to get the cherries. This doesn’t come for free and so we might see some of these additional labour costs reflected in the price for new crop.

In general, the quality concerns are highest for the lower grade coffees. The defect count seen was higher than usual. Where normally you would see a 40-count defect, this year we could spot 80-100 defects. Luckily, for the bigger and advanced farms like our partner Daterra, selective picking and a smart sorting system allow consistency of quality in their menu.

Coffee is the Peruvian no.1 agricultural product of export and they are the 7th biggest exporter worldwide with 425,416 hectares in use. The north accounts for the biggest part (43%) with the departments Piura, Cajamarca, Amazonas and San Martin. Central Peru has 33% with Junín, Pasco and Huánuco. In the south (24%) it’s Apurímac, Ayacucho, Cusco and Puno.

The majority of this is from smallholders: 95% of the 223.482 coffee families farm on 5 ha or less. Today 25% is exported through farmer group organizations (coops) and 75% through exporters. After Mexico, Peru is the second biggest organic coffee producer worldwide and it has a 25% share of the (niche) Fairtrade market.

In the Macro Political/Social arena, Peru is surpassing a political crisis during the last 24 months, with many past presidents and politicians being prosecuted for corruption charges. Harvest is advancing at a good pace, mainly from the central zone. The north is starting to receive the higher grown grade 1 coffees.

4.6 million bags is the provision for this year’s coffee production (June – October). Normally it’s from April, but there was a delay due to an excess of rain. Since the old crop is all gone, it’s only fresh coffees now.

A lot has been happening over past years in terms of developments and experiments in a country where basically everything you put in the ground just grows! After the 2013 roya outbreak new varieties were implemented like the more resistant Catimor. This paid off (see volume graph below). However, focus is shifting gradually from volume to quality. Next to the regular grades 1-3, we are promoting microlot specialities (SCA84+) from several high grown regions like Cajamarca. Here ‘carpas solares’ protect the coffee from excessive sun/rainfall.

For the 2019/2020 crop new areas are in production in the Central and Northern regions. (there is potential for another 2 million ha in this country) 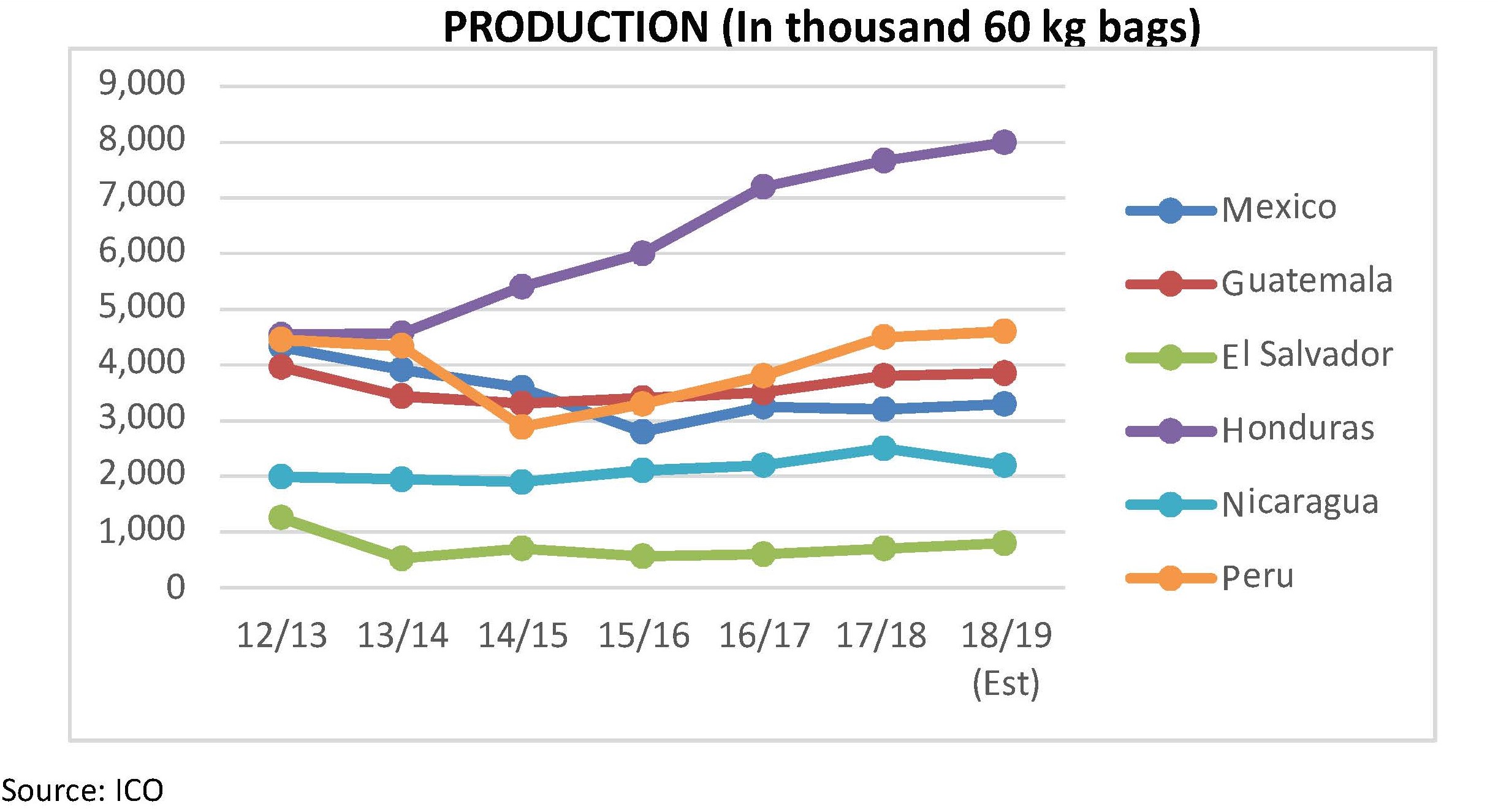 Currently, the arabica crops in Aceh and North Sumatra are finishing and we see about 10% left (from May/June picking). Quality could be inferior as the last incoming coffees show higher defect counts. Some collectors try to blend in their existing inventory with the tail-end crop, hence the cupping and the appearance is likely to be inferior. New crop will be in Oct/Nov and looking at the situation, this year’s crop is promising. Indonesia got back on its feet quickly after the ‘17/‘18 disaster. Production for Indonesia Arabica Sumatra crops is expected to total around 60,000 tons (Sep’18-Sep’19).

Robusta is currently at its peak, however most of it is purchased by local factories. Local consumption has been increasing steadily, especially for soluble. Out of 600,000 tons produced – almost 50% goes to the internal market. Next Robusta crop will be March/April. For the near future, the countries’ growing (young) population and its growing demand for quality coffee is expected to drain premium bean supply.

Price for the remaining higher qualities is on the rise until the new crop comes in around October, unless you ask a speculative collector who’s in need of funds.