July was frosty, and not just in Brazil. The inauguration of Boris Johnson as the UK’s Prime Minister provoked a mixed reaction and the response from Brussels was tepid at best.

It was not all chilly however. The crowd at Centre Court was treated to a 5-set thriller between Novak Djokovic and Roger Federer. Djokovic won his 5th Wimbledon title and now can boast 16 Grand Slam titles.

This month we look at Pound Sterling’s slide in value and head to Brazil, Mexico and Tanzania. 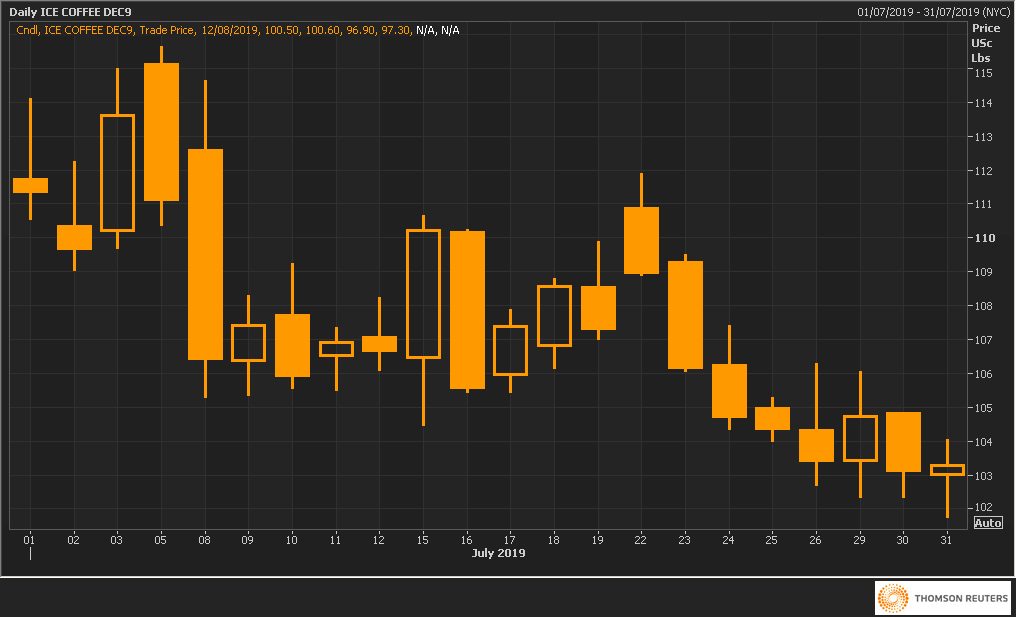 The December terminal started July trading at 111.75 c/lb and hit a high of 114.10 c/lb, before settling the day at 111.35 c/lb. The month high was on July 5th where the day high was 115.65 c/lb. The following day was the biggest day range with the market losing over 5 c/lb. This was mainly due to frost, or the lack of it. On Friday 5th July we headed into the weekend with many weather indicators pointing to a particularly brutal cold snap occurring in Brazil the weekend of 6th and 7th of July. When the market opened on the 8th and it became apparent that the impact was significantly less than expected, it fell sharply as a result.

The two yellow trend lines in the graph show July’s range for GBP/USD. The currency pair started trading July at 1.2655 and closed the month at 1.215, representing a 4% loss in value. Looking at a 6-month perspective, we can observe that Sterling gained value against the US Dollar heading into spring, and then when it became clear that a ‘no deal’ scenario was the most probable, its value tumbled. Have we found a new status quo around the 1.20 level? Many market players see a further weakening of Sterling. As a consequence, numerous UK roasters are covering out their currency position well into 2020 as a risk strategy.

And what about GBP/EUR? Well, the narrative is largely the same. However, there are less players who opine that the Euro is overvalued, in contrast to the US Dollar, where there is a sector of the market who believe the greenback is overvalued and should weaken in the medium term. As ever, Brexit and the uncertainty surrounding it continues to produce polarising opinions and predictions. 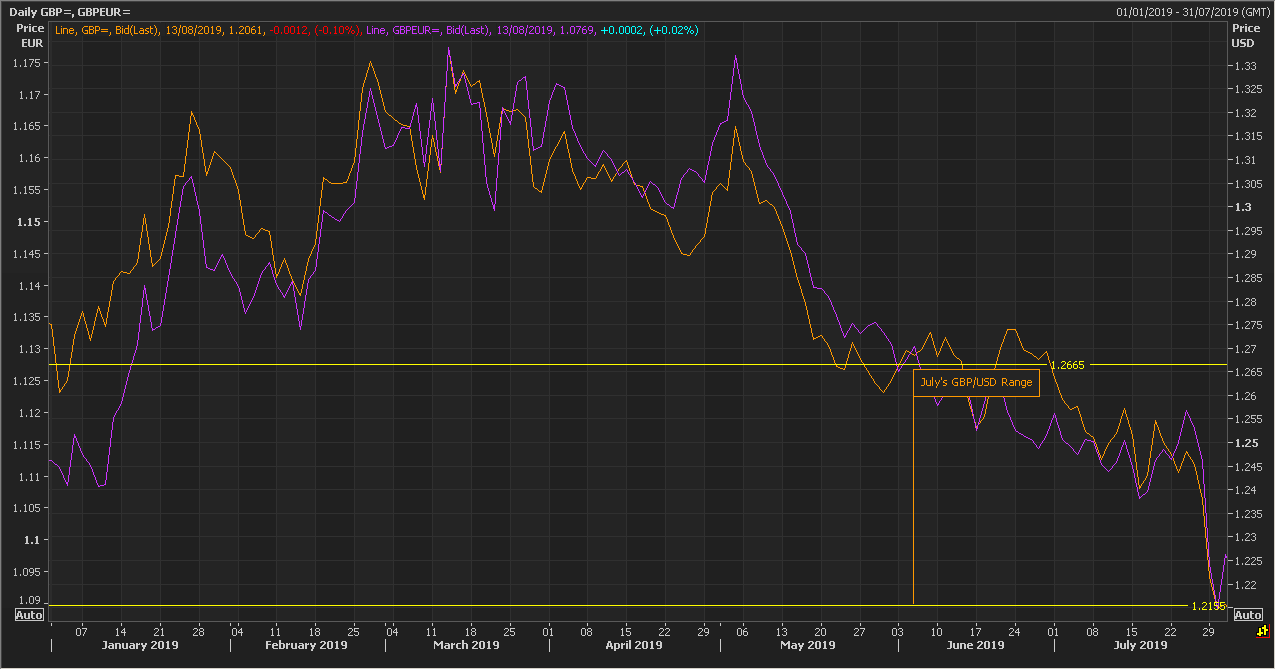 Apprehension in Brazil regarding the next crop. In some regions, we have already seen flowering, around 60 days before when we would expect to. This does not bode well and means farmers might again see another harvest with irregular maturations.

We are still in between crops in Colombia. With limited availability on offer and high demand, Excelso levels remain firm in the +30 to +35 range.

The story in Vietnam is the same. Prices have gone up and differentials remain firm.

Compared to the previous one, the 2019 harvest has presented many more challenges for producers and the primary driver of these challenges are the irregular flowerings of coffee plants which has caused an uneven maturation.

What has been the impact? Well, as per previous reports, increased picking passes have driven up production costs. Also, there will be less availability of pulped naturals this year, as drastic a drop as 50% on some farms. With fewer ripe cherries available, which are the ideal ones for pulped natural processing, producers are tending towards more natural processing.

Another impact is more cherries on the floor – average estimates point to between 20-30%. In some farms however, this could rise to 50%. When the weather is dry, these ‘ground coffees’ can be sold as ‘bebida dura’, which is considered a standard commercial coffee. However, when it rains, these coffees can only be sold as ‘rio’ or ‘riado’, the quality below bebida dura, because of the drop-in quality.

Frost is a fundamental threat that we have not had to confront as much in previous decades. As a result of that, when there was a significant frost threat in the middle of July, there was a huge furore about it and many producers, especially outside Brazil, were hoping for an upward surge in the NYC as a result. In the end, it was much ado about nothing. While there were damages from freezing temperatures, the bigger cooperatives and estates reported that they were not as detrimental to production as had been feared. When interviewed right after the frost, Lucio Dias, commercial director at Cooxupe, the biggest cooperative in Brazil, affirmed: “our main concern is regarding the too-early coffee bloom triggered by the rain that preceded the polar mass”.

Priscila Castro at the exporter SMC (an exporter we work with in South of Minas, Mogiana Paulista, Cerrado and Mantiqueira) informed us that the frost affected Brazil’s southeast; mainly the lower parts of cities with higher altitudes such as Nova Resende, Bom Jesus da Pena and Muzambinho, in South of Minas.

This harvest’s numbers will only be confirmed when all cherry has been collected and if the farmers manage to collect the ‘ground coffee’, this is going to depend on the climate and price’s behaviour.

Everyone is apprehensive, expecting more signs of the next crop. In some regions, it is already possible to sight the first flowering 60 days before the time considered regular. It is possible that coffee growers will have to face an uneven maturation once more.

This month we spoke to James Kosalos, from Grupo Terruño Nayarita, in Tepic, Nayarit. Nayarit is a state in western Mexico. It’s one of the northernmost producing areas in Mexico and where we source the delicious washed and natural patio lots from. Oft overlooked for the bigger producing states such as Chiapas and Veracruz, this terroir offers some truly unique profiles.

Towards the middle of the month, the first flowering was observed across a few of the main coffee producing regions. It was an even flowering and many agronomists remain bullish about the upcoming 2019/2020 crop. This is welcome news as many producers are still suffering from the terrible 2017/18 crop where La Roya decimated plantations and production figures were staggeringly low.

When the dust settled, many producers planted rust resistant cultivars provided by the government as an insurance against future Roya outbreaks. Next season will be the first one where these new plantations come into production. The cultivars are not only resistant to rust, but also highly productive. Therefore, we expect a big crop coming out of Mexico next year.

In Nayarit, Jim and their agronomist Fredy Flores, are working hard to preserve their heritage cultivars such as Typica, Caturra, Mundo Novo and Bourbon. These cup much better than the cultivars planted as a reaction to La Roya and using special home-made fertilisers, they believe that they can produce using these cultivars and get good yields, good cup profiles, and crops that are able to cope with La Roya. They continue to experiment with location specific organic compounds and spray the resulting ‘tinctures’ to restore the soil’s biome.

“Hapa Kazi Tu” in Swahili means ‘an inspiration for a more work oriented focus as a country’; a slogan of the current president of Tanzania Hon. Dr. John Magufuli. Since his inauguration, we’ve seen more accountability and efficiency, especially regarding government officials and government as a whole. The president has a vision and many new reforms have been implemented in various sectors to achieve this. In coffee, there was a significant coffee reform in the 2018/19 season.

The government, in a bid to change the balance of power in favour of small producers and away from multinational exporters, implemented some large changes. One of the most important was that they banned private coffee buyers purchasing at farm level, meaning all coffees had to go to auction. Since all coffees had to be sold through a coffee auction, this eliminated other models of direct export sale. Private coffee stakeholders were concerned about the reform and lobbied hard to show that they also add value in matters such as improving quality, certification issues, and production.

Eventually, the government agreed to mutually collaborate with stakeholders as long as the ambition of all was to bring more power to small holder coffee farmers who contribute 90% of the country’s production. While uncertainties remain and we are in a trial period of this new regulatory climate, it is hoped the government will positively improve Tanzania’s coffee industry. The will is certainly there.

Coffee harvesting started this month and will continue into May 2020 in some regions, although the majority of Arabica harvesting will wind up towards the end of November.  We will be receiving new crop samples soon so watch out for any communications on upcoming special coffees from this origin!