In June, there was a bearish outlook on the market but in July, we saw a bullish sentiment appear. Save the threat of the frost in Brazil and the appreciation of the Real, there are no major fundamentals driving this. The key factor is the hedge funds’ short covering, moving away from grains to soft commodities, with coffee being one of the key focuses of this drive. Overall, the market gained steadily over the month, closing on the first day of July at 127.7 c/lb and closing the month at 139.25 c/lb, representing a 9% increase.

Throughout the month, the talk of the town was whether the Bank of England (BoE) would increase the interest rate. GBP/USD finished the month around the 1.30 level with all eyes on the first week of August for the BoE meeting. In a cyclical world, rate hikes are currency supportive, but in the structural and political post-Brexit world we inhabit, many banks and consultancies thought a rate hike would be damaging. In the end, the BoE voted 6-2 in favour of keeping interest rates unchanged at 0.25% on ‘Super Thursday’.

Over the course of July, the Euro steadily gained against its major currency pairings, the Pound Sterling and the US Dollar. However, markets are waiting with anticipation for the September European Central Bank (ECB) meeting to see how this will affect Euro strength. GBP/EUR finished the month around 1.11. How long that will last is difficult to say. 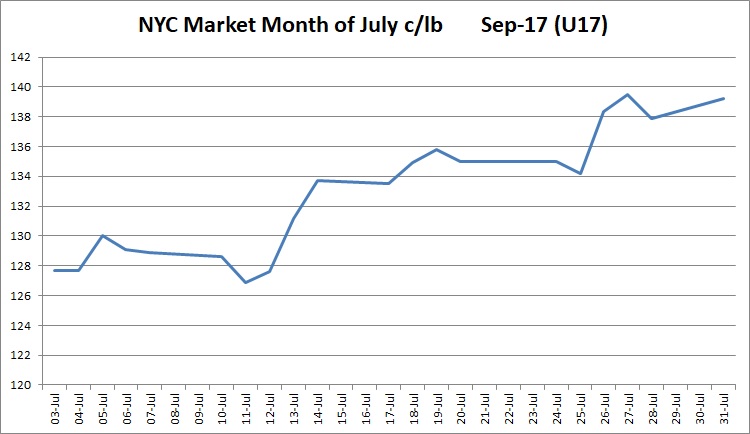 Fears of frost dominate the news in Brazil. There were a few scares during the month, however these never materialised into an actual cold front. Concerns over the availability of larger screen sizes once again mean that many exporters are reluctant to offer too much of some of the key grades (2/3 17/18 for example). Many are holding out until later in the year to offer the larger screen sizes. Depending on who you talk to, estimates for the 2018/19 crop range from 59 to 63 million bags.

As part of the Coffee Federation of Colombia’s (FNC) 90th anniversary celebration, it has launched an initiative to encourage innovation in coffee harvesting in Colombia. Called ‘CoffeepickINN’, it is an open challenge aimed at entrepreneurs and coffee companies to identify innovative proposals to add value to post-harvest processing, and to make the supply chain, from growing coffee right through to export, more efficient. The FNC has set aside resources to invest in the most successful proposals. Differentials remain high with uncertainty over the upcoming crop still apparent.

In other news, the Vietnam Coffee Association is holding the first Vietnam Coffee Day on December 10th, and a 3-day festival has been organised from 9th to 11th December in Da Lat city. Many key domestic and foreign coffee players are expected to attend.

It has been increasingly difficult to predict the weather patterns in Brazil as an ever-changing climate is fast becoming the norm, as opposed to the exception. Mitigating the risks and results that climate change is creating has become the challenge of the 21st century for farms in Brazil. Daterra Farm, as ever, is at the forefront of tackling that challenge.

In a recent update, higher temperatures and irregular rains have been cited as the main challenges of this crop. Higher temperatures result in more coffee borer beetles as they reproduce faster in hotter climates. The result is that a higher percentage than usual of ‘broca’ beans (beans with holes created by insects) are produced. At the beginning of the crop there was more rain than expected which accelerated the maturation process of some cherries. The result was an uneven maturation of cherries. Daterra mitigated this by using its UNIPAC (Intelligent Automated Coffee Processing Unit) wet mill which is able to separate cherries by their stage of ripeness to ensure a more even lot of coffee. While too much rain is damaging, not enough rain is equally damaging and Daterra is also investing in new irrigation techniques to prepare for possible droughts. The latest addition is an underground-dripping irrigation system.

This video from our partner European Coffee Trip gives a great overview of what Daterra Farm is all about:

In their June report, IHCAFE (Honduran Institute of coffee) released a special feature on Roya. Roya struck particularly hard in the 2011-2012 crop and as a result, in 2012, IHCAFE initiated a project to monitor Roya and Broca, as part of a national strategy to bring under control these dangerous threats. In that project, over 1000 fincas across the country have been monitored. Particular emphasis has been on how different varieties react to Roya and of the traditional varieties in Honduras, the graph below shows which have been affected the most by the famous rust disease. 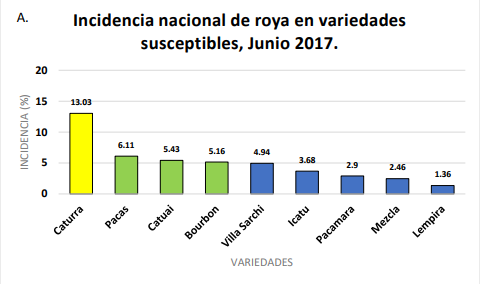 Interestingly Caturra has fared significantly worse than other varieties. The report also shows that the incidence of Roya fell from March to May, but is now back on the rise. If you go to the Ihcafe website (http://www.ihcafe.hn/) you can read more on their conclusions.

In other news, our latest container of Project 121 from Capucas and Cocafelol cooperatives have arrived safely in CWT! Project 121 started in Honduras and we’re excited to taste the new arrivals!  We also have a new coffee called ‘Fuerza La Labor’ which is a great tasting espresso coffee traceable to 6 families in Cocafelol cooperative. If you missed out on Project 121, this could be a good option!

2017 saw late and heavy rains in the Northern District that resulted in a tardier ripening of coffee cherries. Rather than a March/April harvest, it began in earnest during the middle of April.

The main harvest occurred between late April and early June, proving to be of decent volume and of high quality. A low quantity of lower grades was observed as well as a higher quantity of green beans with larger screen sizes.

Early drying days were very short with the parchment kept covered due to rain. Normally this process takes 15 days but this was extended to 25-30 days. As the season progressed this improved which increased the volumes. The 2017 harvest was about 15% up on last year and should continue to increase through September and October when the second harvest comes but will diminish through to November when the harvest will finally come to a close. This second harvest only happens in the Northern Province due to the high altitude which for Kinini (new washing station we are working with) is 2,000 – 2,500 meters.

It has been an excellent harvest at Kinini and the water supplies from the natural springs in the mountains above the washing station have been good and have provided constant supply throughout the harvest. The farmers are content with the financial return from the crop and are looking forward to receiving a good bonus at the end of this year. Kinini is a new washing station working with growers with young coffee trees and is looking forward to an even better 2018 with more volume as the productivity of the trees increases. Get in touch with the trade team to learn more about this great new coffee source!