January. The month which finally saw the UK leave the European Union. We wish that we wouldn’t have to mention Brexit anymore in our reports, but this is highly unlikely. Maybe in 2021 we’ll stop mentioning the B word?

The end of 2019 saw a dramatic rally in the coffee market and many thought that this could be a sign we were exiting the long term low price climate. Unfortunately, this was not the case. As you will see later in the report, the optimism that we finished the year with was slowly eroded by a steady downtrend over the course of the month.

The coronavirus (COVID-19) spooked the markets and it was not just coffee that lost value. You’ll find out more on that further down the report. By the end of the month there were two coronavirus cases confirmed in the UK and it looked set to be a problem that would endure for many more months. Back to coffee though. This month we head to Brazil, Costa Rica & India… 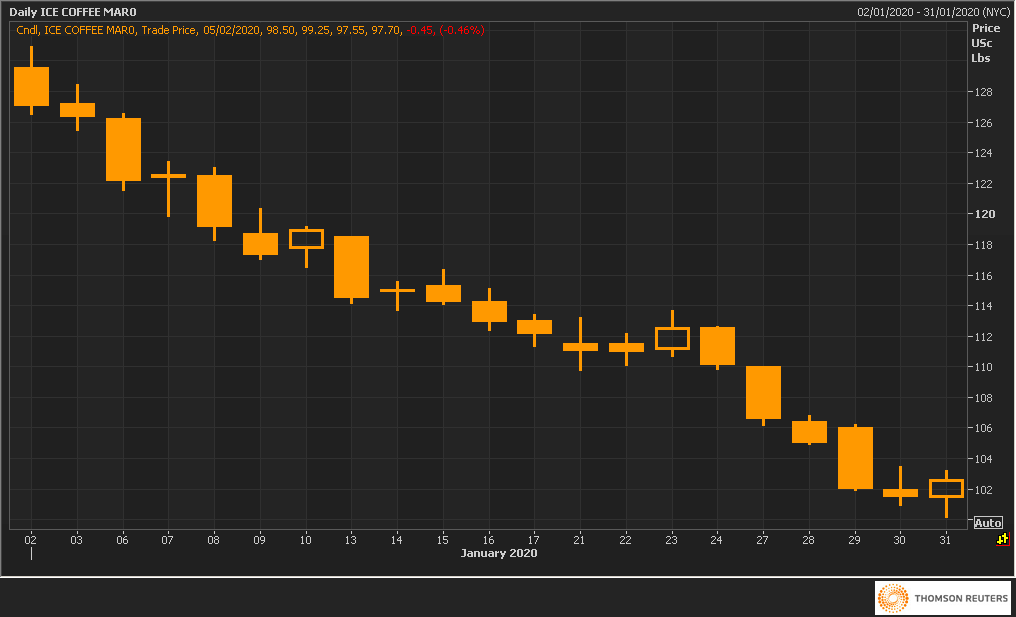 2020 opened the year trading at 129.55 c/lb, nearly 30 c/lb higher than how it began 2019, where it was hovering just above 1$. As you can see from the graph above, this was perhaps the only positive news regarding the coffee market. By the middle of the month it had dropped to 114.30 c/lb and closed the month 26.9 c/lb lower than the open, at 102.65 c/lb. This represented a decrease of 20.8% and once again called into question the long-term sustainability of the NYC.

Good rain in Brazil helped maintain the downward pressure on the market and this was aided by the depreciation of the Brazilian Real against the US Dollar which hit a record low. As we saw in last month’s report, its still worth paying attention to this indicator and it remains high on people’s lists as something to watch out for.

As mentioned above, coffee was not the only market to fall over January. If we take a look at light crude, this market suffered the same fate as coffee. 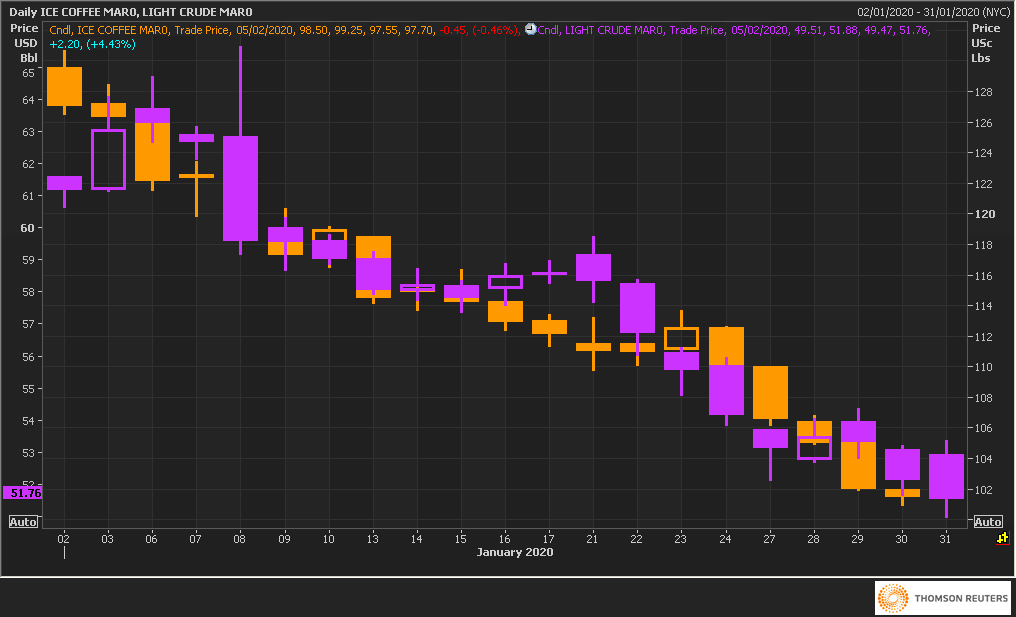 Light crude is in purple and the coffee market is in orange. Save a spike for light crude on the 8th of the month, and some sideways trading in the 3rd week, it also steadily lost value and closed the month 16.3% lower than how it started. This was largely down to the Coronavirus. Traders were concerned that it could hamper economic activity in China and therefore drag down global GDP.  Like how we now look at USD/BRL as a key indicator when analysing the NYC, could this be the start of another relationship between crude oil and coffee to watch out for? 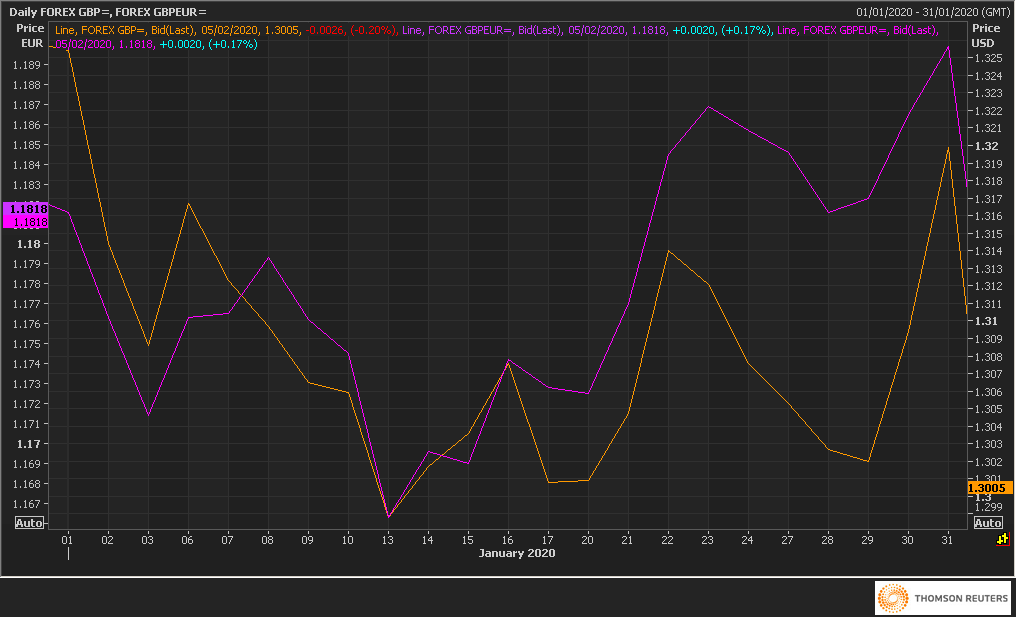 The cable started 2020 trading at 1.325 and then proceeded to sharply dip over the days that followed. Investors had concerns over the chance of the UK leaving the EU without a trade deal in place at the end of 2020. This was compounded by poor manufacturing data coming out of the UK, and optimism surrounding the US’ prospects with future business with China. Boris Johnson highlighted that the deadline of the end of 2020 was non-negotiable but did highlight that it would be tricky to agree on a trade deal with the EU in just 12 months. Pound Sterling lost value against the Euro as a result.

It wasn’t all bad news for Pound Sterling however. A series of positive data releases surrounding the UK economy (in particular some great CBI business figures) coupled with static Eurozone figures, helped the Pound strengthen against both the US Dollar and the Euro. On so called ‘Brexit Day’ there was much activity with both currency pairs and the month finished with GBP/USD at 1.30 and GBP/EUR at 1.18.

Data released by the ICO showed that from October to December 2019, Brazil exported 9.94 million bags, 14.4% less than in 2018/19. This is in line with expectations as 2019/2020 was the off year in the country’s biennial production cycle. What wasn’t in line with expectations were Peruvian figures, which showed the country exported 19.7% less than the year prior in the month of December.

Colombia differentials continued to increase and surprise buyers by the extent to which they rose. Demand strongly outstripped supply and many roasters were looking to cover before the arrival of the mitaca in April.

Each year in January there is generally a rush in Vietnam by farmers to sell some stock in preparation for TET, where they celebrate the lunar new year and have a big party. Prices generally come down a little as people are eager to do business. This year however, this was not the case. Differentials remained firm and did not ease as expected. Perhaps we’ll see a spate of selling in February?

This origin’s biennial production system has a large impact on global production and as its share of the pie grows, this impact becomes more and more potent. In a report published by COMEXIM at the end of January, they revised their estimate for the 2018/2019 crop to 64.5 million bags (a split of 48 million bags of Arabica and 16.5 million bags of Conilon), a whopping 1.5 million bags bigger than previously expected. While this is more than some origins’ total annual production (Rwanda and Kenya for example), it’s actually only 2.38% more than predicted. This illustrates the importance of this origin to other growers around the world and why many farmers in other origins regularly check the weather in Brazil to keep abreast of any key crop news.  COMEXIM also adjusted their estimate of the 2019/2020 crop, lowering their original estimate of 58 million bags to 56.8 million bags. The uneven maturation last summer was worse than many expected and it’s true there has been less fine cups on offer.

What about the 2020/21 crop though? There are whisperings from some corners that we might hit 70 million bags. COMEXIM estimates 67.7 million bags. The split they give (48.25 Arabica & 19.45 Conilon) would represent a record Arabica crop. This may scare certain readers but although Brazil will produce a lot more in 2020/21, due to the low NYC, not many other origins are predicted to increase. We always talk about production but it’s also important to consider global consumption figures. Some reports show that Chinese consumption is set to rise considerably in 2021 and global consumption is around a steady 2% year-on-year. This might help find a home for the potential record Brazil crop and also ensure we don’t see a further dip in the NYC.

It’s been a turbulent few years for this origin with record production lows and many young people leaving the coffee lands for the city. The one success story has been Tarrazu; this producing region continues to increase its share of Costa Rica production. Coope Tarrazu (one of the largest cooperatives in the country) broke their daily record with 6,600 qq received in a single day (equivalent to 4,400 bags of 69kg) and also registered a record volume for December. The harvest came in much earlier than expected which contributed to the record December, but in general Tarrazu is expected to have a big crop-as much as 15% more than last year by some estimates. Due to the earlier start, we expect most picking to have wound up by the end of February. Data from ICAFE (supplied by STC) gives us a snapshot of the harvest flow from October through to December. You can see how far ahead and how large the Tarrazu crop is by looking at the green line below in comparison to the other producing regions. 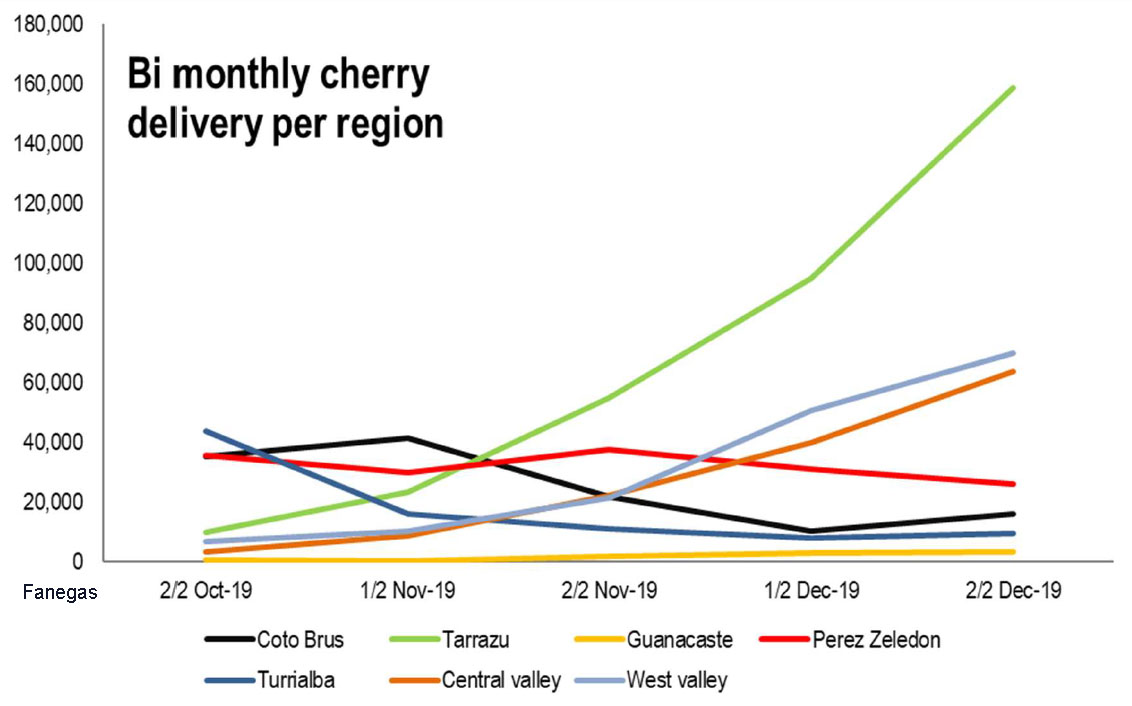 Harvest in the southern regions had finished by the 3rd week of the month and volumes were in line with expectations; slightly up on the 2017/2018 harvest, but much better than last year’s. Central & West Valley were 2-3 weeks behind schedule. Figures indicate that volume in Central Valley will be significantly better than last year, and figures in West Valley point to a sharp reduction compared to last year. Shipments from Tarrazu are typically later in the year than other regions but this year will be different with the earlier crop. Good news for buyers looking forward to the higher scoring Tarrazu lots, they’ll get to roast them a lot earlier than expected!

India’s monsoon (rainy) season traditionally runs from June through to September. In 2019 however, this was not the case. It started late in July and there was an irregular rain pattern for the latter part of the monsoon. Towards its end, there were heavy floods which caused significant loss of cherries, especially for Arabica plantations. Due to the nature of this year’s monsoon, the harvest has also started late, and in less quantity than expected. Figures point to a 30% drop in Arabica production for the 2019/20 crop. In January, warehouses tend to be full to the brim with coffee ready to be exported, but this year they were not even half full.

Stem borer has been an issue for many years in India, but the persistently low NYC has resulted in growers cutting back on measures to fight the insect in a bid to cut costs – this has not been without consequence: yields have dropped on many plantations. Many of the Arabica plants are ageing and therefore more susceptible to the insects. Rather than replace some of these trees (in some cases around 50 years old) or invest in measures to better manage the insects, many farmers are ripping trees up and planting Robusta instead.

It’s very rare to meet a farmer in India that only grows coffee and this fact has traditionally been a form of insurance against fluctuations in coffee pricing. Inter-cropping is the norm and arguably the most popular crop is pepper. You can see this growing in the picture below. 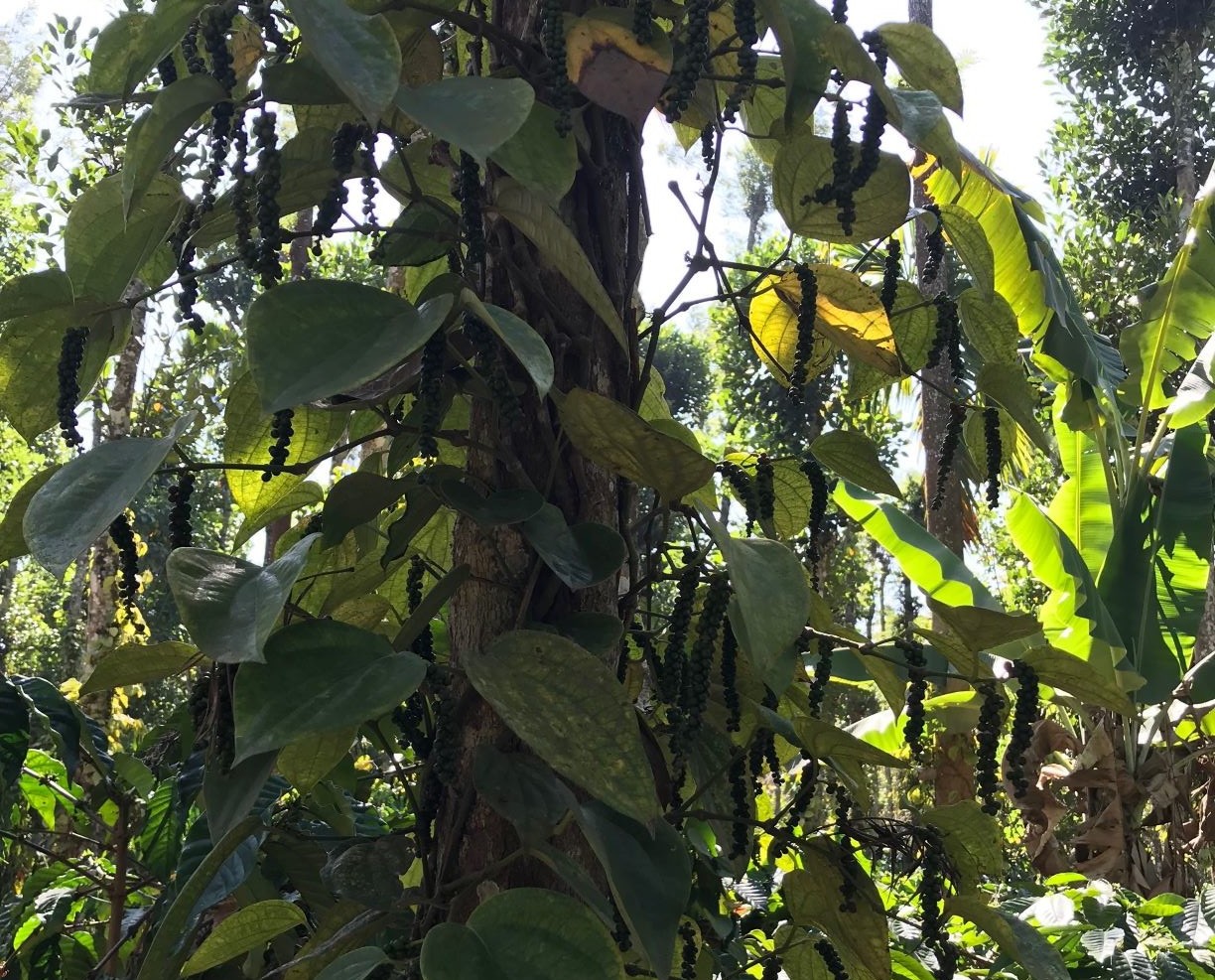 Unfortunately, the price for pepper has also fallen of late. Coupled with rising labour costs, it’s a tricky time for farmers; especially when their main competitor for Robusta is Vietnam, whose cost of production is significantly lower.

Although quantity is down on last crop, quality seems to be similar to last year. We expect the higher-grade qualities to become available for shipment in March/April. The Monsoon Malabars are of course a different story. Higher screens are harvested in January and brought to the seaside. They are then stored in onion bags (loose bags that allow the beans to grow in size and absorb moisture) and in June when the rain arrives are kept in open top warehouses for another 6 months of storage, which produces the typical monsoon flavour.

Fun fact! In India the most common way to drink coffee is mixed with about 30% chicory. This gets roasted as well and is blended in with low-grade coffee, which is often where the lower grades end up domestically.