Welcome to the January market report. We have edged one month closer to the date the UK is due to leave the European Union and British politicians are still unable to agree on anything. The end of the month saw the start of the Six Nations and with Liverpool at the top of the Premier League, it’s looking like we might see them win it, after a gap of 28 years! Back to coffee though. In this report, we head to Costa Rica, Ethiopia and Indonesia. 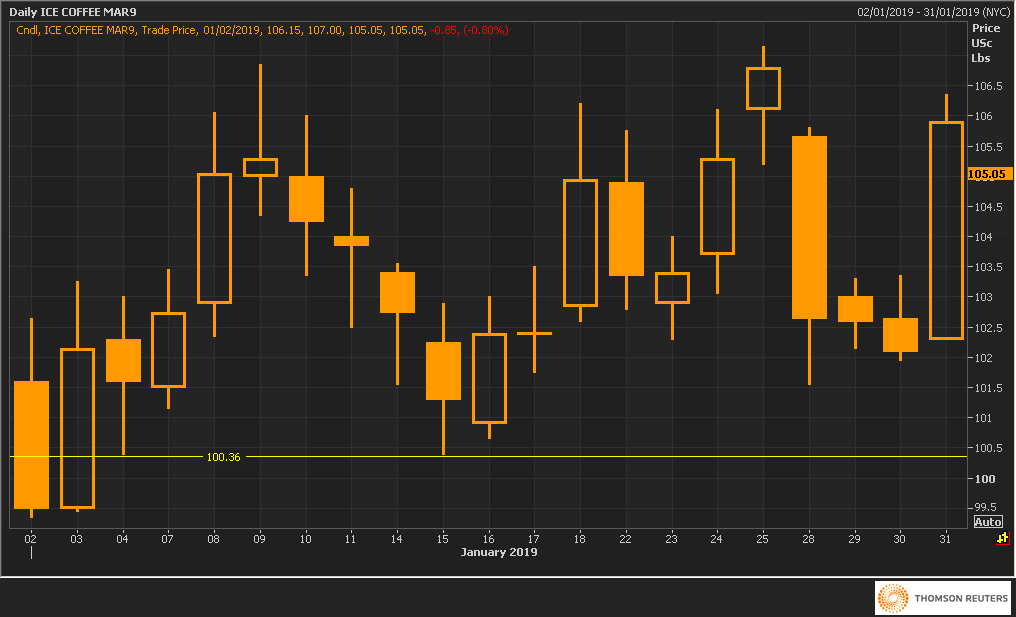 A double bottom is a technical analysis charting pattern. It describes a pattern where the market drops, rebounds, drops to the original level where it dropped to previously, and then rebounds again. When two lows hit the same level (as highlighted in yellow in the graph above, which we call the support level) the market is likely to rebound. In this month’s example after the double bottom, the market went on to rise to 107.15 c/lb. This technical analysis charting pattern can be applied to different time scales from 1 day charts to 60 minute charts.

The London market opened the month at 1,513 $/mt. During the middle of the month we saw technical and system-based selling in response to the firm US Dollar. However, this changed in the final week and there was a move to the upside, with the market closing the month 38 $/mt higher, at 1,551 $/mt.

GBP/USD (orange line) started the month trading around the 1.265 level, which, save a dip on the 2nd & 3rd of January, was very low looking at the Pound’s strength during the rest of the month. Pound Sterling steadily gained value and momentum over the course of January, reaching the lofty heights of 1.315 on January 25th. The Pound climbed on prospects of a Brexit deal and this was also aided by US Dollar weakness, driven by negativity surrounding the US-China trade-related news. HSBC predict 2019 will see the greenback strengthen amid slowing global growth. 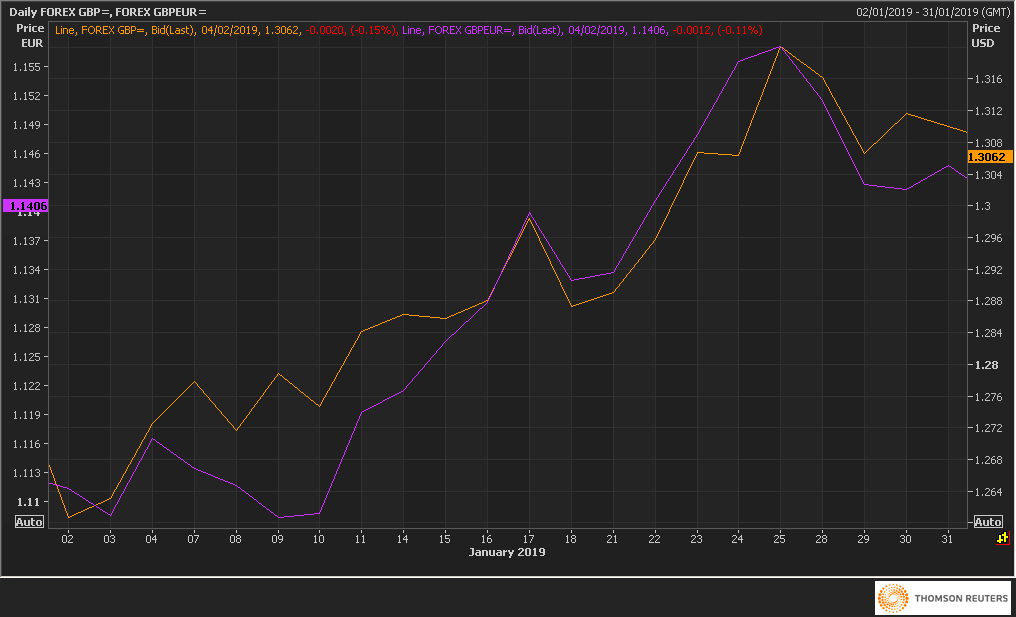 GBP/EUR (purple line) saw a similar trend to GBP/USD, with the Pound gaining value across the month and then seeing some of those gains dissipate in the final week. However, GBP/EUR was slower to strengthen and with Parliament unsure how they want to proceed with Brexit, many point to a weakening back to the 1.12 levels.

In Brazil, COMEXIM revised their figures for the 18/19 crop 2.35 million upwards, driven by an increase of 1.55 million bags for Arabica and 0.8 million bags for Conilon. Warehouses are full and the amount of coffee shipped is breaking records.

The strength of the Colombian Peso is hurting exporters again. It started the month at 3250 against the US Dollar and finished at 3105. While it has not strengthened to the levels of 2900 in September 2018, it is still having a sizeable impact on exporters. Excelso differentials firm as a result.

Vietnamese New Year, Tet, falls on the 5th of February this year. Selling picked up during the first half of the month and then cooled off as all eyes were on the upcoming celebrations. Nearly half of the crop is reportedly sold, with the harvest expected to wind up in the coming weeks.

The disconnect between the cost of production and export price for Djimma 5 has got to such an extent that the Ethiopian Tea and Coffee Board want to set a minimum price for coffee. As discussed in previous reports, exporters use this product to build up reserves of US Dollars for their more profitable import businesses. That’s not the only concern at the minute however. Rumours abound that many containers of organic coffee are arriving at European ports and incurring demurrage charges because of late organic transition certificates (TCs) being issued. Cooperative Unions are discussing how to streamline these procedures.

The good news is that regulation, albeit slow, is changing. Producers in the western part of the country, such as Bench Maji Union, have managed to get concessions for their growing region. Governors in local areas have given permission to exporters to ship their naturals earlier than last year as their harvest is two months before other regions such as Sidama and Yirgacheffe. Now they don’t have to wait, we should see an increase in the quality of coffee coming out of Western Ethiopia and a steadier finance stream for cooperatives there.

Talking of exporters, smaller exporters are able to sell cash against documents (CAD) up to a limit of $500,000. This brings down barriers to entry and increases competition as the bigger exporters have to use Letters of Credit and foreign buyers often prefer buying on CAD. However, with many exporters selling at a loss just to get US Dollars to fund their import business, the market is heavily distorted so the issue of competition and how to increase it is not simple!

As reflected in Honduras and Guatemala, the ‘Ticos’ (colloquial term for a Costa Rican) also experienced a delayed crop this harvest. Looking at the volume of cherry delivered for this time of year, it’s shown to be at a very similar level to that of 2016/7, which was the lowest crop on record!

Weather conditions have been very favourable which resulted in an even ripening of cherries across the board. Timely rain and abundant sun were key drivers. If you’ve read our 2018 overview, rain coming at atypical times in the year was a common theme across many of the major origins. While it is welcome news that the quality of this crop is predicted to be excellent, the drop in volume is worrying for producers, exporters and roasters alike. As you can see from the graph below, it’s predicted we will see a 179,284 fanega drop in production compared to the 2017/18 harvest. 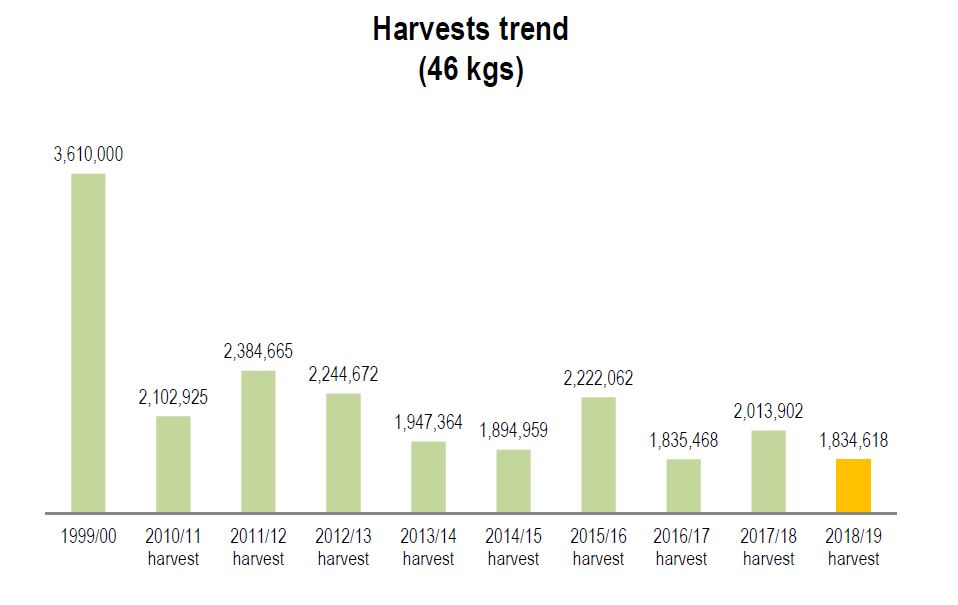 According to the data released by Icafe, the main drop in volume has come from the Central and West Valleys (-31.7% & -26.5%), with Turrialba the only region bucking the trend, up by nearly 10%. Expectations are that these trends will not improve, and many fear the drop in Tarrazu could worsen over the coming weeks. Prices are high, and the only signs of movements are towards the upside. Over 50% of the predicted crop is sold.

Chatter about the upcoming election in April dominates the narrative. Jokowi, the incumbent president, is the favourite. The more religious sections of society questioned the strength of his faith but his choice of running mate, the influential Islamic scholar, Ma’ruf Amin, Widodo, has boosted his standing in the polls. Rebuilding after the eruption of Anak Krakatau during the end of December is still underway. It wasn’t all bad news for Sumatra Island however. The harvest has been good and yields are up. Traditionally there was a clear-cut difference between the main crop and fly crop in Sumatra but many cooperatives and exporters increasingly find that this is not the case anymore. Climate change is homogenizing the crops and some people predict that in a decade the main crop (Oct-Dec) and fly crop (Feb-May) will switch around, with more volume produced in spring time.

After the drastic drop in production in late 2017 that caught many exporters short, people are offering less far forward for now. Although estimates for the Feb/May crop are positive, people are happy to wait until there is a clearer picture on upcoming crop volumes. If you want to read more about this origin, check out our latest trip report here from December.
Until next month!