New York opened on Monday 2nd January and the first day of trading of 2018 closed at 130.20 c/lb. The month closed at 121.85 c/lb. This represented a decrease of 8.35 cents (6.4%), with a monthly average of 124 c/lb. There was a steady decline for the first three weeks, with a brief rally in the final week because of some big players short covering. Bumper forecasts regarding the upcoming Brazilian crop were the major factor behind the downward pressure on NYC. All fundamentals and various reports suggest there is still room for the market to drop. The final COT of the month highlighted how many speculative players are short, with a net short position of 54,198 lots. 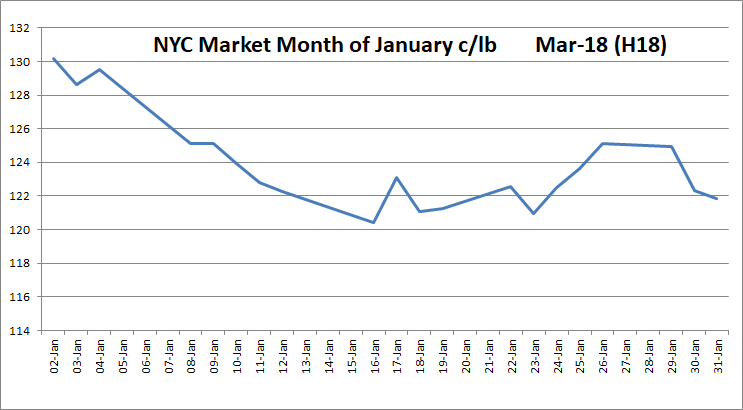 It was a quiet and steady month with Mar18 broadly trading in the 1750 to 1790 $/mt range. Since November 2017, London has been trading in the 1700 to 1800 $/mt range: with no major signs of fundamental movements, it could maintain this steady trading band. Selling is expected to pick up just before the Tet holiday in Vietnam. In India, production costs are going up because of higher wages, and the stem borer beetle is continuing to cause problems.

Sterling had been threatening to break the 1.40 barrier against the US Dollar for the opening weeks of January, and broke it during the fourth. The UK budget deficit was better than expected: however, the break was taken more as a signal of USD weakness than GBP strength. Due to this weakness, reports suggest that GBP/USD is no longer a good indicator of Brexit developments, with attention now turning to GBP/EUR.

Politics dominated the headlines in Brazil. The infamous former president Luiz Inacio Lula da Silva accepted his party’s nomination as its candidate for the upcoming presidential election. This spooked markets somewhat, and occurred only hours after a Brazilian appeals court increased his jail sentence from 9.5 to 12 years in jail. Could we see his return? After recent events in the political arena in Brazil, nothing is a given.

Concerns abound in Colombia about the strength of the peso against the US Dollar, which strengthened around 4.5% against the greenback since the start of the year. Producer margins have been squeezed, as exporters seek to remain competitive with their FOB pricing.

Vietnam exports are expected to be strong, in keeping with the switch from ‘off’ to ‘on’ year.

Production costs are increasing, driven by the rising cost of labour. Rural workers continue their large-scale migration to the big cities, leaving a significant shortage of pickers in the majority of growing areas. This cost of production increase, coupled with the low NYC performance, has resulted in low profits for farmers.

The other big issue is the stem borer beetle: it’s fast becoming the key talking point at every farm you visit. Many farmers are pulling up their Arabica trees and planting Robusta as it’s more resistant to the pests. However, with the quality of Vietnamese Robusta improving, the premium of Indian Robusta has slowly been falling.

At Sethuraman Estate (in Karnataka, Chikmagalur) the harvest is in full swing. This 6th generation farm produces Robusta processed three different ways: washed (parchment), natural (cherry) and semi-washed (mandarin). The farm has installed new processing facilities and a new water recycling unit. They used to need 4 litres of water to process 1 kilo of cherry: the new unit only demands 800 ml. On our recent visit, the mandarin grade in particular was the stand out of the table, providing citrusy and chocolate flavours.

The harvest has been developing well, but volume in the south is rumoured to be down by as much as 30%. Sidamo and Guji coffee have been cupping particularly well. Draft legislation for coffee marketing and quality is still circulating among exporters but nothing has been finalised yet. Buyers are excited, as traditional ECX coffees will now have full traceability, but problems still persist as you cannot cup the coffee before auction, and are reliant on ECX cuppers. It’s a step in the right direction, but the ECX is still not problem free.

In the west, Bench Maji Union are doing an excellent job of creating awareness about the region – and themselves. In the past, coffee from Bench Maji was often funnelled into Limu and Djimma and sold under those terroirs, but they are steadily gaining a name.

Sustainability is at the heart of the Bench Maji mission. Over 80-90% of the Ethiopian forest has been cut down in the last 400 years. Bench Maji Union aims to maintain the forest where the coffee gene pool is found, and do so in a way that provides employment for the local communities. The Union has also joined forces with Participatory Forest Management to empower communities through giving them clear rights to the forest and its resources,  engaging them to take responsibility for managing the forest in return. Effectively, the government becomes the monitor of the forest, rather than the protector. We source various grades from the Union which carry Fairtrade, Organic, Rainforest and Utz certifications.

Bumper crop! Reports suggest the harvest for 2018/2019 could be biggest on record. Conab, in its first forecast for this year’s upcoming harvest, predicted 54.44-58.51 million bags, which would smash the 51.37m record achieved two years ago. It’s the ‘on’ year in the biennial production cycle, so expectations were already high, but decent blossoming and a more regular rainfall have blown those expectations wide open.

Historically, Conab has been known to be rather conservative with its estimate, but in this case their numbers appear to be more in line with the wider market expectations. Rabobank, for example, predicted a 59 million bag harvest (42.4m Arabica & 16.6m Robusta).

These predictions favour the bearish speculators and many attribute the persistence of the low NYC market to these bumper predictions. Good rains show no signs of abating and the price difference between current and new crop keeps growing, suggesting more good times for the Brazilian trade.