Welcome to the February DRWakefield Monthly Market Report. It was a unique month as this year was a leap year and, on that day, (29th February), Liverpool’s unbeaten Premier League run was ended in quite some style by Watford, who won 3-0 at Vicarage Road; Arsenal’s Invincibles team record stands.

Coronavirus spread across the world and markets crashed as a result. More and more data point to a bumper Brazil crop this summer, but until that rolls in, it looks likely that supply will be tight from other key origins and there were significant increases on differentials of key commercial grades. This month we head to Colombia, Honduras and Vietnam for more in depth analysis on what’s happening at origin. 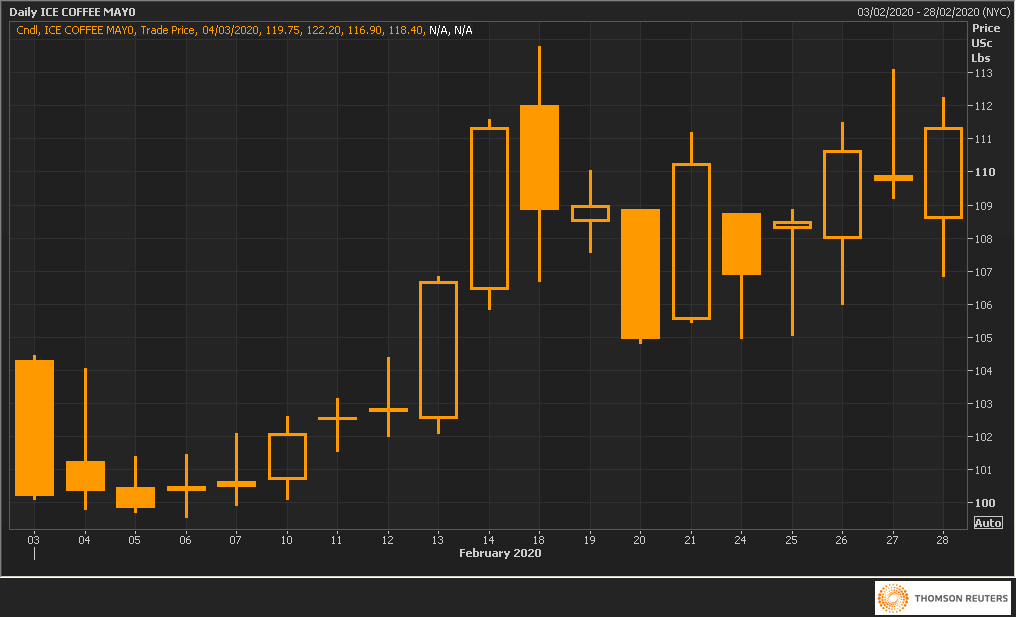 COT reports confirm that the specs are going back into the net short position they held at the end of 2019. Commercials are still net short but are trimming down from the record position they had previously held. There was much chatter about Coronavirus, and this continued to dominate the narrative surrounding the market and, global coffee consumption in 2020. 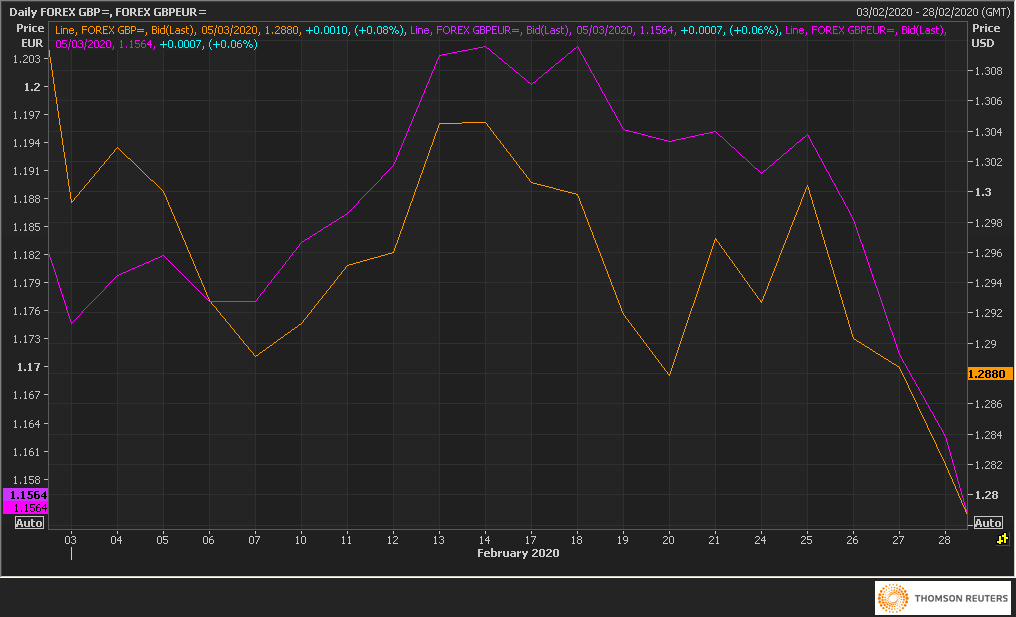 Navigating the ups and downs of Brexit and how it has affected Pound Sterling has been tricky for roasters and retailers in the UK. 1.30 for GPB/USD has long been seen as a target level for many UK roasters over the last 12 months. As soon as we hit it or are trading in that range, many people convert their USD contracts to GBP. February opened at above that level and dipped to below 1.28 on the last day of the month, representing a 20-week low. With the uncertainty surrounding Brexit and Coronavirus, it is difficult to say what direction Pound Sterling is going. As you can see from the graph, the Pound also lost value against the Euro and GBP/EUR hit a 4-week low at the end of the month.

BRL/USD reached record highs, but not as much selling occurred in Brazil as one might have expected. The link between BRL/USD and the NYC is starting to become less relevant. Supply is tight till the arrival of new crop in the summer.

Figures came in for January production in Colombia and were significantly lower than anticipated. According to the FNC, 1.05 million bags had been harvested in January, the lowest in the last 5 years. This came off the back of a record December where 1.68 million bags were harvested.

There was not much activity in Vietnam in February as price ideas between farmers, exporters and roasters were far apart. Many farmers are bullish and are waiting for a price increase before they start selling.

Differentials of Excelso EP have steadily risen over the last 5 years but since January they have skyrocketed. Buyers are lining up and wondering where the coffee is. We are in between crops and many exporters will likely fulfil their February and March FOB shipments from the upcoming crop so the shortness in supply is unlikely to abate. Generally, there is always some carryover stock between crops but not this year; even more surprising is this has come off the back of a record year for this origin. The FNC reported that last year Colombia produced the most coffee it has produced in the last 25 years with a total of 14.75 million bags produced and 13.67 million bags exported.

The graph below looks at production (bags of 60kg) since 1992 and over the last 5 years, the average yearly output has been 14.1 million bags. 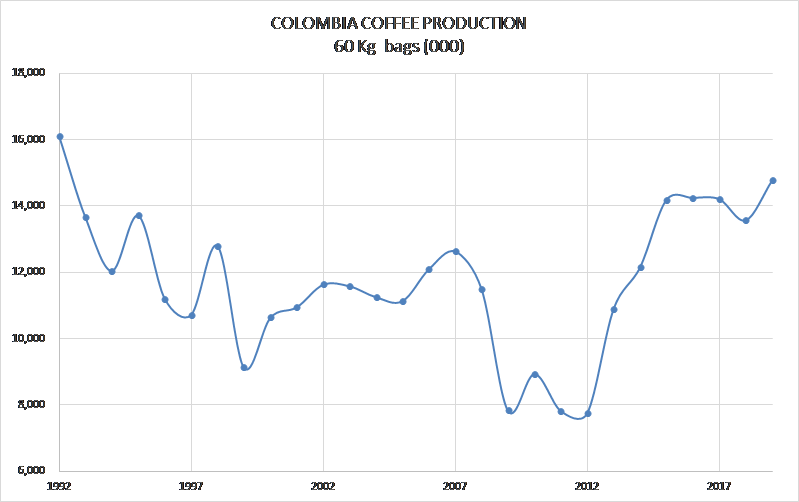 This high average has been maintained due to increased farm productivity, in spite of less land dedicated to coffee. If you look at the number of hectares planted with coffee since 2011, it’s been cut by 7.3%, ending 2019 with 853,000 hectares dedicated to coffee production. If you take that into consideration, the increase in yields in Colombia is even more impressive. Since 2011, 86,000 hectares per year have been re-planted with rust resistant varieties and the average age of trees is now around 6.5 years. With a lower average age of coffee trees and a more diverse mix of rust resistant varieties, it is hoped that production movements year on year will be less than in the past as the coffee plants will be better equipped to deal with pests and adverse weather conditions.

Talking of weather, rainfall hit all the coffee producing regions during the second half of the month. This helped the upcoming crop (mitaca) and also stimulated blossoming for the main crop due after. February also saw the launch of the price stabilisation fund by the Colombian government, designed to protect farmers’ income in the face of a persistently low and volatile NYC. We will be looking out for news on how this works out.

The 2019/2020 harvest has been atypical-full of rumours, uncertainties, a high domestic price and an unstable New York coffee market during some of the key collection months. It started with speculation that the crop would be very low, and this created a rush of exporters covering their physical, resulting in a surge in local pricing. Some prices would be as high as +35 when converted to FOB and this is in relation to standard SHG quality. This, coupled with the New York Coffee price surge at the end of 2019 where we went over the 140 c/lb level, resulted in some producers re-engaging with their farms. As a result of persistently low prices, many producers have neglected their farms and the increase in both local and international pricing saw some return and reinvest some of the profits they made. However, the reality for most coffee producers remains negative. Pricing has been below cost of production for many years now in certain producing regions and if any managed to take advantage of good pricing opportunities this crop, it’s mainly been used to pay off debt from previous crops and bring their accounts back into the black. Many coffee producers have switched over to other products, such as cardamom.

Certifications remain relevant for the sustainability of the Honduras coffee industry as the added premiums they give means that producers can make money over the long term, especially with regard to Fairtrade and Fairtrade Organic (FTO) coffees where the minimum outright FOB price plays a key role. More and more FTO groups are being established because of this but with demand remaining fairly stable, many are unable to find a market for their coffee. Honduras is the biggest coffee producing origin in Central America by some way and by some estimates the crop will be 30% lower than the forecast. This, coupled with higher Colombian prices, has impacted the price of other centrals and will certainly give a boost to Peruvian pricing for the 2020/21 crop.

Usually, the harvest in Vietnam finishes in February but this year it finished a few weeks earlier and had nearly all wound up by the middle of January. This was mainly down to dry conditions during the harvest period which sped up the process. Quality is reported to be good, but the average screen size is smaller than last year, with less screen 18 on offer. February was irrigation month, with farmers looking to strengthen their trees so they can focus on the development of the next crop – there were some rains in certain coffee areas but the majority of farmers had to irrigate. Thankfully, at the moment rain is in abundance, but this is not expected to last too much longer. It’s forecasted that there could be a water shortage in the central highlands, the main coffee producing area in Vietnam, in April. It’s not all bad news though. Flowers had bloomed a few weeks earlier than anticipated and up until the end of February, the flower blossom was plentiful. If the weather plays ball, we expect a good crop for 2020/21.

Much talk in the coffee industry has centred around the low New York Coffee price, with not enough attention paid to the low Robusta price. If you look at the middle of February 2020 compared to 2019 and 2018, you see the following prices: 1314, 1537 & 1807. Farmers are frustrated with the low futures price and many already switched over to other products, as per our previous reports. Usually, there is a big sell-off before the Lunar New Year in Vietnam at the end of January, but this year was surprisingly quiet. Farmers and exporters are playing a long game of chicken and it looks set to last. Estimates suggest that between 50-60% of the 2019/2020 has been sold.

Thanks to Sandra Marleny, Hernan Vergara and Andy Duong for their updates.