The biggest underlying fundamental of note was the shortage of Sumatran Arabica. Although it did not have a major effect on the NYC, many see it making an impact in the near future. Specs are short and continue to remain short. Is there a fundamental up story? Nothing of note but many remain bullish because of the spec short position.

First Notice Day (FND) was on Friday 16th February, as there was a US public holiday the following Monday. 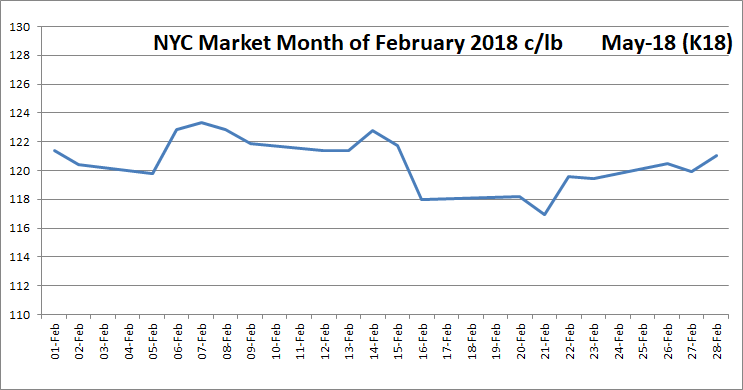 February saw London maintain the steady trading band of 1700 to 1800 $/mt. However, there was pressure on MAR18 in the middle of the month due to short-term supply issues. Falling certified inventories and the lack of any substantial fresh gradings coming through was the main cause.

Sterling started the month very strong, with GBP/USD at 1.42. However, this was not to last. Non-farm payrolls in America that were released in the first week of the month boosted the US Dollar. We have experienced a prolonged period of US Dollar weakness this year, and this was reversed somewhat with GBP/USD moving back to the 1.38/1.39 levels which is where it was trading at the end of the month. The Pound has also weakened against the Euro, with GBP/EUR trading in the 1.12-1.13 range. Fears of a hard Brexit with the UK leaving the single market continue to impact heavily on this currency pair.

Weather reports from Brazil confirm that rains across the major coffee producing states are consistent and in good quantity. Development of the 2018/19 Conilon and Arabica crops are progressing well.

The Colombian Peso remains strong against the US Dollar. With the low NYC and this currency situation, Excelso EP differentials remain in the +17 to +19 area, with many buyers reportedly holding off until the differentials come down. Whether or not that is driven by expectations of a weakening of the Peso or a rise in the NYC is unclear.

Vietnamese New Year, Tet, occurred on Friday 16th February. There was a spike in selling beforehand as farmers were hoping to get a nice payout before the celebrations. Activity remained quiet towards the end of the month.

The main crop towards the end of 2017 was 50% lower than expected and this has caused serious supply issues. Market players are short, with many unable to fulfill contracts. Cooperatives and exporters are fighting for coffee that has skyrocketed in price and is of questionable quality.

The main driver was the prolonged rainy season, which went several weeks beyond when people expected it to wind up. There were expectations that the crop in Northern Sumatra would be lower than usual and the market turned to Aceh as the saviour that would address the imbalance and maintain the predicted Sumatra figures. Confidence was so high that, in late November 2017, many exporters were continuing to sell in volume, with shipments from January right through to summer 2018. The absence of reliable data was certainly one of the main causes. Perhaps this could be a strong stimulus for an independent data source in the Indonesian coffee industry?

The main crop is now over, and as the dust settles, it’s clear that we won’t get a more accurate picture of the situation until the fly crop starts in earnest in March. It won’t be in full swing until April/May, and only then will we be able to ascertain how large this crop will be, and its quality. As we saw with the main crop, the market was wrong right up until the middle of the harvest!

If Sumatra is a core coffee in your range and you do not have stock covered, it is best to contact your trader to discuss the months ahead. Much of the fly crop will be used to honour contracts that were originally for the main crop, so it is possible that there won’t be much availability of Sumatran coffee until the harvest at the end of 2018.

Hit with unseasonal rain and cold temperatures for the second year in a row, Thailand is experiencing a shorter harvest season than in past years. Although the cherry quality remains strong, farmers are struggling to increase yield year on year.

The country’s burgeoning coffee culture and surge in the popularity of local cafés, coupled with low domestic production, mean that this year the government is set to eliminate tariffs on coffee imports from ASEAN and Australia. Tariffs on green and roasted coffee beans can be as high as 81%, urging local market players to call for substantial reductions to cope with domestic demand. Many Arabica farmers are pulling up their plants in favour of low quality, but higher yielding, Robustas. The market is keeping a close eye on the 2018/19 crop as local prices begin to fluctuate.

As Thailand’s specialty Arabica coffee continues to gain recognition in many parts of the world, it will be of utmost importance for local specialty Arabica farmers to be protected from the surge of import coffees. Various coffee growers’ associations are being formed to protect the interests of these farmers, and also to promote Thai coffee to domestic and international consumers.

With several external factors placing immense pressure on Thai coffee production, the coming year will certainly be one to keep a close eye on.

The first cherries were harvested towards the end of November/early December, with an estimated one-third of the crop left to be picked. In some areas, the harvest began earlier than usual but is expected to finish later as the development of cherries has been slower than expected due to a colder start to the year. Weather for this crop has been atypical, as there have been sporadic rains all across Pyin Oo Lwin, Mandalay and in neighbouring Shan state. Some producers have built polytunnels so that they can dry their naturals even when the rain is pouring. But this is an investment some smallholders are not able to make.

We cupped washed, honey and naturals from Mandalay, Shan & Chin states and were impressed with the quality of the crop.

In the Myanmar Coffee Association (MCA), the national body that supports the coffee industry, there are six clusters that represent different producing areas across the country. Chin is the newest cluster, and after all the work we did in 2017 with the ‘Chin Litai’ group of farmers, it’s great to see this state starting to gain traction in coffee production. We will have a new crop of Myanmar coffee arriving to the UK towards the end of May. If you want to learn more about our recent trip there, please check out or report here.