Last month we saw the continuation of Covid-19 news with more countries being added to the quarantine list, imposing further restrictions on the UK population traveling abroad. There are several countries still showing high infection rates including, but not limited to, the US, Brazil, Peru, Mexico and India. Some tech-based companies announced they will continue to work remotely until late 2021, while others are slowly moving back into their offices. Despite the holiday period demand not being as sluggish as one might expect, on the 17th August a second stage of Self Employment Income Support Scheme (SEISS) opened for application to help self-employed businesses land back on their feet. Big money spending policies by the US FED continuing in response to COVID could put inflation back on the agenda again.

A limited recovery in out-of-home consumption continues to challenge domestic supply chains. Nett global surplus has been adjusted to a light 952,000 bags. Going forward, the 2021/22 crop development as well as the futures and currency exchange rates, combined with the re-opening of economies around the globe, will be closely monitored to try to make sense of this volatile market environment.

Although we saw good conditions overall in coffee producing countries, NOAA is predicting 7 to 11 hurricane storms this season, with ‘Marco’ and ‘Laura’ already having made a devastating impact in August. Going forward, model predictions and expert assessments have increased the chance for a La Niña development from 50% to 60%.

Meanwhile, the UEFA nations league has kicked off replacing the friendly matches and providing 4 direct access tickets to the European football tournament postponed to summer 2021.

This month we head out to Rwanda, Ethiopia and Myanmar for updates and in-depth analyses. 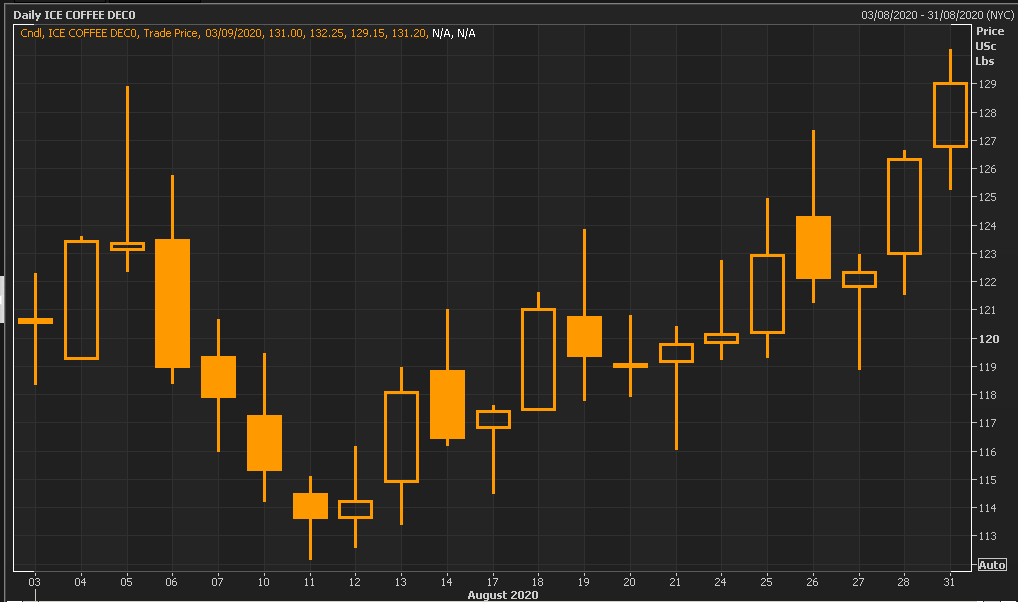 There was much debate about the futures’ ‘fair-value’, as it seems commodities are on the radar of the bigger strategic investors. Having already witnessed a 15 cents/lb increase in NYC July, August added another 10 cents to reach 129.05 at the end of the month. It started to dive on the 6th of August, mainly due to short-term speculative selling, after which it continued the upward trend, largely driven by funds boosting their nett long position adding 7000 lots to reach a 7-month high of 350,312 lots end of 25th August.

During August the certified stock draw-down amounted to a massive 360,963 bags with the majority being Honduras grades (298,950 bags). These stocks have now reached the lowest level since 2000. Rumour has it that Brazil is giving it another go and is about to flood the ICE exchange warehouses with their (semi) washed coffees in September. In theory this could happen, however the ICE graders must first approve the quality. Output of the washed Brazils this season was about 2.5 million bags, which represents a rough 4% of the giant’s total expected crop volume.

After falling 25% from last December’s high (1501 $/MT), Robusta prices bottomed out in April. In July it started going up again as demand for instant coffee (which is typically made of Robusta beans) had increased. On August 25th, the London terminal noted a new high (1512 $/MT).

Robusta accounts for 40% of global coffee production, yet its share within the specialty markets is neglectable. What if it’s processed properly? New varietals and new processing methods such as honey and naturals, plus decades worth of research are starting to pay off and unveil some new pearls under the name of ‘fine-robusta’. 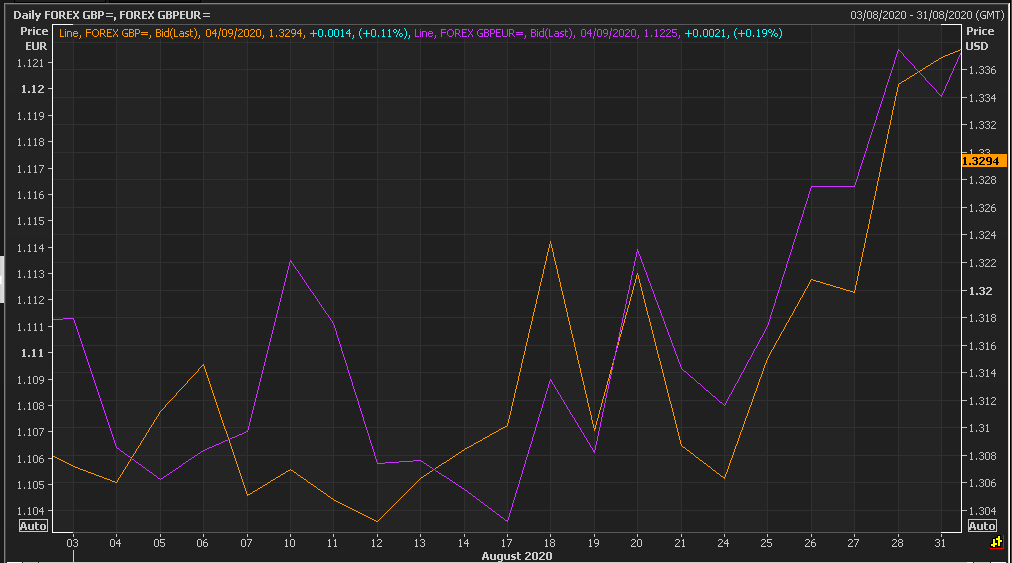 August started with the Pound in a strong position against the greenback at 1.308. It sloped slightly and then picked up to 1.314 on the 6th after an announcement by the BoE of a predicted shrinkage of 9.5% in the UK economy in 2020, compared with the initial 14% forecast. Over the coming days the value fell to the month low of 1.303 due to unemployment results, with a slight resurgence in the middle. A two-pronged attack caused the strengthening of Sterling against USD to 1.323, as the American economy suffers from Covid-19 and Congress discusses their fiscal stimulus package at the same time the Pound stays strong ahead of Brexit discussions resuming later in the month. The 18th saw an 8 month high only to fall sharply over the next day back to 1.31. This initial slump was short lived, and the value rose again over the next 24 hours. The Brexit story toed the same line as usual and a lack of progression pushed the value of the £ down once more. The vulnerability of the dollar saw a steady and sustained rise for the Pound until the end of the month, ending on 1.338.
the final day.

Sterling began the month in a strong position of 1.106 but quickly fell as the Euro strengthened as a result of a data release stating the Eurozone’s retail trade rose in July. The Bank of England’s monetary policy meeting helped to push back against this decline and saw the first third of the month claim a respectable 1.113. The next week saw a fall as speculation continued around the discussions in Brussels starting on 17th August. This marked the lowest value of the month – 1.104. From this point the Euro closely mirrored the dollar in its fluctuations for the rest of August. The £ bounced over the next few days up past the month open to 1.114 and slumped back down 1.108. With Brexit talks ending, and a delay until they resume in early September, it climbed nicely despite the release of weaker than expected sales data. This was helped by key speeches at the Jackson Hole Symposium which showed the Pound upwards against the €, as well as helping to strengthen the Euro against the Dollar.

The Brazil arabica harvest is coming to an end in all regions, without any real difficulties incurred, although reportedly there’s a serious shortage of food grade containers available, which could lead to delays of up to 3 weeks for nearby commitments. Quality and screen size were reported as good, with low grades below 20%. Farmers took advantage of a sharp rise in futures value, combined with weakening currency in August (USD surpassed 5.67, which is highest level since May) making it attractive for exporters. A good portion of the crop (about 60%) is already sold and committed to forward shipments, with 25% of next year’s crop also already sold. There is also significant spot demand in Brazil from domestic roasters. Let’s not forget that next to being the largest producer and exporter of coffee, Brazil is also the largest worldwide consumer. The spot market price in Brazil can be measured by the CEPEA/ESALQ index, which is a price index based on transactions with Arabica coffee type 6 for deliveries to Sao Paolo, coming from five different reference regions all over the country. On August 31st, the CEPEA/ESALQ Index closed at 610.57 BRL (111.50 USD/60 kg bag), 8.7% higher than that on July 31st

Stocks in Vietnam are estimated > 460 K MT. This is 21% higher than last year and attributable to a higher crop number, which ended harvest just before the COVID outbreak in March. The spike in the Vietnam Robusta differentials is not well received by roasters and forces them to look for cheaper alternatives.

Farms are situated in central, south and western regions of the country, growing 97% arabicas with most of it being of the Bourbon variety and all for export. The government is very supportive, and focus has moved from commodity grades to speciality with investments in planting materials, special processing techniques and helping out cooperatives to establish washing stations and dry mills themselves. There are now over 300 washing stations in this small and very dense country, up from only two in the year 2000!

Covid is causing serious delays locally and between borders in Africa due to stringent measures imposed by government. It took twice as long to bring cargo to the port and logistics costs are up 30%. Things have started to improve now that there’s better coordination between member states.
Climate change has affected the harvest by giving an early dry season, therefore slowing the cherries’ growth. However, farmers we work with are all doing well this year and have not been affected by Covid. Of course, all precautions are taken at the washing station as that is where they tend to meet and chat on the days of picking and delivering.

Weather Safe, which is an agronomic satellite observation service company is getting more popular. Via an app, it is providing accurate text updates to farmers on what they should be doing as the weather/climate changes. People are getting on board with the app now that they realise the information is important and that the guidance gives them better quality and higher quantities of cherries, therefore more income.

Political unrest over the assassination of a famous Oromo artist/activists in July remains. Ethiopian elections have been postponed due to COVID, however the Tigrai region announced it will conduct its own elections. This is not a coffee region, but as we saw earlier, the government has no problem with cutting off the internet connection for two entire weeks when there’s unrest.

Drought has affected productivity in south and southeast coffee producing regions. The coffee price at the Ethiopian Commodity exchange (ECX) is still very high and it is better to sell to the ECX than exporting in most cases. In the upcoming harvesting season, local coffee price (cherry) is expected to rise at least by 30% from last year due to the price rises happening at ECX

Myanmar is facing new elections on November 8th. It will be the third this decade since the new democratic era. The coffee harvest runs from December to April and the Arabica/Robusta distribution is about 80/20%.

There are several regions producing coffee in Myanmar. We source mainly from two different origins: Ywangan Region in Southern Shan State, and Pyin Oo Lwin (the coffee city) in Mandalay department where a lot of estates are based. Nowadays Hopong or Chin Regions are increasing in volume. In the south of the country you can find Robusta.

This year the rainy season started later and was shorter during the cherry development stage, resulting in a slightly lower screen size, but overall quality was not affected.

More and more growers have started expanding their acreage and experimenting with planting new varieties such as Mundo Novo, Yellow Bourbon, Catuai, Catiguá (all Brazilian), Geisha’s or other Catimor cultivars from south east Asia. More producers are trying out SL-34 and SL-28 too.

One of our representatives has done a survey asking around about the situation in each coffee village. This is a small resume of their conversations:

Till next time coffee folks!