August kicked off with more cricket with the start of The Ashes at Edgbaston. Post the July Cricket World Cup victory, expectations were high! Reality set in after the 1st test however, only to be then broken by anunbelievable innings by Ben Stokes in the 3rd test at the end of the month. The Premier League returned, and like last year, it looks like it could be a two-horse race between Pep Guardiola’s Manchester City and Jurgen Klopp’s Liverpool.

Pound Sterling continued its slide against the US Dollar, along with coffee futures which maintained its bearish trend. This month we head to Vietnam, and then west to Costa Rica and Nicaragua. 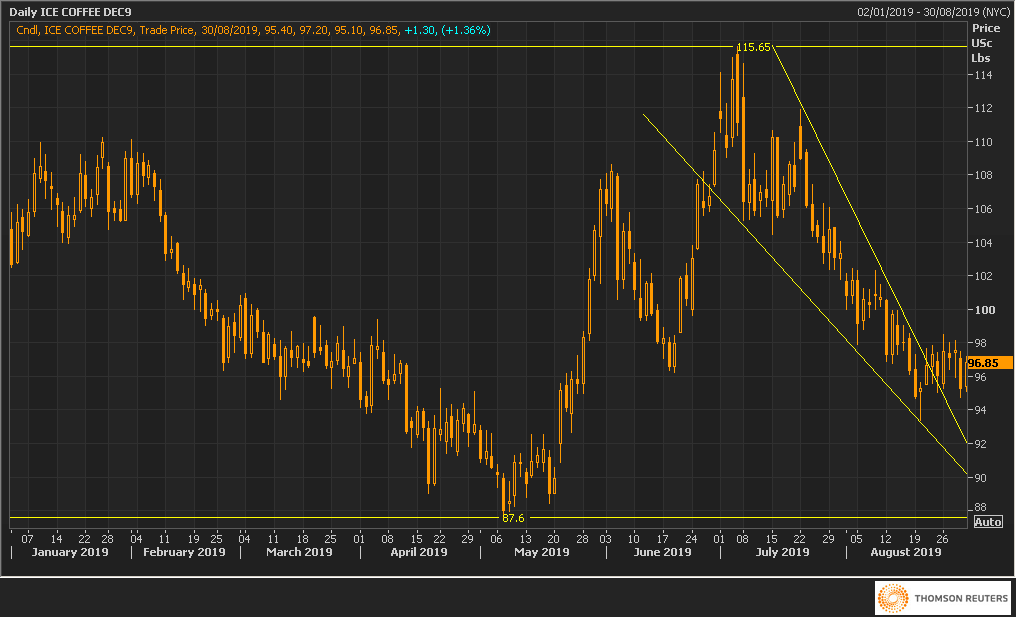 As we near Autumn, we thought we’d take a look at where the NYC has been in 2019.  As you can see from the yellow trend lines, the highest point of the year so far was 115.65 c/lb, and the lowest, 87.6 c/lb; a range of 28.05 c/lb. At its low, that’s nearly half the Fairtrade export minimum price (160 c/lb). When the market is this low, the Fairtrade minimum price is invaluable and a great asset of the certification. As you can see from the yellow channel, there was a steady and prolonged downward trend in July and August which broke out towards the end of August.

With the stormy global macroeconomic outlook, commodities are increasingly seen as a safe haven which posits the big question ‘Will the specs pile into coffee adding more shorts to their position?’ The large commercial roasters are reportedly covered up until May-19. We will be closely watching the Commitment of Traders (COT) to see how these positions progress.

GBP/USD starting August trading at 1.21 and was trading around that number for the first week before dipping to 1.20 after the release of negative economic data that alluded to an upcoming recession in the UK. We have seen £ Sterling lose over 15% value against the US Dollar since Brexit but 1.20 was a psychological barrier that held the market’s attention. Some people thought if we broke through the barrier, we’d see a nose dive. It wasn’t to be however, and £ Sterling spent the month regaining value, seeing a high of 1.22 on the 27th August. What goes up, must come down though. When Boris Johnson announced he was going to suspend Parliament for five weeks after the 10th September, £ Sterling lost all the value it had gained and fell to 1.20 again at the month close.

What about the GBP/EUR currency pair? Well, on the 9th of August, £ Sterling hit a two year low against the Euro at 1.074. Like it did against the US Dollar, GBP went on to strengthen and also hit a month high on the 27th August. It managed to stave off a nosedive, primarily because of concerns over the political and economic situation in Italy and its potential impact on the Euro going forward. It closed the month at 1.104. 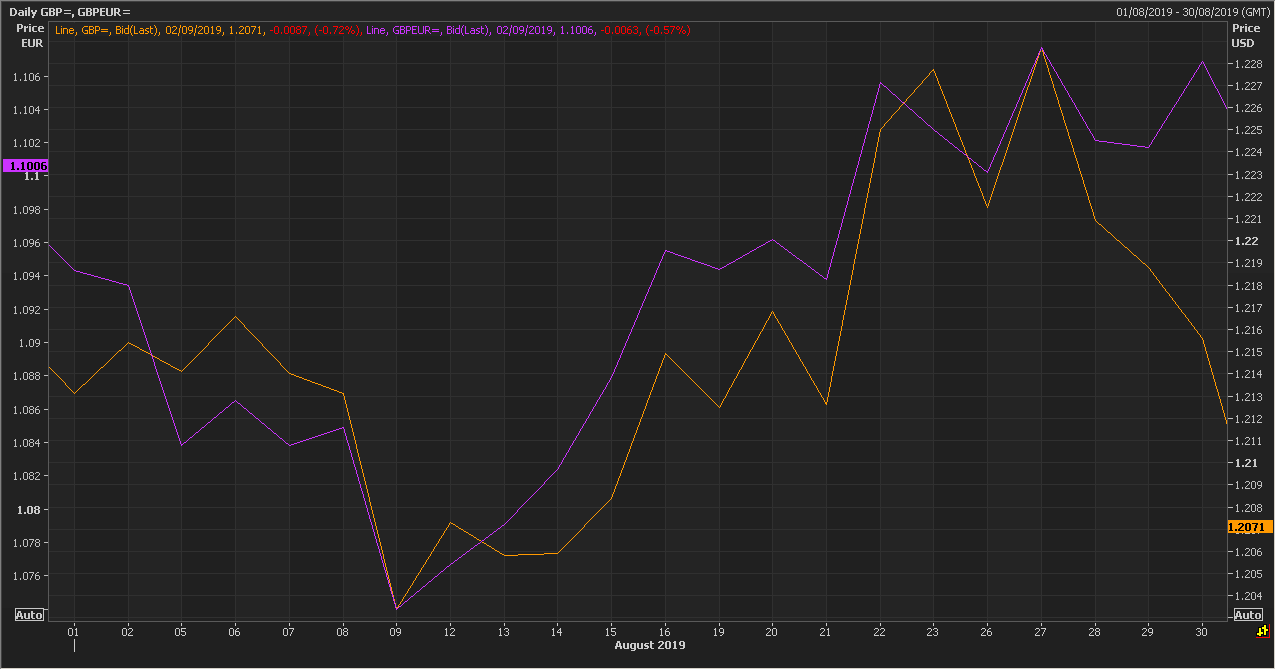 In the second week of the month Reuters reported that Brazilian coffee farmers had harvested 93% of expected production for the 2019/2020 crop. This is ahead of schedule, with the 5-year average for this period at 84%. Both producers and exporters remain concerned about quality due to the several flowerings that took place this year.

Colombia’s differentials have remained firm. The Colombian Peso devalued against the Dollar which has helped exporters with the drop in the NYC, but export prices are still below cost of production in many areas. In the middle of July, the Peso was around 3,200 to 1 Dollar, and by the middle of August it had devalued to 3,450, a reduction in value of 7.8%.

Although a large amount of rain fell in Vietnam over August, the cumulative figure for the year is still down compared to last year. New crop offers are high, and roasters are holding out for better prices.

The South of Costa Rica has traditionally been the place to pick up well priced HBs that can ship earlier than the SHBs. This was particularly relevant for roasters that wanted Costa Rica all year round as they could get new crop HBs shipping FOB out of Puerto Limón from October onwards. This is still the case; however, for the last few years, in the summer when people start talking about lower altitude Costas, there seems to be less positivity surrounding the quality and less coffee to offer. Climate change is the main driver of this: the lower altitude zones are experiencing much higher temperatures and more pest outbreaks as a result. With the low NYC, there is less willingness from the state and private banking sector to help finance producers who are making less money in areas whose future hangs in the balance. Cooperatives and mills are less supportive in making forward contracts with this uncertainty around supply, which further reinforces this move as there are less banks keen to provide pre-finance where there are no forward contracts in place. We might see more roasters moving to other Central American countries in pursuit of this lower altitude cheaper priced coffee.

It’s not all bad news however. With the changing climate, many of the higher altitude areas in the south now have better conditions for growing coffee and there has been a significant drive to renovate old farms and also develop new areas that are suitable for coffee production. We’re entering the third year of this and the main new varietal on the scene is Obata. Productive varieties such as these are helping ensure that there is not such a large drop-in supply. This is also helped by supportive cooperatives and mills who recognise the increase in better quality coffee available and are therefore supporting growers with future contracts. There are also key agricultural inputs such as fertilizers to help ensure the supply is there for the long term.

This month we got a detailed update from Markus Fisher at La Bastilla Estates in Jinotega, Nicaragua. Below you can see a graph on the amount of rainfall the farm and the neighbouring farm, Santa Luz, has received this year, against last year and also against a 14-year average.

As you can see, this year looks to be a very dry year. Rainfall measured up till the end of August was 40% down on last year and also down on the 14-year average.

For optimum cherry development, there needs to be a certain quantity of rainfall but also the timing is of paramount importance. In Nicaragua, May through to September are key months for bean development and therefore if there is less rain in these months, this presents a big problem for coffee trees. Up until May there was a normal amount of rain but since then the gap between this year compared to last year has opened up considerably. The historical average is 2,222 mm and the ‘ideal’ rainfall from an agronomist’s perspective would be between 2,250 and 2,400 mm. Anything below 2,000 mm causes a hydric deficit. If you want more data on rainfall in Central America, check out the interactive map from the Comité Regional de Recursos Hidráulicos here.

In other news, the effects of a tax reform back in February are now being fully felt. The government abolished exemptions on VAT for all agricultural inputs, which has considerably raised the cost of production for farmers and exporters. In one fail swoop all agricultural inputs rose by 15%. This translates to around 450$ per hectare more for coffee farmers. With the NYC sliding and cost of production rising, it’s a bleak situation in Nicaragua at the moment. Crop predictions point to a reduction in volume for the 2019/2020 harvest.

The Vietnamese coffee belt was hit with very heavy rainfall in the first half of the month: the lakes, streams and rivers which were depleted are now back to normal levels. However, some of the key producing areas such as Dalat and Daklak suffered flash floods and this saw a large percent of cherry blasted off from the trees. Unfortunately, this did not just affect coffee cherries, but also coffee resting in parchment in those areas. Many shippers have had to dry their parchment back down to an acceptable level of moisture ready for export in response to the increased humidity. This has already started to push forward shipments by a few weeks. Vietnam typically experiences around 10 typhoons per year and up to now we have only seen three. Will we see seven typhoons squashed into the last quarter of the year? This could wreak havoc on the upcoming crop year (2019/2020).

Let’s head back to the current crop though. It’s estimated that around 90% of the crop has been sold, with the majority of the 10% held by farmers in their warehouses, waiting to be sold to exporters. The growing domestic consumption has pushed up local prices so farmers have the option to sell to exporters or to sell into the local market. Many exporters sold short and are now suffering the consequences, making losses on contracts that were agreed many months ago. Farmers are happy to hold out while prices are unfavourable so there remains a large gap between price ideas between farmers, exporters and roasters.