Welcome to the April DRWakefield Monthly Market Report. Only 2 months ago we were discussing Liverpool winning the Premier League without losing any games and now it’s unclear as to whether they will even have the chance to finish the season! The UK was in full lockdown for the entirety of April and the same was the case across much of Europe and the rest of the world. It was a month where many adjusted to working from home and we all learned new terms and acronyms like furloughing and PPE.

However, even in lockdown mother nature continues. In the UK bluebells and wild garlic arrived in abundance, and across many coffee origins, cherries developed as per usual. They are due to be picked over the coming weeks and much attention rests on the upcoming Brazilian harvest which started in some regions at the end of the month. The key question that keeps cropping up, is how will Covid-19 affect supply (in terms of harvesting, milling and shipping) and to what extent will it affect global demand in the short to medium term?

This month we head to Brazil, Indonesia and Colombia for more in depth updates. 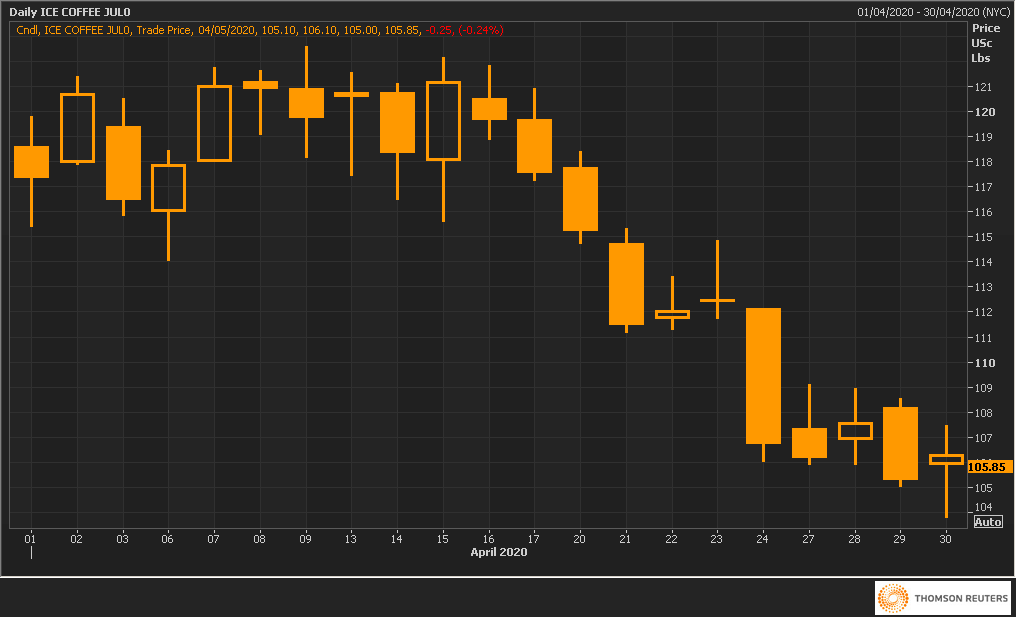 April started trading at 118.60 c/lb and people were bullish; there were container shortages across Central America and restrictions on the mobility of agricultural workers in Brazil sparked fears surrounding the upcoming harvest. It looked like there could be supply issues over the short run and although the market had nearly touched 100 c/lb only two weeks prior, the talk was now of how high, not how low, the market would go. The trusty inverse relationship between the BRL and market was not as relevant as it had been at the start of the year and although the BRL was weakening, the bulls still dominated. However, even though it looked like there could be a shortage of supply, the uncertainty regarding global demand meant that activity was hesitant and we saw the market trade sideways for the first couple of weeks. It hit the month high of 122.60 c/lb on the 9th of the month and then on the 16th traded in a clear downtrend for the rest of April. It threatened to rally on the 22nd and 23rd, only to fall 6.1 c/lb on 24th, closing the month at 106.30 c/lb.

The weekly COT reports show that the specs maintained their net long position over the course of the month, registering a position of 8,701 lots long on the 7th April, and 6,398 lots long on the 28th of April. Open Interest decreased, with investors pursuing other commodities or assets.

Large industrial roasters were wary of the supply threat we touched on earlier, and as a result Certified Arabica stocks decreased by 7.9% month-on-month to 2.11 million bags in April 2020, which was the third consecutive month of decline.

April recorded the lowest monthly average price for Robusta since June 2006, according to the ICO. The July terminal closed the month at 1,194 $/MT. Much of the old certified Conilons which had been lying in certified warehouses for quite some time were drawn down. 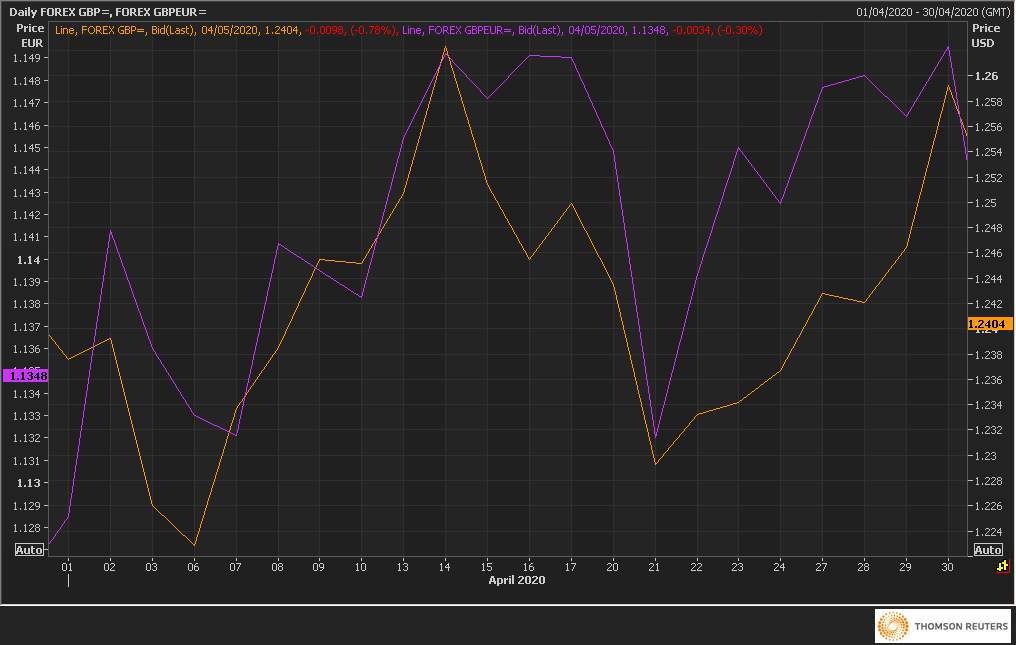 GBP/USD started trading the month at just over 1.24 and suffered a rapid drop in the first week, hitting the month low on the 6th April of 1.223. News that Boris Johnson had been admitted into intensive care was the main driver. As we have seen in the coffee market and across many asset classes, volatility is back, and the forex markets are no exception. The next week saw Pound Sterling regain all the losses it suffered in the first week and it appreciated against the Dollar to hit the month’s high of 1.26 on the 14th of April. Positive global market movements and the PM leaving intensive care helped fuelled this upward surge. After hitting that peak however, it then proceeded to drop again and nudged just below the 1.23 support level, before rising again to finish the month at 1.255.

GBP/EUR largely tracked the cable, save for the first 2 days where Pound Sterling gained significant value against the Euro while the Pound traded sideways with the US Dollar. GBP/EUR started the month trading at the month low of 1.127, and quickly surged to a 3-week high of 1.141 due to European equities markets experiencing large losses. It dipped and then went on to strengthen in the run up to Easter Weekend. Like GBP/USD, it nosedived on the 20th and bottomed out on the 21st, before finishing the month strongly at 1.145.

Harvesting in Brazil began in its Conilon producing areas. Although coffee production is more mechanised in Brazil, restrictions on movement of people still had an impact and made it more difficult for Conilon farmers to find temporary workers to help them harvest their fruit.

Colombia’s exports for the first six months of the coffee year (October to March) reached 6.81 million bags, 4.7% down on the same period for the year prior. This drop-in export is largely down to the unexpected fall in production that occurred at the beginning of 2020 that left many exporters short. In spite of the depreciation of the Colombian Peso against the US Dollar, differentials remained unchanged, with excelso pricing hovering around +50.

Vietnam also saw a decline in exports for the first 6 months of the coffee year, dropping by 3.7% when compared to the previous year; the final figure was 13.65 million bags. The persistently low-price climate in Robusta appears to be having an effect, with many farmers having switched over to other products last year. However, the Vietnamese Dong continued to lose value against the US Dollar which has helped farmers in the short run.

This month we got an update from Cadefihuila cooperative in Huila. Coffee is one the most important agricultural products in Huila department and this year it’s projected that farmers will harvest over 2.5 million bags (of 60kg) of dry parchment. This is a big number and indeed, Huila is one of the largest coffee producing departments in Colombia. Like many regions across the country, it has 2 crops: the north and west of Huila harvest in the first half of the year and the south of Huila harvests in the second half of the year. 60% of production comes from the south, and with this production split, it ensures that roasters have access to fresh coffee from Huila all year round.

The harvest from the north and west is due to start in May/June, but at the moment the big concern is lack of pickers. With restrictions on movement by the national and regional government, many fear that a sizeable % of cherries will simply not be able to be harvested, or at least not in a way that will mean they are good enough for excelso grades or above. This is due to impact medium and larger estates more than cooperatives, as many cooperative members are small holder farmers who pick their own coffee, and are therefore not affected by the movement restrictions as much. The good news is that weather has been excellent for production and quality, therefore when movement restrictions are lifted, the quality of coffee that will be harvested is expected to be very good. It’s expected picking will be drawn out longer to the end of July. Harvesting in the south is expected to begin in October/November.

Data released by the National Statistics Agency showed that the Indonesian economy grew by 2.9% in the first quarter of 2020, significantly less than the 5.07% registered for the first quarter of last year. Since there were practically no cases of Covid-19 in January or February, there are concerns surrounding what the Q2 (April to June) figures will look like. Consumption has plummeted amid measures put in by the government to contain the virus. The country is facing multiple crises: a health crisis; a financial crisis, and a collapse in commodity prices.

We spoke to our friends at Ketiara Cooperative in Aceh and they confirmed that in Sumatra Arabica cherry prices have dropped by as much as 40% since February. Although there is no talk of defaults on contracts, business going forward has dried up. Price ideas between farmers, exporters and importers are far apart and with depressed global demand set to continue, one wonders how long it will take to find a new equilibrium? It’s a tricky situation for cooperatives as purchasing cherry from their members will drain cash flow in the absence of future contracts, but if they don’t purchase any cherries this threatens the livelihood of their members, who are the backbone of the cooperative.

The situation is even tougher for Robusta farmers, who make up 73% of Indonesia’s coffee production, according to government data from 2018. With the Robusta market at persistently low levels, it’s a very challenging time for farmers and Covid-19 is exacerbating it. It’s too early to tell but it’s possible many small holder farmers will pull up coffee trees and plant other more lucrative cash crops like we have seen in Vietnam. In 2018, 1.24 million hectares of land were dedicated to producing coffee (both Arabica and Robusta). Of this land, 95.4% was farmed by small holder farmers, with large single estates comprising 2.4% and state-owned farms the remaining 2.2%. There have been rumours that the government might create a fund similar to that in Colombia where there is a form of subsidy to coffee farmers, but this appears to be just wishful thinking at the minute, with no concrete evidence of any plans in place.

There is some positive data however. Indonesia’s shipments in the first six months of the 2019/20 coffee year reached 3.12 million bags, 54.1% higher than in the same period for 2018/19. While this is largely recapturing the lost output of the disastrous 2018/19 crop, the recovery in output is still welcome.

In Brazil there are expectations of a mega crop. It’s the ‘on’ year in the biennial production cycle, and further to that, weather has been nearly perfect for crop production. Although there was perhaps not as much rain towards the end of 2019, from January onwards it was steady and in the right quantity. This is salient as it’s during this period that the plants need plenty of nutrition and water to help with the maturation of the cherries. In Cerrado, Daterra Farm experienced a flowering in September and October, which were 25 days apart. Early harvest cuppings carried out by their QC team indicate quality is very good. Some of the earlier harvesting exotic varietals have already been handpicked and are exhibiting a nice complexity. Weather aside, the other bit of good news is the absence of any major problems relating to plagues and diseases. The percentage of beans attacked by the coffee borer beetle has significantly reduced and it looks to be much lower than the previous 2 crops.

Although there is lots of good news, as we have mentioned earlier in the report, Covid-19 presents its own set of challenges. Due to travel restrictions in Cerrado region, Daterra has decided to hire fewer temporary workers from outside of Minas Gerais state and focus on hiring workers that live more locally to the farm. One of the biggest challenges is variances in regulation; the President, Jair Bolsonaro, is constantly pressuring state and municipal administrations to cease the lockdown, and some states are taking quite different approaches than others. At the end of the month the Real, hit a record low against the US Dollar, surpassing the 5.70 level many thought it would not break through. With the resignation of Sergio Moro (Minister of Justice for the Bolsanaro government) following the dismissal of the general director of the Federal Police, tension remained high. This has fuelled further political uncertainty and the big question is whether Bolsanaro can deal with the pension problems looming over him.

Thanks to Ubeimar Magon Pacheco, Juliana Sorati and Rahmah for their updates this month.

We hope you enjoyed this report and see you in a month!