April was a critical month in the Brexit calendar and on the 11th of the month, the European leaders granted the UK a six-month extension to Brexit until the 31st October. Although the ‘Mobot’ did not triumph, it was a great London Marathon this year and the Kenyan Eliud Kipchoge, the fastest man ever over 26.2 miles, was a worthy victor. In this report, we head to some of the bigger coffee origins and found out what is happening in Brazil, Honduras and Vietnam.

The July terminal closed the first day of the month at 1399 $/mt and finished the month 35 $/mt lower at 1364 $/mt. The majority of media coverage has focussed on the low Arabica price, but the Robusta market has lost nearly 10% in value since the beginning of the year when it was over 1500 $/mt. The widely held view is that this low-price environment is not set to change in the short term.

As you can see from the graph below, March was a more turbulent month than April for both GBP/USD (orange line) and GBP/EUR (purple line). Pound Sterling gained against both the US Dollar and the Euro in the opening few days of April, and then a bearish sentiment saw Pound Sterling lose the value it had gained and then continue to lose more value. By the final week of April, it slid to a level of 1.29 (GBP/USD) and 1.15 (GBP/EUR) respectively. However, the last few days of the month saw a rally, with the Pound bouncing back and strengthening to a finish of 1.30 and 1.16. 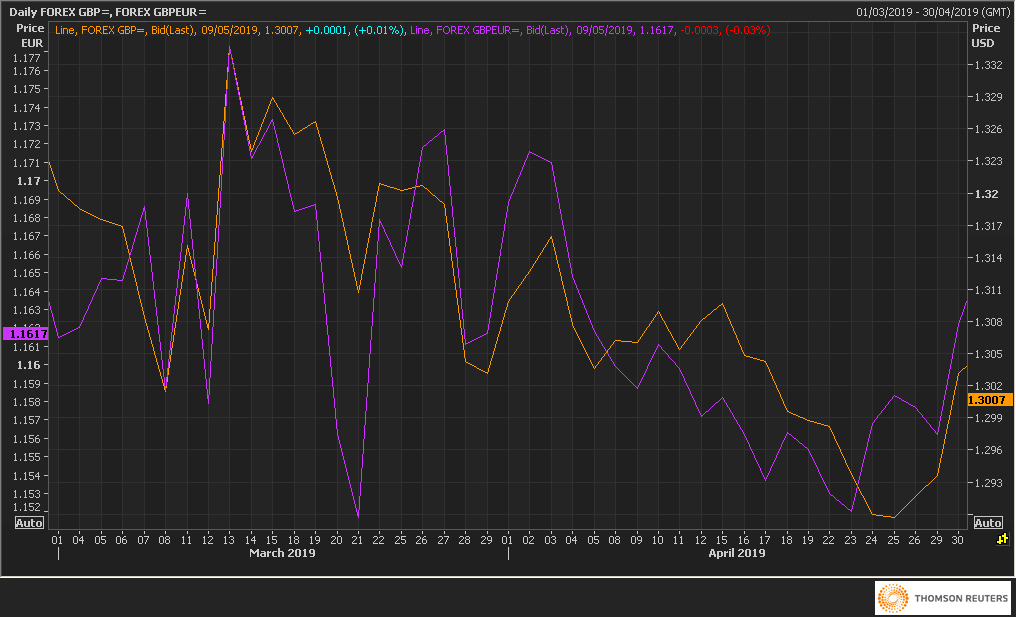 Numerous forecasts for the 2019/20 Brazilian crop were released throughout the course of the month – with a spread of 10 million bags on how much Arabica will be produced (between 32 and 42 million), hopefully by July we’ll have a more accurate picture!

The FNC in Colombia continued to debate the relevance of the NYC and opined that it is too closely tied to Brazilian coffee production. Roberto Velez, the head of the FNC, estimates that the break even FOB price in Colombia is 150 c/lb, and the break even farmgate price is 115 c/lb.

Weather in Vietnam was hot and dry. April is typically the hottest month of the year but this year has been exceptionally hot and there are concerns that there could be an ensuing water shortage.

As you are aware, crop volumes in Brazil have been growing and growing to the extent that we referred to the current crop (2018/2019) as a ‘monster’ several months ago. But what about the next crop? Harvesting has already begun. From a historical perspective, harvesting tends to start in May in Brazil so this year is atypical, and not just because of the timing of the crop.

The talk of the town is the variation in maturation. Lack of rain during the flowering and maturation stage, and the presence of rain during the normally dry season has resulted in irregular maturations and has left many farmers unsure when to start harvesting without losing too much quality. South Minas and Mogiana are some of the most affected regions, with trees in those areas showing an even split of the entire life span of a cherry: green, mature, raisin and dry. We might also see an uptick in the volume of Rio Minas produced, as more cherries than normal are falling onto the ground with high winds observed of late.

At Daterra farm in Cerrado, they started harvesting at the beginning of the month and also noticed evidence of the wider trend of irregular maturation. The main issue with this is that selective handpicking has to occur more often so that none of the mature beans are missed. This risk is mitigated by mechanical harvesting on the larger lots, but this also needs to be performed more as the harvest will be further stretched out. Both outcomes increase the cost of production for the farm. In spite of these challenges, quality is expected to be good, with the first cuppings showing promise. Volume is predicted to be down on the 2017/8 crop, although it is still expected to be large for an off year in the Biennial cycle. The Brazilian Real (BRL) continues its volatility against the US Dollar, and since the majority of agricultural inputs (fertilisers etc.) are priced in US Dollars, the decline in the value of the BRL will increase costs in the long run. Differentials are expected to rise.

Coffee production in Honduras continues to grow and it remains the largest producer in Central America by a large margin. According to the Honduras Coffee Institute (IHCAFE) more than 10 million sacks of 46kg will have been produced this harvest, which will be a record year. Certain exporters and cooperatives we have spoken to think that these numbers are somewhat inflated. Only time will tell. Even though it has been a large year in production terms, there has not been much cause for celebration. Coffee producers face numerous challenges and the principal one is the low coffee price. During our trip out there in March it was a common sight to see producers leaving cherries on trees because it was not worth picking them. In efforts to cut costs, producers have reduced farm maintenance and have in many cases, foregone fertiliser. This does not bode well for next season. The contrast between this crop and the next could be stark.

This season has been characterised by great quality and a near absence of phenol. Although the crop started late, it came in fast and the majority of quantity was handed in to mills in January and February. Many producers are hoarding and warehouses remain packed-both at export and farm level. Productivity was high this season, and the big challenge will be how to manage the expected drop in yield and also to avoid defects such as phenol coming back to the table like 2017/18.

The 2018/19 crop has been tough for Vietnamese coffee farmers due to the low price climate. The drop in price has caused farmers – especially in the central highlands – to change to other crops such as jackfruit, durian, passion fruit and local herbs and nuts like noni and sacha inchi. Farmers that stuck with coffee are unwilling to sell at current levels and buyers are also wary to buy too much quantity as they expect the price to drop further. People are tentative and not sure where this market is going. Like we mentioned in Honduras, many farmers’ warehouses are full and are only selling what they have to cover daily expenses. Everyone at origin remains bullish, which is in contrast to speculators and roasters, who remain bearish.

The good news is that quality continues to increase and the market for speciality Robusta is growing. This was the first year we bought some honey processed Robusta from Vietnam and it cups much better than the standard wet polished process. Coffee blooms from the first quarter of the year, however, they have been uneven. There is concern that what is happening in Brazil might also occur in Vietnam, and like in Honduras, Vietnamese farmers have cut back on fertiliser.

The common trend throughout these coffee origins has been that the more variable climate and low coffee price has had a large negative impact on coffee producers and is something that will continue to be a challenge in the medium term.