Coffee prices have fallen sharply since late last year and during the month of April this trend continued. The 1st day of the month closed at 140.25 c/lb and the last day closed at 133.40 c/lb representing a 4.89% loss in value during April. In March coffee futures lost 4% in value so the last 2 months have seen a sizeable fall. There are mixed reports on the forecast of the Brazil 17/18 crop and importantly how much carry over stock there is left to shift there. With global consumption rising and production expected to fall, many commodity reports are positing now is a good time to go long with coffee. Surely an unstable period at the moment as many international traders are waiting for the market to go long and for a big price increase to ensue.

Robusta prices fell more than 13.31% in April, showing a significantly larger loss than Arabica. Many large funds have seemingly overbought and with high stockpiles in Vietnam and Indonesia, the prices are oversold on technicals, indicating the prices dropped too fast. Prices on Brazilian Conilons have fallen with the start of the harvest and there seems to be a strong bearish sentiment on Robusta. In Espírito Santo, the main coffee producing region in the country, prices fell more than 8% on April.

£ Sterling has recovered against the US Dollar and the month finished with GBP/USD trading in the 1.28/1.29 region. Coupled with the value of the coffee market falling, this had a big impact on £/mt prices of coffee falling. GBP/EUR finished the month in the 1.18  area, not representing too much of a change since the month began with a rate of 1.17. Brexit, Scoxit & Mr Trump dominating the news. Certainly a volatile triumvirate. 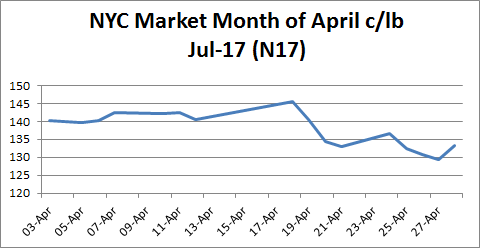 According to Cecafé, Brazilian exports fell 14.7% on March, Y/Y. With the harvest beginning now in Brazil, the March export was of 2.36 million bags.  Colombia’s March production increased 8.1% Y/Y. If you take the crop year as starting in October 2016, Colombia has exported just under 7.5 million bags to date, which is a 10% increase on this time last year. Interestingly, Robusta is attracting the attention of Colombian farmers. Colombia is already exporting lower grades, will we see Robusta exported before 2020? Scattered showers reported in Vietnam’s main producing region of the country, Dak Lak. They are experiencing below average historical precipitation that is expected to extend throughout May.

The crop is all but finished. Volume has recovered somewhat since last year’s devastating crop however coffee production is still recuperating. The Mexican government has isolated coffee as a key export good and thus is providing serious support to farmers for the first time in many years. Focus is on yield and output as the target is to export 8 million bags by 2020. Some argue the focus should be more nuanced with a focus on both quality and quantity. Reports suggest varietals that are hardier with slightly less exciting cup profiles are being promoted but it is still early days.

The two main producing regions in Mexico are Chiapas and Veracruz. However, it is Nayarit state that we’re focusing our attention on here. They have a reasonably long harvest from October to April with the peak of the harvest in February/March. It’s on the western coast of Mexico and if you look on the map it is quite far north. We were there just last week looking at coffee destined for the UK being prepared for export. This year the volume has recovered but there were less stellar lots available. Luckily we managed to secure some but hopefully there will be more of this type of quality next year.

The current crop is over, with the last deliveries of beans likely to occur this week or the next. Now it’s time for the trees to rest and be ready for the upcoming crop.  Weather reports indicate that the rains could arrive earlier than normal this season. Final crop volume is significantly below predictions and the final harvest won’t reach 1,85 M qq! Without any extremely large final deliveries, this is on track for the lowest crop on record. Most of the regions (except Turrialba) have been falling short of the first Icafe crop estimate earlier in the season.

It is no surprise that Tarrazu is down, since last year’s bumper harvest exhausted the trees there and they did not have time to recover fully for the harvest just gone. However, the bad fruit setting (due to late rains and an excess of rain after the flowering season) further exacerbated the expected drop and is reported to be the main factor that pushed the West Valley down too.

Also, strong rains in November affected the crop in the south and coupled with unexpected days of rain towards the end December and strong winds, the poor Costa Rican coffee plants did not fare well! Despite the big fall down of Tarrazu, its weight into the national production is increasing, reaching almost 40% of the total production. There is some good news. The 17/18 harvest is predicted to be good in terms of quality and quantity. 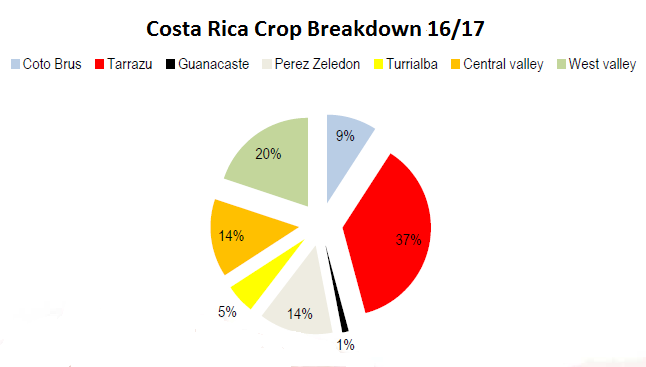 The Colombia crop can be confusing as many sources state that the main crop is September-December with fly crop April-June. However, depending on the producing region and the location of the cooperative/estate, this can be inversed. So always check with the relevant source! The current harvest continues to progress although crop development is a bit slower than expected in some regions, particularly in Cundinamarca and Huila. Reports suggest that in some growing regions fewer cherries are reaching optimum ripeness. The flowering process in other regions is stable and there seems to be no cause for concern at the moment. However, various weather channels in Colombia are highlighting the problem of potential drought in certain regions over the upcoming months. Watch this space.

We saw Sebastian from Cafe Granja La Esperanza in Seattle and he was telling us that quality is looking very good. The main crop for them is May-June with the fly crop in October/November. We landed some beautiful boxes of Pacamara Natural from Las Margaritas which arrived in March (harvested in November) if you are after something special. They are taking more control over the supply chain and are in the process of setting up a new dry mill in Caicedonia (currently they use a dry mill not owned or managed by them). This will give them more control over the export process. They have also hired 2 ex FNC agronomists who are working full time, so they hope that their quality and yields will increase over the coming years. Things are getting even more exciting in Southern Colombia!