In February, The Economist Intelligence Unit predicted a 2017 Arabica average of 170 c/lb. As we can see from the graph above, it never got close to reaching this level and, despite a few rallies in August and October, steadily fell throughout the course of the year. The market closed on the 3rd January at 137.40 c/lb and closed the year at 126.20 c/lb, representing a 8.15% decrease of 11.20 c/lb.

The low New York price served to lessen the impact of the weak Pound against the Dollar. 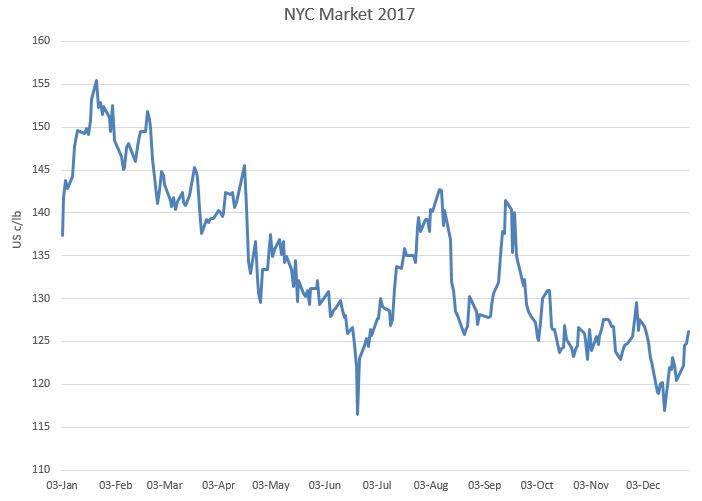 A year of coffee

In January, Trump and his executive orders were the talk of the town, dominating not just coffee but all markets. Conab released its first estimates of coffee production in Brazil for the 2017/18 crop year, projecting a crop reduction of 10% compared to 2016/17. After the disastrous Conilon (Brazilian Robusta) crop of 2016/17, roasters in Brazil were demanding the importation of Vietnamese Robusta to use as a substitute for Conilon in their blends. In the end, nothing changed, but Brazil came rather close to being an importer as well as an exporter! GBP/USD was trading in the 1.23-1.25 range, one of the lowest points of the year.

February brought adverse weather to Vietnam and Kenya: too much rain in the world’s biggest Robusta exporting nation and too little rain in East Africa. Prices surged in both countries as the weather conditions restricted the flow of coffee coming to market. All talk had been about Brexit in January but Scoxit crept into the narrative, which only served to increase uncertainty surrounding the Pound Sterling.

Article 50 was triggered on the 29th March by UK Prime Minister Theresa May. There was some downward pressure on Sterling but not as much as many had anticipated. Guatemala coffee was being offered at extraordinarily cheap prices. This was driven by fewer exporters in the market as the government cracked down on certain tax practices that kept many exporters out of the game for the 2016/17 crop. Reports came out predicting that Vietnamese Robusta exports would be 20-30% down on the previous harvest. Serious flooding occurred across the central highlands, showing no signs of respite.

There were harvest delays in Colombia throughout the month of April. Crop development was slower than expected in key regions but the quality was good. The final figure came in from Costa Rica and the 2016/17 crop was the lowest crop on record, with most growing regions falling short of the early ICAFE estimates. Honduras was on track to have a large crop, with whisperings that it could even reach 8 million bags (using 60kg for measurement purposes).

Problems in Colombia continued throughout May. The delay in the beginning of the rainy season and excessive rain in other producing areas caused problems with flowering, pushing back the harvest by 30 to 40 days. As a result, prices for Colombian coffee continued to rise. The Rainforest Alliance and UTZ, two of the world’s leading sustainability certification programs, announced their intention to merge later in the year. Top lots coming out of Nicaragua were in abundance. In past years sometimes it has been difficult to find coffees that reach 86 SCAA points, but this year some coffees managed to surpass the 90 mark.

June saw a more concrete proposal than those of previous years for reform of the Ethiopia Commodity Exchange (ECX). The big takeaway was increased traceability. We landed the first container of Myanmar coffee we have ever imported, with a mixture of coffees from 3 producing regions: Chin, Shan & Mandalay.

Throughout the month of July, dialogue centred on whether the Bank of England (BoE) would increase the base interest rate. Fears of frost dominated the news in Brazil, and while there were a few scares during the month, these never materialised into an actual cold front. Concerns over the availability of larger screen sizes once again meant that many exporters were reluctant to offer too much of some of the larger screen size grades. The main harvest occurred between late April and early June in Rwanda, proving to be of decent volume and of high quality. We sourced some very interesting lots from a new washing station, Kinini, in the Northern District.

Although the 2016/17 Vietnamese Robusta crop hit a 4-year low, reports in August suggested that 2017/18 would be a bumper crop. Differentials remained high in Colombia, with no signs of decreasing.

The news wasn’t so good in Brazil: September saw serious dry spells in central regions, with some crops starting to bloom in August, atypical for many areas across the coffee belt. However, it wasn’t all bad news; reservoirs in Espirito Santo (the country’s main Robusta region) that were drained because of the drought in 2015/16 were reported as nearly back to pre-drought levels. First deliveries from the harvest in Southern Colombia produced some stellar coffees, particularly from Cauca.

October was not a good month for Sumatra coffee with export data 50% down on the same month the previous year. Many exporters were short and therefore prices surged skywards. After a difficult harvest the year before, data coming out of Peru indicated that the harvest was going to be big, and of high quality. It was the first time the Cup of Excellence was brought there and it was a great success: the two winning lots came in at 92.25 SCAA points and feedback from the judging panel was very positive.

Estimates from ICAFE in November predicted the 2017/18 Costa Rica crop to be 15.43% up on the previous harvest. In Kenya, it was a different story. Forecasts for the main crop were in the 25,000-28,000 tonne region, which made the 2017 crop year (calendar year) the smallest on record. This tight supply (25% down on the previous year) caused prices to surge. Coffees that are considered solid average coffees were reaching prices that have traditionally been reserved for only the finest Kenyan coffees. The BoE raised interest rates for the first time in a decade, increasing the benchmark rate from 0.25 to 0.5 percent.

December saw the Pound strengthen quite considerably against the dollar, reaching the lofty heights of 1.35. in Nicaragua the harvest was in full swing, with more coffee having been harvested than normal at that stage in the year. The Indian harvest is well underway, with promising signs of a good crop.