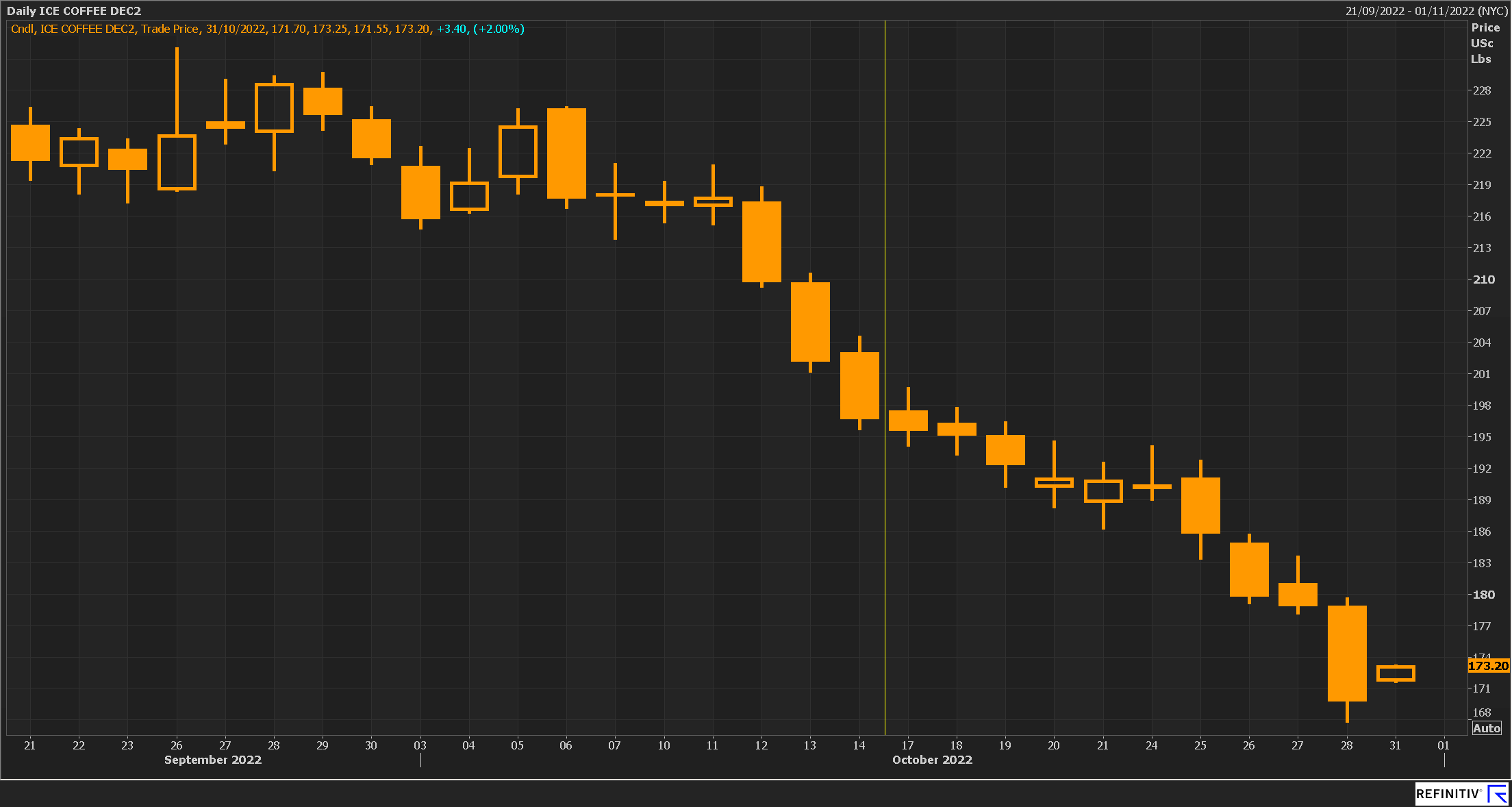 After the steep downward trend we saw in the NYC in the previous fortnight, this reporting period followed suit, with the market steadily continuing on its bearish path. Monday 17th October the market opened at 197.50 c/lb and peaked at 199.70 c/lb, the high point of the whole period. The low point on that Monday was 194.05 c/lb, but some ground was regained before market close at 195.55 c/lb. The subsequent days followed the same pattern, steadily stepping downwards. The trend sustained as funds continue to exit the marketplace and general concerns about the global economy added fuel to the bear’s fire. Although, the Brazilian weather forecast, predicting dry weather when rain was needed tempered the market, preventing any serious drops.

As we entered the second week of the fortnight, Monday 24th October saw a small uptick in the market. Market opened at 190.05 c/lb, hitting a high of 194.15 c/lb and closing at 190.40 c/lb, just 0.35 c/lb above opening. However, the following day saw any hint of a reversal dashed. The next four days followed suit, with significantly bigger daily drops than the week before. Friday 28th October proved the biggest trading day of the period. Opening at 178.85 c/lb, with highs of 179.65 c/lb and a low of 167.75 c/lb, closing at 169.8 c/lb, closing out the fortnight with a range of 11.90 c/lb. The wake of new Covid lockdowns in China triggered fears over a deterioration in demand, which were already brewing in Europe as we head towards recession. Escalation of the war in Ukraine further added to bearish fears.

The CFTC’s COT report with the cut-off Tuesday 18th October saw weak price action from the off with price breaking below the ~205.00 support level to close down for five consecutive sessions to settle down 17.65 or 8.5%.

The CFTC’s COT report with the cut-off Tuesday 25th October witnessed Arabica prices maintained their recent downward trajectory. The Non-Commercial Gross Long position fell by 1,827 lots and the Gross Short increased by 6,363 lots. The Non-Commercial position switched from a Net Long to a Net Short position for the first time since 10 November 2020 where the Non-Commercial Net Long fell by 8,190 lots to now where it sits at 3,084 lots Net Short overall.

Certified US Arabica stocks further declined to 385,465 bags. Low certified stock numbers may have the power to override other fundamental pressures and cause a rally on the NYC, although we are yet to see the tide turn on the NYC’s bearish run. 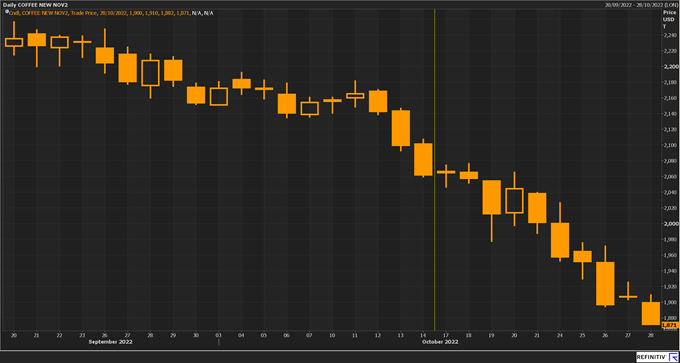 Once again, the London Robusta market has been playing copycat with the NYC, mapping a very similar downward trend and joining the teddy bears’ picnic. The period opened on Monday 17th October at 2067 $/mt and, after a day of fairly volatile trading with a range of 29 $/mt, closed just 3 $/mt lower at 2046 $/mt. The decline over the next two weeks was steadily steep, with Friday 28th October hitting the lowest point of the period at the close of 1871 $/mt, a significant 196 $/mt lower than the start of the period. Both the LIFFE and NYC have been affected by the same global economic fears and events, rather than specific events affecting the arabica or robusta crops, explaining, to an extent, why this fortnight they have been so closely aligned.

The weather in Brazil has been fortunately favourable. Reports of drier than ideal weather in the week of 17th October tempered the bear run of the market, but good rainfall in the following week eased any concerns. This rain is expected to maintain the 23/24 crop well with hopes of a sizeable harvest still intact. As of 31st October, the Brazilian presidential elections have come to a close, with left-wing Lula narrowly beating the far-right incumbent president Bolsonaro with 50.9% of the vote. Since Lula’s victory the Brazilian Real has cautiously gained some value against the USD and is currently trading at 1 USD to 5.29 BRL.

Colombian prices have continued to fall over the last two weeks, with differentials for some coffees currently sitting almost 20 c/lb lower than they did just a couple of months ago. This decrease in pricing has largely come about as a reaction to many roasters having to step away from Colombian coffee due to the sky-high prices, which effectively priced themselves out of the market. This decrease, plus the positive direction we have seen Sterling take recently strengthening against the USD, may well bring Colombian coffees back in budget!

In an unexpected turn, it looks like weather forecasts in coffee-growing origins are looking largely favourable across the board! This is certainly true of Ethiopia, with the forecast looking perfect for setting the 22/23 harvest in good stead. The crop is hoped to be of higher volume than 21/22 and expected to be of higher quality as well.  However, farmgate prices in Ethiopia remain very high and the cost of production keeps going up. The political strife remains unresolved which may well cause more internal instability and mean difficulties may arise in transporting coffee within Ethiopia. 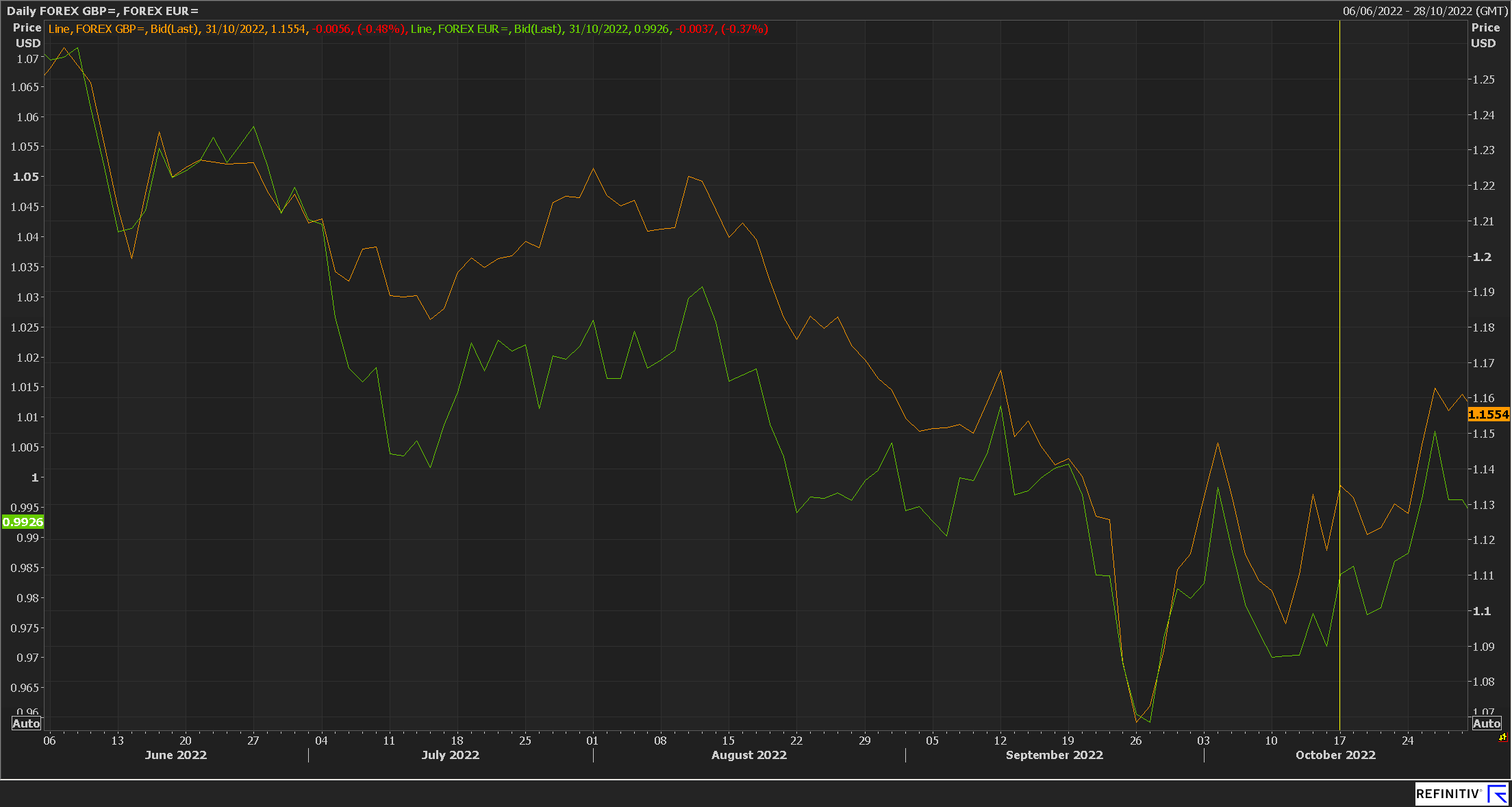 The biggest news in the UK these past two weeks was, of course, Liz Truss resigning as Prime Minister. Her brief stint in office caused a great deal of uncertainty and saw the value of the Sterling tumble to historic lows. The extent to which Truss had directly affected the value of the pound can be seen on the chart above. Notably on 20th October, the day she resigned, the Cable began running up that hill, four days later, when Rishi Sunak was announced to be her successor, it reached the summit, hitting highs of 1 USD to 1.16 GBP, the likes of which we hadn’t seen in over a month. Whilst this has tapered off a little, it certainly seems like the markets have more confidence in Rishi’s leadership.

Whilst the drama of current UK politics unfolded, over in DXY land the dollar index had slightly soften, hitting lows of 109 on 26th October. However, it regained some ground, back to 111, ahead of an announcement from the FED that is due on 2nd November, and it looks like the hawks are in the sky with the markets predicting another 75 bpts hike in interest rates.

The Euro continued to struggle under the 1:1 line for much of the period, facing the continued pressure from the escalation of war in Ukraine, the looming threat of recession and inflation hitting record highs of 9%. Although it did briefly pop up above parity on 27th October, for the first time since 13th September, as the ECB announced a further hike in interest rates of 75 bpts, but it barely managed to gasp for breath before dropping back below, closing the period at 1 USD to 0.98 EUR.