Hello. Welcome to the fortnightly DRWakefield Market Report for the period covering Monday 15th of November to Friday 26th of November. This report touches upon the Arabica and Robusta coffee futures market, currency pairings and news from origin. For clarity on any terminology used in the below coffee market report, see our Market Report Terms page. 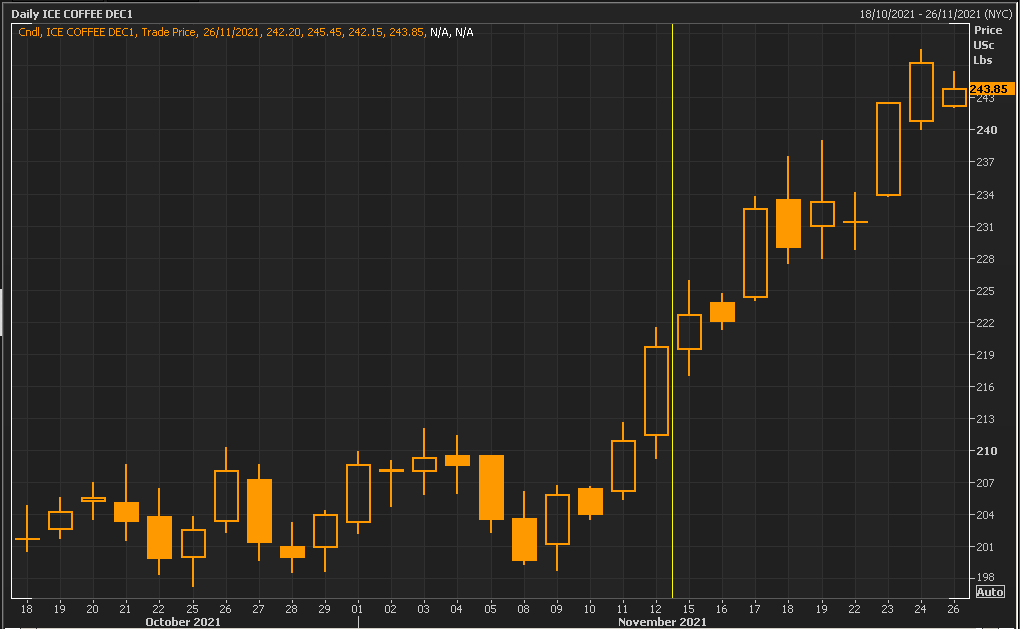 Yes you guessed it, the market went up! Arabica futures opened at 219.45 c/Ib on the 15th of November and remained climbing until Wednesday 24th November, just before the American Thanksgiving feast. The largest jump in a day was on the 23rd November which moved 8.70 c/Ib. A new 10 year high was reached at 242.55 c/Ib and then was promptly beaten several times over. I probably don’t need to go into the reasons why the market is going up as I am sure you have read them all before, but I am going to mention them anyway. Despite good rains in Brazil, concerns over the trees still persist and Colombian exporters still indicate that they could witness defaults of their forward contracts. A record price of COP 17,344 (Colombian Pesos) per kg of parchment is being paid to growers, which at the current time is equal to US$4.33. The reporting period high was 247.55 c/Ib but it seems like a belly full of turkey eased peoples desires to buy, and the return of the market on Friday saw some downward pressure. The final figure of the day was 243.85 c/Ib.

Certified US Arabica stocks unsurprisingly took another decline as draw offs continued. They have now hit 1.60 million bags and look to drop further. The last couple of months have seen decreases of 0.3 million bags per month so just one more month at the same rate and by January it will be close to the November 2020 level. Robusta is following the same story and stocks are now at 1.78 million bags. Have you ever thought about how long the certified crop can sit around for? A point of interest, there are 0.45 million bags from 2016/17 and 100,000 bags from earlier than 2016. 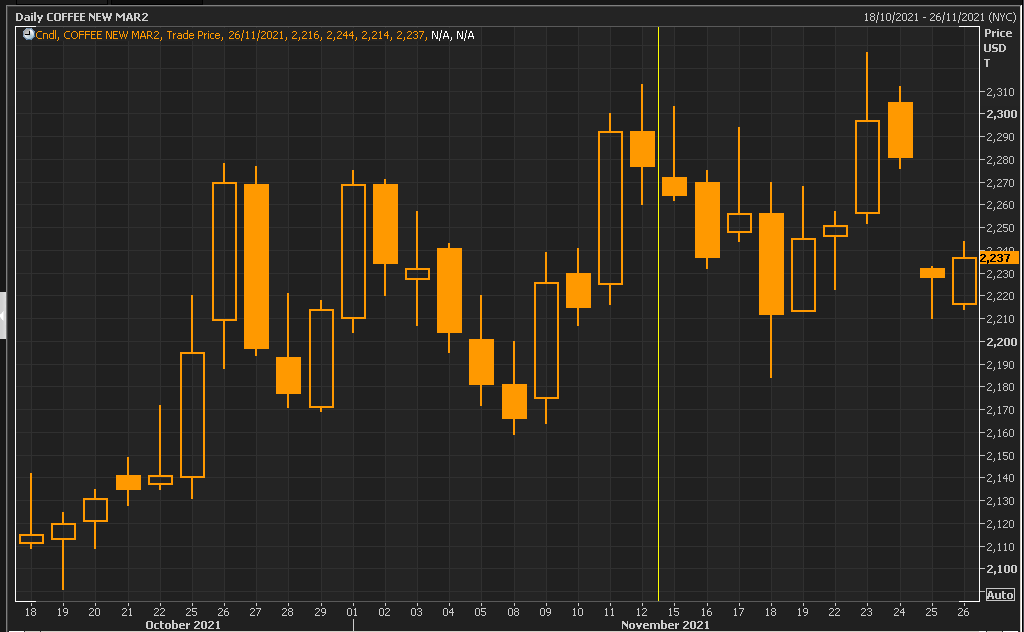 Robusta has not seen the same upward traction as Arabica in the last couple of weeks, perhaps a sign that speciality Robusta is a viable strategy? Robusta failed to attract much interest as the attention was on Arabica and the closing out of any open December contracts. Opening on the 15th at 2,272 $/MT the next two days saw it depreciate to reach 2,237 $/MT by 16th November, coincidently where it closed out of the period too. This is a modest figure when compared with the period low of 2,184 $/MT. It did take some ground back and tipped a new November high of 2,327 $/MT on the 23rd. There was a large gap down of 51 $/MT from the 24th to 25th November. This can occur because whilst the markets are closed, market participants are still sharing news and putting in orders to either buy or sell, meaning that when the first bell rings for the day the market will open at the level of the first trade and so can differ (and often does) from the closing level the previous day.

In Brazil a sequence of cold frosts has brought more rain to the coffees regions and this is expected to continue into early December. Continuing problems for the Brazilians caused the market to go into backwardation this week. This is where the price of a spot contract is higher than prices forward into the future. This does not occur that often as usually forward contracts include the cost of storage in the price.

Colombia dropped their predicted harvest volume for the 2021/22 crop down from 14.1 to 13.8 million bags. This figure has been largely impacted by reports from the Colombian Meteorological Society that there is a 90% chance that La Nina will hit at the end of 2021 and the first quarter of 2022. This will cause an increase in rainfall which could damage flowering, impacting the subsequent crop.

In Honduras general elections took place on the weekend just gone. Exporters are expecting disruptions to last for a few days or perhaps weeks. Some exporters are aiming to get all December shipments moving after the 15th, with the hope that they will miss the worst of any chaos. So far Honduras has managed to get off quite lightly in the grand scheme of world shipping problems, but more exporters are planning for a decline in the number of available containers and port delays. 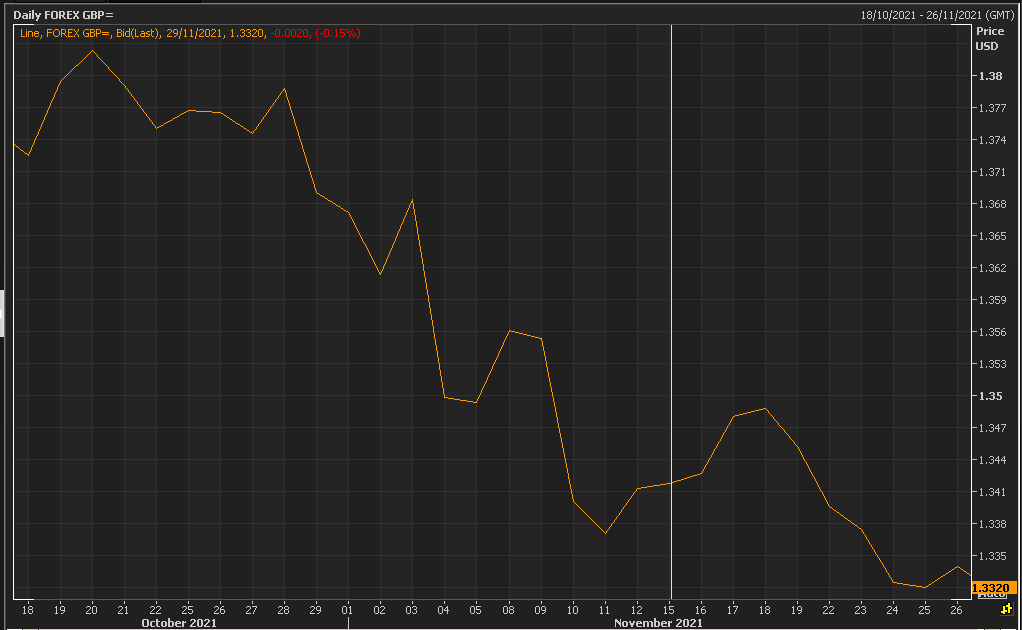 The Cable began the fortnight at 1.342 and rose to 1.347 after news that the end of the furlough scheme hasn’t (as of yet) led to a rise in unemployment levels as was feared by many. Inflation figures of 4.2% October lead to further rises against the dollar and other key currencies. One of which was the Euro, as it looks like the Bank of England will raise interest rates much sooner than the European Central bank. The Pound’s rise against the Greenback wasn’t to last long however and a loss in value ensued to touch bottom, 1.332, on the 25th November. A minute pick up saw the pound close the period at 1.333. The Pound could have gained more on the Dollar due to the fact the US was closed up for Thanksgiving but worries about the new Covid variants subdued desires to purchase Sterling. 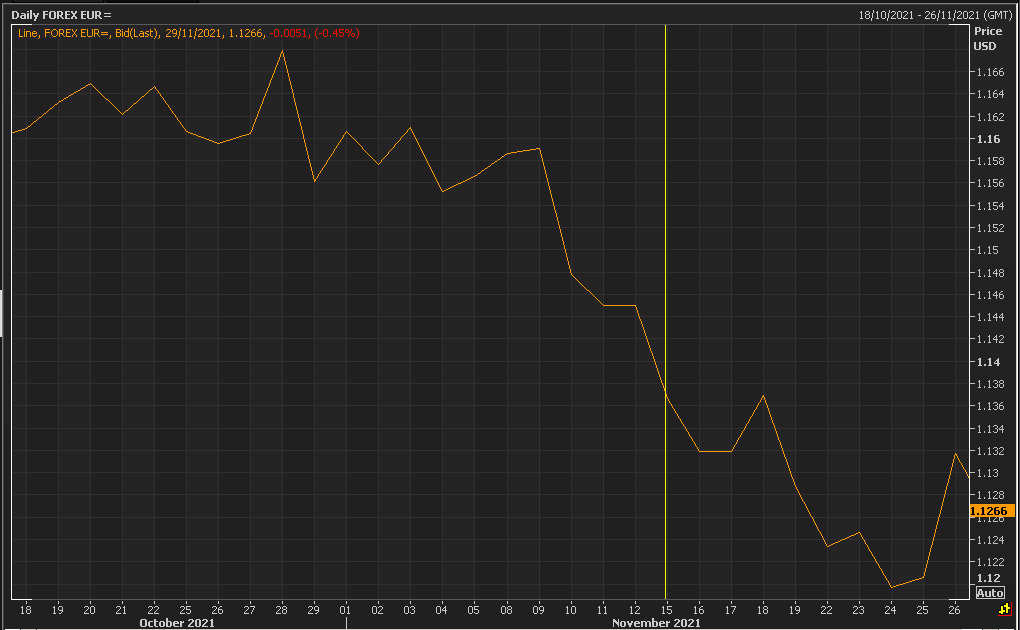 On Monday 15th of November EUR/USD was on a down hill slope from the previous week, starting off at 1.136 as upcoming data releases and European Central Bank speeches loomed. Despite a brief spike on the 18th the value of the Euro steadily fell for 10 days as fresh Covid restrictions were introduced in the Netherlands and Austria and Covid rates are back on the rise. A high number of cases coupled with supply chain issues and high inflation rates have caused worries that a full economic recovery could be hindered. From the 25th the Euro was able to gain on both the Pound and the greenback as the new variant Omicron caused buying of global reserve currencies. The Euro managed to climb up to 1.132, which is still significantly lower than October levels.

We hope you enjoyed this report and see you in two weeks for the next one. Till next time coffee folks!